As the negotiators of the Paris Agreement meet in Katowice, Poland, at the Twenty-Fourth Conference of the Parties of the United Nations Framework Convention on Climate Change over the next week and a half, they face an important question: What can they do to put flesh onto the skeletal deal and to encourage countries to further reduce their carbon footprints over time?

The Paris Agreement’s combination of both a top-down and bottom-up approach was key to its success. The top-down elements include the requirement that countries state their national contributions every five years, a schedule which is binding under international law for those jurisdictions that have ratified the agreement.

The key bottom-up element is the set of Nationally Determined Contributions—the carbon reduction goals countries committed to meeting within a certain timeframe. Those goals are not binding under international law.

This dual structure created one of two necessary conditions for the ultimate success of the Paris Agreement–adequate participation. Countries accounting for 97 percent of global emissions signed on to the agreement. Compared that to only 14 percent of emissions under the Kyoto Protocol.

The other necessary condition is collective ambition. Unfortunately, the voluntary nature of the carbon reduction goals – which is precisely what facilitated the exceptionally broad scope of participation – works against adequate ambition to address the global commons phenomenon, which is plagued by free rider problems.

That’s where carbon markets and cooperation among jurisdictions potentially come in.

International cooperation under the Paris Agreement

Cooperation among countries can lower the cost of reducing carbon emissions, which might be essential for the ultimate success of the Paris Agreement. This cooperation could take the form of policies that allow emissions reduction efforts to be redistributed through a carbon market.

Cooperation among countries can lower the cost of reducing carbon emissions.

Such “international linkage,” as I call it, is typically framed between cap-and-trade systems, but regional, national, and sub-national policies will all be very different. They will include not only cap-and-trade, but offset systems, carbon taxes, performance standards, and technology standards.

The good news is that building a connection on mutual interests, between the various policies is feasible, as I have written about in the past at my blog, drawing on my research with Michael Mehling (MIT) and Gib Metcalf (Tufts University).

The even better news is that one part of the Paris Agreement already lays the groundwork by enabling countries to cooperate on market-based solutions: Article 6.

The promise and problems of Article 6

In the negotiations that led up to the 2015 Paris climate talks, it was by no means clear what role–if any–market mechanisms would play in the Paris Agreement. In the negotiations, the European Union, Brazil, and other countries played crucial roles in generating the compromise that became Article 6. 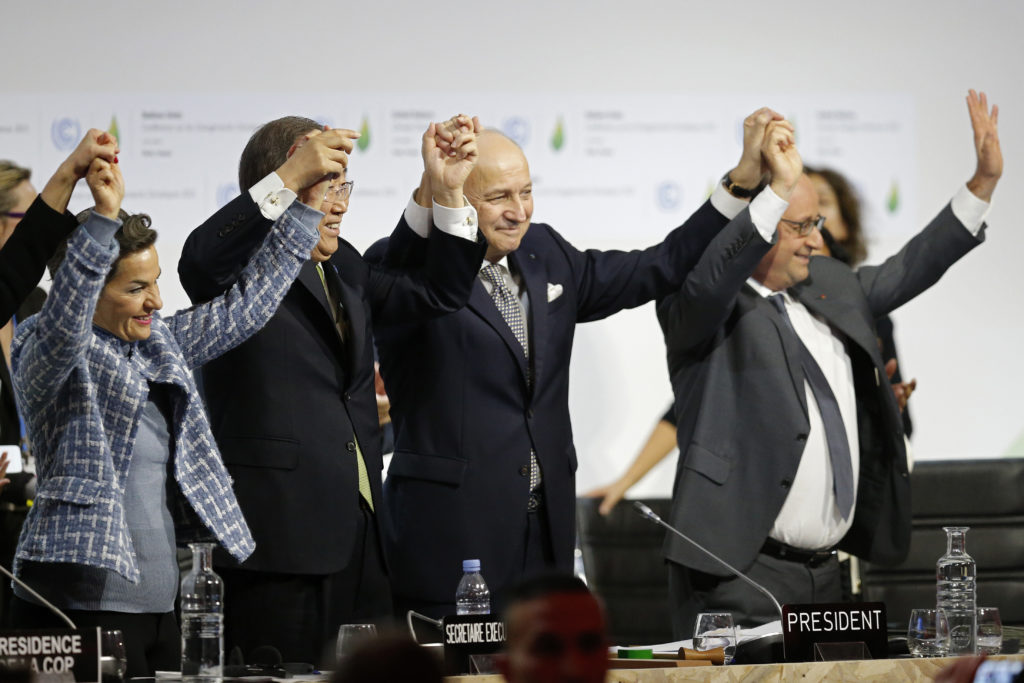 National and international leaders at react during the final plenary session at the World Climate Change Conference 2015 near Paris on December 12, 2015. The agreement garnered widespread support from nations in part because the carbon reduction goals were voluntary. Photo by Stephane Mahe/Reuters

This came about despite the entrenched opposition of a small set of vocal countries — including some Latin American socialist economies — who wanted nothing of the kind to appear in the Paris Agreement. They succeeded in keeping the word “market” out the Paris Agreement, but the concept and the potential reality is very much there!

The provision for markets and international cooperation is implicit in Article 6.2, which allows for cooperative approaches involving what’s called “internationally transferred mitigation outcomes.” Those internationally transferred mitigation outcomes are vague and without definition, but as accounting measures, they could allow one country to pay another country to lower emissions but count those lower emissions toward the first country’s reduction goals, for example.

Despite the opposition, most parties to the Paris Agreement are supportive of cooperative approaches. More than half explicitly mentioned carbon markets in their respective national plans.

Most of the variation between the countries’ plans do not present insurmountable obstacles to achieving cooperation, but some do present real challenges and could use specific guidance from the Paris Agreement.

Most of the variation between the countries’ plans do not present insurmountable obstacles.

Accounting provisions would prevent double-counting of carbon reduction actions through the international trading systems. Unfortunately, some countries want the agreement’s guidance to go beyond fundamental issues of accounting.

Some countries have proposed, for example, that all trades must reduce net emissions. This sounds very much like the U.S. Environmental Protection Agency’s 20 percent rule in its 1970s Emissions Trading Program, which required that net emissions fall by 20 percent with each trade. This was a tax and an inhibition on trading, and the result was that virtually no trading occurred.

The general problem is that if the guidance extends much beyond basic accounting rules, restrictive requirements could actually impede effective cooperation. True to the nature and spirit of the Paris Agreement, less can be more!

In rural Appalachia, can health care become the new coal?