Why a Nobel laureate in economics thinks bitcoin is toast

The price of bitcoin has been ticking back up after a precipitous drop from $6,500 at the beginning of the month to $3,600 this week. That low marked an almost 40 percent decline over the past month, 60 percent over the past year, and 80 percent from its height.

My own .0016 of a bitcoin, purchased for $20 to illustrate such transactions for viewers like you last April, was worth $13 after transaction costs. It’s now worth about $4.

In just the last 48 hours, the cryptocurrency has gained back some of its losses and was valued around $4,300 as of Wednesday afternoon. 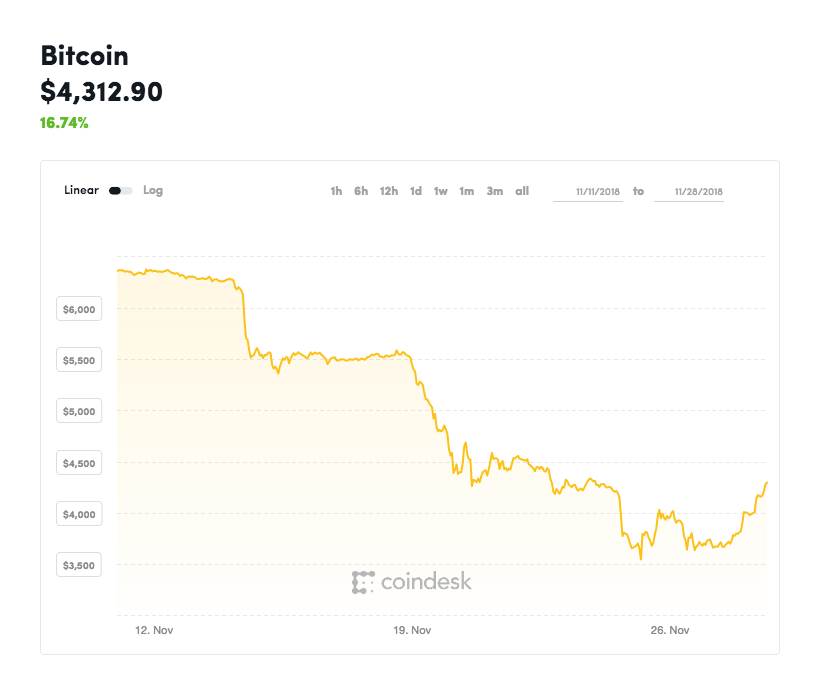 So what should we take away from bitcoin’s turmoil?

Back in the fall of 2013, the eminent business historian Richard Sylla told the NewsHour that he could eventually see bitcoin becoming as pricey as gold or worth nothing at all. At the time, one bitcoin was selling for about $125, a seemingly extravagant price given that a coin cost just $15 bucks at the beginning of that year.

Bitcoin has since far surpassed the value of gold. Even with the recent drop, one bitcoin is still worth well more than three ounces of gold.

The fact is, after-the-fact investing is the only sure route to riches, especially when it comes to almost entirely speculative investments. And that’s what bitcoin would seem to be. It remains a pain to buy, sell or safely hold — see our explanation from last April or the story of the man who threw away the hard drive that held the codes to his bitcoins worth $80 million. He has decided to mine the landfill where he thinks the hard drive may have ended up.

And because of bitcoin’s price volatility, it’s even more of a pain to use as currency, its primary raison d’etre. That is except of course its use for nefarious purposes because it’s supposedly untraceable and therefore more suitable than most alternatives. The mayor of Plattsburgh New York told me that arrests for contraband cash coming across the Canadian border are down sharply since the advent of bitcoin.

This sort of volatility was not supposed to happen. Bitcoin and other “cryptocurrencies” were touted as alternatives to the feckless “fiat” currency reckless governments supposedly churn out; “fiat” as in “let there be.”

“Fiat lux”, said the creator, according to Abrahamic tradition: “let there be light.” And there was light. “Let there be dollars,” says the Federal Reserve, and lo, dollars materialize out of thin air. Indeed the sky itself is barely the limit. And if you can keep creating more dollars, the argument goes, or euros, or yen, yuan or won, they will lose their value through inflation — eventually, pretty much all their value.

“Arrantly irresponsible,” cried the skeptics. There had to be a safer, more credible way to mint money than just leaving the job to governments. Enter, stage center, bitcoin: a currency controlled — like gold — by no one, but better than gold, since there’s an absolute limit on the total number of bitcoins that can ever be mined. Bitcoin — or maybe some other cryptocurrency — would replace fiat currencies as the coin of all realms soon enough, safe from the ravages of inflation.

WATCH: The how and why of buying bitcoin

This spring, I had lunch with a skeptic of a different persuasion: a bitcoin skeptic. His name is Robert Merton, and he won the Nobel Prize in Economics in the 1990s for his contributions to investment theory. Bitcoin’s price was dropping at the time, but still more than double what it is today. Merton was acerbic.

“It’s not a currency!” he insisted.

Unfortunately for investing viewers, perhaps, we never got around to it. But with bitcoin continuing its descent, I wrote to ask him what he was thinking now. And here’s his answer:

“The only possible legal tender currency is one controlled by government,” Merton writes. “Fiat but legal tender currencies actually have intrinsic value because by law they can be used to settle all tax and other payments to the government and they MUST be accepted as payment for obligations denominated in that currency.”

Now it so happens that Ohio just became the first state in the country to accept bitcoin for a variety of taxes, though only businesses are eligible thus far. But it would be a stretch to say that as Ohio goes, so goes the nation.

The problem with bitcoin at the moment: It is not a government-controlled currency.

The problem with bitcoin at the moment, despite Ohio, is just what its champions decry: It is not a government-controlled currency. And therefore, asks Merton, who is responsible for the value of our currency if tomorrow morning all the bitcoin screens go dark?

And suppose governments like the U.S. or China or the EU were to declare it illegal? Indeed, with its use by terrorists and criminals to move money, “governments have good reasons to make it illegal,” Merton writes. “Recall that owning gold coins or bullion by U.S. citizens was illegal in U.S. from 1933 to 1975 and so gold could never have been a currency in the U.S. during that time.”

Moreover, governments are now considering their own rival to would-be currencies like bitcoin: Central Bank Digital Currencies, aka CBDC’s. Here’s one of my favorite skeptics, NYU economist Nouriel Roubini, who called the real estate crash of 2008 on the PBS NewsHour — in 2006. What Roubini was thinking about bitcoin just last week is summed up by his headline: Why Central Bank Digital Currencies Will Destroy Cryptocurrencies.

But if all this is true, how can bitcoin still be worth anything at all, much less $4,000 a coin, up from pennies — or at least single-digit dollars — at conception not that many years ago?

“I believe that all but the most diehard bitcoiners have given up on bitcoin as a currency,” answers Merton, “and have changed its use to being a store of value. When asked what value it has, they point to gold,” which sells for far more than it would for a strictly practical, commercial purposes. If ever there were a clear example of speculation instead of investment, that is, bitcoin would be it.

“Indeed,” writes Merton, “[bitcoin enthusiasts] often call it electronic gold.” Does it use ridiculous amount of electricity to mine, as we detailed in a story last year? Sure, the bitcoin bunch point to the huge amount of energy that goes into mining gold.

But look, concludes Merton, “no one really has a good theory of the price of gold. It’s a puzzle. And so I believe it’s a sign of how desperate the bitcoiners have become that the only argument for bitcoin as a serious store of value is by analogy to something whose value we don’t understand its value!”

As for the safety of bitcoin as an investment, protected by the distributed network of computers that comprise the blockchain, “the idea that bitcoin or for that matter blockchain does not require trust is nonsense.” It’s based on a model of how things should work — a concept; a set of techniques. But everything can fail.

How do we know the blockchain model isn’t flawed? Or that it doesn’t have a backdoor by which the creator can come in and empty your account?

Merton’s final thought is a warning from another trendy cryptocurrency, Ripple, down more than 80 percent from its high.

“Ripple had to create a ‘referee’ to declare the blockchain valid instead of going through the entire chain each time because it was sooooo slow. But then one has to trust the referee.”

And so we end where the whole cryptocurrency craze began. Bitcoin, like any currency — like any store of value — is based on trust. Once that trust dissipates, who can say how much value is in the store?

I should add a postscript: this does not mean that blockchain — the technology behind bitcoin and the several thousand other so-called cryptocurrencies and applications out there — is similarly unstable. Blockchain is a way of using computers and the Internet to validate any sort of transaction, getting rid of the bureaucratic middleman. It’s a story of another newsletter. But it holds out great hopes for efficiency in a bureaucratized world.

Left: Bitcoin.com buttons are seen displayed on the floor of the Consensus 2018 blockchain technology conference in New York City. Bitcoin has lost about 40 percent of its value in the last month. iPhoto by Mike Segar/Reuters

Cheap power drew bitcoin miners to this small city. Then came the backlash