“Ask Phil,” aims to help older Americans and their families by answering their health care and financial questions. Phil is the author of the book, “Get What’s Yours for Medicare,” and co-author of “Get What’s Yours: The Revised Secrets to Maxing Out Your Social Security.” Send your questions to Phil.

Rising insulin prices are once again shining an uncomfortable spotlight on drug-company CEOs, who have been dutifully taking a public pounding before congressional committees. The latest shaming occurred yesterday before the House Energy and Commerce Oversight subcommittee, which has been looking into insulin prices.

There is little place for drug companies to hide, and they have responded by trying to shift blame to each other, with drug makers blaming the problem on pharmacy benefit managers (PBMs) and health insurers, and PBMs returning fire.

“Unfortunately, as a pharmaceutical company, we do not have the ability to control what an individual insured patient pays for his or her prescriptions. That is a function of the individual’s health plan benefit design,” said Douglas Langa, an executive at Novo Nordisk, one of only three companies that makes insulin in the U.S. Eli Lilly, Novo Nordisk and Sanofi make more than 90 percent of the world’s insulin and 100 percent of the insulin sold in the U.S.

Langa said PBMs, rather than his company, control whether rebates actually result in lower out-of-pocket costs.

“Manufacturers are increasing insulin prices for one simple reason: There is a lack of meaningful competition,” Dutta said. “In the absence of competition, manufacturers often set exceptionally high prices.”

Rep. Frank Pallone Jr., D—N.J., called out the finger-pointing in his opening remarks.

“So we are left with no accountability,” said Pallone, chairman of the broader Energy and Commerce Committee. “For the millions of people who are suffering in the system, these back-and-forth arguments are frustrating and unacceptable. Everyone seems to be coming out ahead here – except the patient.”

Anticipating their day before Congress, Express Scripts — a major PBM that was recently acquired by health insurer Cigna – said last week it would cap out-of-pocket insulin costs at $25 for consumers in drug plans that it manages and which Cigna insures. That’s about a 40 percent reduction from the average monthly out-of-pocket costs of $41.50 for their customers.

And just before yesterday’s hearing, Sanofi — one of the three U.S. makers of insulin – announced its own set of price reductions. Last month another insulin maker, Eli Lilly, said it would introduce a generic version of its Humalog insulin at half the cost of the branded version. In doing so, it said that while the list price of the branded version had risen by more than 50 percent since 2014, the net price it received had actually declined because of price discounts to patients and rebates to PBMs.

“Why couldn’t this have been done years ago?” Senate Finance Committee chair Chuck Grassley said in a statement after the Express Scripts announcement. “It shouldn’t take bad press and congressional scrutiny to get health plans, their pharmacy benefit managers and pharmaceutical companies to arrive at a fair price for a drug that’s been on the market for nearly a century.” He said much the same yesterday in response to Sanofi’s price cuts.

At first glance, insulin would seem a case study for showcasing what’s wrong with drug pricing. The product has been around for nearly a century, but until recently there have been no generic versions. Consumer prices have skyrocketed for the product that is literally required every day by millions of people in order to keep living.

Insulin may be a case study of how hard it will be to at least stabilize, if not reduce, runaway consumer drug prices.

About 1.5 million Americans with Type 1 diabetes must take insulin regularly or they will die. The cause is unknown and there is no cure. Nearly 29 million other Americans have less-severe Type 2 diabetes, and about 6 million of them also take insulin.

However, as revealed in the congressional hearings and numerous studies, fixing what’s wrong with insulin will not be easy. Republicans and Democrats have introduced several related bills, but it’s not yet clear if a divided Congress will be able to agree on a measure that would lead to meaningful changes and price reductions.

In this respect, at least, the story of insulin may also be a case study of how hard it will be to at least stabilize, if not reduce, runaway consumer drug prices.

Insulin sale prices nearly doubled between 2012 and 2016 and have kept rising. Consumer prices have not risen as much because of price discounts provided by the three manufacturers to pharmacy companies and shared with health insurers.

However, government kickback rules prevent Medicare from accepting such discounts, so Part D drug plans have absorbed ever-larger price increases. The government pays for most of the costs of expensive drugs, but there is no lid on consumer co-pays in Part D plans. So, as insulin prices have risen, so has out-of-pocket spending by Medicare beneficiaries.

Drug-company critics say these government subsidies represent a perfect storm by providing a guaranteed payment mechanism for over-priced drugs. Medicare enrollees are shielded from most of the impact of higher prices, and younger insulin users are also protected by generous patient discounts and payment-assistance programs that manufacturers provide. The reason manufacturers can afford payment-assistance programs is their knowledge that they will recover these funds, and more, from Medicare.

A recent study of Medicare insulin prices by the Kaiser Family Foundation found that Medicare Part D drug plans spent $13.3 billion on insulin in 2017, up more than eight-fold from $1.4 billion in 2007. In 2016, one-third of Medicare enrollees had diabetes, up from 18 percent in 2000. Part D plans heavily subsidize consumer out-of-pocket costs, yet these annual costs still doubled — to $588 in 2017 from $324 in 2007. 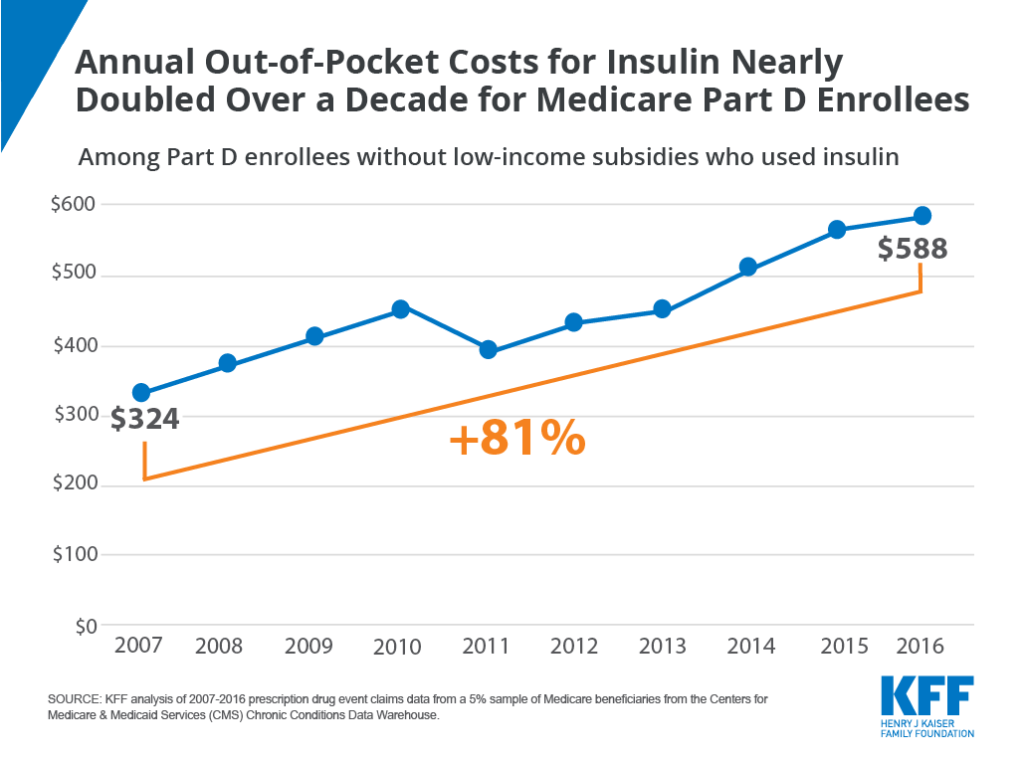 While hikes in list prices would seem to be solely the responsibility of the three manufacturers, they claim that the complex system of rebates and price discounts used by PBMs and health insurers have forced them to do so.

Oliver Brandicourt, head of Sanofi, told Grassley’s committee in February that more than half of the company’s gross sales were paid back to providers as rebates. He pointed out that the average net price of the company’s most prescribed insulin declined more than 30 percent since 2012 and out-of-pocket costs for patients with commercial insurance and Medicare increased 60 percent over the same time period.

READ MORE: Drug company CEOs admit prescription prices are too high. But will they change?

“In this case, not only are discounts apparently not being passed on to patients, but patients are in fact being asked to pay more when PBMs and health plans are paying less for the medicine,” Brandicourt said. “This situation defies logic and should not happen.”

The three insulin manufacturers are portrayed as monopolists with the market power to jack up prices on a product that hasn’t changed in 100 years. Again, they say the reality is different, and point to many product enhancements.

Brandicourt said Sanofi has introduced a new form of insulin called glargine, creating a time-release product that can be injected once a day via a pre-filled injection pen. The company says the product will help diabetes patients regulate their blood sugar without spiking insulin levels at certain times of the day.

But critics say innovations have not come quickly enough.

“Insulin has been used to treat diabetes for nearly 100 years, and manufacturers have not introduced any significant new innovations in decades,” said Dutta, the Optum executive. “Yet they continue to drive list prices higher and extend their patents.”

Left: Insulin supplies are pictured in the Manhattan borough of New York City, January 18, 2019. Novo Nordisk, which makes NovoLog, is one of three insulin manufacturers in the U.S. Photo by Carlo Allegri/Reuters