Column: The Fed is lowering interest rates, but so are market forces

Would the Federal Reserve cut interest rates or not? The question dominated the economics headlines in recent months, as it so often has in the past. With President Donald Trump’s insistence that the Fed should cut rates — unprecedented for an American president, given the supposed value of the Fed’s independence from politics — the question has become even more charged.

The Federal Reserve put an end to the speculation Wednesday when it announced it would cut interest rates by a quarter-point.

Why is the Fed’s decision thought to be so critical? The answer is easy. If the Fed cuts interest rates, both normal economic activity and the stock market are supposedly revved up.

But is the Fed solely responsible for driving down interest rates? Or are there larger forces behind the effects we are seeing from the Fed’s actions? There is, it turns out, plenty of reason to think the latter.

We can find a case study in the standby measure of U.S. interest rates: the 10-year Treasury note, which is basically the IOU Uncle Sam gives to an investor willing to lend him money for a decade. It is currently about 2 percent. So if you buy a 10-year T-note for $1,000 — thus lending Sam $1,000 — you will receive $20 a year in interest and your thousand back … in August of 2029. By historical standards, 2 percent is a stunningly low interest rate on lending our country money. From an investor standpoint, it’s better to have a higher rate.

Look at the history of the 10-year rate over the past half-century: 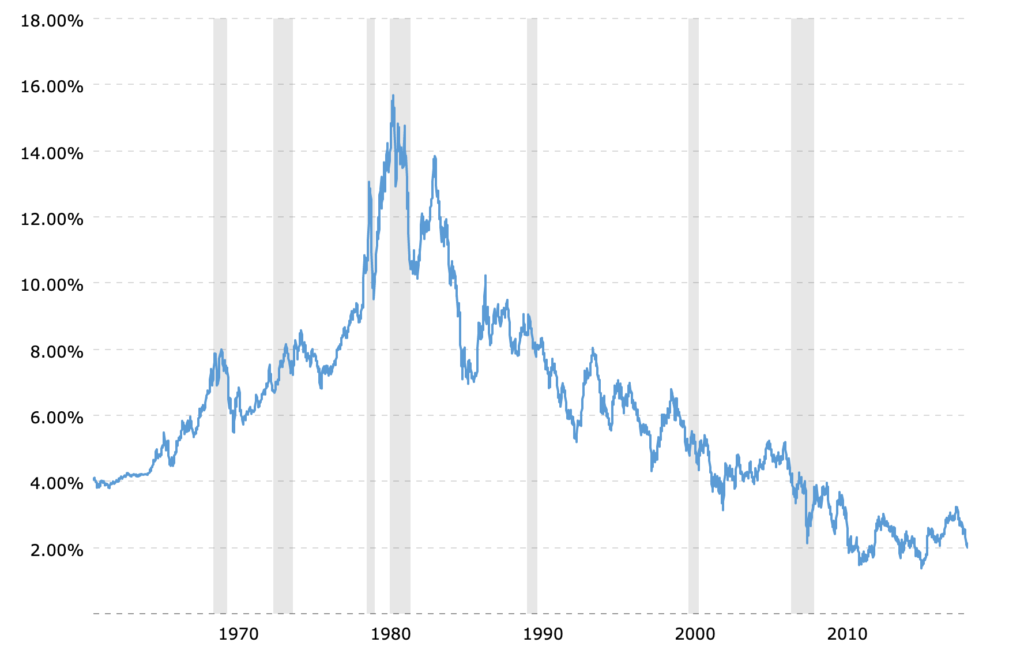 The historical average is nearly 5 percent. In the 1980s it topped 15 percent. But look how low it is these days, and how relatively low it’s been for more than a decade.

“Big surprise,” those who credit the Fed might scoff. “Remember all that ‘quantitative easing’ — flooding the banking system with money and in the process lowering interest rates? That’s the simple explanation.”

But wait a second. The Fed has been raising rates — since 2015! Yet since it began raising rates, the long-term interest rate has actually gone down.

How the Fed lowers interest rates

The Fed can cut the short-term interest rate it charges banks to borrow money overnight. It does so to lower interest rates throughout the financial world in a ripple effect in order to prod the economy, speed it up when there’s a fear of slowdown.

Lower interest rates mean that money is cheaper to come by. You want to buy a house? The lower the interest rate, the less expensive your mortgage. Same for buying a car, or anything else on credit. If more houses are bought, more new houses will presumably be built, more construction workers employed; if more cars are bought, more cars will be manufactured, more jobs (or overtime) will be there for auto workers.

The more workers employed, the more they will spend, and so on, throughout the economy, stimulating an upward spiral of prosperity.

Moreover, lower interest rates are good for the stock market. Why? Well, as workers prosper and spend, companies sell more. On average, their profits would tend to rise. By owning shares in those companies, stock holders own a share of their presumably increased profits. On average, their shares would become more valuable and thus the market as a whole would rise in value.

Lower interest rates also spur the stock market for more subtle reasons. The clearest is that if you’re an investor who wants to lend out some money — by buying a bond, for example — and the interest rate on that money drops, why not buy stocks instead? So you buy shares in a company. So does everybody else. The stock market rises.

So what’s going on? What might be overriding the actions of the Fed?

After the Crash of ’08, it was fashionable to blame then-Fed Chair Alan Greenspan for having kept interest rates too low for too long, thus creating speculative bubbles in both housing and stocks. Greenspan (and his successor, Ben Bernanke), defended the Fed’s actions by talking of a “global savings glut.” That is, they argued that the world was awash in savings, especially in Asia, and that investors and investment funds with those savings were desperate for safe places to put the money. Among the places thought to be safest: the United States Treasury. Thus investors bought Treasury bills (which pay back in a year or less), Treasury notes (10 years) and Treasury bonds (30 years). The more those investors demanded, the less the Treasury had to offer in interest. And the less, by the way, have other countries’ treasuries needed to offer: bond yields are now at a rock bottom-low throughout the world.

In sum, the worldwide demand for IOUs has been driving down the interest rate for the 10-year U.S. T-note, not the Fed.

Years before the crash, Greenspan said said that the world economy was becoming increasingly “light weight,” arguing that business projects didn’t require as much capital as in the days of steel mills, auto factories and coal mines. The new global economy was becoming digitized, miniaturized.

Isn’t that more true than ever these days? Elon Musk may spend a king’s ransom on mega-projects, but look how little capital it takes to start a Google, Twitter, Tinder.

So here is the argument that gets the Fed off the hook for low long-term interest rates — or perhaps makes its machinations not all that important: The world is awash in capital (saved wealth) while the usual channels for investing capital — big business projects that require enormous sums — have dwindled. Therefore capital pours into stocks and bonds. The market goes up. Interest rates go down. End of story.

Left: A screen displays the U.S. Federal Reserve interest rates announcement as traders work on the floor of the New York Stock Exchange (NYSE) on July 31, 2019. Photo by Brendan McDermid/Reuters