How Americans spend much more on health care than they realize

“Ask Phil,” aims to help older Americans and their families by answering their health care and financial questions. Phil is the author of the book, “Get What’s Yours for Medicare,” and co-author of “Get What’s Yours: The Revised Secrets to Maxing Out Your Social Security.” Send your questions to Phil.

U.S. households spent $980 billion on health care in 2017, which works out to more than $3,200 per person, according to the Centers for Medicare and Medicaid Services’ annual report on health spending. While that may have been a bitter a pill to swallow, you might be as surprised as I was to learn that consumers directly paid for only a third of the nation’s $2.9 trillion personal health care costs.

Digging further into the report, it turns out individuals ultimately foot the bill for most of the other $2 trillion as well, but Americans often don’t realize it because they pay for the costs indirectly.

For starters, federal and state governments paid out $1.7 trillion for health care, mostly for Medicaid and Medicare. This hits us as taxpayers.

The tab for health spending by private health insurers (mostly employer plans) exceeded $1 trillion. About $280 billion of that spending is funded by the premiums employees pay. Another $765 billion is from premiums employers pay.

Based on those numbers, you might think employers are the ones paying for the lion’s share of the cost, but employer health insurance costs are viewed mostly as a wage expense. Employers provide health insurance benefits as a tradeoff to larger salaries, so employees are really footing the bill for the entire $1 trillion.

The report breaks down how most of our personal health dollars are spent. The cost of medical research, various government expenses and other smaller categories are excluded. 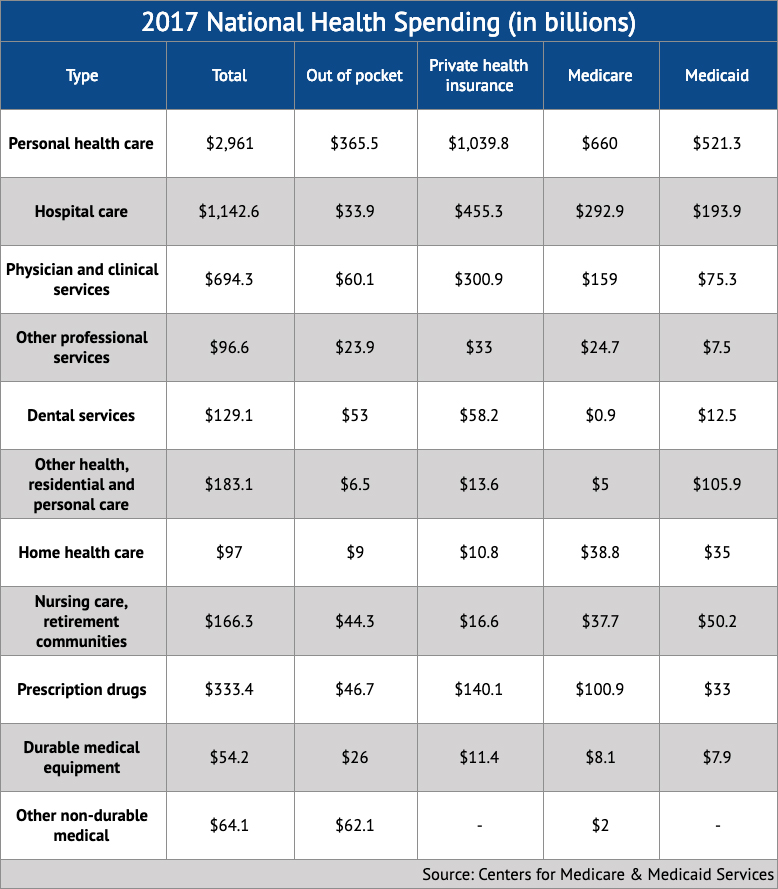 Spend a few minutes with these numbers, and you’ll be able to see where insurance helps and where it doesn’t. For example, consumers spent almost nothing out of pocket for hospital care, which cost $1.15 trillion in 2017, and they directly paid for only about 10 percent of their nearly $700 billion in doctors’ bills.

On the other hand, out-of-pocket spending on dental services is more than 40 percent of total spending. And consumers pay nearly all the costs for non-durable medical supplies, which include over-the-counter medications, health aids and other items generally not covered by insurance.

Because consumers directly pay for such a small share of their health care, they historically have not cared much about what that care costs. Many health care experts have adopted a similar view, saying that providing real price information to consumers may not affect how they consume health care. These attitudes are changing. The introduction of high-deductible health plans and other health insurance “light” products have made millions of consumers very conscious of health care costs.

Yet in most cases, when consumers do take the time to try to find out what their care costs, they often hit dead ends. Beyond office co-pays, even many doctors and health care professionals have only a loose idea of the real price tag for their services.

In many cases, there is no “real” price. It varies depending on where the care is provided– hospital vs. office—and who is paying for it–commercial insurance vs. Medicare vs. no health insurance.

The government has recently taken steps to give patients more information about health care costs, with mixed success.

Last year Congress enacted legislation allowing pharmacists to tell customers when paying for their medication with cash would be cheaper than paying through their insurance. You may not have even known they were previously prevented from doing so.

Over time, it’s likely that the prices for hospital and other health care will become more transparent.

You might also recall that new government transparency rules require hospitals to publicly provide their pricing lists. The results were nothing short of painfully comedic, as hospitals released lists of technical pricing codes that were nearly impossible to understand. Imagine getting a major auto repair that including no pricing totals but simply a parts list for everything that went into fixing your car.

Over time, it’s likely that the prices for hospital and other health care will become more transparent. When this happens, it will be interesting to see how consumers respond.

A couple of years ago, Ethan Lieber, an economist at the University of Notre Dame, studied how employees change the way they used health care when given access to price information.

Employees who used a price transparency tool paid between 10 percent and 17 percent less than employees who did not have access to the service, Lieber found.

“There is potential for price shopping in health care, but I don’t think anybody has shown conclusively that it will save the day,” Lieber said in a phone interview.

Readers, I would love to hear from you about how you shop for health care, and especially how information about health prices has changed your behavior. Send me your thoughts or questions.