“Ask Phil,” aims to help older Americans and their families by answering their health care and financial questions. Phil is the author of the new book, “Get What’s Yours for Medicare,” and co-author of “Get What’s Yours: The Revised Secrets to Maxing Out Your Social Security.” Send your questions to Phil.

Today’s column could be entitled “A Tale of Two Donut Holes.” Medicare beneficiaries might guess that one of these refers to the donut hole in Part D drug plans, and they would be correct. More about this later.

But what of the other? It’s part of a major Social Security reform proposal that congressional Democrats have been pushing for years. Last week, emboldened by their House majority, more than 200 House members co-sponsored its reintroduction into the new Congress.

The bill’s primary House sponsor, Rep. John Larson of Connecticut, said he will hold public hearings and local town halls around the country to discuss what would be the most significant change in Social Security in nearly 50 years. House passage of the bill would create a potent 2020 election issue if Senate Republicans balk at considering the measure in their chamber.

Called the Social Security 2100 Act, the bill would raise Social Security benefits, especially for lower-income recipients. But this is no government giveaway plan. The measure would sharply raise payroll taxes over the next 20 years and require wealthier workers – those making more than $400,000 a year – to pay taxes on all earnings above that level. In exchange, the financially challenged retirement system would become self-sustaining for at least 75 years.

Importantly, the bill would retain the financial independence of Social Security. The program would be self-funded, would not add to government deficits, and would continue to be insulated from what has come to be an annual drama over federal government funding.

Putting Social Security on rock-solid financial ground would be an especially important step in creating a financial future that younger Americans could count on.

In a clever legislative maneuver, the bill also would create a donut hole that exempts most high-income wage earners from sharply higher payroll taxes. Right now, a 12.4 percent payroll tax (split between employee and employer contributions) is levied on the first $132,900 in annual wages. This payroll tax ceiling increases every year to keep pace with wage inflation.

There are no taxes paid on wages above the ceiling, which means uber-wealthy hedge fund managers can pay all their Social Security taxes in January while the rest of us toil for the entire year to do so.

The House bill would slap payroll taxes on these wealthy wage earners. But it would create a donut hole that exempts wages between the tax ceiling and $400,000. Over time, this donut hole will shrink and eventually disappear as the tax ceiling increases every year. Besides exempting a large segment of the public who otherwise might howl over higher Social Security taxes, the bill creates a gradual 20-year funding trajectory for higher program revenues.

Beginning in 2020, the combined 12.4 percent payroll tax rate would be increased by a tenth of a percentage point each year until it reached 14.8 percent in the year 2043.

Make no mistake. This would be a big increase, but it would support higher benefits, a more generous annual cost of living increase (COLA) that reflects the high price of health care for older Americans, and lower income tax rates on Social Security payments. I’m not saying this bill is the best possible fix for the system. Let’s hope it generates vigorous debates that include serious consideration of many other proposals put forward in recent years.

Enactment of this bill, or something like it, would mark a momentous achievement and one that is especially significant given the deteriorating retirement outlook for most Americans. Further, while Social Security is normally regarded as a benefit for older Americans, putting the program and its benefits on rock-solid financial ground would be an especially important step in creating a financial future that younger Americans could count on.

Now for an update on that other donut hole, which affects many of the more than 40 million people with private Medicare Part D insurance drug plans.

Part D plans provide insurance coverage until you and your insurance plan have spent $3,820 in any calendar year on covered drugs. At this point, people will enter the donut hole, or coverage gap, and their insurance coverage will stop. However, Medicare rules are supposed to protect people while they are in the donut hole by requiring them to pay only 25 percent of the cost of brand-name drugs and 37 percent of the cost of generic medicines.

Once an individual’s total out-of-pocket spending has reached $5,100 this year, they exit the donut hole and enter the catastrophic phase of coverage. In this phase, they are supposed to get additional protection and pay no more than 5 percent of their prescription drug costs. Relatively few people used to reach this phase of their plan, but the soaring cost of medications has caused more people to enter the catastrophic phase of Part D.

A new study by the Kaiser Family Foundation finds that Part D drug plans are not doing a great job of protecting people from big hikes in out-of-pocket expenses for costly medications.

The problem, as most people on Medicare know and which Kaiser confirmed, is that a small percentage of a big number is still a big number. Specialty drugs now account for 20 percent of all Part D spending, Kaiser said. That’s triple what they represented in 2010. “Part D enrollees taking high-cost specialty tier drugs can incur significant costs in the catastrophic phase,” the report said.

It looked at 28 insured drugs across four treatment categories – cancer, hepatitis C, multiple sclerosis and rheumatoid arthritis. This table shows the names of the drugs, their total cost without insurance, what they typically cost for people with insurance, and how much of that cost incurred in the catastrophic phase of their Part D plan. 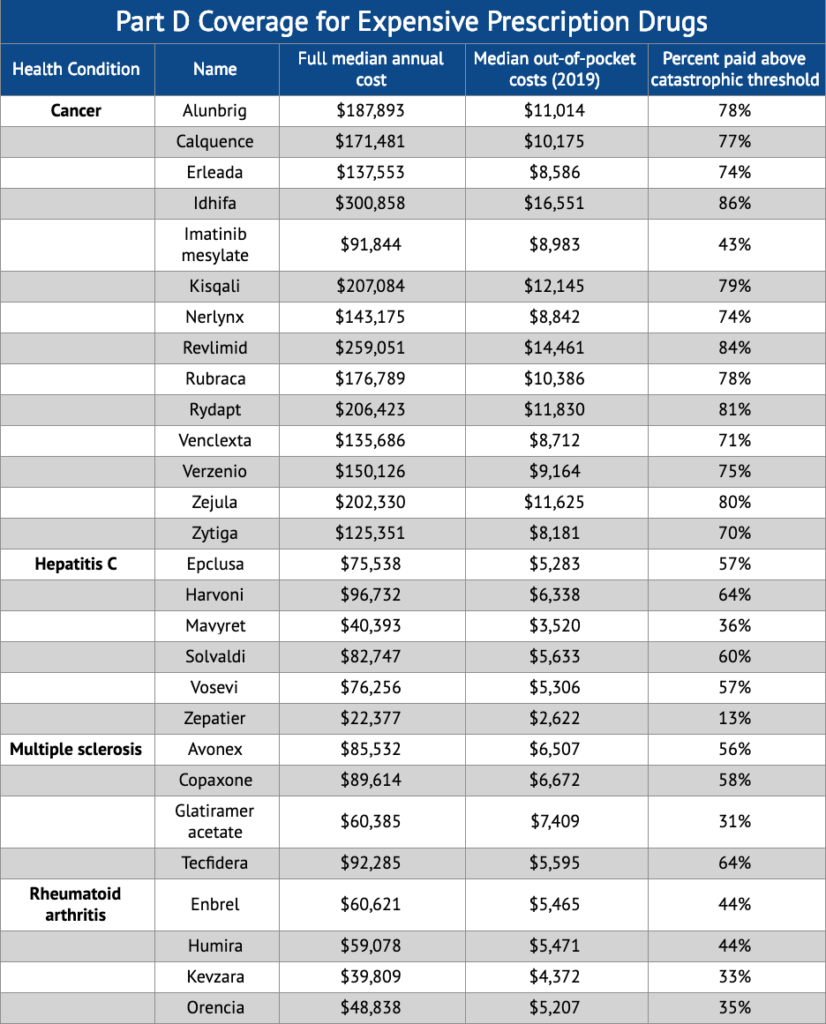 On one level, it’s easy to see that Part D plans do a pretty good job of saving people money compared with what they would be charged if they had no insurance. However, it’s also true that list prices for medications bear little relationship to the actual costs of producing a medicine, even including a hefty component for what it costs to research and develop the drug in the first place.

What’s notable about the Kaiser study is how much of what consumers do pay is levied on them in the catastrophic phase of their plans – a phase designed to provide them the most protection from high drug prices. Even paying only 25 percent of a brand drug’s price in the donut hole, many people quickly blow through the hole and enter the catastrophic phase of their coverage early in the plan year.

As Congress grapples with runaway drug prices, it also should take a look at the design of Part D plans. Insurance plans are effective to the extent they shield people from calamitous risks. Part D plans are falling further behind each year in their ability to do just that.