How the U.S.-China trade war could damage the Amazon rainforest

The trade battle between the U.S. and China could exacerbate deforestation in the Amazon, an analysis published Wednesday in Nature warns.

Last year, the Trump administration imposed tariffs on $250 billion worth of Chinese goods being imported to the U.S. China retaliated with a set of its own tariffs, including a 25 percent import tax on U.S. soybeans. To avoid paying higher prices, China cut soybean purchases from the U.S. by 90 percent and bumped up imports from Brazil to fill the gap.

Now, Brazil is responding by increasing soybean production, which means farmers might clear more land in the rainforest to make room for new crops.

“Massive deforestation of the Amazon over what’s already happening will have profound impacts on global attempts to mitigate climate change and protect biodiversity,” the report states.

If the tariffs continue, the researchers behind the report say, increased soybean production could cause up to 32 million acres of deforestation in the Amazon over the next several years — more land than in New York state. Aside from the ecological devastation, Brazil’s burgeoning soy fields could supplant American farmers and their exports. The researchers, from Germany and the UK, say major steps such as eliminating the tariffs as soon as possible must be swiftly taken to stop irreversible damage.

The global marketplace for soybeans, which are most often used for animal feed, features a handful of players.

The biggest buyer is China, which accounts for nearly two-thirds of soybean imports worldwide. The U.S. and Brazil are the biggest sellers, supplying 38 percent and 45 percent of global exports, respectively. 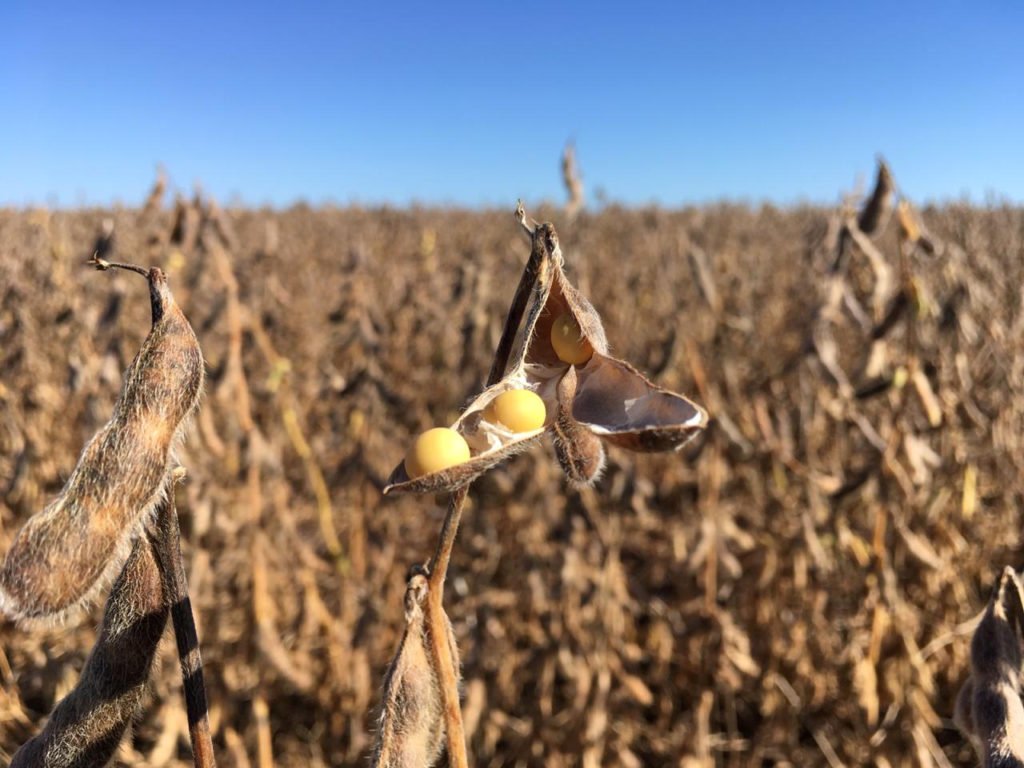 The U.S. harvests soybeans in the fall, while Brazil gathers its crop in the spring. Typically that means China can buy from both countries and have a year-round supply. But soybeans can be stored, so China has the option of relying more heavily on a single producer if needed.

“It’s such a fragile system with such few partners,” said Richard Fuchs, the lead researcher on the analysis and senior research fellow at the Karlsruhe Institute of Technology. A single move can have major ripple effects, he said.

“It’s such a fragile system with such few partners.”

Even before the tariffs, Brazil’s soybean production was growing rapidly — 5 percent per year on average.

But with increased demand from China in the coming years, the researchers estimate Brazil will ramp up its soybean production up to 39 percent more than it would have without the tariffs.

It can be difficult to determine what the shift in production is costing American farmers because there are so many factors are at play, but the federal government has so far allocated $7.7 billion to make up for farmers’ loses.

The analysis predicts that Brazil’s potential soybean expansion could clear away four times more land than what was destroyed in the country’s peak deforestation year of 2004.

Such widespread deforestation would have global ramifications.

“As we struggle actually to stop climate change, you simply can’t do it if there is a big release of carbon from the Amazon,” said Thomas Lovejoy, a biologist, environmental policy expert and senior fellow at the United Nations Foundation who was not involved in the analysis.

The Amazon’s biodiversity holds the potential for new medical and technological discoveries. (ACE inhibitors used to lower blood pressure were inspired by the venom of the Brazilian pit viper, which lives in the Amazon.) Deforestation has also been shown to lead to species loss. 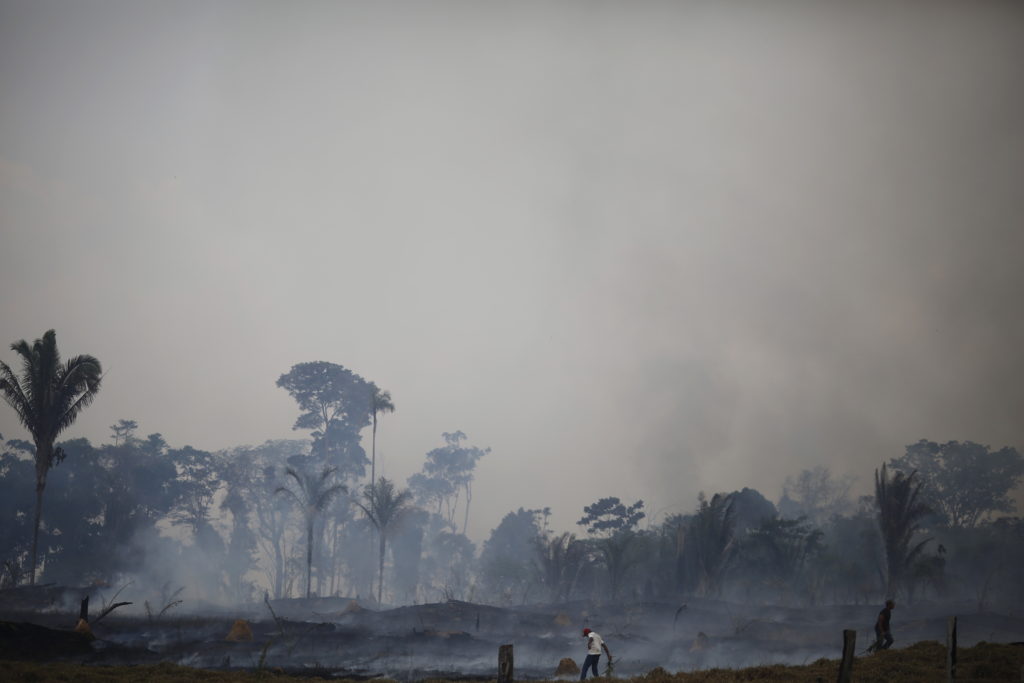 Men try to extinguish a fire at a farm in Rio Pardo next to Bom Futuro National Forest, in the district of Porto Velho, Rondonia State, Brazil, August 30, 2015. The town of Rio Pardo, a settlement of about 4,000 people in the Amazon rainforest, rises where only jungle stood less than a quarter of a century ago. Loggers first cleared the forest followed by ranchers and farmers. Photo by Nacho Doce/Reuters

In 2006, businesses, nonprofits and government entities placed a moratorium on soybean agriculture on newly deforested land in the Amazon, but the deal has loopholes.

Farmers will sometimes convert land previously used for livestock or other crops into land for soybeans and then push their pastureland further into the rainforest.

Environmentalists also warn that Brazil’s new president, Jair Bolsonaro, has relaxed enforcement of regulations. Bolsonaro campaigned on being pro-business in the wake of Brazil’s worst economic recession on record and has dismissed climate change as a Marxist plot.

But other experts say Brazil’s largest farmers want to protect the Amazon, in part because they fear buyers from other countries would be dissuaded by farming practices that aren’t environmentally friendly.

Bolsonaro, who has been called the “Trump of the Tropics,” has a good relationship with the U.S. president, which was on display last week when the two leaders met at the White House. If Brazilian policy were viewed as undercutting American farmers, it could compromise Bolsonaro’s goals of improving economic ties with the U.S., Lovejoy said.

Is ending the trade battle the solution?

The U.S. and China are taking steps to reduce trade tensions. Earlier this year, President Donald Trump and Chinese President Xi Jinping reached a truce as their countries continue negotiations. As a result, China bought a large supply of soybeans in December, putting a damper on Brazil’s soybean exports.
Even if the tariffs ended tomorrow, the damage could already be done.

Eliminating tariffs will not halt the growing demand for soybeans throughout the world.

“A lot of trade is built on trust and networks,” Fuchs told the NewsHour. “Once this is damaged or even destroyed, I wonder if the Chinese wouldn’t learn a lesson from that in the future to diversify their supplier,” relying less heavily on the U.S. to meet its demand.

And eliminating tariffs will not halt the growing demand for soybeans throughout the world.

As the economies of developing nations grow, demand for meat, and the soybeans that go into animal feed, are likely to increase — putting further pressure on Brazil to expand its soybean production, anyway.

“There were already concerns about deforestation in the Amazon before the trade war, and I definitely agree that makes things worse, but there is still the underlying problem that needs to be addressed,” said Kimberly Elliott, a visiting fellow at the Center for Global development who focuses on trade policy and is not affiliated with the research team.

The main way to address it: reduce meat consumption. That is a heavy lift for many nations, including both Brazil and the U.S., which have some of the highest meat consumptions per capita in the world.

Left: An aerial view shows the Amazon rainforest bordered by a farm and land cleared to prepare for the planting of soybeans, in Mato Grosso, western Brazil, October 2, 2015. Photo by Paulo Whitaker/Reuters