LAS VEGAS — Slot machines are powered down, casinos boarded up and barricaded.

Sidewalks are largely deserted and electronic marquees that once flashed neon calls for nightclubs, magic shows and topless revues instead beam somber messages of safety.

The famous fountains of the Bellagio casino, where water choreographed to lights and music shoots hundreds of feet in the air, are still. Throngs of visitors who made it tough to maneuver on sidewalks have been replaced by the occasional jogger or skateboarder.

“It’s crazy,” said Chris Morehouse, a 70-year-old Elvis impersonator who spent a recent afternoon sipping Miller High Life and posing with a few locals who took advantage of the eerie silence to take photos at the neon-bedecked welcome sign on the Las Vegas Strip. “It’s like the end of the world.”

Instead of hosting throngs of visitors for one of the busiest seasons of the year, with March Madness drawing swarms to sportsbooks, or the now-scuttled plan to host the NFL draft this weekend, ferrying players in boats to a red carpet stage on the Bellagio lake, Las Vegas is trying to survive.

Nevada’s tourism, leisure, hospitality and gambling industry accounts for one in three jobs in the state – making the state more dependent on tourism than Alaska on oil. 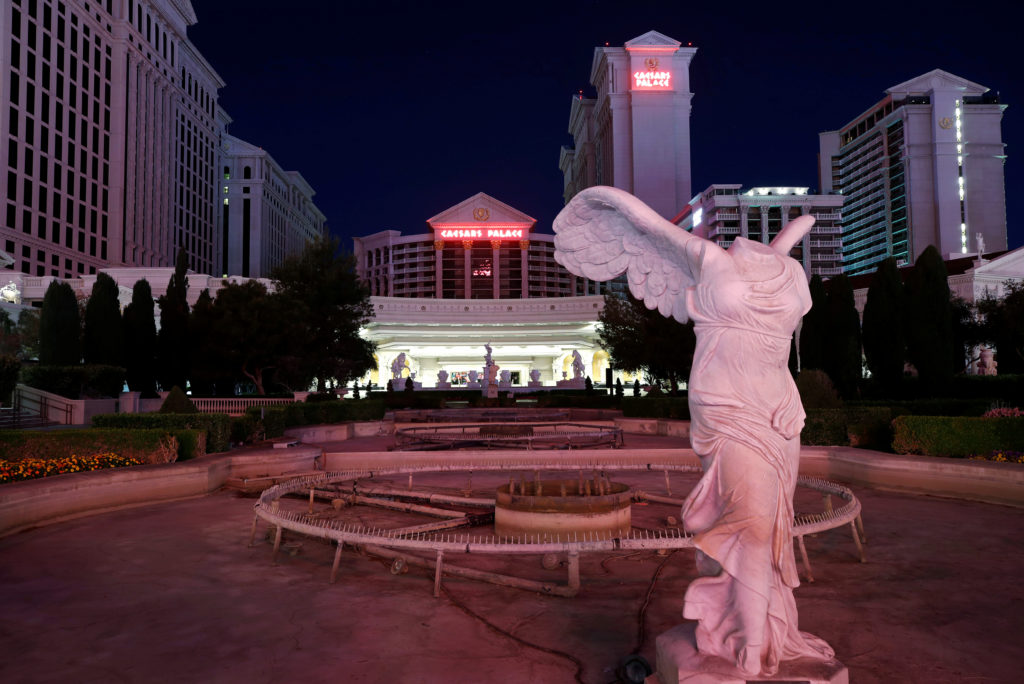 The fountains at Caesars Palace are empty during the shutdown of all casinos and nonessential businesses, an effort to slow the spread of the novel coronavirus, in Las Vegas, Nevada, U.S. April 3, 2020. Photo by Steve Marcus/Reuters.

Workers are expected to lose $7.7 billion in wages and salaries over the next 18 months if the tourism industry is shuttered between 30 and 90 days, according to a study from the Nevada Resort Association.

With the industry effectively closed for more than five weeks now, more than 343,000 residents have filed for unemployment, and state and local governments could lose more than $1 billion in tax revenues.

The politically independent mayor of Las Vegas, Carolyn Goodman, has issued public pleas calling for the Democratic Gov. Steve Sisolak to end the statewide shutdown of casinos and non-essential businesses, which she calls “total insanity.”

“For heaven’s sake,” Goodman said at an April city council meeting, “being closed is killing us already, and killing Las Vegas, our industry, our convention and tourism business that we have all worked so hard to build.”

Sisolak has declined to give a date for when he’ll start easing restrictions, saying the state has to see at least two weeks of declines in deaths and new cases, along with more widespread testing and tracking, with before he will start gradually easing rules.

Sisolak said in an interview on CNN Wednesday night that he didn’t want workers to have to choose between their paycheck and their life and noted that the casino workers’ union has reported 11 deaths among its ranks due to the virus.

“We will rebuild our economy. Las Vegas will continue to thrive. But I can’t do that if I lose more people,” he said.

For most people, the coronavirus causes mild or moderate symptoms, such as fever and cough that clear up in two to three weeks. For some, especially older adults and people with existing health problems, it can cause more severe illness, including pneumonia, and death. The vast majority of people recover. 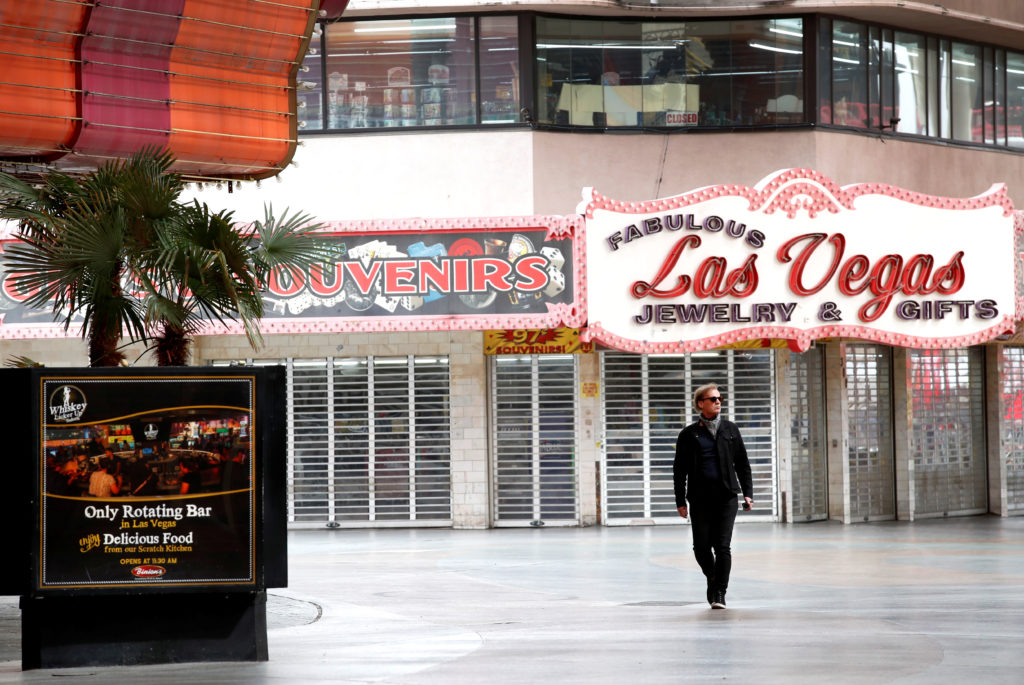 Steve Johnson of Las Vegas walks through the normally crowded Fremont Street Experience after Nevada Governor Steve Sisolak shut down all nonessential businesses, including casinos at the heart of the state’s economy, as part of steps to slow the spread of the novel coronavirus in Las Vegas, Nevada, U.S. March 18, 2020. Photo by Steve Marcus/Reuters.

So far, the casino closures are expected to extend at least into May, leaving workers like Kimberly Ireland struggling to find a way to hang on.

The 49-year-old was laid off from her job as a bell desk dispatcher at the Mirage casino-resort, where she worked for a decade.

She’s living off her savings and the unemployment, and also supporting her adult daughter, who is on an unpaid maternity leave, and a new grandson, who was born days after the casinos were shuttered.

“Money is running out. It’s getting low for the majority of us,” she said.

Ireland said workers at her casino weren’t given any guidance about when they’d be back or what it might be like then they return. For now, she doesn’t think Las Vegas is ready.

Victor Chicas, a restaurant server in the Mandalay Bay casino-hotel, was facing foreclosure on his home before the virus shut down the city and the 54-year-old was laid off.

He immediately ended his cable and internet service to cut his expenses and drained his swimming pool to trim his electric bill. He’s still waiting to find out if his home loan modification will be approved and if he’ll get a chance to try to keep his house, while also supporting his sister and her two children, who immigrated to the U.S. from Guatemala.

Like Ireland, said he wishes his employer would pay him through the shutdown but disagrees with the mayor’s call to reopen Las Vegas.

“Life is more important than anything else,” he said. “You’re not going to buy life with money.” 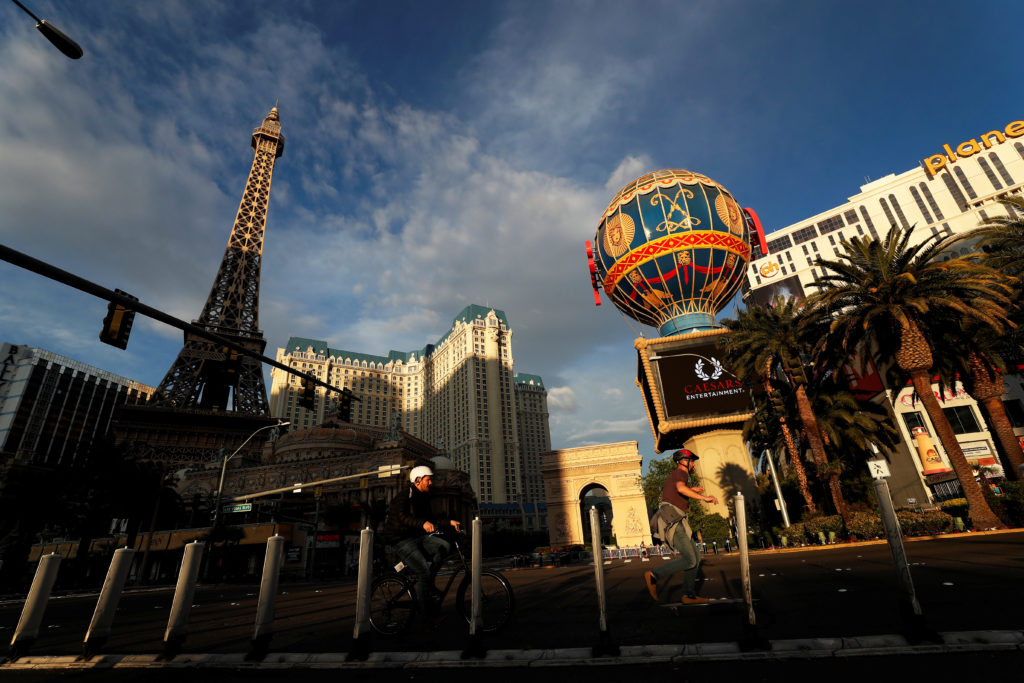 People ride a bicycle and skateboard along an empty Las Vegas strip as the spread of coronavirus disease (COVID-19) continues, in Las Vegas, Nevada U.S., April 10, 2020. Photo by Shannon Stapleton/Reuters.

While about 24% of the state’s workforce has filed for unemployment benefits since March 21, that doesn’t include waves of others who haven’t been able to get through the overburdened system. Nor does it include the self-employed and gig workers, who are newly eligible for benefits under a federal aid package that the state is scrambling to accommodate. Nevada officials say the state may not have a website ready for them to seek benefits until mid-May.

Those who rely on the amusements of Las Vegas in non-traditional ways are trying to find a way to endure.

Wearing a white, rhinestone-studded jumpsuit, a thick black wig, a gold chain shining on his bare chest and sunglasses to match, Morehouse, the Elvis impersonator, has seized on the sunny weather and the restless locals visiting one of the few tourist attractions still open amid the COVID-19 outbreak–the iconic “Welcome to Fabulous Las Vegas” sign. He’s brought a speaker to perform karaoke and a few cans of beer, which he sips as he sings and sways in the open-air park as people in groups of twos and threes still come up to take a photo with the sign.

While foot traffic is light, Morehouse hopes he might lure curious drivers to pullover.

At dusk falls and dim lights start glow, many locals slowly drive several miles of the Strip, with their car windows rolled down and phones raised to photograph and film America’s most flamboyant party reduced to a vacant, muted spectacle, a post-apocalyptic remnant of a time before social distancing and stay-at-home orders, when excess and wild attractions were the main draw.

Brandy Little, a 35-year-old economist and Las Vegas native, said she cried the first time she drove the empty Strip during the shutdown, knowing how devastating it is for the city.

“It wouldn’t have been bad if we were only briefly in it,” she said of the coronravirus. “But the whole world is really being hit by it, and we rely on the world to come here and play. If they’re hurting, they might not come and play.”

Left: A view of the Las Vegas Strip during the shutdown of all casinos and nonessential businesses, an effort to slow the spread of the novel coronavirus, in Las Vegas, Nevada, U.S. April 3, 2020. Photo by Steve Marcus/Reuters.