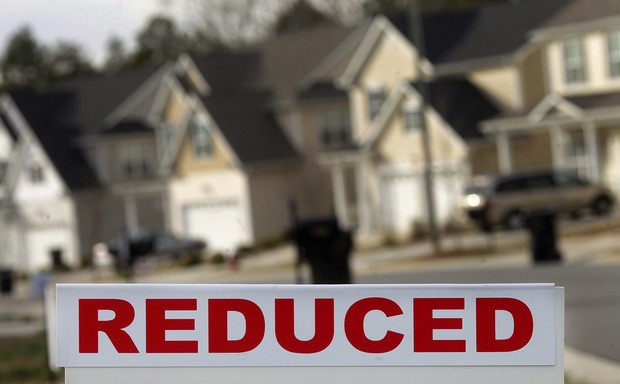 A sign in a neighborhood outside of Greensboro, N.C. Photo by Victor J. Blue/Bloomberg via Getty Images.

Tuesday’s house price numbers are bad — real bad. Not only have overall indicators dropped to their lowest levels since the housing crisis began in mid-2006, the figures were worse than predicted and cast a shadow over news that the economy is turning around.

“Distressed properties returning to the market mean prices will stay depressed, prompting buyers to wait for cheaper bargains and impeding construction. While sales have begun to stabilize, a rebound in home values may take time, underscoring Federal Reserve policy makers’ concern that weakness in housing is blunting their efforts to spur the economic expansion.”

Take a look at our interactive below. The dark lime-green line representing the 20-city composite is the lowest since the summer of 2006 when the housing bubble burst, and is back to late-2002 levels. (You can isolate it by clicking Hide All and then clicking on that label.)

There are a few areas of brightness in an overall gloomy report. While Detroit is at the bottom of the chart in terms of low home prices, the city saw positive growth of 0.5 percent in December compared to December 2010. But if you compare December 2011 to November 2011, Detroit fell by 3.8 percent. Together with Atlanta, Cleveland and Las Vegas, those four cities saw average home prices below their January 2000 levels. But in another bright spot, Miami and Phoenix were up 0.2 percent and 0.8 percent, respectively, in December over November.

Looking at our home selling price interactive, you can see that an American home sold in December 2011 went for, on average, a level last seen in March 2003.

Last month we reported the numbers showed no sign of recovery. This month, we’ll let David M. Blitzer, chairman of the Index Committee at S&P Indices, sum it up:

“If anything it looks like we might have reentered a period of decline as we begin 2012,” Blitzer said in a statement.

But we’d like to end on a more positive note, pointed out by the Wall Street Journal:

“The National Association of Realtors last week reported that sales of previously owned homes in the U.S. rose in January to the highest level in nearly two years and the inventory of unsold homes contracted to a level considered healthy by economists. Existing-home sales increased 4.3 percent in January from December to a seasonally adjusted annual rate of 4.57 million. It marked the highest level of sales since May 2010, when the housing market was lifted by federal tax credits.”