The 3-0 vote by the all-Republican Public Service Commission came after the body signaled last month it was likely to approve a permit to expand the capacity of the pipeline, despite objections from opponents who said it would increase the probability of a disastrous oil spill.

Texas-based Energy Transfer proposed doubling the capacity of the pipeline last year to meet growing demand for oil shipments from North Dakota, without the need for additional pipelines or rail shipments. Commissioner Brian Kroshus said Wednesday that he believes the project would help take oil trucks off the road, reducing traffic fatalities.

The company plans to build a $40 million pump station near Linton in south-central North Dakota. The new station is necessary to increase the volume of oil the pipeline can move.

The company also plans additional pumping stations in South Dakota, Iowa and Illinois. Commissioners in a South Dakota county last year approved a conditional use permit. Permits in the other states are pending. Iowa regulators want Energy Transfer to provide expert analysis to back up the company’s assertion that doubling the line’s capacity won’t increase the likelihood of a spill.

The $3.8 billion, 1,172-mile (1,886 kilometer) underground pipeline was subject to prolonged protests and hundreds of arrests during its construction in North Dakota in late 2016 and early 2017 because it crosses beneath the Missouri River, just north of the Standing Rock Sioux Reservation. The tribe draws its water from the river and fears pollution.

Energy Transfer insisted the pipeline would be safe, and said the expansion would be, too.

The pipeline has been moving North Dakota oil through South Dakota and Iowa to a shipping point in Illinois since June 2017. Since some of the land in North Dakota falls outside of the pipeline corridor, permission was needed from the commission to build the pump station.

Opponents argued the commission should have considered effects all along the line and not solely at the pump station location.

“Today’s decision demonstrates little to no consideration” to possible impacts of a spill or leak from the expanded pipeline, the tribe said in a statement after the vote. Tim Purdon, an attorney for the Standing Rock Sioux, said before Wednesday’s vote that the tribe would review its legal options if the commission approved the project. 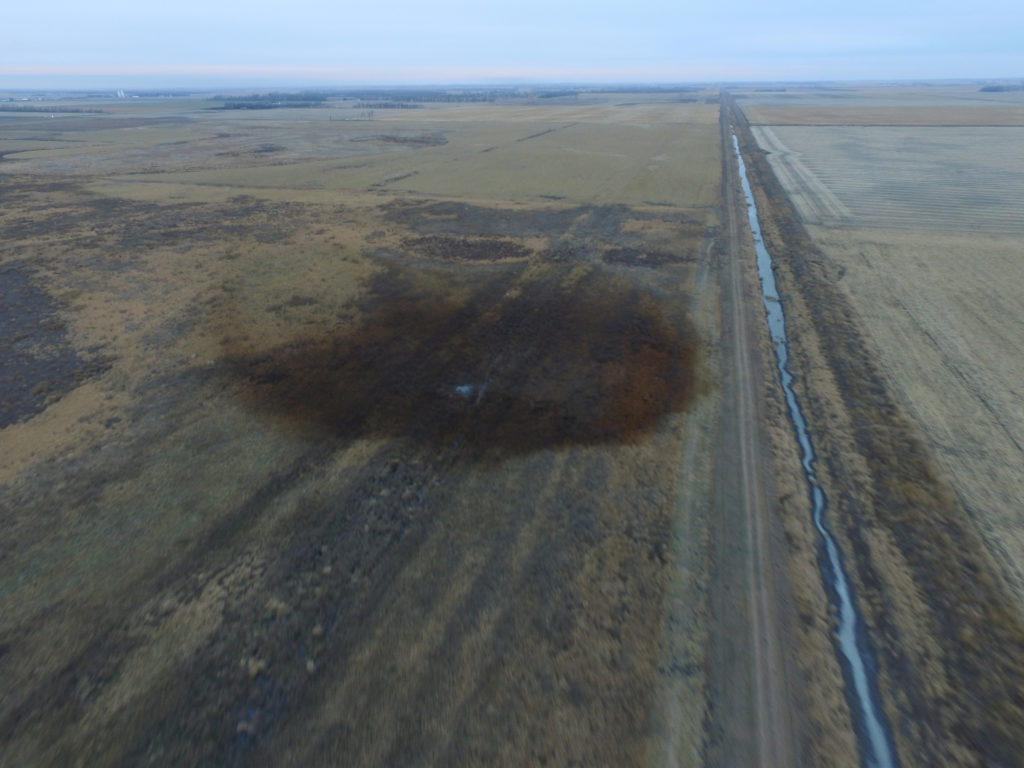 An aerial view shows the darkened ground of an oil spill which shut down the Keystone pipeline between Canada and the United States, located in an agricultural area near Amherst, South Dakota, U.S., in this photo provided November 18, 2017. Courtesy DroneBase/Handout via REUTERS

Commissioners agreed with Energy Transfer’s argument that they could consider a permit application only for the pump site. Commissioners said the state would not impose conditions beyond those required by the federal government, which has jurisdiction on the pipeline.

The company said in court filings that its pump station would produce only “minimal adverse effects on the environment and the citizens of North Dakota.”

The company has said it hoped to start construction this spring, and finish within 10 months.

Left: A depot used to store pipes for Transcanada Corp's planned Keystone XL oil pipeline is seen in Gascoyne, North Dakota November 14, 2014. The Republican-led U.S. House of Representatives approved the Keystone XL pipeline on Friday, but a similar measure struggled to get enough support in the Senate and President Barack Obama indicated he might use his veto if the bill does get through Congress. REUTERS/Andrew Cullen (UNITED STATES - Tags: ENERGY BUSINESS) - RTR4E83W

Trump seeks to relax environmental regulation of some infrastructure projects