As you’ve probably heard by now either on our program or elsewhere, the administration’s Home Affordable Modification Program (HAMP for short) has been a disappointment — to put it generously. The program, announced back in February 2009, aimed to help 3 to 4 million homeowners avoid foreclosure by changing the terms of their loans to make payments affordable.

Two years later, only half a million Americans have gotten permanent HAMP modifications and House Republicans are moving to end the program. At a recent hearing on the matter, outgoing Special Inspector General for the Troubled Asset Relief Program Neil Barofsky testified that there is “basically universal and bipartisan agreement that the HAMP program is failing to meet TARP’s goal of preserving homeownership.”

This week the folks at ProPublica, an independent, non-profit newsroom that produces investigative journalism in the public interest, released their latest report in an ongoing investigation of the program. It uses new data to reach the same conclusion.

A few findings that stood out:

Only a fraction of struggling homeowners are getting help. 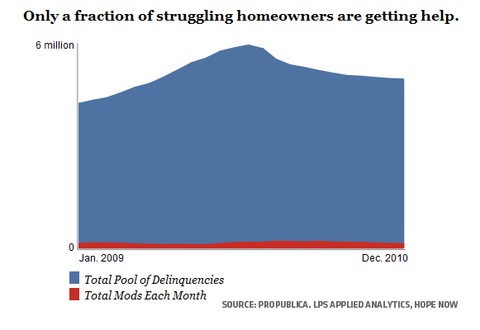 This is a graphic illustration of how many have been helped (the red sliver at the bottom) relative to those in need (the big blue blob). Says ProPublica:

Although Treasury Department officials and mortgage servicers claim the industry has gotten better at handling modifications, the average rate of modifications in the past two years is not significantly different than the rate before HAMP launched.

Treasury sent us this response:

Prior to HAMP, little meaningful assistance was being offered to a struggling homeowner and mortgage modifications often left payments unchanged or even increased payments. HAMP has spurred the industry to take additional actions to help struggling homeowners, while setting standards that have created more options for affordable and sustainable assistance than has ever been available before.

The largest servicers, especially Bank of America, have left most struggling homeowners hanging without either modifying or foreclosing.

ProPublica cites a Moody’s analysis showing that the country’s largest servicer, Bank of America, has neither modified nor foreclosed on a majority of delinquent subprime loans.

In October we interviewed Lauraine Yaffe, one of the many Bank of America customers we found in limbo Yaffe was put in a trial HAMP modification in February of last year. After several months she was told she didn’t qualify for a permanent adjustment. She received a number of auction notices but the bank never proceeded with foreclosure. She was left hanging until last month when she was finally granted a non-HAMP modification. Some might wonder if a PBS profile of her case, which aired not just once but twice on our broadcast, doesn’t make her something of an anomaly.

No servicers took less than a few months to complete a modification. JP Morgan Chase, however, was the worst. The bank took an average of 11 months to modify a mortgage after a borrower fell behind. Chase customers Lee and Sarah Braun told us they dealt with the bank for 18 months before being denied a modification. 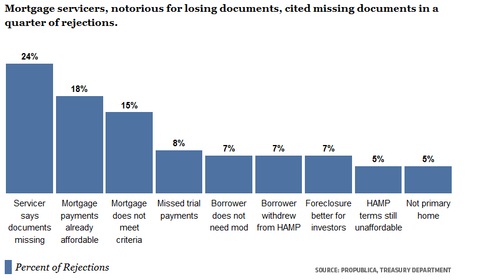 In total, two million homeowners have been rejected from HAMP as of December: 1.3 million were denied even a trial modification and about 700,000 more had their trials canceled.

The most common reason servicers cite for denying a modification: the required documents are missing or incomplete. Almost a quarter of rejections were for this reason. But especially striking in that this occurred against the backdrop of widespread reports of servicers’ inability to reliably keep track of documents.

All of the people we interviewed last year told us their servicer lost or misplaced documents — frequently — during the modification process. ProPublica says 500 people told them the same thing. And they add:

At least 300 times, homeowners were told they hadn’t supplied required documents that the servicer had never actually asked them for.

Sarah Braun described just that experience to us. “There’s been countless numbers of time, which [my husband] has well-documented, where we have been told you’re denied because you have not provided the documents requested, when in fact we have never received a request.” 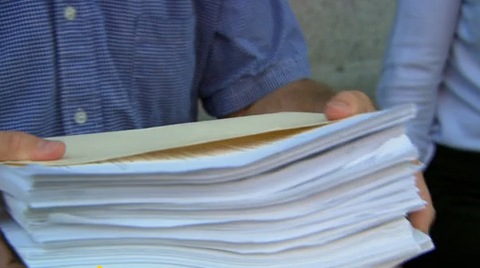 Most funds set aside to help homeowners are still unused.

The Treasury Department has allocated some $37 billion for HAMP and another program called the Hardest Hit Fund, which gives money to states for foreclosure prevention programs. So far only about $1 billion has been spent.

Why has HAMP used so little of its money? ProPublica finds that it’s primarily because the program “provides incentives for mortgage servicers, investors and homeowners only for completed modifications, but the program has achieved relatively few.”

Why so few? We’ve often been told that the incentives weren’t big enough, given the costs and possible legal action by investors, whom the servicers legally represent. A related reason, according to ProPublica: the incentives are paid out slowly — over five years for each loan.

In an email a Treasury spokeswoman wrote us, “HAMP has been carefully designed to protect taxpayer interests — funds are only spent when a homeowner gets a permanent modification and is able to continue making payments on time. Any funds that are not used by the end of the program will be returned to pay down the national deficit.”

We asked the two servicers mentioned in this article to respond to the ProPublica report.

Bank of America’s Dan Frahm emailed us, “Bank of America has completed nearly 800,000 modifications to date, including 106,000 under HAMP — far exceeding other participating servicers. We continue to evolve our programs to meet the needs of our customers.”

Chase spokesman Tom Kelly wrote, “We are working hard to keep people in their homes and have offered over a million modifications to customers struggling with their mortgage payments.”