Should I Refinance My Mortgage to a Fixed Rate?

Question: Do you have a current opinion about the direction of the six-month LIBOR? I’m torn between refinancing my mortgage to a fixed rate or keeping the ridiculously low LIBOR ARM loan I have.

Paul Solman: First off, Gene, let’s do some background explanation to make sure readers know what you’re asking.

The six-month LIBOR — the London Inter-Bank Offering Rate, pronounced LIE-bore — is the interest rate that banks in London charge one another to borrow money for six months.

An ARM is an Adjustable Rate Mortgage, which adjusts to some common interest rate, quite often, LIBOR. The six-month LIBOR as I write is .587 percent. So if Gene’s ARM is LIBOR plus 2.5 percent, say, the total annual cost is almost 3.1 percent. For this year. If six-month LIBOR were going to steeply rise to more than 1.5 percent, say, then locking in a 30-year rate of 4 percent would make sense, since the ARM would reset at 1.5 (LIBOR) plus the contractual 2.5. Hence Gene’s question.

I can’t answer it, of course. It was to just such a question about the direction of interest rates, at a journalism conference in 1988, that the late Harvard economist and economics popularizer John Kenneth Galbraith responded: “There are two kinds of economists; those who don’t know the future and those who don’t KNOW they don’t know.” I adopted it as a motto almost immediately and swear by it still. (In case there’s any confusion, I’m in the first category, though I have to admit, I’m not even an “economist” — no Ph.D in economics, that is.)

Here’s a chart of the six-month LIBOR over the past decade. 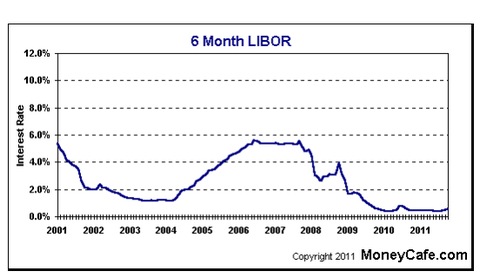 As you can see, the historical average over the past decade is in the 2-4 percent range, hugely higher than today’s half-a-percent or so. As for the most recent data, the rate has been rising. It was .582 percent yesterday, .567 percent last week, .457 percent a year ago. Still rock-bottom low, by historical standards. But today’s .587 percent is more than a quarter again higher than last year’s .457 percent.

Also note the spike in 2008 during the Crash. If European credit freezes again and we experience anything like 2008 redux at the time your ARM resets, Gene, watch out.