U.S. Housing Prices on the Rise — Except in Detroit 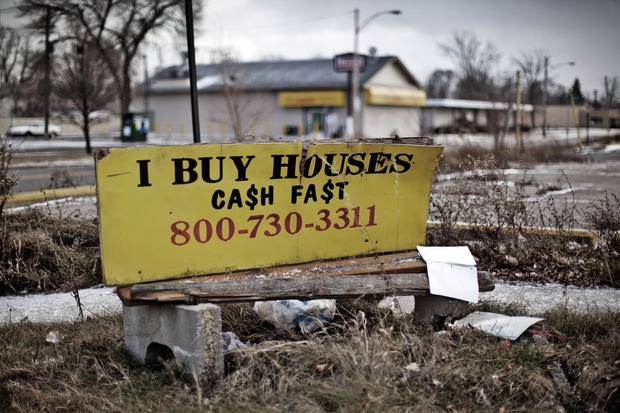 Shuttered and repossessed homes line the streets of a middle class neighborhood on the East side of Detroit. Photo by Charles Ommanney/Getty Images.

Only in Detroit. That’s the punchline from the monthly S&P/Case-Shiller housing survey, published Tuesday morning with April’s very positive results.

As we regularly caution with regard to unemployment data, don’t read too much into any given month’s data when it comes from a statistical sample. So it may be premature to celebrate a resurrection of the U.S. single-family housing market. But in 19 of the 20 cities covered by Case-Shiller, average prices actually went up in April compared to the previous month.

Not that you’d necessarily know the good news from today’s headlines, such as the one over at Bloomberg.com: “Home Prices in U.S. Cities Fall at Slowest Pace Since ’10.” That’s true, but they only fell when the “pace” is measured year-to-year. In other words, prices are still lower today than they were last April. And the lead sentence in the Bloomberg dispatch compounds the confusion: “Residential real estate prices fell in April at the slowest pace in more than a year, adding to signs the U.S. housing market was firming.”

We once made this same mistake ourselves in reporting the data, but the fact is, real estate prices did not fall in April. They rose. Everywhere but in Detroit, that is, which saw a further slump of 3.6 percent. In one month!

Or, if you want to factor in Case-Shiller’s “seasonal adjustment,” Detroit only sank 2.1 percent (and even Boston and New York supposedly subsided by .1 percent). But after the adjustment, prices in 17 cities rose — on a weighted average — .7 percent overall. Hey, at that rate, single-family homes would rise in price by more than 8 percent in the next 12 months. Get ’em before they’re hot. Or wait a month and see if this trend is for real. Or, as many young people and artists have been doing, move to Detroit.

Meanwhile, from across the pond comes a not-too-distant echo of this morning’s Case-Shiller numbers from the Wall Street Journal:

Home prices in Ireland have risen for the first time since the collapse of the market five years ago, offering hope to homeowners struggling to pay off mortgages on properties are still 50% below their peak in 2007, figures released by the Central Statistics Office showed Monday.

A cosmic conjunction, perhaps. Now if only the same thing could happen in Spain. We’ll have a dispatch soon from the real estate market there.