Can California export enough students to shore up college enrollment in other states?

PASADENA, Calif. — Busloads of boisterous high school students from across the Los Angeles basin poured into the Pasadena Convention Center, where colleges from around the world were poised to pitch them.

While colleges and universities are scrambling for students almost everywhere else in the United States, there are so many high school graduates around here that California doesn’t have enough room for them in its public and private colleges and universities. In 2016, the last year for which the figure is available, the state exported 40,000 first-time college students, to institutions elsewhere according to the Public Policy Institute of California.

That has made these students catnip for schools that don’t have enough of their own.

The feeding frenzy is yet another sign of how, although enrollment here in California may be booming, there were nearly 2.9 million fewer college students nationwide this spring than there were at the last peak, in the fall of 2011, according to the National Student Clearinghouse search Center, which tracks this. 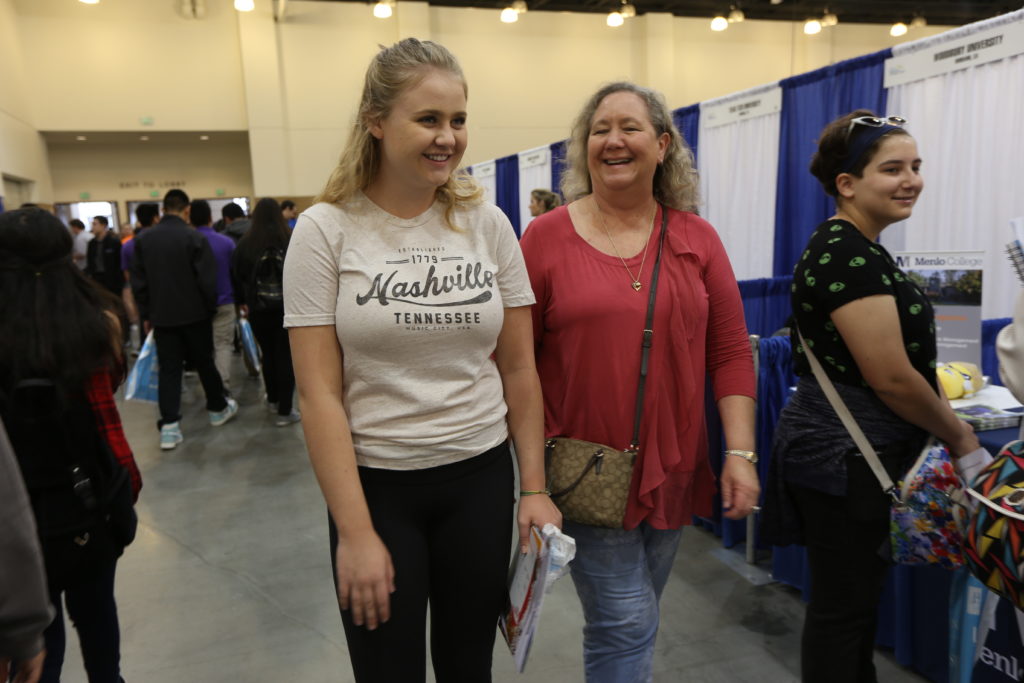 More than 400 colleges and universities nationwide still had seats available for freshmen and transfer students after the traditional May 1 deadline to enroll for the fall, the National Association for College Admission Counseling says. Another new report, from the National Association of College and University Business Officers, shows that, to help fill those seats, institutions are now giving back more than half of their revenue from tuition in the form of discounts and financial aid — a risky strategy that has begun to force a few to close.

Here at the Greater Los Angeles National College Fair, colleges and universities from around the country and the world were looking for new ways to attract Californians. And unlike in past years, when relatively few California students looked past the state’s affordable public universities, non-California colleges were feeling they had a fighting chance.

That’s because more California public universities than ever are turning away students who previously would have been accepted.

The rise in applications to California State University and the University of California has far outpaced capacity since 2011, the Public Policy Institute of California reports. The spike in demand is due largely to a huge increase in the number of qualified high school graduates, the institute says.

While the number of annual high school graduates has grown just 5 percent since 2011, the number completing college-preparation coursework has jumped 32 percent.

The Cal State system traditionally has accepted the top third of California high school graduates, but more than 40 percent of the state’s graduates now qualify, the university system noted this year. That is testing the capacity at more campuses than ever. 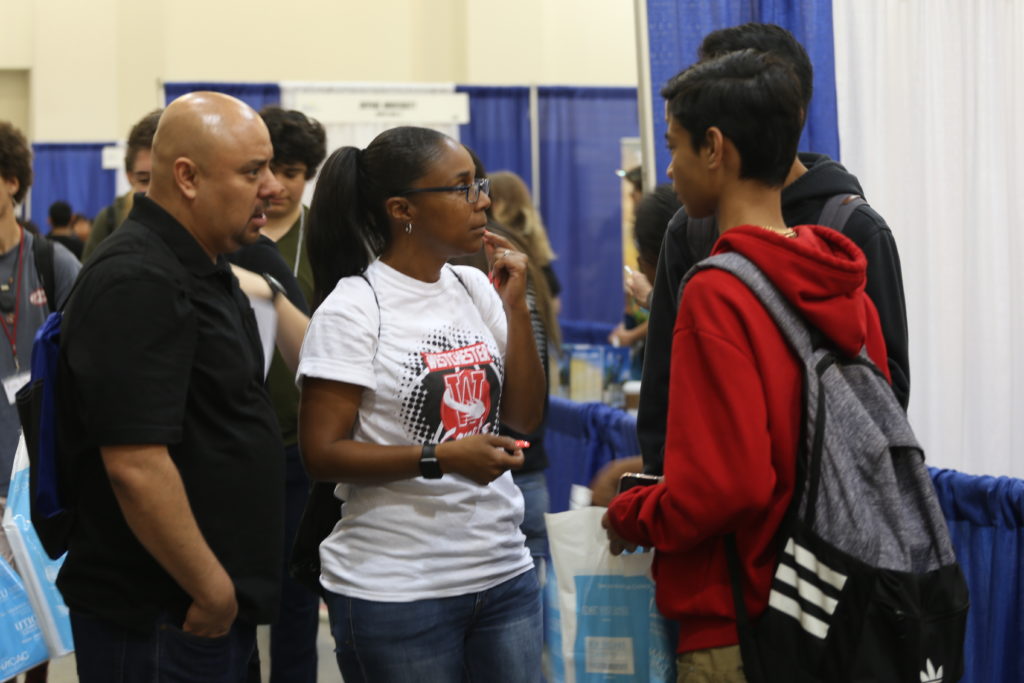 Students and counselors at the Greater Los Angeles National College Fair held at the Pasadena Convention Center. Photo by Iris SchneiderSix of the most crowded of the university system’s 23 schools — San Luis Obispo, Fresno, Fullerton, Long Beach, San Diego and San Jose — have adopted stricter admissions policies. Otherwise-qualified applicants who don’t get into one of those campuses are referred to a less crowded one.

Cal State officials say they have had to turn away 30,000 qualified applicants annually in recent years. They’ve asked Gov. Gavin Newsom for enough money to admit 18,000 additional students. Newsom has countered by proposing funding for 7,000.

And while the top 9 percent of graduates are technically guaranteed admission at a University of California campus, the  UC system now says admission is guaranteed only “if space is available.”

This is hitting home for students who previously could have counted on admission to the state’s public universities. Several high-performing applicants from Los Angeles’ Westchester Enriched Sciences Magnets — a public high school with about 1,100 students — were surprised to be turned down from southern UC and Cal State campuses this year, said counselor Oliver Rivas.

“This year we had a lot of kids rejected with a 3.5 [grade-point average],” said Rivas, who was attending the Pasadena fair with a group of students. “Our valedictorian with a 4.3 didn’t get into UCLA.”

“Our valedictorian with a 4.3 didn’t get into UCLA.”
– Oliver Rivas, Westchester Enriched Sciences Magnets

“I’m seeing a lot more students looking at the East Coast,” said Gabbi Tobias, an admissions counselor from North Carolina’s High Point University, standing at her school’s table in the packed exhibition hall. “It’s been a big difference the past couple of years. A lot more kids are willing to move cross-coast.”

Nearby, 17-year-old Emily Behrendsen was considering the merits of Iowa State University, which was pitching its high admission rates and low cost. The junior at Palos Verdes High School, just south of Los Angeles, said she was open to “something new,” including an out-of-state school.

“Her older brother is going to Alaska for college,” said Emily’s mother, Diana Behrendsen. “I just feel like they need to go where they can thrive and be happy.”

Not all students are comfortable going out of state, or even to in-state universities that are a day’s drive from home. California’s southernmost public university, San Diego State, is nearly 800 miles from its northernmost one, Humboldt State. 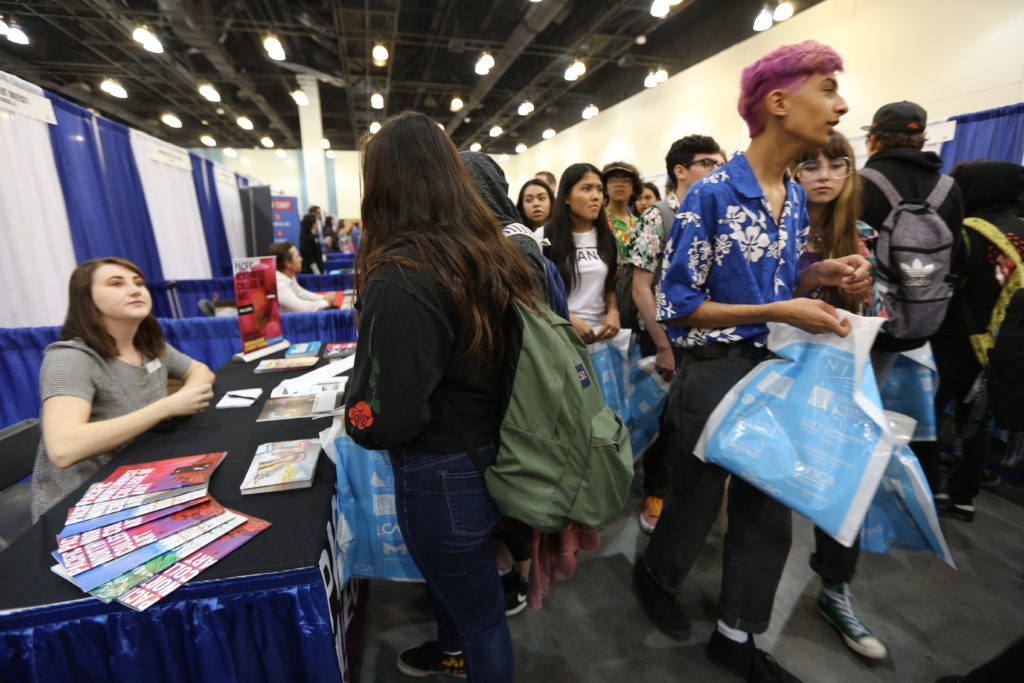 At Los Angeles County’s North Hollywood High School, more students are being turned down from local universities and are looking at options they may not have considered before, said college counselor Veronica Gonzalez.

University leaders are hopeful that the overcrowding in California will ease as the number of high school graduates tapers off in coming years and university graduation rates continue to rise, opening up more room. And Cal State leaders are studying Stockton, in the Central Valley, as the site of a possible new campus; the system’s newest school, Channel Islands, opened in 2002.

In the meantime, all of those out-of-state colleges and universities are happy to take California students.

Back at the National College Fair in Pasadena, counselors were telling visitors to improve their chances by applying to out-of-state schools.

New York’s upstate SUNY Cortland campus was there looking for some way to turn around its steadily declining enrollment: The school had more than 7,350 students in 2010, according to SUNY data, but fewer than 6,900 this year. Admissions counselor Alyssa Ackerman said the campus is attending more California college fairs to take advantage of the state’s capacity problems.

“I’ve seen an influx of California applicants,” she said. “I think a lot of the concern is that they won’t be able to get into UC and CSU.”

This story about the college enrollment was produced by The Hechinger Report, a nonprofit, independent news organization focused on inequality and innovation in education. Sign up for the Hechinger newsletter.

How 2020 presidential candidates would address ‘albatross’ of student debt