Forced off campus by coronavirus, students aren’t won over by online education

Madison Selby was already disappointed that her courses at the University of Washington were going online as part of the effort to contain the spread of the coronavirus.

Then she got an email from a professor who said he’d rather cancel his last couple of classes than deal with the “dumpster-fire potential” of teaching remotely.

This was not how Selby had imagined her last year of college.

“I would not say I’m enjoying it,” said Selby, a 21-year-old senior, after flying home from Seattle to Orange County, California, to finish her final quarter online.

“What we’re creating is not the ideal of what remote instruction looks like.”

If university and college officials were worried that some of their students might not come back once they were moved from real-world classrooms to online education, the experience so far seems to suggest the opposite.

“It does kind of turn me off to the idea of online education,” said Abi Glaum, 20, a junior at the University of Minnesota.

Glaum said some of her professors chose to send students PowerPoint presentations instead of using videoconference platforms such as Zoom or Skype.

“The fact that we’re going to be essentially teaching ourselves is not great,” she said.

Online education experts say there’s a big difference between classes that were designed to be digital from the beginning and what’s happening now, which they describe as a product more of panic than planning.

The differences between a well-planned online course and a classroom-based course that’s forced to adapt can be sizable. With the former, professors use technology that allows group discussions, posting of materials and other interactive features.

Students at brick-and-mortar colleges say many of their instructors, flummoxed by the abrupt change, have simply sent their classes reading materials or videos, with no interaction at all.

The University of Washington, in the coronavirus hot spot of Seattle, was among the first to shift to online classes, at the end of its winter quarter, giving professors little time to adapt, said Phil Reid, vice provost of academic and student affairs.

Students should expect an improvement in quality in the spring quarter, which will be entirely online, Reid said.

READ MORE: Subscribing to college and other visions of higher education’s future

“For the spring, I’m seeing a really different approach,” he said. More instructors will be using interactive tools, he said, and finding creative ways to adapt to the difficult circumstances.

Nearly 3.3 million college students, or 1 out of every 6, took only online classes in 2018, the last year for which the figure is available. That was the highest percentage ever.

But adaptation has its limits. Washington and other schools are canceling classes that require hands-on training, such as some art and engineering courses.

In the theater program at DePaul University in Chicago, questions about taking leaves of absence instead of shifting to online classes have “come up frequently,” according to an email sent to students by Jason Beck, the assistant dean.

The email asked them to reconsider, saying a leave of absence would affect the time they spent in college and could disrupt the way the program is taught. 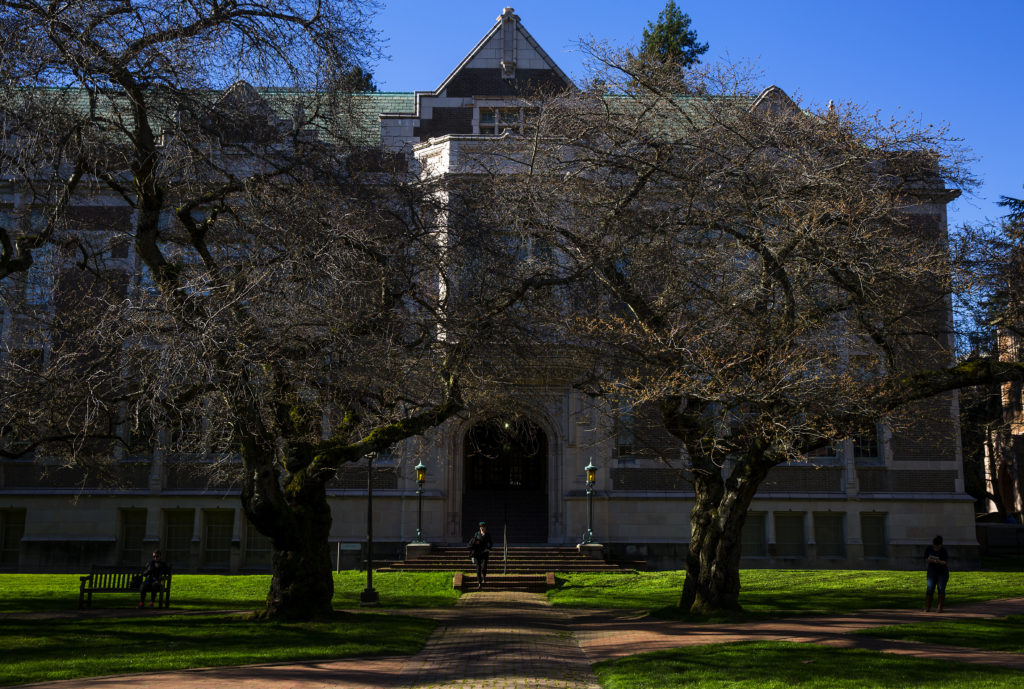 Students pass through the quad at the University of Washington, on March 6, 2018, in Seattle, Washington. Photo by Sy Bean for The Hechinger Report

“If a large number of students were to suddenly take a leave, that will significantly alter not only this spring quarter but also next spring quarter and all quarters beyond that until graduation,” Beck said.

Music classes have proven challenging as well, said Mary Lynch, an oboe instructor at the University of Washington. She has continued to teach on Skype, but poor sound quality has made it difficult for her to critique her students.

Few universities and colleges proved ready for the abrupt change. Fewer than half the nation’s law schools had figured out how to go online by the early stages of the crisis, for example, according to the firm Primary Research Group; higher-ranked law schools were less likely than others to have been prepared.

Regardless of the pandemic’s effects, online education has been on the rise. Nearly 3.3 million college students, or 1 out of every 6, took only online classes in 2018, the last year for which the figure is available, according to Jeff Seaman, director of Bay View Analytics, which tracks online education. That was the highest percentage ever.

In a time of social distancing, it will be important for instructors to reach students who are angry about suddenly having to learn online, said Kevin Carey, vice president for education policy and knowledge management at the think tank New America.

“I think it’s going to be a real challenge,” Carey said. “Hopefully students will be able to engage from their childhood bedroom, or wherever they are.”

That challenge is shaping up to be all too real for students.

Take Spencer Hagaman, a 21-year-old Yale University junior who was apprehensive about taking his discussion-heavy politics classes online from his family home in Huntington Beach, California.

“We’re paying full tuition to get an incomplete education.”

“You’re going to have parents screaming in the background, ‘Breakfast is ready,’ that sort of thing,” Hagaman said. “I would hypothesize that most students are going to want to be in the classroom.”

There’s also the problem of reliable internet access. Millions of Americans returning to their families in rural areas have no broadband access there, making online courses impossible for them. And as the wider shutdown caused by the virus cripples the economy, even households with broadband service might find it harder to afford if parents lose jobs.

Schools need to straddle all these competing problems, said Richard Garrett, chief research officer for the higher education consulting firm Eduventures. But they should be careful not to try to reinvent themselves too quickly.

“They need to find a way to leverage online while staying true to who they are,” Garrett said.

Even if they do, they’re still going to have a tough time winning over Madison Selby and other students who are angry that their classrooms have turned virtual.

“If I wanted to take online classes, I would pay a lot less,” said Selby. “We’re paying full tuition to get an incomplete education.”

This story about online education during coronavirus was produced by The Hechinger Report, a nonprofit, independent news organization focused on inequality and innovation in education. Sign up for our higher education newsletter.

Left: A few university and college officials worry that, once their students have moved from real-world to online education, some might not come back. In fact, the experience so far seems to suggest the opposite. Photo by Jackie Mader/The Hechinger Report