How teachers are trying to stop the spread of hate

As children in the U.S. woke up and went to school Friday morning, the world was grappling with the news of the mass shootings that killed 49 people at two mosques in New Zealand.

“It’s absolutely necessary that we don’t wait until we have horrific situations like this…to pay attention to” the issue of hate, said Abbas Barzegar, director of the Department of Research and Advocacy at the Council on American-Islamic Relations, in a news conference.

Citing data showing “a consistent rise” in anti-Muslim and anti-Semitic bias incidents and hate crimes around the world, he stressed that even events or talk that seemed “banal” should not be ignored or brush aside.

“Right now it seems to be the case that we only look at fires, but we smell the burning smoke from miles and miles away, and we ignore it,” Barzegar said.

The white supremacist ideology that appears to have fueled Friday’s attack knows no borders, but schools around the U.S. are working to identify and stop it from entering their doors.

More than 10 percent of the 7,175 hate-bias incidents reported by law enforcement in 2017 occurred at schools and universities, a roughly 25 percent increase from 2016. According to the data, hate crimes occur more often at schools than at places of worship, government buildings or commercial offices.

Just last week at the elite Washington, D.C., private school Sidwell Friends, an assembly was cut short when students, who were participating in a real-time learning game, created racist usernames. The usernames, of which two contained swastikas, appeared on the large screen during the interactive presentation. The school has educated the children of multiple presidents and vice presidents; former President Barack Obama’s daughter Sasha is currently a senior.

Other schools have experienced similar incidents.

Last year a 10-year-old Muslim student in Massachusetts found death threats in her school cubby. The letters that read, “You’re a terrorist,” and “I will kill you,” prompted a hate crime investigation. But nearly four months later, neither the fifth-grader’s school district nor the Framingham Police Department have identified any suspect.

Short of answers about what happened, school administrators and teachers at Hemenway Elementary School are trying to turn the incident into what superintendent Robert Tremblay called a “teachable moment,” bolstering training and professional development to help both staff and students.

A few weeks ago, when Tremblay attended a superintendents conference, he said he was “taken aback by the many stories of hate incidents,” in the state.

Now Tremblay is working with the Massachusetts Aggression Reduction Center and the Council on American-Islamic Relations, as well as holding ongoing listening sessions with local mosques about what needs to happen for a more inclusive environment.

Hate speech is not a crime itself. In fact, it is legally protected under the First Amendment unless specifically targeting someone.

It can, however, be used as evidence of a hate crime. And, criminality aside, educators are expected to provide a safe and nondiscriminatory learning environment for all students.

“Children are not only aware of biases, but… they too have the potential for developing biases at least as young as age four,” according to a 2014 report from the Schubert Center for Child Studies at Case Western Reserve University. The report advocates for providing “children with education on diversity to promote justice and tolerance among peers” as a way to reduce bias.

Adding hate prevention to the curriculum

In 2017, the Department of Justice hosted a first-of-its-kind conference in Massachusetts for school administrators, advocates and community members to share ideas about preventing and responding to hate speech.

It’s part of a growing effort to address bias in the classroom.

In 2016, John Muir elementary school in Seattle organized a Black Lives Matter Day to show appreciation for African-American students by giving them high-fives on their way in. But the district was forced to cancel the event after receiving several violent threats.

Instead, “thousands of teachers across Seattle Public Schools wore shirts that said Black Lives Matter,” Jesse Hagopian, a teacher at Garfield High School in Seattle, said at a press conference in January. Since that first year, many other teachers and schools around the country have embraced the idea.

READ MORE: Why I am celebrating ‘Black Lives Matter at School’

Northeast High School history teacher Keziah Ridgeway was one of the Philadelphia teachers who brought “Black Lives Matter at School” to her classroom for an entire week last month.

“There are still kids walking around with the buttons on. It lets their friends know, ‘I’m a safe person, I see you, I support you.’ We need so much more of that,” said Ridgeway, who is black and Muslim.

Two years ago, after white supremacists descended on Charlottesville, Virginia, for a “Unite the Right” rally, Ridgeway crafted a three-day lesson plan that allowed her students to discuss what happened and then decide whether images from various scenarios she had identified were racist.

“Typically, I don’t like to spend that long on one lesson, but I thought it was really important,” she said.

While Ridgeway had to develop the lesson herself, some organizations are working to provide teachers with established curricula and other guidance.

“There isn’t a set of best practices when a kid shows up with a Nazi symbol on their shirt.”

That kind of curriculum aims to help students combat racism not only at school but also online.
“There are some groups intentionally targeting young people for recruitment and that’s really dangerous for those students,” Lindsay Schubiner of Western States Center said, referencing video games as one platform where hate groups try to reach teenagers. “School administrators need to be aware of the signs so they intervene.”

Nora Flanagan, an English teacher at Northside College Prep High School in Chicago and an educator of 21 years, helped co-author the toolkit. She spent three days typing “could be” scenarios, based on her real-world experiences.

“I found myself saying, ‘Someone ought to put something together. We need a resource.’ There isn’t a set of best practices when a kid shows up with a Nazi symbol on their shirt,” Flanagan said.

Ridgeway said that “it’s important schools become the first line of defense” to set a positive example for students.

She said discriminatory rhetoric has “gotten worse post-Trump,”noting that the president’s response to Charlottesville was to say there were “very fine people” among the white supremacist neo-Nazis.

“[Discrimination] was always there, but people are much more blatant with things,” Ridgeway said. 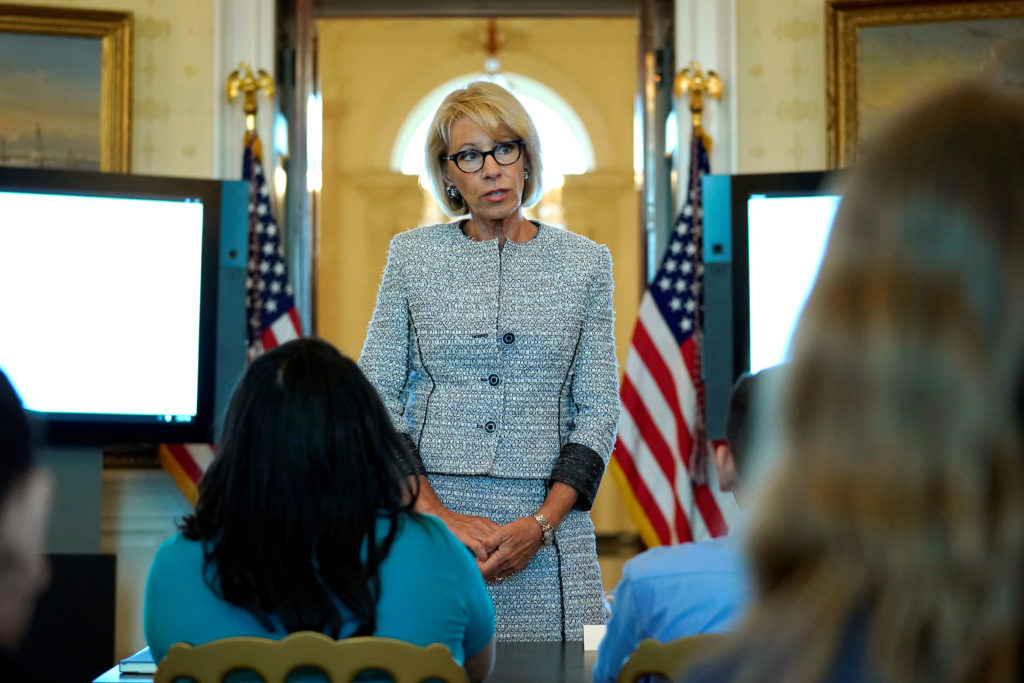 Secretary of Education Betsy DeVos speaks with school children during a listening session at the White House. The Trump administration has been criticized for taking a narrow approach toward addressing racial discrimination in schools. Photo by Joshua Roberts/Reuters

A study by the UCLA Institute for Democracy, Education and Access called “School and Society in the Age of Trump” surveyed more than 500 high school principals about the ways their school communities were experiencing social incivility and division during the Trump presidency.

The Department of Education’s Office for Civil Rights evaluates and, when deemed appropriate, investigates complaints of discriminatory harassment in order to help schools better understand their civil rights obligations, and how to remedy the effects of discrimination, according to an Education Department spokesman.

Under Trump’s Education Secretary, Betsy DeVos, the department has made “a steady march toward narrowing the agency’s approach to racial discrimination and civil rights enforcement,” the Washington Post reported last July. In a 2017 memo proposing revisions to Obama-era policy, officials suggested the office should focus on probing individual complaints, rather than systemic problems.

DeVos also recommended cutting $3.8 million in staffing from the civil rights office in 2017. Congress instead increased the office’s funding.

When asked how the department is helping schools tackle issues of harassment, a spokesperson said it is investing in technical assistance centers that can provide school districts with multi-tiered systems of behavioral support for students who display problematic behaviors.

Yet watchdog groups and teachers like Ridgeway make up a growing chorus calling for more government involvement to mediate hate-bias in K-12 education.

Charlottesville City Schools unanimously passed a resolution banning students from wearing clothes associated with racial hatred, specifically citing the violence in Charlottesville. School board members resolved that “clothing that depicts Confederate imagery or the Nazi swastika or contains images and language associated with the Ku Klux Klan and other White Nationalist groups, is prohibited and will not be tolerated in our schools.”

Additionally, the U.S. Conference of Mayors announced in a statement that it is partnering with Anti-Defamation League to “encourage schools to implement anti-bias and anti-hate content in their curricula and/or through extra-curricular activities.”

“As we educate the next generation of Americans we must not forget the importance of arming them with a love of community,” Tremblay said. “We have our work cut out for us.”