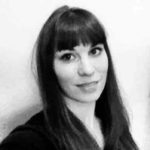 Opinion: Oklahoma students are worth more than legislators are giving

This post has been updated to include Oklahoma Rep. Kevin McDugle’s Facebook Live video stating his reaction to the teacher walkout. The video has since been deleted from the representative’s account but may be seen below.

Normally on a Monday at 3 p.m., I’d be driving home from school in Broken Arrow, Oklahoma, just outside Tulsa. My AP World History kids were supposed to have a quiz. My East Asia History kiddos should be finishing up our focus on Japanese animator Hayao Miyazaki and his work.

But the school was closed up on Monday. Same for Tuesday. And again tomorrow.

Why? Because our students are worth more than what they’re getting from the state legislators of Oklahoma.

“Cuts have continued to happen since the early 2000s. A decade of quashed hopes for legislation and robbing Peter to pay Paul.”

Why? Because for a decade, kids have gone through Oklahoma schools in an underfunded system. Cuts have continued to happen since the early 2000s. A decade of quashed hopes for legislation and robbing Peter to pay Paul.

Why? Because for the last four years, the schools of Oklahoma have been told in February and March that their last funding checks from the state will be hundreds of thousands of dollars short, because the state mismanaged the books.

Why? Because of stories like this one or this one of our schools short of basic supplies or classrooms full of jagged, dangerous chairs, or teachers working multiple jobs just to get by. That’s what 10 years of education cuts look like.

Why? Because I am tired of getting the paternalistic pat on the head and “trust us” from a legislature largely full of people who care more about pleasing out of state lobbies than taking care of their constituents at home. 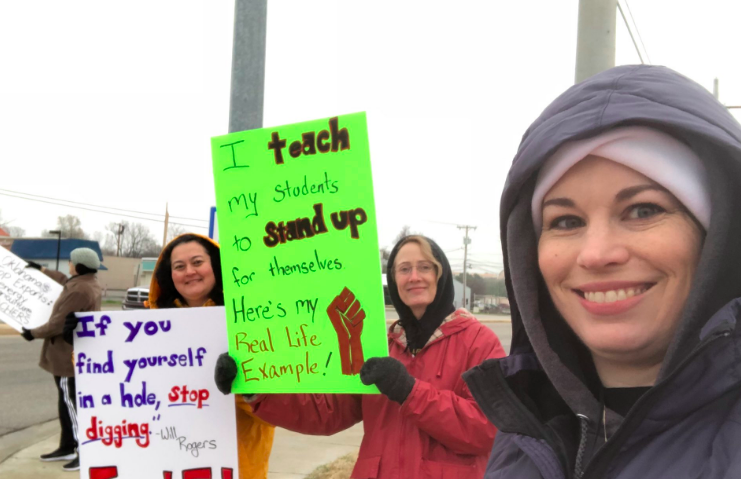 Amy Presley and fellow teachers decided to stay in their city of Broken Arrow, Oklahoma, in order to put pressure on local leaders. Broken Arrow School District cancelled classes on Monday and Tuesday due to the teacher walkout. Photo courtesy of Amy Presley

Or who make statements like this: “I’m not voting for another stinkin’ measure when they’re acting the way they’re acting,” Republican Representative Kevin McDugle said on Facebook Live on Tuesday, posted by KOCO 5 News, “You’re going to come here and act like this after you got a raise. Go right ahead. Be pissed at me if you want to.”

This is my representative to the State Legislature of Oklahoma. McDugle did more for the walkout in this 42-second post than I could do spending hours with my teachers down on 71st Street.

Fortunately, there are several freshman legislators who reach across party lines to try to work together. Unfortunately, they’re outnumbered at the moment.

Oklahoma’s favorite son, Will Rogers, captured the teachers’ perspective on the funding crisis when he famously stated, “If you find yourself in a hole, stop digging!” So what do the teachers want? Full funding for education with dedicated, continual revenue.

Instead of rising at 5:15 in the morning to get ready for work, I bundled up to go stand on the corner of 71st and Elm in Broken Arrow, Oklahoma, with some of my team. Our goal was to get our community to put pressure on our local representation.

The community response has been pretty heartwarming. Enthusiastic honks, waves, and shouts of “We love our teachers!” and “Go BA!” (Broken Arrow) have been commonplace. I felt shocked at the generosity of the community in caring for us. One guy turned around after passing us and brought us breakfast burritos. A lady stopped to give us supplies for more signs. There was a case of water from a young father driving home from work, a dozen hot chocolates from a family with a first-grade daughter at Broken Arrow’s Rhodes Elementary, hot and fresh pizzas from the city’s Domino’s owner, and only a handful of negative interactions.

Have I mentioned that I love this city? And we, the teachers, felt today that the 100,000 residents loved us right back. 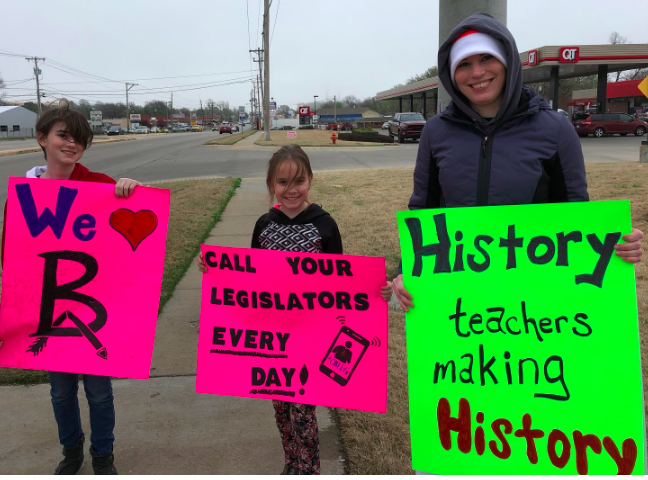 Oklahoma teacher Amy Presley says her kids asked to join her on day two of the teacher walkout. Her spouse brought them to stand with her for a bit before taking them to their martial arts class. Photo by Amy Presley

Throughout the day my social media feeds kept blowing up with notifications that the shuttles at the Capitol had a 45-minute wait to get on board, and that the cell signals were spotty due to volume of use.

There, Oklahoma teachers waited hours to get just minutes with their representatives. My most-recent intern and now coworker Emily Edwards went to the that rally and said the energy was positive and determined.

Rep. McDugle did more for the walkout in this 42-second post than I could do spending hours with my teachers down on 71st Street.

Her sign (below) expressed how teachers are reacting to Gov. Mary Fallin’s lack of support for educators. The governor had suggested teachers should come to the Capitol to “thank the legislators” for passage of the recent pay increase bill.

Well, tomorrow we do the same. Some go to the Capitol to try and convince legislators to permanently re-fund education. Others stay local to try and get our communities to call and pressure their legislators.

Thankfully, my district’s school board and superintendent have chosen to follow the lead of the district’s teachers. I came home Monday to an online survey asking the teachers what we would prefer: Do we want our school board to continue to suspend classes until legislation passes? 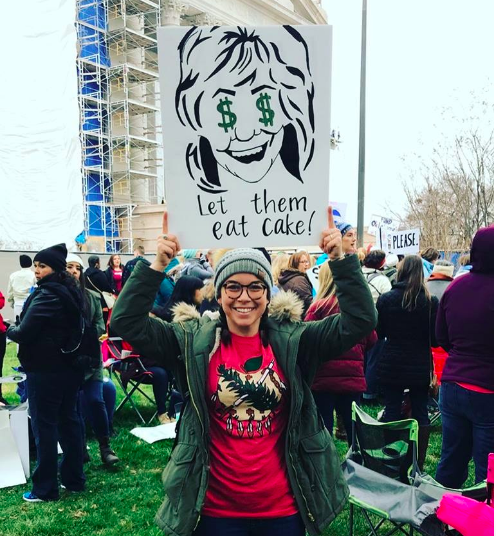 Emily Edwards, Broken Arrow teacher, holds her sign up of Gov. Mary Fallin at the Oklahoma City Capitol Building on April 2, 2018. Fallin supported raising teachers’ salaries but said the recent increase by the Legislature was historic and said Oklahoma teachers should thank their legislators. Photo provided by Amy Presley

This isn’t the case for all districts. Several school boards did not close school on Monday, and more decided not to do so on Tuesday. These teachers either had to call in sick or take a personal day or face very real consequences, including losing their jobs. 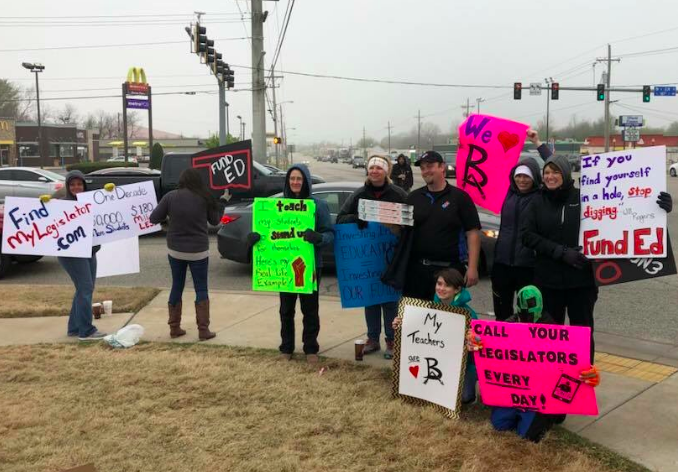 What we want is an end to the cuts, dedicated revenue to replace what has been robbed from education, and no shenanigans in the 11th hour that undermine this action like what happened last week with HB 1010xx.

The best-case scenario would be for pressure to come from our communities, leading to a legislative solution that’s passed tomorrow so that we are back to school on Thursday.

I’m trying to stay hopeful, but experience makes me think that this may take a while. For the meantime, I’ll be in this same little corner of town encouraging my community to call their legislators each day.

Sign up for the PBS NewsHour Education mailer here.

Amy Presley is a social studies teacher at Broken Arrow High School in Broken Arrow, Oklahoma, where she teaches East Asian history and Advanced Placement world history. Presley earned her doctorate in education and is in her 18th year teaching. She is certified by FEMA and the Dept. of Homeland security as a disaster relief volunteer and is also a co-host of the 'Talking Social Studies' podcast.