Opinion: Why ‘Black Panther’ and other comic books belong in the classroom

With the massive success of “Black Panther,” the latest blockbuster from Marvel, the time is ripe for educators to embrace comic books as legitimate teaching and learning tools.

The movie is based on the superhero created by comic book legends Stan Lee and Jack Kirby, first appearing in “Fantastic Four” #52, released in 1966. In that issue, for what turns out to be a defensible reason, the Black Panther, or T’Challa as he is also known, single-handedly takes down each member of the powerful all-white superhero team. During the height of the civil rights movement, this was a powerful statement indeed, providing a clear allegory to the tumultuous time. 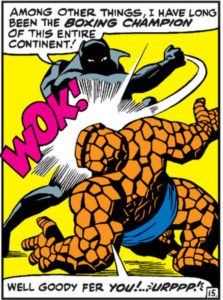 Fantastic Four #52 comic book panel from July 10, 1966, in which Black Panther/T’Challa knocks out the Thing/Ben Grimm, the strongest member of the Fantastic Four. Photo courtesy of Marvel Comics.

My high school history students know how much I love Wednesdays, when new superhero titles are released. But as much as I enjoy getting my geek on, I’m also looking for comics that will help engage learners on important social issues, something comic books have been known to explore head-on.

Marvel’s 1979 Iron Man storyline, “Demon in a Bottle,” explores how a superhero struggles with alcoholism. If a person with a flying, nearly indestructible suit of armor can hit a low point, nobody is above asking for help. In the recently released Supergirl #19, DC Comics tackles school bullying and a non-binary teen opening up to her parents.

Of course, comic books, even those about superheroes, also deserve scholarly scrutiny as legitimate sources.

For example, I’m eager to introduce students to “The Uncanny X-Men,” originally released in 1963, also by Lee and Kirby. The comic features Professor X (a paraplegic and the world’s most powerful psychic), who, with his team of super-powered beings—mutants known as the X-Men—works toward a peaceful coexistence with humanity. The team often faces off against Magneto (a manipulator of magnetism) and his Brotherhood of Mutants, who resort to more aggressive means to achieve peace for their kind.

We need heroes, even if fictional, that reflect our values and how everyone looks.

With the civil rights movement in mind, my juniors will consider how Xavier and Magneto correspond to the Reverend Martin Luther King, Jr. and Malcolm X, respectively. With this creative hook, students explore sources to further enhance their learning. I can’t take credit for this lesson, as other pop-savvy teachers also use it, and I’m uncertain where or from whom I borrowed the idea. What’s clear, though, is that comic books intensify student interest.

But don’t take just my word for it.

I connected with Carol L. Tilley, an associate professor in the School of Information Sciences at the University of Illinois, Champaign-Urbana, whose scholarship focuses on comics, libraries and youth.

“Although comics have been making in-roads into K-12 classrooms and libraries in the past decade — following many decades of unnecessary disparagement and condemnation — we should look for opportunities to accelerate that embrace. If more young people can be spurred to engage with topics like colonialism and racism because of comics, we’ll be richer for it,” said Tilley, who was also a judge for the 2016 Will Eisner Comics Industry Awards, the Oscars of the comic book world. 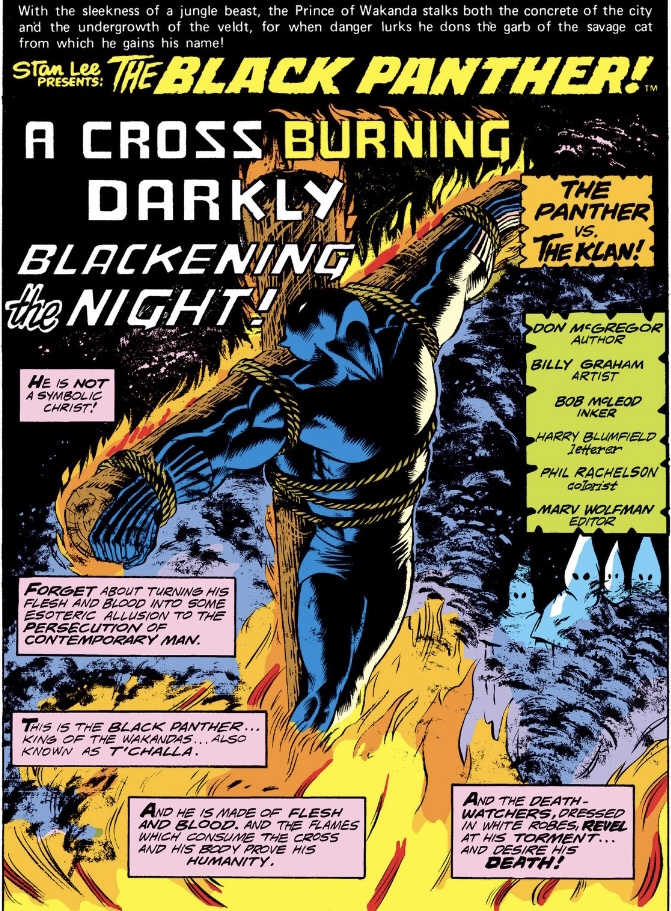 Jungle Action #21 comic panel from May 10, 1976, in which Black Panther/T’Challa is captured by the Klan and tied to a burning cross. Photo courtesy of Marvel Comics.

In 1976, I discovered, Marvel printed several issues in which Black Panther confronts the “Klan,” though the Ku Klux Klan is not directly mentioned. In “Jungle Action” #21, the superhero is even tied to a burning cross, before he escapes — through a combination of might, skill, and willpower — and puts the hurt on his captors. This issue is chock-full of worthy discussion, while also providing a seamless segue into discussing resistance movements – including the power to rise against oppression.

I also love that Ta-Nehisi Coates, one of the most influential African-American writers today, wrote two Black Panther series for Marvel and next will pen his own take on Captain America.

READ MORE: Meet the wonder women behind a new generation of superheroes 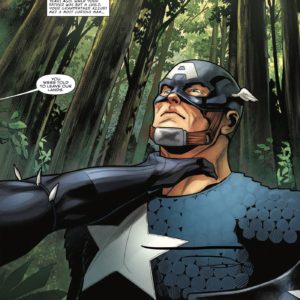 For other ideas on how to include comics in the classroom, I connected with Tim Smyth, a high school social studies teacher at Wissahickon High School in Ambler, Pennsylvania. Recently, after screening a trailer of “Black Panther,” his students discussed the film’s deeper historical significance. But Smyth didn’t stop here. He also showed a panel from “Rise of the Black Panther” #1, which takes place during World War II, to launch his unit on European imperialism.

“The use of symbolism was discussed as students saw the hand of Africa, Black Panther, grabbing the representation of Western civilization, Captain America,” Smyth said.

With that foundation, Smyth’s class researched African nations that resisted colonization, much like the fictional Wakanda. Students also learned about Emperor Menelik II of Ethiopia, and how his use of technology allowed him to hold back Italian incursions in the 1890s.

I teach students from a variety of different backgrounds (and I’m a white teacher, who also happens to be Jewish). Whoever we are, superheroes speak to us all on a universal level. We can all relate to the struggle of trying to do the right thing, especially in the face of adversity.

But we also need heroes, even if fictional, to reflect our values and how everyone looks.