The odds are stacked against black, Latino students going to grad school. Here are some solutions

DURHAM, N.C. — Josiah Hardy seems like a great candidate for graduate school. A self-described science geek who has dreamed of becoming a doctor for as long as he can remember, Hardy studied hard, did well in school, was accepted into the University of Maryland, Baltimore County, and declared a challenging interdisciplinary major of biochemistry and molecular biology.

He’s already been accepted into an elite group of UMBC students called Meyerhoff Scholars who aspire to doctoral degrees in the sciences or engineering. And he spent the summer in another highly selective special program at Duke University to help him get an early start on his route to graduate school — even though he’ll be only a sophomore in the fall.

The odds tend to be stacked against students like Hardy, however — not for lack of qualifications or ambition but because they’re black, Hispanic, Asian or Native American. In many instances, they are the first in their families to go to college, can’t afford expensive graduate educations and have little help navigating the route to an advanced degree.

“It’s so hard to get into graduate school because the path to get there is like a secret that’s only given to certain people.”

“It’s so hard to get into graduate school because the path to get there is like a secret that’s only given to certain people,” said Hardy, who is black. “If you don’t have guidance or a mentorship or any example of people who’ve done it, there’s no way you can know that.”

The Meyerhoff Scholars and the Duke Summer Research Opportunity Program, or SROP, are among a handful of attempts to help more students like Hardy go to graduate school, focusing on those from racial and ethnic backgrounds that are not well represented there. But getting into those programs is a long shot. Hardy was one of only nine students chosen for SROP from among around 400 applicants nationwide.

Black and Hispanic students in particular remain underrepresented in graduate schools, especially in science, technology, engineering and math. About 12 percent of graduate students were black and about 11 percent Hispanic in the fall of 2017, the most recent period for which the figure is available, according to a survey sponsored by the Council of Graduate Schools and the Graduate Record Examinations Board. That’s lower than their proportions of the population, which Census Bureau estimates put at 13 percent and 18 percent, respectively. 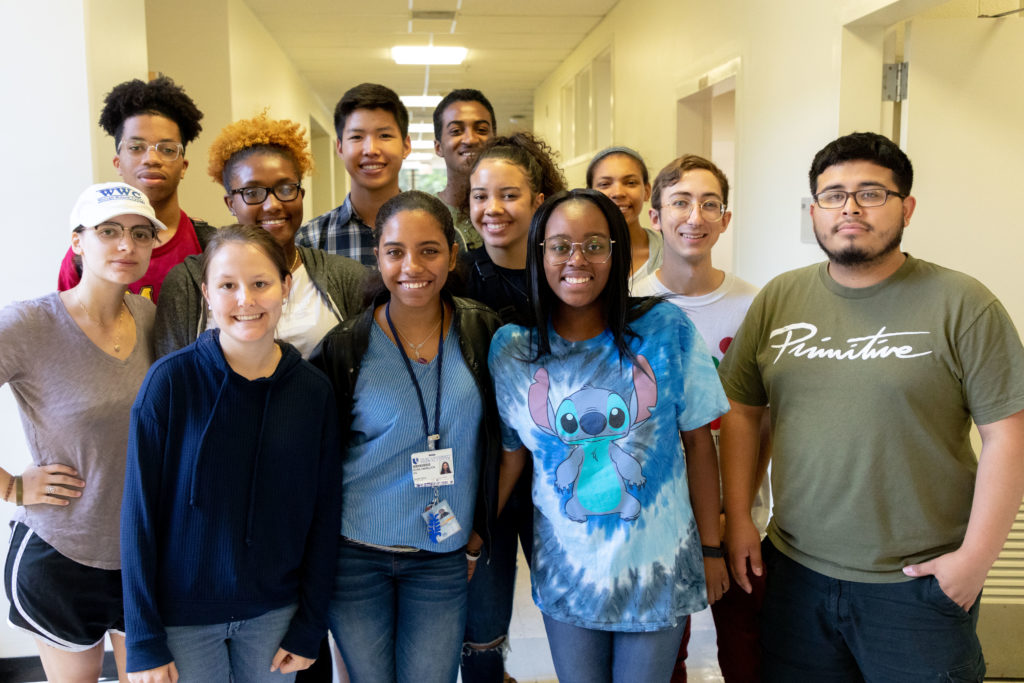 Students from around the country in the Duke Summer Research Opportunity Program gather in the Nanaline H. Duke Building, which houses several of the university’s research labs. Photo by Thomas Weybrecht for The Hechinger Report

At a time when the numbers of students from backgrounds like these are growing more quickly than the number who are white and whose parents went to college, this has implications for graduate school enrollment and employers who need workers with graduate educations.

Theirs is “a rapidly increasing segment of the population that will be needed to sustain the economy, and they need to have the knowledge and skills” to do that, said JoAnn Canales, dean in residence at the Council of Graduate Schools.

That’s among the reasons Duke, UMBC and a small number of other institutions have or are adding programs meant to help these students find their ways to graduate degrees.

The number of white high school graduates who are candidates for college is projected to fall by 14 percent by 2032, according to the Western Interstate Commission for Higher Education, while the number of Hispanic and Asian high school graduates in particular will continue to grow substantially and the number of black high school graduates will fall only slightly. Unless graduate schools can recruit more of these prospects, they won’t be able to keep filling seats. Universities have also promised to diversify their faculties, which requires more doctorates to be awarded to students of races other than white.

“These initiatives have been around for quite some time, but now there seems to be more of a concerted effort, because there is low enrollment in graduate school and there is a growing number of potential students from underrepresented groups,” said Canales. “It’s an untapped market, and economically it makes sense.”

“These initiatives have been around for quite some time, but now there seems to be more of a concerted effort.”

Most of these efforts have been small, and while they have had an effect on the few students who have gone through them, they’ve made little noticeable difference in the numbers nationwide in recent years. Among the U.S. citizens or permanent residents who received research doctorates in 2017, only 6.7 percent were black and 7.1 percent were Hispanic, according to the National Science Foundation. That’s the most recent year for which the doctoral figures are available, and a much smaller proportion of both groups than their shares of the American population. It’s only a small increase from the proportions of black and Hispanic doctoral recipients in 2014, which were 6.4 percent for each group.

As for faculty diversity, it’s hardly budged in recent years, according to a study published by the Hispanic Journal of Law & Policy. At the highest-level research universities, the proportion of black tenured faculty grew by one-tenth of a percent from 2013 to 2017, to 4 percent of the total; the number of Hispanic tenured faculty rose by two-thirds of a percent, to 4.6 percent, the study found.

Canales noted that more programs are needed to focus on recruiting and retaining graduate students who are black, Hispanic, Native American and Asian.

“It starts with a commitment from the institution that they believe in diversity at every level and that they’re going to make a commitment to not only increase it but support these students through completion.” That also requires a diverse faculty with whom the students can identify, she said.

Several graduate schools are providing students like these with financial help as well as the mentoring that proves to have a big impact on their success.

The University of California System began in 2012 to recruit students from historically black colleges and universities to graduate programs at nine campuses. They get summer internships, a waiver of grad school application fees and financial aid if they’re admitted. So far, the program has produced 47 doctoral students and six students pursuing academic master’s degrees. Three doctoral students and five master’s students have already graduated. 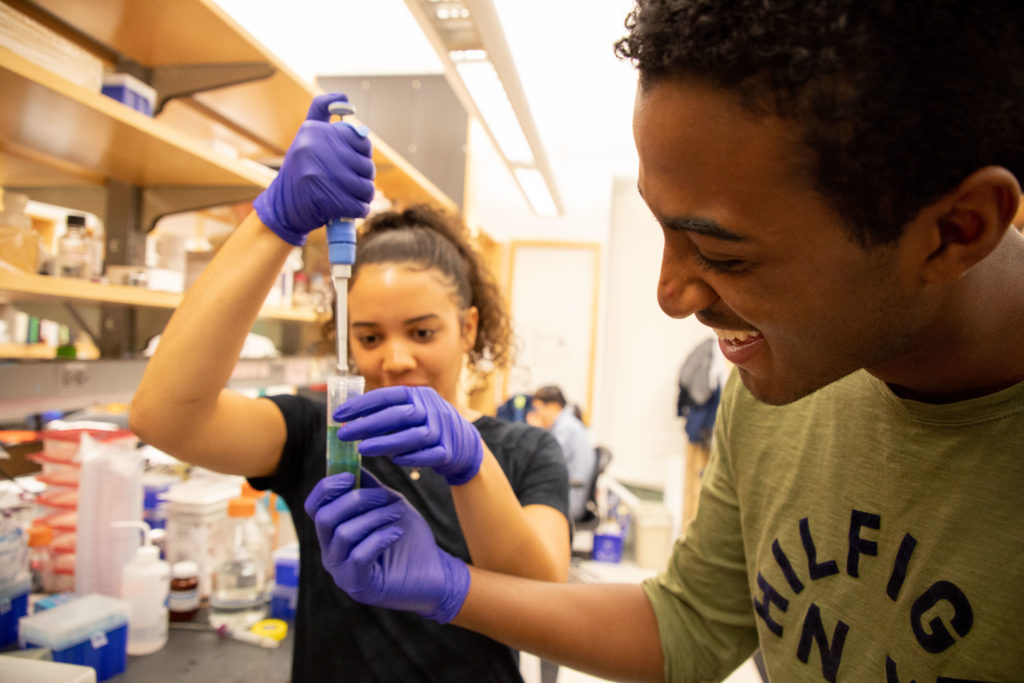 Josiah Hardy of the University of Maryland, Baltimore County and Marjorie Bowen-Kauth of Howard University add dyes to solutions in a lab at Duke, where they attended a summer program emphasizing students from racial and ethnic backgrounds that are not well represented among those earning Ph.Ds. “I think doing these things definitely does give you a big advantage,” Bowen-Kauth says. Photo by Thomas Weybrecht for The Hechinger Report

The Georgetown Experimental Medical Studies Program is a one-year, non-degree post-baccalaureate program that focuses on helping low-income black, Hispanic, Asian and Native American students get into and finish medical school. Eighty percent of participants have been admitted to Georgetown University School of Medicine, and 96 percent of those eligible to graduate have earned medical degrees, the university reports.

The University of Massachusetts Amherst will roll out a fellowship program this fall to provide two years of financial support, mentoring and academic support for about 20 new graduate students who are black, Hispanic, Asian or Native American.

And 76 percent of undergraduates who were chosen as Meyerhoff Scholars at UMBC — they get four-year scholarships, personalized advising, research opportunities and a summer bridge program before their first years, and live together as freshmen — have gone on to receive graduate or professional degrees since the program was established 30 years ago, and 300 have earned doctorates. It’s been copied by Pennsylvania State University at University Park and the University of North Carolina at Chapel Hill, and plans are in the works for the University of California, Berkeley and the University of California, San Diego to start similar programs. (White students are also eligible for Meyerhoff scholarships, but most of the recipients are of other races.)

James Alan Kendrick, assistant dean for graduate student development at Duke, spends much of his time recruiting potential graduate students like Hardy to the Duke SROP, a 10-week graduate-level biomedical research training program for rising sophomores, juniors and seniors, with an emphasis on students from racial or ethnic backgrounds that are not well represented among those earning Ph.Ds.

The SROP tries to demystify the advanced degree application process by providing students with faculty mentors, exposing them to laboratories and providing weekly research seminars and discussions, academic and career-planning workshops and mock graduate-school interviews.

“It took a weight off to hear, ‘Not only are you competitive but you’re also very smart.’”

“At first, it was nerve-racking to be dropped into the lab and told, ‘Do this’ and ‘Do that.’ I was, like, ‘What am I doing here? I have no idea what they’re talking about,’” said Marjorie Bowen-Kauth, a black rising sophomore at Howard University who goes by her middle name, Sapphire. She hopes to get a combined medical and doctoral degree in neurobiology and spent seven to eight hours in the lab each weekday during the summer at Duke doing graduate-level research.

Bowen-Kauth’s anxiety began to fade soon, and by the end of the third week, she felt as if she had it all in hand. “I think doing these things definitely does give you a big advantage,” she said.

Many of these programs help prospective graduate students focus on such issues as a lack of knowledgeable contacts and low self-assurance.

“Before I did my internship, I thought I’d never get into an Ivy because I lacked confidence,” said Gwenaëlle Thomas, who went through the Duke summer program in 2015 as a rising senior at the University of Maryland, Baltimore County. She is now a Ph.D. candidate in the neurobiology department at Duke.

“It took a weight off to hear, ‘Not only are you competitive but you’re also very smart,’ ” said Thomas, who identifies as Afro-Latinx. “I hadn’t really heard that before, and it also influenced the schools I applied to.” In addition to Duke, Thomas applied to and was accepted by Washington University in St. Louis, Emory, Columbia, Baylor and Weill Cornell Medicine.

Kendrick joked that maybe the SROP works too well, since many of its participants, such as Thomas, end up with their pick of graduate schools.

“If we get two out of this class of nine, I will call that a success, because having options is the situation I want our students to be in,” he said.

This story about underrepresented students produced by The Hechinger Report, a nonprofit, independent news organization focused on inequality and innovation in education. Sign up for our higher education newsletter.

Left: Josiah Hardy of the University of Maryland, Baltimore County and Marjorie Bowen-Kauth of Howard University add dyes to solutions in a lab at Duke, where they attended a summer program emphasizing students from racial and ethnic backgrounds that are not well represented among those earning Ph.Ds. “I think doing these things definitely does give you a big advantage,” Bowen-Kauth says. Photo: Thomas Weybrecht for The Hechinger Report