5 charts that show where we are in the pandemic

After 18 months that left an estimated 600,000 Americans dead and sickened millions more, the coronavirus pandemic feels like it’s loosening its hold on the United States.

READ MORE: Why you shouldn’t get a COVID antibody test after a vaccine

In many ways COVID-19 feels as if it is over, or is at least in the beginning of the end. In others, the fallout from the pandemic is still acute. Parts of the U.S. still report lagging and grossly uneven vaccination rates. Partisan politics and misinformation continue to sow divisions during this public health crisis. Many people remain jobless as their industries crawl back from the recession. And a vaccine has not yet been authorized for the nation’s youngest people, who remain at risk for infection and serious illness, along with people whose immune systems are already compromised.

Here’s a look at five different series of data that offer a snapshot about how the nation is recovering and what work is left to be done. 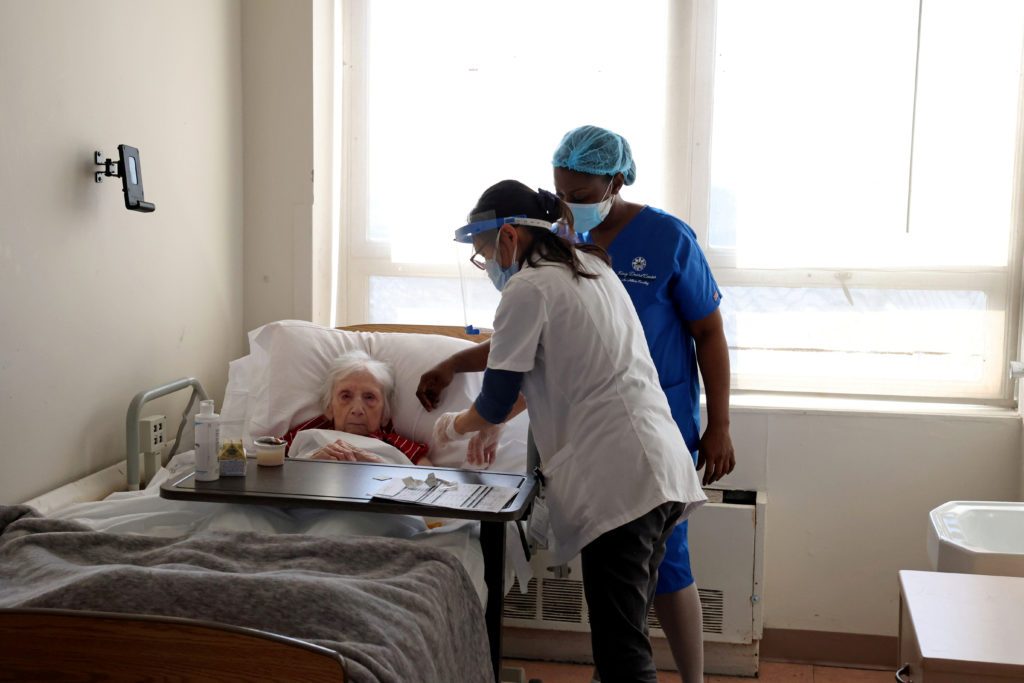 The national COVID-19 vaccination rollout was far from smooth. Distribution was often spotty and uneven, booking appointments was so hard that some people could only secure a shot through friends or strangers who volunteered to navigate the system, and many people are still unable or unwilling to get a shot.

Still, public health experts credit vaccines with the country’s robust turnaround, and the changing face of COVID in the U.S. Roughly 61 percent of Americans over age 12 have now been partially vaccinated, according to the latest data from the Centers for Disease Control and Prevention, and new case rates have dropped to their lowest point since March 2020. 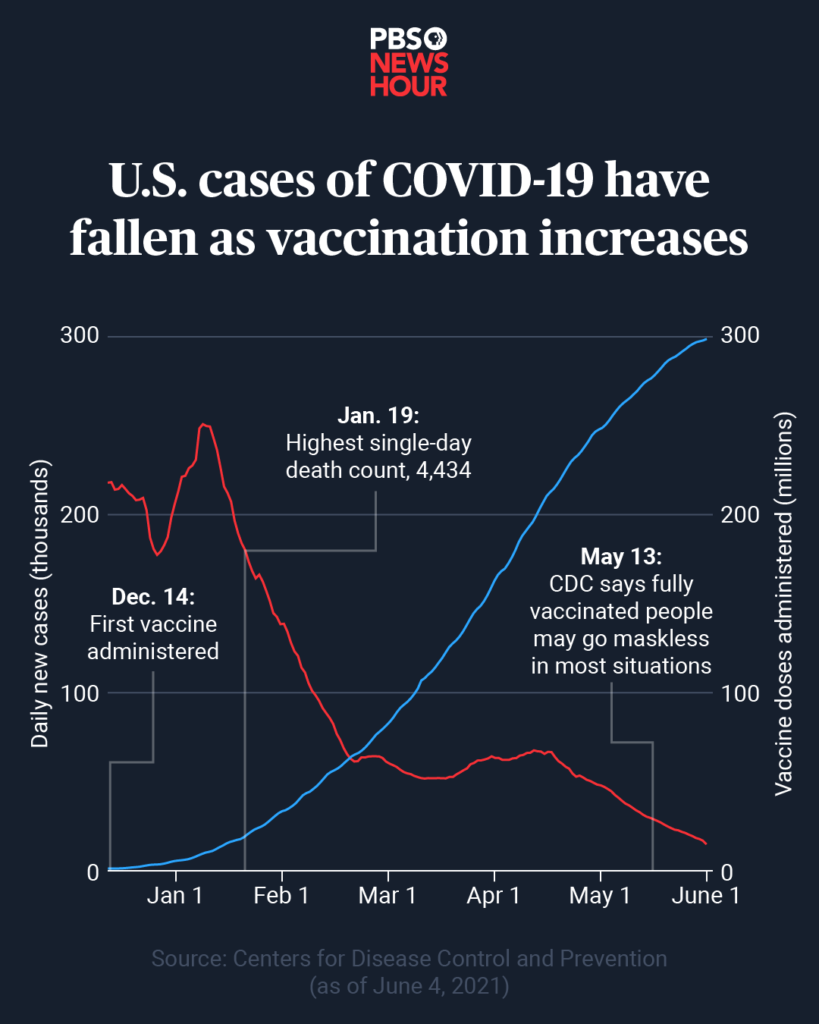 COVID-19 increasingly is becoming a young person’s disease, said Dr. Carlos Del Rio, a professor of global health at Emory University School of Medicine. Early on, some of the worst outbreaks were linked to older people — particularly in nursing homes — who were at heightened risk of severe illness and death. Now, three-quarters of Americans age 65 or older are fully vaccinated and largely protected against infection. But looking at overall vaccination rates, younger people are dragging down the average. About half of people age 12 and older are fully vaccinated, even as more transmissible variants circulate.

“Your biggest risk right now still is not being vaccinated,” Del Rio said.

Racial disparities in deaths and vaccinations 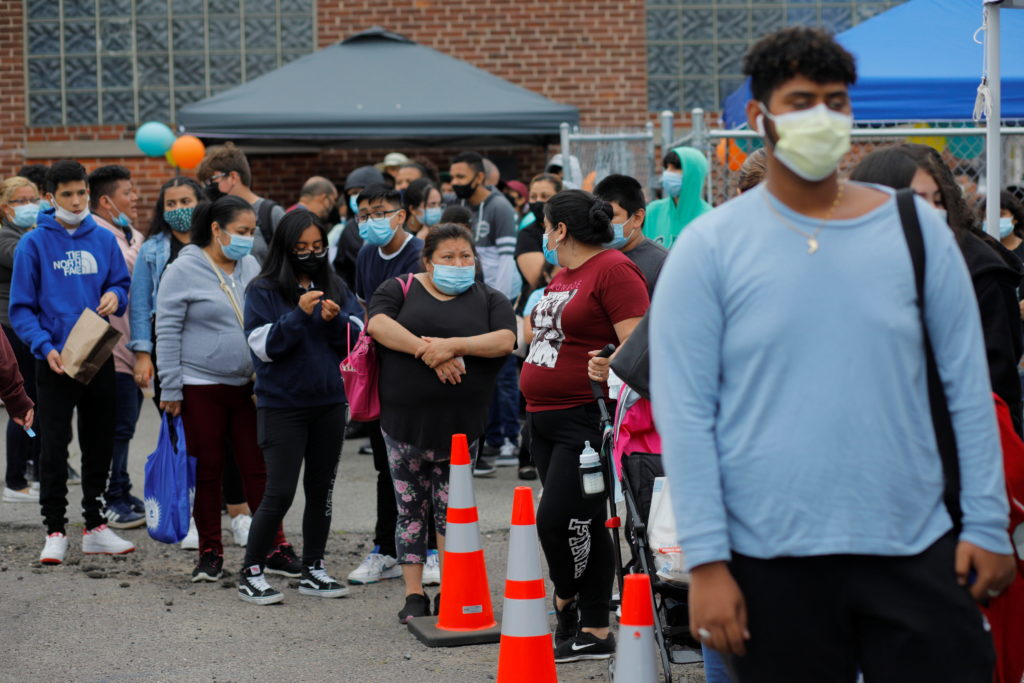 When Black and Latino communities suffered and died disproportionately during the pandemic, it served as a reminder of the role racism has played in creating generations-old gaps in health care. The Biden administration pledged to make health equity a cornerstone of its pandemic response, including the way vaccines were distributed. That is a work in progress — incremental and still uneven. The true picture of that inequity is incomplete, as historically, both during the pandemic and decades prior, states have been inconsistent when reporting race and ethnicity as part of the public health record, compared to much higher completeness of age data. It’s also not always clear what is keeping people from getting the shots, which could be factors such as difficulty getting to vaccination sites, mistrust in the medical establishment, or a failure to provide adequate answers and information.

Increasingly, disparities in vaccination may be aggravated by politics, Del Rio said, with some white people, particularly a substantial portion of white Republicans, continuing to resist calls for vaccination. For example, in Mississippi, where little more than a quarter of the state’s population is vaccinated, officials recently shipped hundreds of thousands of unused doses back to the federal government, despite ongoing campaigns and efforts to motivate more people to get their shots. For many populations, trusted messengers at the local level will play an increasingly important role in building confidence in COVID-19 vaccines, he added.

Travel is up, but not back 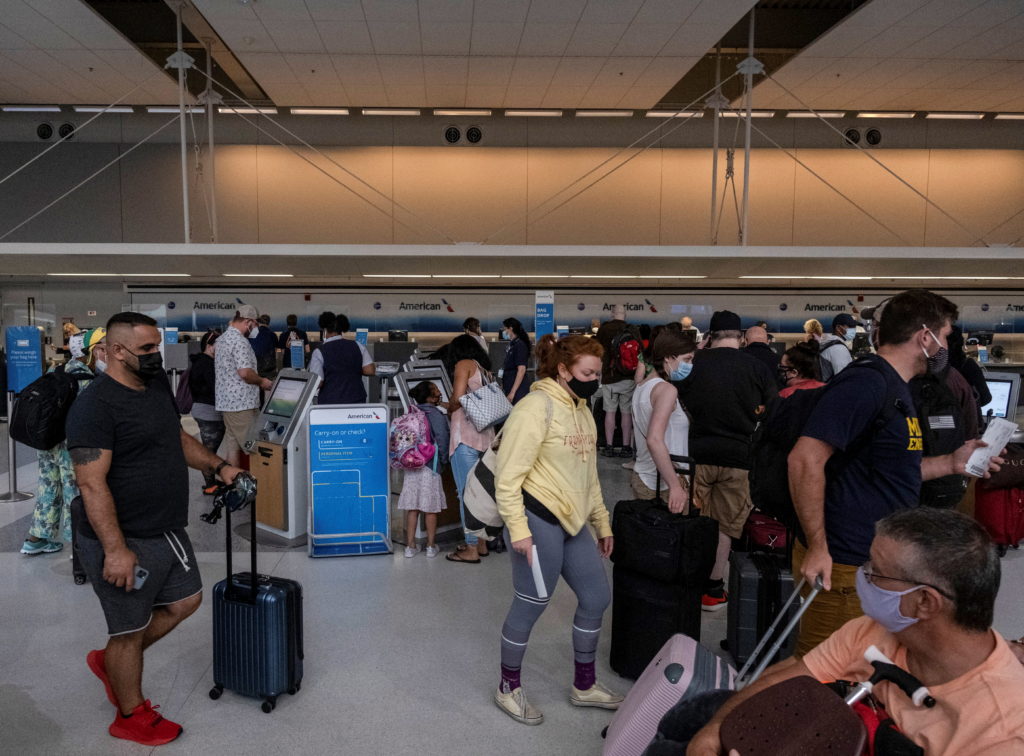 Air travel tanked during much of the pandemic. At one point, roughly two-thirds of the world’s jets were parked, said Richard Aboulafia, a contributing columnist for Aviation Week and a vice president of analysis at Teal Group. The risk of viral transmission made many people afraid to crowd into airplane cabins for long periods of time. Several countries, including the United States, put travel restrictions in place to slow the spread of COVID-19 between countries and within borders. 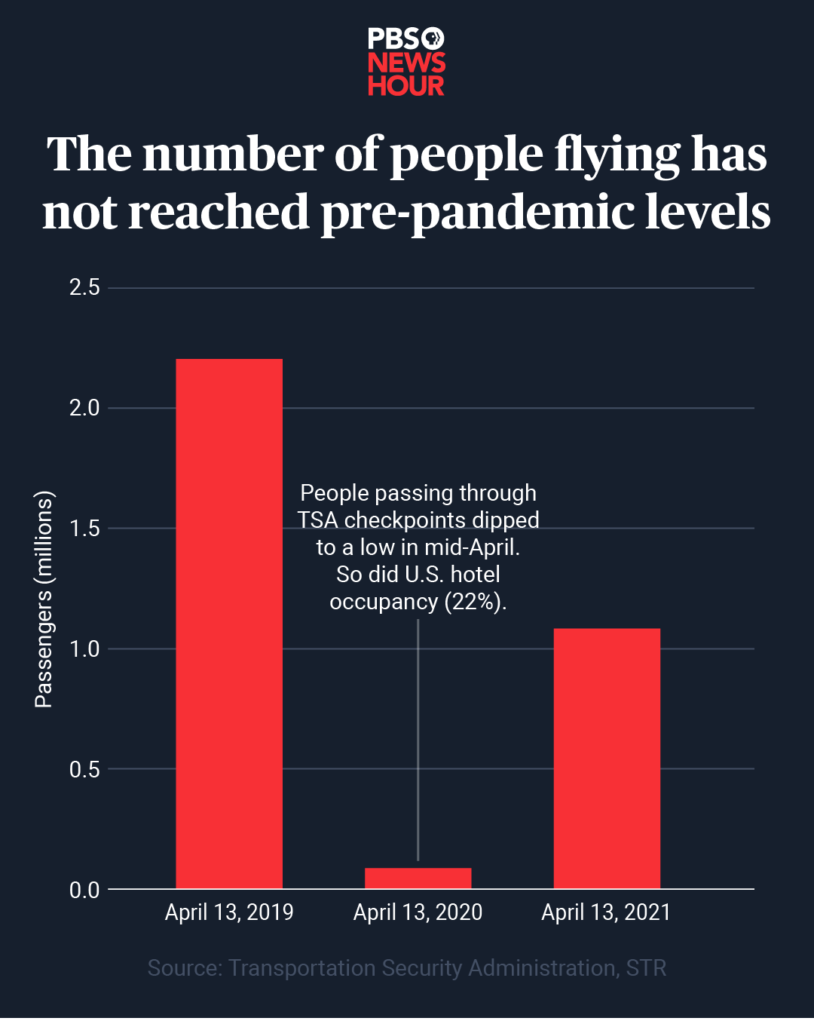 But with more people getting vaccinated and rates of new infections steadily declining, people’s confidence in traveling has grown. On June 8, the Biden administration said it will work with other nations, including Canada, Mexico, the United Kingdom and the European Union, to see what steps need to be taken to safely ramp up international travel. Air travel remains far from where it was before the coronavirus. On April 13, 2020, weeks after the Trump administration urged people to stay home, the Transportation Security Administration screened fewer than 88,000 people to board flights nationwide, down from 2.2 million passengers on the same date a year earlier. On June 13, 2021, 2 million people passed through TSA security checkpoints, almost twice as many as were screened on that date last year. That number is also gradually approaching 2.6 million passengers seen in U.S. airports the year before COVID. Early on during the pandemic, industry projections were much more dire, Aboulafia said, “In a lot of ways people were braced for the absolute worst.”

Thanks to policies that have driven economic recovery, including paycheck protection programs, Aboulafia said airlines and airports are rebounding faster than he and many other analysts expected.

Kids in the classroom 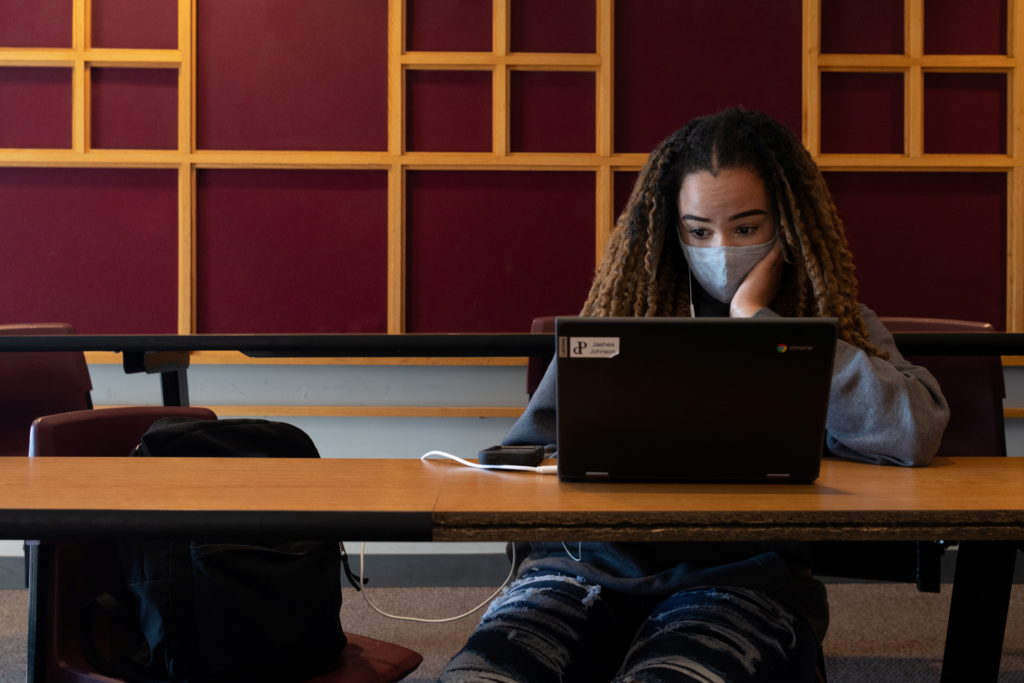 When millions of schoolchildren left their classrooms in March 2020, the following months presented unthinkable challenges for so many students, teachers and staff amid the coronavirus pandemic. Thousands of school districts scrambled to find resources and make traditional teaching plans virtual. Children and parents learned video conferencing etiquette on the fly and struggled to figure out how to negotiate internet bandwidth and complete assignments online. And so many families were left in the dark because they simply did not have access to the internet or a working computer. 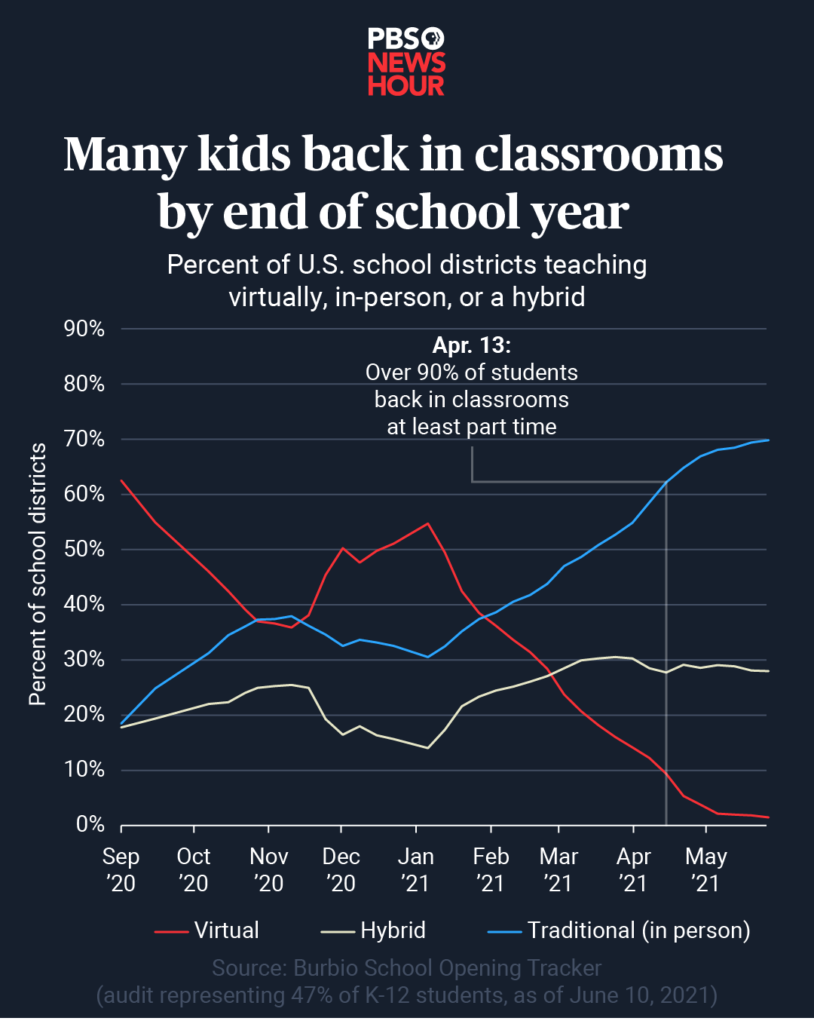 At the start of the 2020 school year, in September, 55 percent of school districts were estimated to be virtual-only, while about 19 percent were holding class in person, according to data from Burbio School Reopening Tracker, which audits about half of student enrollment in the U.S. In May, amid the U.S. vaccination campaign that now includes 61 percent of people age 12 and older who have gotten at least one vaccine dose, about 70 percent of school districts reverted to in-person teaching, while 2 percent retained virtual-only classes. 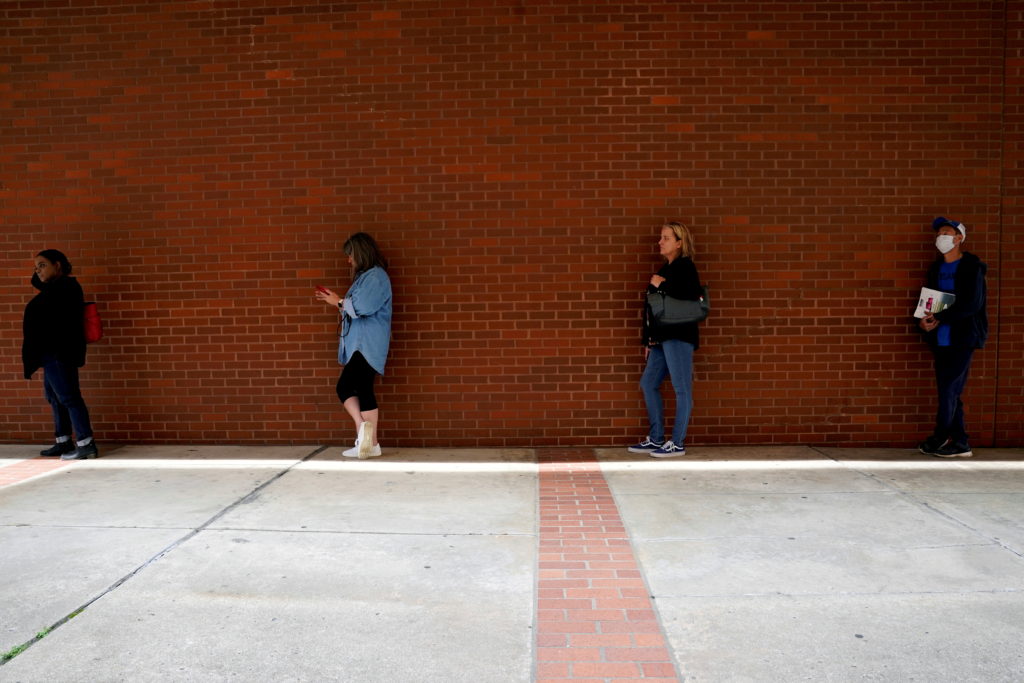 The coronavirus pandemic cratered industries that relied on people enjoying each other’s company and sharing crowded spaces together. Seemingly overnight, empty movie theaters, restaurants and concert venues stood as silent reminders that so much had changed. 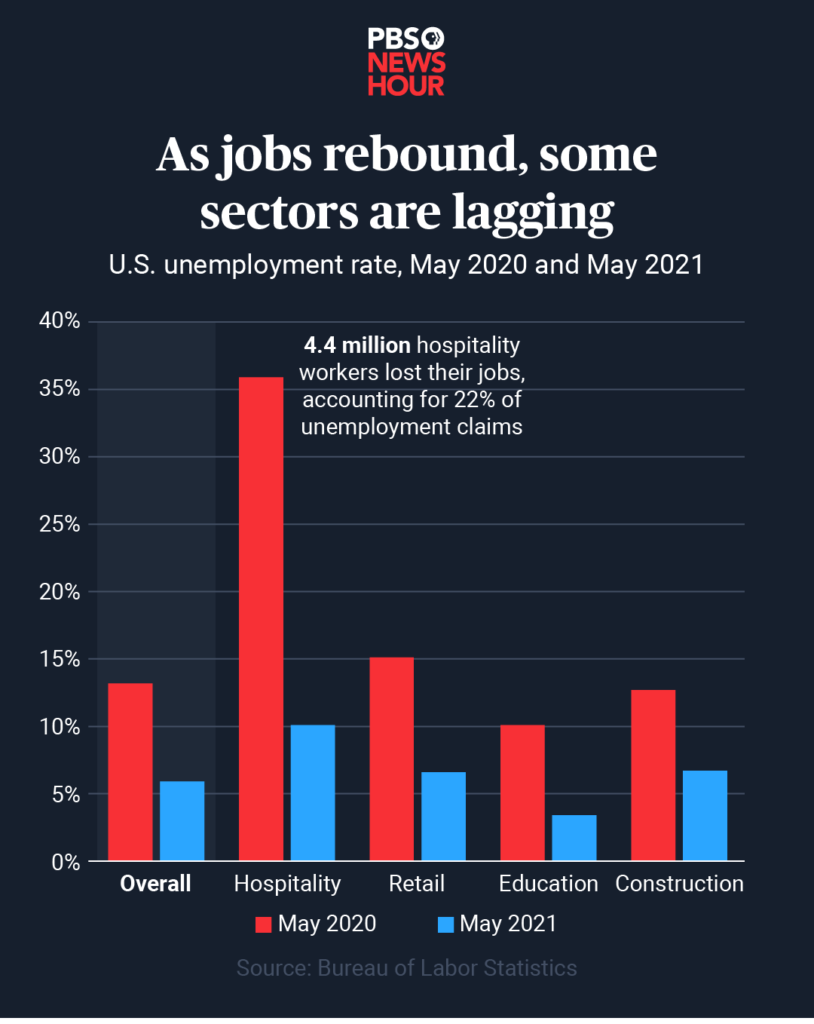 For people who worked those jobs, life became more precarious, as incomes evaporated or dramatically dropped. The hospitality industry sustained one of the biggest economic blows under COVID-19 with 4.4 million people losing their jobs by May 2020, accounting for one out of five unemployment claims, according to data from the Bureau of Labor Statistics. A year later, jobless claims have declined dramatically for workers in hospitality, retail and construction sectors, but at uneven rates, suggesting more may need to be done to boost jobs in these industries.

Restaurant employees, in particular, are still seeing unemployment rates above the average. Many restaurants were forced to rethink how they do business to stay afloat, scaling back to skeleton staff and offering contact-free ordering and pickup or delivery. Now, restaurants that survived are struggling to attract workers back.

Left: People watch a performance during a pop up event in Times Square on June 11, 2021 in New York City. New York state governor Andrew Cuomo said that most of the remaining social distancing measures would be eliminated once 70 percent vaccination is achieved. (Photo by ANGELA WEISS/AFP via Getty Images)