Millions of commuters in the U.S. continue to rely on public transit, even as the COVID-19 pandemic has forced riders to contend with social distancing and other safety measures. To adapt to the spread of the airborne virus and to anticipate a post-pandemic world in which people are still wary of close contact, transportation agencies in major cities have had to quickly change the way they plan and conduct their services.

The most obvious change the agencies have adapted is the amount of thorough cleaning required to keep passengers safe and encouraging six feet between passengers.

As more Americans get vaccinated and many start returning to workplaces, transit agencies see this transition to a post-pandemic society as an opportunity to fundamentally change how public transit works by both updating physical procedures and reevaluating the metric of success for the decades-old systems.

“There’s always an instinct to try and get back to what it was and I think we all know deep down that there isn’t a ‘back to what it was,’” said Jarrett Walker, a public transit planning and policy consultant. “We’re in that very rare moment where nobody … can seriously predict what the world is going to be like a year from now.”

For infrastructure and transit designers, this period of upheaval has given them an opportunity to explore innovative ideas to combat the possibility of future pandemics.

Ryan Teo is a senior at Northwestern University who, along with three graduate students, designed the “Futurebus” concept aiming to face that challenge. Rather than entering and exiting through one singular door, this bus design opens an entire side of the vehicle, allowing passengers to step out without coming in close contact with other riders.

Teo, who’s studying product design, said they were inspired by dandelions when they devised the layout.

“We looked at how the dandelion opens up and how the seeds dispersed in all different directions,” he said.

Teo described Futurebus as a “blue sky idea for the radical future,” but Paul Comfort, author of “The Future of Public Transportation,” said many agencies are exploring “high tech, low touch” solutions to modern transit demands, especially in light of the pandemic.

Comfort said many agencies are looking into phone-based booking options, which could minimize direct contact.

He also said transit agencies are exploring green energy vehicles to replace current buses. In early May, Sen. Chuck Schumer (D-N.Y.) announced a “Green New Wheel” plan to make all of the nearly 6,000 New York City buses run on zero emissions as part of Biden’s larger, national infrastructure plan. Although he didn’t set a timeline, Schumer said the hope is to implement this change across the country, but he said doing so may require an additional $50 billion on top of the planned $25 billion set aside for the project.

WATCH: How a rise in remote employment may impact post-pandemic work life

But most transit agencies across the country right now are not yet trying those cutting-edge technologies, but instead using the limited resources they have to adapt with more conventional updates.

Bay Area Rapid Transit (BART) might transport residents near some of San Francisco’s and Oakland’s most technologically savvy startups and tech titans, but the technology BART uses is improving on older, existing technology. After experimenting with them during the pandemic, BART is permanently adding denser air filters for its train ventilation, as well as testing UV light rods that help zap air particles.

BART is also piloting a new configuration of seats that creates more space between passengers.

The Massachusetts Bay Transportation Authority (MBTA) is updating its HVAC across its Boston network. The MBTA is also sharing live data about how crowded its buses are to riders online, on a smartphone app and on in-station screens — allowing riders to make informed decisions about the transport before they get on it. “The definition of a ‘crowded’ bus will change as social distancing restrictions ease, but crowding has long been a frustration for transit riders,” Lisa Battison, a spokesperson for the agency, said in a statement.

The Metropolitan Transportation Authority (MTA) in New York — the nation’s largest public transit network — still sees about two million people ride its subways each day, but that is compared to about 5.5 million before the pandemic. The MTA has added transparent dividers between bus operators and passengers, as well as vending machines at subway stations that sell face masks, gloves, wipes and hand sanitizer. It has also launched a pilot program to explore whether the use of ultraviolet technology might help disinfect train cars.

“[People are] going to see that the subway stations feel and smell and look vastly different than they did before the pandemic,” said Patrick J. Foye, the MTA’s chairman and CEO, told the PBS NewsHour. “That disinfecting regime we intend to continue.” 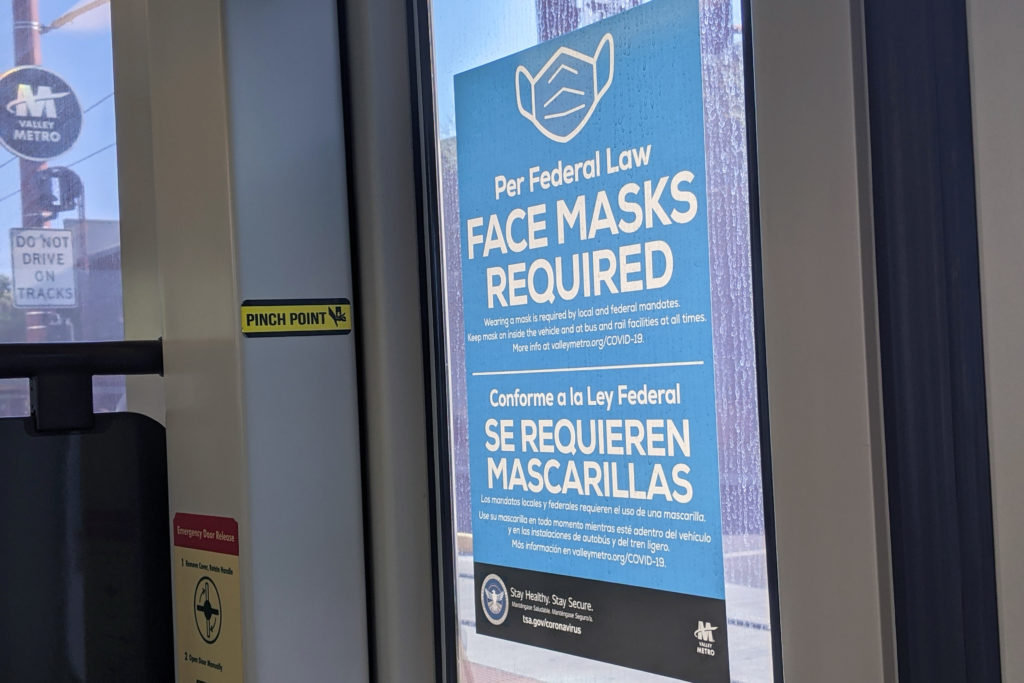 A sign in a light rail train in Phoenix, Arizona shows a face mask requirement. Photo by Justin Stabley/PBS NewsHour

In the nation’s capital, the Washington Metropolitan Area Transit Authority (“Metro”) is working on upgrading air filtration on its trains and buses, as well as providing real-time crowding information.

In a national survey from April 2020, the most widely explored solution to maintain social distancing was to simply increase service on particular routes to reduce overcrowding. But lower ridership and a smaller pool of available drivers during the pandemic has forced agencies to cut many bus and metro lines due to low turnout and a pool of fewer drivers.

“When the crisis hit, transit agencies had to downsize very suddenly,” Walker said. “It was very hard in those first few weeks of the pandemic.”

Still, Walker hopes this period of upheaval can jumpstart a serious discussion on the ways transit authorities can plan for the future and a post-pandemic world on a system-wide level.

“Agencies are starting to put services back, but they want to be thoughtful about what they put back,” he said.

Walker pointed out that a lot of resources prior to the pandemic went to handling rush hour traffic, which means many of the buses used in a day were in service a few hours in the morning and a few hours at night. The virus lockdowns, however, pushed office workers out of company buildings and into their homes, significantly reducing rush hour traffic.

Lower-income people, he said, have jobs with a wider distribution of hours, and so make up the more even spread of riders throughout the day.

“There’s a potential for a shift here from a tradition of overwhelming volumes of rush hour service, to something more like a constant, all day service pattern.”

He said this is an opportunity to evaluate where those resources should now go as many white-collar workers have a serious discussion about whether they need to go into the office at all. Despite businesses rapidly reopening across the country, over 70 percent of office employees are still working from home.

“There’s a potential for a shift here from a tradition of overwhelming volumes of rush hour service, to something more like a constant, all day service pattern,” he said.

While some agencies are exploring smartphone-based fare collecting, Comfort said some cities have removed fares altogether. The Greater Richmond Transit Company (GRTC) in Virginia eliminated fares in March 2020 to help reduce “close interactions at bus fareboxes,” said Julie Timm, the CEO of GRTC in a statement at the time.

Since then, the GRTC has depended on pandemic relief funding to sustain its services.

Timm is also an advocate for zero fares as a long-term goal, saying during the Virtual ThinkTransit conference in April that most of their ridership is from low-income households and minority neighborhoods. She pointed out that this group also largely makes up the pool of essential workers.

“The people in our service could not stay home. They had to ride, they had to get to work. They needed the income to be able to pay their rent, to buy food, to get to the hospital, to get the healthcare,” she said during her presentation.

Both Walker and Comfort believe the strongest metric for success in the public transit sector is customer satisfaction.

“A lot of transit agencies have decided … that they’re adjusting how they define their own success,” Comfort said.

Comfort said agencies have “taken a gut punch” to both ridership and revenue, and so have taken the opportunity to reevaluate their metric for success, looking again at giving riders a satisfying experience to remain “resilient and relevant” to their community.

“Ridership has been down so much because people have been told that transit systems are petri dishes for germs,” he said. “We realized that we’ve got to build a system that really meets the needs of customers.”

Walker cautioned, throughout all this future planning, that no one will be able to predict what will happen in the next year or two, whether things will fully go back to normal, or if we will see a permanent change to when and how people move around their city.

Despite this pandemic-driven pursuit for innovation, Teo is worried that the public will want to go back to normal and forget the lessons learned from this pandemic.

“In one generation, they may not remember COVID-19 the way we remember it now,” said Teo.

Left: A passenger waits on the platform to ride aboard the MTA's New York City Transit subway, in New York, U.S., May 3, 2021. REUTERS/Brendan McDermid

Vignesh Ramachandran is a digital news editor for the PBS NewsHour. Ramachandran is also co-founder of Red, White and Brown Media, focused on building media representation and sharing South Asian American stories. Previously, he was at ProPublica, the Stanford Computational Journalism Lab and NBC News Digital.