In the weeks after flooding drowned the livelihoods of families who’ve farmed along the Missouri River for generations, rural advocates in the Midwest began gearing up for another crisis.

The devastating floods increased concerns about the mental health and well-being of farmers who already were struggling with yearslong economic uncertainty. Groups in flood-affected states such as Nebraska say they are preparing to provide mental and emotional support to devastated farmers. Meanwhile, the federal government has yet to begin implementing a Farm and Ranch Stress Assistance Network that was revived in the 2018 farm bill.

Farmers have weathered years of a slow decline, but advocates worry they could crumble under the sudden pressures created by the natural disaster. Tough financial situations are a key driver of mental distress among farmers, according to experts.

“We’re in a fragile place because once you get through the flood itself and the adrenaline wears off, then the enormity of the flood and the consequences settle in,” said John Hansen, president of the Nebraska Farmers Union.

“There’s a huge emotional load if you’re the one who loses the family business, especially if that business is how you define yourself as a person,” Hansen said.

Many farmers have persisted over five years of low commodity prices, further strained by the Trump administration’s trade tariffs. Meanwhile, net farm income has fallen nearly 50% from its peak in 2013, U.S. Department of Agriculture Secretary Sonny Perdue said in written testimony to the U.S. House Committee on Agriculture in late February, weeks before the flooding.

Farm debt has risen more rapidly over the past five years, increasing by nearly a third since 2013 to levels last seen during the 1980s, according to Perdue’s testimony.

Farm families live through hope and optimism from one year to the next, but when things get tight, there’s often a rise in anxiety and depression, experts said.

University of Iowa research that tracked suicides and homicides among farmers and agriculture workers between 1992 and 2010 found that they had a higher rate of suicides than workers in other occupations.

Farm families often have held the same land for generations, and it means everything to them, said Michael Rosmann, a clinical psychologist and farmer in Harlan, Iowa, who serves the agricultural population.

When threatened with the loss of land, stressed farmers increase their workload, but sometimes the farmers become so overwhelmed they can’t sleep properly or make sound decisions. That’s when counseling helps them manage their behavior and their farming operations, Rosmann said.

“Any threat to the loss of the land, or the assets needed to farm, and farmers react by doubling down in their work ethic,” Rosmann said. “But they have learned how to take into account their behavioral well-being, so they don’t overdo it as much.”

About 55% of people who contact Rosmann are men, which shows they’re not as reluctant as they were even a decade ago when women were still more likely to seek behavioral health assistance, he said. He receives between four and 12 contacts a week. 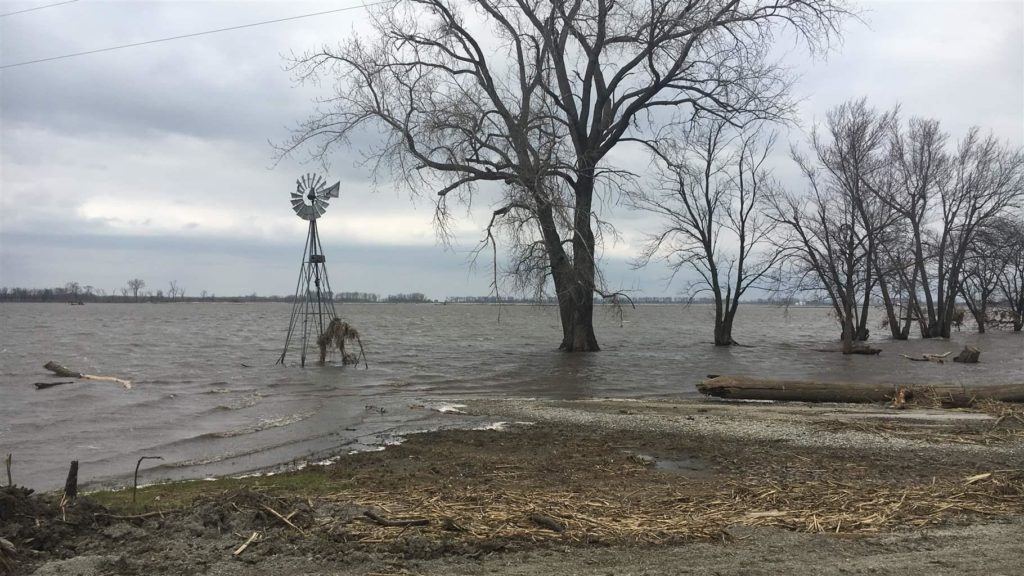 Nearly all of a family’s 2,800-acre farm flooded in Watson, Missouri, after intensive flooding in March along the Missouri River. Photo by The Pew Charitable Trusts

Difficult decisions about selling land affect everyone in the family differently, and not always at the same time, said Charlie Griffin, a retired professor with the School of Family Studies and Human Services at Kansas State University, and former member of the Governor’s Mental Health Task Force in Kansas. The loss of land can affect families over two to three generations and often results in an increase in stress and family conflict, including marital difficulties, Griffin said.

Between 1985 and 1994, Griffin was a mental health counselor with a farm hotline called Farmers Assistance Counseling and Training Service, or FACTS, which ended when farm bill funding dedicated to addressing the 1980s farm crisis dried up, Griffin said.

He went on to participate in Agriwellness’ collaborative projects, directed by Rosmann across seven Midwestern states, which ended in 2014. Each state had a helpline that advised callers on legal and financial issues, disaster assistance and accessing free counseling services, while the program provided support groups for farmers and families.

“People need help,” Griffin said. “They are not going to pull through it by cowboying it through on their own without any other assistance.”

Lawmakers acknowledged the need for mental health support in the 2018 farm bill, which President Donald Trump signed in December. The bill reauthorized the Farm and Ranch Stress Assistance Network, which was first authorized in the 2008 farm bill, but was never funded and expired in 2012.

“Times were pretty good in farm country at the time the 2014 farm bill was written,” said Matt Perdue, government relations director with the National Farmers Union, which lists resources available to farmers on a Farm Crisis Center webpage. “To be frank, there just didn’t seem to be many folks paying attention to the program.”

The Farm and Ranch Stress Assistance Network would provide mental health support for farmers via grants to state departments of agriculture, state cooperative extension services and nonprofits. They would develop stress assistance programs, including counseling, farm telephone helplines and websites, training for advocates, support groups, outreach services and activities, and when necessary, home delivery of assistance.

The floods may have stripped many farmers’ land of the soil it needs to grow crops.

Rural and farm advocacy groups sent a letter to congressional appropriators March 25, weeks after the historic crest in the Missouri River, asking for the full $10 million in funding per year.

“I think there are a number of people across the state who are waiting for that funding to come down, so they’re equipped to hire people with expertise in behavioral health,” said Griffin of Kansas.

Farmers hadn’t started the year optimistic about government assistance. Many already were anxious about late passage of the farm bill in December, followed by a government shutdown that strained the USDA and other government agencies, according to advocates.

Now, the floods may have stripped many farmers’ land of the soil it needs to grow crops, which could take years to return to production. Some farmers have been storing grain for several years in anticipation of better prices, but floodwaters eroded their land and contaminated the grain. Neither USDA disaster programs nor insurance policies cover stored grain. Crop insurance may cover inputs, such as chemical and fertilizer, but it won’t provide additional income to support households.

“It’s going to spell the end for a lot of folks who don’t have the capability to ride it out until things get rosier,” said Joe Schroeder, a farmer advocate who speaks to distraught farmers through the Farm Aid hotline, which provides support services to farm families in crisis.

Even losing livestock, for some, can affect mental stability, said Greg Ibach, USDA undersecretary of marketing and regulatory programs, at the Agri-Pulse Ag & Food Policy Summit at the National Press Club in Washington, D.C., March 18. “It’s almost like losing family in many cases,” Ibach said.

Some families have spent decades building up a herd with marketable traits and genetics, said Cora Fox, a policy associate with the Center for Rural Affairs in Lyons, Nebraska.

Farmers can expect a gap before federal funds hit. Congress went on two-week recess until April 29 without passing a disaster relief bill. Nebraska and Iowa have reported billion-dollar losses.

Nebraska, among the hardest-hit states, is preparing to boost support of farmers’ emotional and behavioral health after the historic floods.

Even before the floods, the hotline was receiving record numbers of calls for counseling outreach and mental health therapy this year.

Even before the floods, the hotline was receiving record numbers of calls for counseling outreach and mental health therapy this year, according to organizers. Year-over-year program calls increased by nearly 90% when comparing January 2018 with January 2019, according to data provided by Interchurch Ministries of Nebraska, a statewide ecumenical agency that provides the hotline alongside local partners.

Year-over-year program calls increased by nearly half when comparing February 2018 with February 2019, but dipped about 16% from March 2018 to March 2019, which organizers attributed to people taking care of their immediate needs.

“We are seeing a gradual increase, and we expect in the next few weeks we’ll have pretty close to 50% more calls than we’ve experienced in the last year or two,” said the Rev. Jerry Albright, the hotline’s administrator.

The University of Nebraska-Lincoln Extension also held a “Wellness in Tough Times” webinar April 23 for farmers and ranchers and their families. During the 30-minute webinar, attendees could ask questions privately through a chat box. 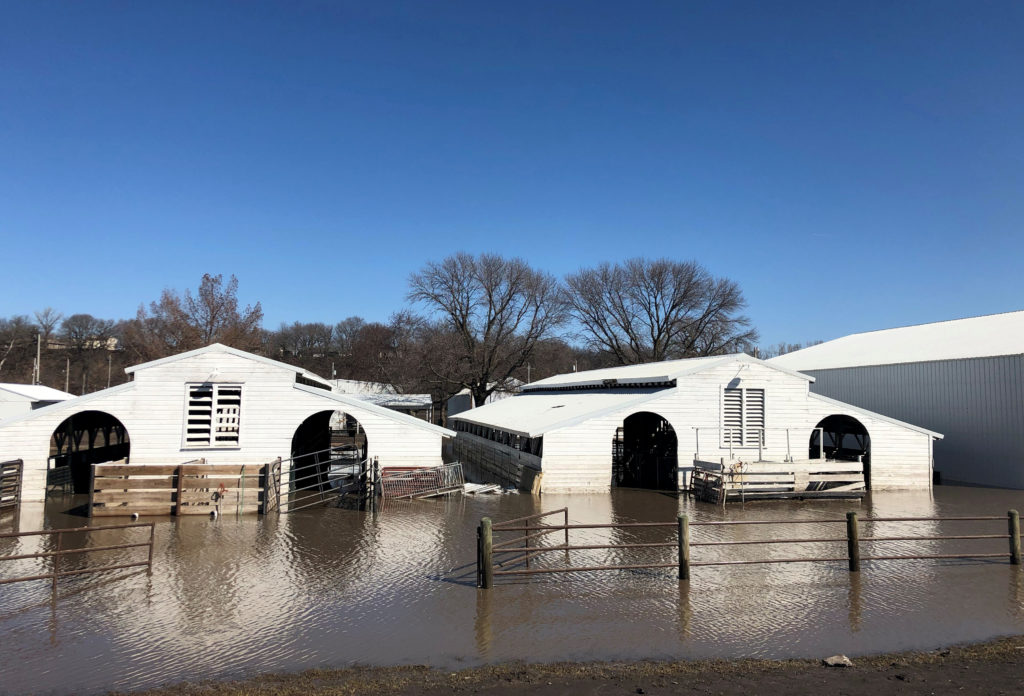 Paddocks at Washington County Fairgrounds are shown underwater due to flooding in Arlington, Nebraska, U.S., March 21, 2019. Photo by REUTERS/Humeyra Pamuk

Extension agents are planning six “Communicating with Farmers Under Stress” trainings across Nebraska, said Susan Harris-Broomfield, a University of Nebraska Extension educator focused on rural health, wellness and safety. The trainings are geared toward helping agriculture business professionals, including those in health care and banking, learn about farmer stress, how it may manifest and where to access local resources.

Bank lenders need help, Harris-Broomfield said. Many must tell farmers and ranchers they may not qualify for loans that sustain their operations. During the first training, prior to the flooding, a USDA county executive director said she had a farmer crying in her office because of financial challenges and she didn’t know how to respond, Harris-Broomfield said.

“This is exactly the kind of thing that will happen more due to the stress of the flood,” Harris-Broomfield said.

During the interactive sessions, participants will practice having awkward conversations, Harris-Broomfield said. Oftentimes people are confident meeting neighbors’ physical needs, but are afraid to ask uncomfortable questions, such as whether people are considering suicide.

“The most important thing is to not ignore someone who you think is experiencing extreme stress,” Harris-Broomfield said. “Practice active listening without judgment. There may be some awkward conversations, but this is an awkward time. Things are going to be tough and we just have to roll with it.”