Abortion has been a medical fact since the days of ancient Egypt at least. Yet there has never been a monolithic medical consensus on what to do with unwanted or endangering pregnancies in our nation, or in others, across time. Many doctors have advocated for it, or applied specific conditions for offering the procedure. The Hippocratic Oath seems to caution against it, though there has been debate about what its namesake intended.

As the nation digests Supreme Court Justice Samuel Alito’s leaked draft opinion—one that purports to strike down Roe v. Wade using antiquated pseudo-medical concepts such as “quickening”—I was reminded of Mary Amanda Dixon Jones, an American reformer, activist and physician who performed and developed several gynecologic surgical procedures in her practice during the 1880s and early 1890s. Yet, despite the advancements she made on behalf of women’s health, she adopted an anti-abortion stance that doesn’t comport with modern medicine. For Dixon-Jones, all abortions were “nefarious work.”

Abortion in America’s earliest days was more common than most people think, even though it was rarely spoken about, let alone recorded and reported in the medical literature. Other women acting as midwives often prescribed “abortifacients,” herbs and drugs that caused early contractions and expulsion of the fetus, but actual surgical abortion, where doctors (typically male) used special instruments, did not become common until the 19th century. Where it was illegal, it was only done in secrecy; in states where it was legal, it was still done furtively because so many people frowned upon it, and in some cases their religious beliefs forbade it.

Women doctors, of course, were a rare breed during the 19th and early 20th centuries. Those who did find their way to medical school often specialized in “the diseases of women and children,” or what modern physicians would call obstetrics and gynecology. The nascent field of pediatrics also attracted the few women then in practice.

WATCH: Exploring the complicated history of abortion in the United States

Born in rural Maryland on Feb. 17, 1828, Dixon Jones attended the Wesleyan Female College in Delaware, graduating in 1845. For many years, she taught women and girls in both literature and physiology, and apprenticed with doctors to study medicine. In 1854, she married a lawyer, John Quincy Adams Jones, and had three children.

Dirty instruments and hands, along with the potential piercing of organs, frequently yielded septic abortions — overwhelming infection that during the pre-antibiotic era often resulted in death.

Over the decades, she trained at the Hygeio-Therapeutic College in New York and the Woman’s Medical College of Pennsylvania, which was one one of the best female-only medical schools in the world. Dixon Jones studied pathology, microscopy and surgery and took special courses to increase her skill and expertise in these fields. She set up a practice in Brooklyn devoted exclusively to the diseases of women and became a noted expert on gynecology. 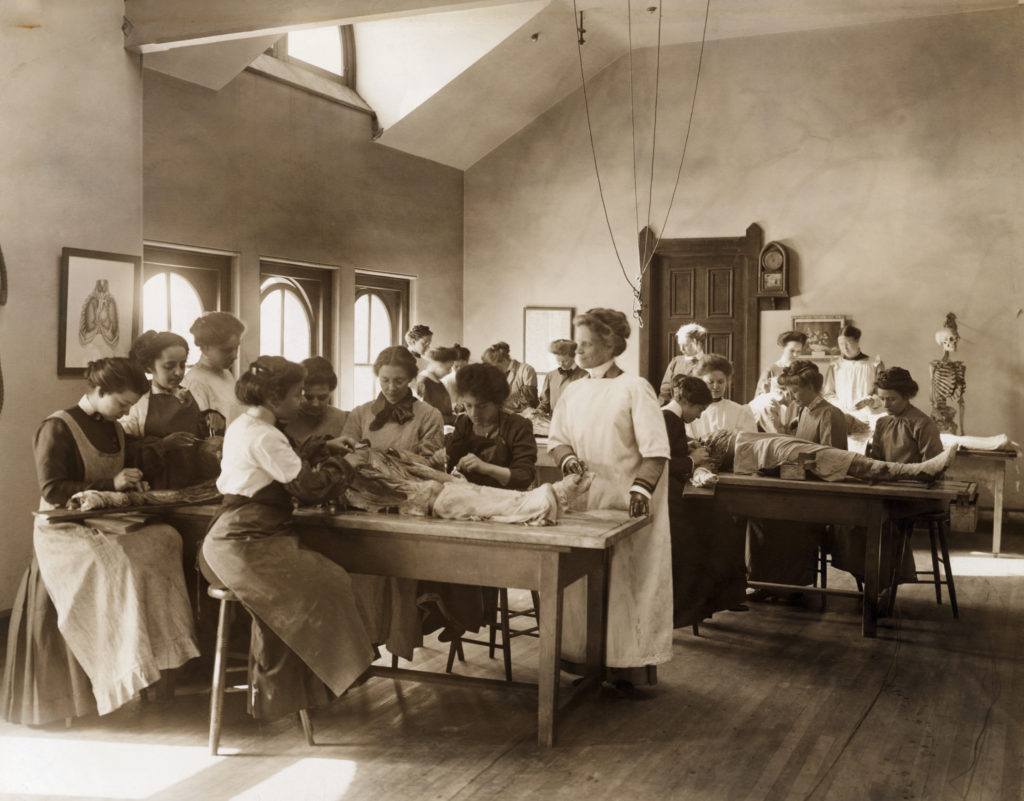 Female medical students dissect cadavers during anatomy class at the Women’s Medical College of Pennsylvania in 1900. Photo by Bettmann via Getty Images

In 1882, she took a job as physician-in-chief of the Women’s Dispensary and Hospital, where she quickly became embroiled in a series of battles with the hospital’s board of managers. Within a year, the Brooklyn hospital disbanded and, five months later, she re-incorporated her own hospital with the same name but devoted to gynecological surgery.

Among her specialties were operations to remove the ovaries, uterus and fallopian tubes for “hysteria”—the catch-all term for women who did not conform to male definitions of decorum—as well as correction of the tears and damage to the reproductive tract after difficult pregnancies. She became widely known in the medical community for publishing many articles, case reports and pathological studies in important medical journals.

She also became embroiled in a legal battle with the Brooklyn Daily Eagle newspaper, which published a highly unflattering series of articles about her work. After one of her patients died after surgery, questions about the operation and the woman’s medical care afterward led to a manslaughter trial for Dixon Jones – she was acquitted of the criminal charges, but she lost her case when she sued the newspaper for libel.

One of the most critical – and gendered – complaints about Dr. Dixon Jones was that she was “unwomanly” in her bedside manner and she was thought to be not as caring or “mothering” as a woman physician was then expected to behave. This was one of the great paradoxes of women in 19th-century medicine: They were criticized for not being manly or strong enough to do the work, and then criticized if they adopted such a manner but left their so-called soft and “feminine” qualities behind.

She lost her medical practice in the fallout from the trials, but she kept writing. On July 7, 1894, Dixon Jones published a widely cited paper on “the evils and sad consequences” of “criminal abortion” in the influential weekly Medical Record – an essay that reads like a relic to many in the historical trade. The opening paragraphs give the reader a wide, bay window into her thoughts on the subject:

In law, the term abortion is applied to the expulsion of the foetus at any period of pregnancy before the term of gestation is completed. Abortion induced at any time, or for any purpose except for the mother’s welfare, or for the preservation of the life of the foetus, is a crime and a murder. This foul taking off has been the cause of the destruction of an uncounted number of children; and had, in unnumbered instances, resulted in the death or ill health of the mother.

Indeed, poor surgical technique can cause a host of inflammatory processes to the person’s sexual organs, yielding lasting damage, pain and suffering – what Dixon Jones described as “the shock, unexpected injury, uncontrollable hemorrhage—all make a sad record in this horrible work.” Dirty instruments and hands, along with the potential piercing of organs, often yielded septic abortions — overwhelming infection that during the pre-antibiotic era often resulted in death. Many of these women who survived illegal abortions later discovered that they could not conceive because of the damage done to their reproductive tracts. In contrast, today’s legal abortions are very safe and do not cause long-term health problems except in very rare cases when complications arise.

READ MORE: Why you can thank Oliver Wendell Holmes Sr. for doctors washing their hands

When reading through this paper, one finds little or no advocacy for those situations when abortion is indicated for pregnancies threatening a mother’s health, let alone for rape or incest. Dixon Jones further insisted that the woman who “seeks the destruction of her own child, thereby perjures, and blackens her own soul, and demoralizes her whole moral being.”

It is also important to note how women of this era had no access to modern contraception, how common sexual assault was, and the dire financial and health effects of having a baby for women living in poverty, especially when there were several children already at home.

In her essay, Dixon Jones recounted dozens of anonymous cases of girls and women who came to her seeking abortions for different reasons, some of whom she said she was able to convince to have babies. The doctor had little faith in legislation and instead beseeched the medical profession to abandon the practice altogether. 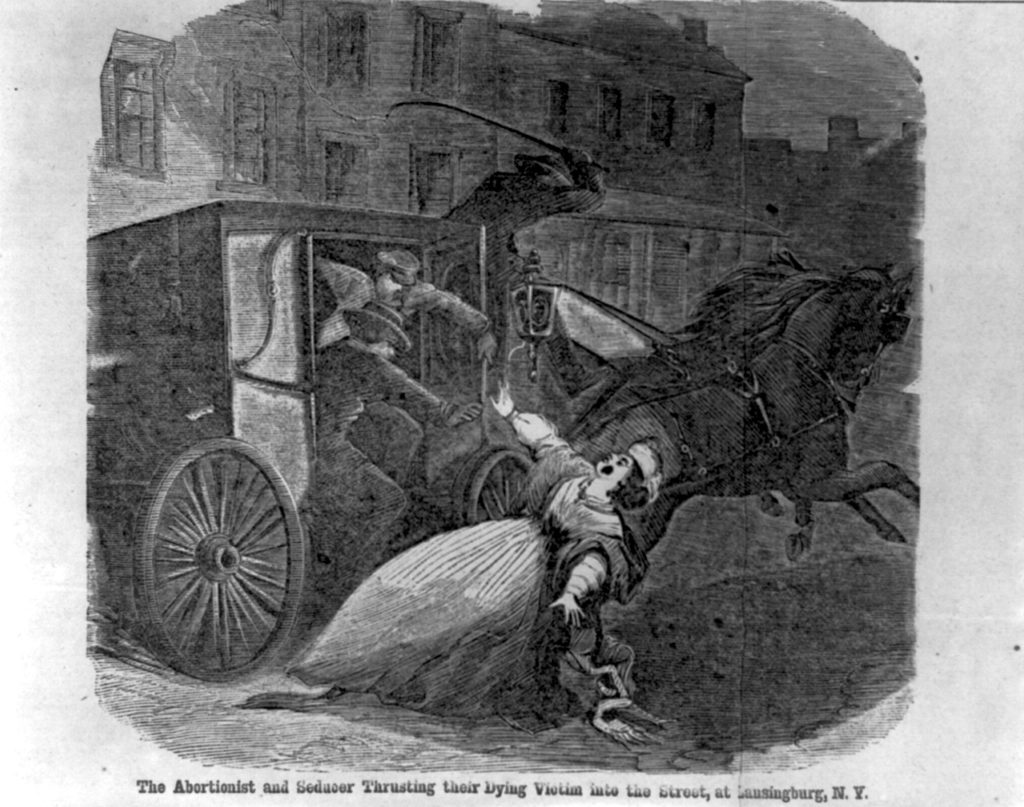 Where abortion was illegal, it was only done in secrecy; in states where it was legal, it was still done furtively because so many people frowned upon it, and in some cases their religious beliefs forbade it. An 1867 illustration depicts “The abortionist and seducer thrusting their dying victim into the street” in a town in New York state, from the National Police Gazette. Image courtesy U.S. Library of Congress

In contrast to her view, consider another study and editorial published in the New York Gynecological Journal – and cited by Dixon Jones – that concluded that the procedure was, in fact, commonly performed back then and that “we opine that the world would be better if abortion were done oftener.”

A society’s values, like medicine and law, change over time; so, too, might have the opinion of a woman’s health advocate like Dr. Dixon Jones. Most Americans support the right to legal, medically supervised abortions, with some restrictions. Norms from the 18th or 19th century do not really help us in making these decisions today – historical examples, incorrectly applied, have the power to misinform.

One way that history is informative: Abortions will continue to be performed regardless of the law of the land. If they are not conducted in a clean, convenient, supportive, patient-driven and medically sanctioned environment, the unsanctioned procedures will likely kill a great many.