While the nation grapples with post-Roe possibilities, Oklahoma is already living it, advocates say

As the lead medical director for Planned Parenthood Great Plains, which operates two of the four abortion clinics in Oklahoma, Alsaden was seeing upwards of 50 patients a day at her clinic in Oklahoma City.

WATCH: Pelosi and House Democrats speak on abortion and the Supreme Court

Demands on the clinic had grown since last September, when more people from Texas sought care following a new law that banned most abortions after six weeks of pregnancy.

Overnight, her clinic and others in Oklahoma had become critical access points for Texans seeking care. Months later, after Oklahoma’s new ban, Planned Parenthood Great Plains has stopped scheduling surgical and medical abortions in the state altogether. For Alsaden, it’s now the patients she’s no longer seeing that worry her the most.

Clinics across the state, including Alsaden’s, are rethinking how to connect patients seeking abortions to the care they need in other places, a situation clinics in other states may soon face if the Supreme Court overturns Roe v. Wade, the landmark 1973 decision that legalized abortion nationwide.

Trust Women Clinic in Oklahoma City, one of two clinics not operated by Planned Parenthood in the state, said it will continue to offer abortions up to the six-week cut off. Planned Parenthood Great Plains is still offering health services including general health care, emergency contraception, birth control and HIV services. All of the clinics in Oklahoma have stopped taking appointments and are rescheduling patients, many of whom need to make long trips to other states for care.

A state ban does not end abortion, but increases the burden and hardships on women seeking that care, said Tamya Cox-Touré, co-chair for the Oklahoma Call for Reproductive Justice.

“Just like in Texas, the impact of this ban will fall hardest on people struggling to make ends meet, people of color, and those living in rural areas,” Cox-Touré said. 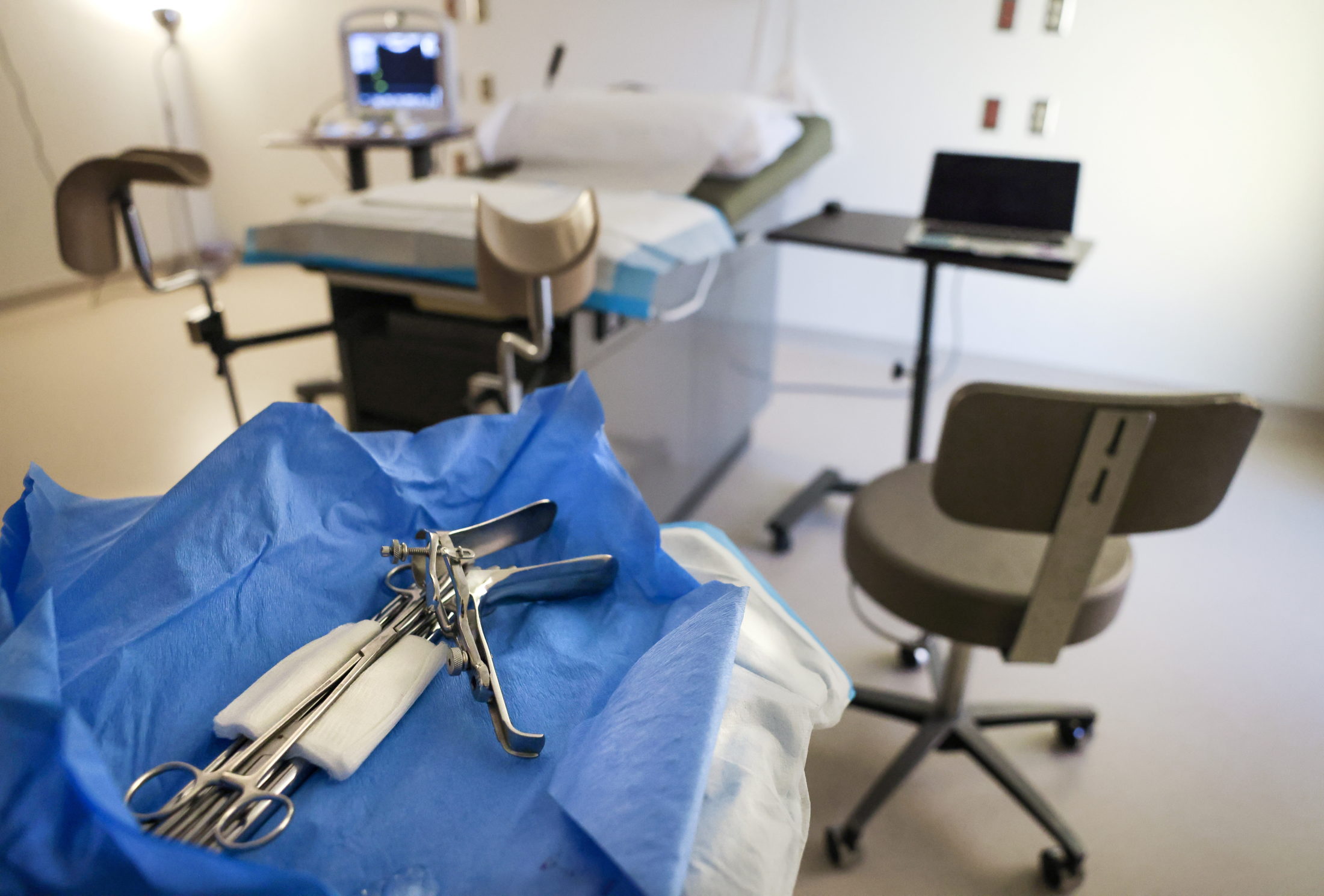 In this December 2021 photo, medical instruments are prepped prior to a surgical abortion at Trust Women clinic in Oklahoma City. Photo by Evelyn Hockstein/Reuters

Neighboring Kansas currently allows abortions up to 20 weeks of pregnancy, putting it in the position Oklahoma once held of providing care for nearby states, for now.

State residents will vote on Aug. 2 on an amendment that would overturn abortion protections in the state constitution. If approved – and if Roe is overturned by the high court in June – then the Kansas state legislature, where Republicans lawmakers currently hold with a supermajority, could pursue new abortion restrictions, including bans similar to those seen in Oklahoma and Texas.

Kansas is the only of four states covered by Planned Parenthood Great Plains that does not have an automatic “trigger law” to ban abortion should Roe be reversed.

Rebecca Tong, co-executive director of Trust Women, which has another clinic in Kansas, said the clinics were seeing a 50 percent increase in patients in recent months because of the Texas ban. Now, Tong said the Oklahoma City clinic is preparing to comply with the new state laws, while the Wichita clinic in Kansas, a five-hour round trip from Oklahoma City, is looking to expand ahead of an anticipated increase in patients from both Oklahoma and Texas.

“We plan to provide abortion care up to the legal limit,” Tong said. “We are incredibly aware of the need because our phones do not stop ringing.”

Nancy Northup, president and CEO for the Center for Reproductive Rights, said “this is just a preview of what’s to come if Roe is overturned.”

“States are already working together to create enormous ‘abortion deserts’ that many people will not be able to cross.”

Susan Braselton said the Tulsa Women’s Clinic, which still offers ultrasound screenings and medication abortions, had 22 scheduled appointments for the day after the new law went into effect. But after Gov. Kevin Stitt signed the bill, only five women were able to be seen. Braselton said those numbers continue to decrease as patients from Oklahoma and Texas now have to turn to states even farther away for care after six weeks of pregnancy.

The Oklahoma Senate is expected to vote on House Bill 4327 this week, which would effectively end all abortions in Oklahoma upon Stitt’s signature. The bill makes exceptions for medical emergencies and pregnancies resulting from sexual assault and incest, but only if those incidents were reported to law enforcement. It will likely be challenged in court.

Braselton, who coordinates a group of escorts who help walk patients and staffers to and from the clinic, said she wants patients to feel safe and secure while seeking care.

“Unfortunately, that’s feeling more impossible to do by the day,” she said.

Days before the leaked Supreme Court opinion, the parking lot for the Trust Women’s Clinic in Oklahoma City was filled with patients’ cars, many with Texas license plates.

A spokesperson for the clinic said staff were scrambling to help patients with scheduled abortions keep those appointments by helping them secure travel to other states, while still working to see people who still fit into the six-week window as well as non-abortion appointments for general reproductive health care.

Patients are often only learning of the ban when calling the clinic to schedule an appointment, said the clinic spokesperson, sparking shock, fear and anger at the thought of having to travel for the procedure. 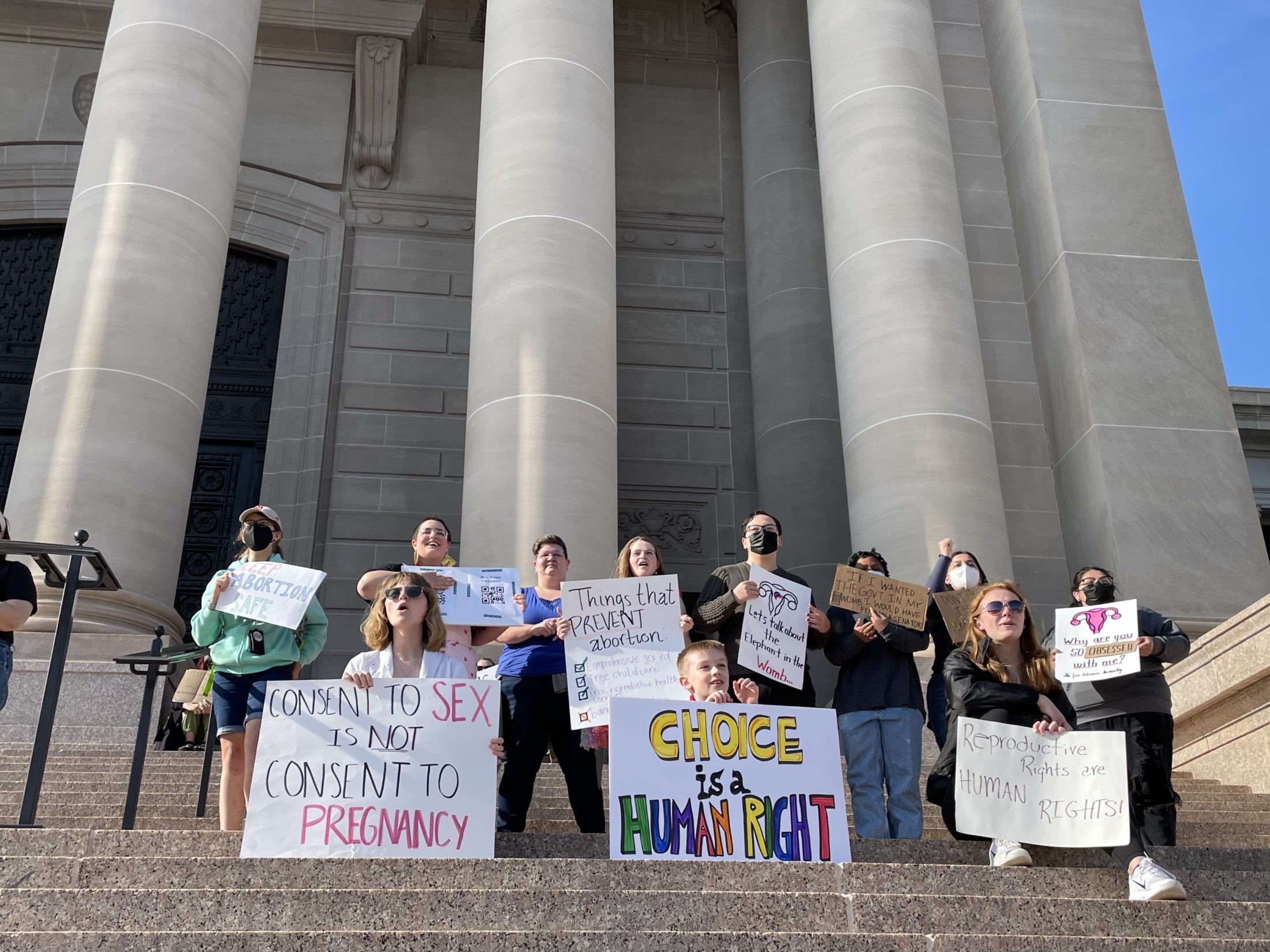 Abortion advocates hold up signs outside the Oklahoma State Capitol in a May 4 protest after Gov. Kevin Stitt signed a 6-week ban into effect in the state. Photo by Adam Kemp/PBS NewsHour

Abortion rights advocates have held several rallies since the new restrictions went into effect, including one on Mother’s Day at the Oklahoma State Capitol in Oklahoma City.

Jennifer Chancellor, a professor at the University of Oklahoma, stood outside the capitol wearing a “Don’t tread on me” shirt in the shape of a uterus, while her daughter slept in her stroller. Chancellor held a sign that read, “I made my choice, now let my daughter make hers.”

From her home in Tulsa, Morgan Kline, 23, shared her frustrations on social media.

At 19, Kline had gotten engaged and bought a house with her fiance when she discovered she was pregnant. Ultimately, she and her partner decided to keep the baby, but Kline said her perspective was forever changed.

“As someone who did have children early on, I couldn’t imagine not having the choice,” Kline said. “Knowing that you couldn’t even have any choice at all would be horrifying. You should choose the path that you would like to go down, whether it’s motherhood or it’s not.”

Anti-abortion groups have long pointed to adoption and foster care as alternatives to abortion, and they and state leaders have been asked in the wake of new restrictions how those alternatives would be supported.

Less than five miles away from the Tulsa Women’s Clinic is Birthright of Tulsa, a nonprofit clinic that pledges to offer “non-judgemental” support to pregnant women no matter age, race, circumstances, religion, marital status or financial situation.

Connie Sullivan, executive director for Birthright, said the clinic does not offer abortion options but instead offer support from clinic staff and volunteers from the first call or visit throughout a pregnancy and after.

“We love both woman and child,” Sullivan said. “The Birthright motto is that every woman has a right to give birth and every child has a right to be born. We are not political.”

“Most human struggles require and are resolved through the involvement of caring people who are willing to invest time in life-affirming solutions that do not harm either mother or baby, two separate persons,” Sullivans said. “Being wanted is not a criteria for one’s right to exist and be fully protected under the law.”

“An abortion is a medical procedure that cannot be undone,” the site reads. “We offer after abortion counseling in Oklahoma to assist you during the healing process.”

Planned Parenthood has called these pregnancy centers “fake clinics” that attempt to “trick” or influence a patient’s decision regarding sex and pregnancy.

“Crisis pregnancy centers don’t provide abortion or offer a full range of health care, and they won’t give you honest facts about sexual health and your pregnancy options,” Planned Parenthood’s website reads.

The Hope Pregnancy Center did not respond to a request from the PBS NewsHour for more information about what services will be provided to pregnant people who are carrying unwanted pregnancies.

Gov. Stitt’s office and several state lawmakers who authored anti-abortion legislation also did not respond to the NewsHour’s questions about how Oklahoma could handle the increase of potentially thousands of children in its adoption and foster care systems. Nearly 4,800 abortions were performed in Oklahoma in 2017, according to the Guttmacher Institute.

In a May 15 appearance on Fox News Sunday, Stitt was asked how Oklahoma planned to handle possibly thousands of more children in its adoption and foster care systems.

“We want the churches, we want all the services, we want the state and nonprofits to come around with adoption services and that is super, super hard, and we are going to do everything we can to help them,” Stitt said. “But aborting that child is not the right thing to do.”

Stitt was then asked how Oklahoma planned to help women carry through with a pregnancy, noting how the state is ranked 42nd in the nation for childhood wellbeing, according to a 2021 report from the Annie E. Casey Foundation.

“Is the answer to the socialist Democrat left to abort poor kids?” Stitt countered. “That’s just ridiculous to quote those types of stats. We have a free market in Oklahoma. We believe that God has a special plan for every single life and every single child and we want everybody to have the same opportunities in Oklahoma.”

The escorts Braselton oversees often try to comfort and guide patients to the door as anti-abortion protesters yell or berate them. Braselton said she’s been called a sinner, had her children threatened by name, and repeatedly told she’s going to hell for the nine years she’s worked at the Roe Fund, a statewide organization that provides emotional support and financial assistance for patients seeking reproductive services while also helping connect people to other health resources.

The fund, which is operated by the Oklahoma Religious Coalition for Reproductive Rights, has seen a huge boost in donations since the new state law and leaked Supreme Court draft opinion suggesting a majority of justices support overturning Roe. The organization received more than 800 donations in one day after Stitt signed the six-week abortion ban.

The Roe Fund has also been talking with Texas abortion advocates to learn how they helped people there seeking abortions with the ban in place and are trying to implement similar strategies by helping organize trips out of Oklahoma and into other states who can provide services.

When Oklahoma’s own ban went into effect, the anti-abortion protesters have only increased outside the Tulsa clinic. But Braselton said she’ll be there for the long haul.

“I’ll be working for this until my dying breath,” Braselton said. “I’ll be doing whatever I can to help from now until my end.”

Left: Two women from Texas talk to each other about their travel to Oklahoma as they wait in the recovery room following their abortions at the Trust Women clinic in Oklahoma City. Photo taken Dec. 6, 2021. Photo by Evelyn Hockstein/Reuters