The United States has made remarkable progress in getting people vaccinated against COVID-19. When President Joe Biden took office, he pledged to dole out 100 million shots during his first 100 days in office, a target he eventually doubled and met a week ahead of schedule. Now, nearly 320 million vaccines have been administered across the country and 53 percent of eligible Americans — more than 150 million people — have completed their vaccination series.

But the overarchingly rosy picture at a national scale doesn’t always hold up when put under the microscope. Vaccine distribution varies widely state to state, city to city and community to community.

Young people aren’t getting vaccinated as quickly as older adults

President Joe Biden set a goal to get at least one dose of a COVID-19 vaccine into the arms of 70 percent of American adults by July 4. With Independence Day around the corner, the Biden administration has conceded that the nation is unlikely to meet that target.

Instead, 65 percent of adults had received at least one shot heading into the holiday, according to the Centers for Disease Control and Prevention. During a White House COVID task force briefing Tuesday, officials stressed that if you look at just people aged 30 and older, 70 percent were at least partially vaccinated. But they predicted it would take until the holiday to reach that same milestone for adults between 27 and 30, and a few weeks after that for people 18 to 24.

The administration is focusing efforts on closing the age gap.

During Tuesday’s briefing, White House COVID Response Coordinator Jeff Zients said that many young Americans may not be getting vaccinated because they feel that the coronavirus does not impact them. But he emphasized that, especially in the face of the more transmissible, potentially more lethal Delta variant of the virus that’s spreading in the U.S., “it’s more important than ever that they get vaccinated.”

WATCH: Coronavirus Delta variant ‘may hit us pretty hard’ this fall. Here’s what you need to know

Younger people are indeed less likely to get severely ill, be hospitalized or die as a result of COVID-19 infection, Megan Ranney, an emergency department physician and associate dean of public health at Brown University, noted to NewsHour over email.

As a result, many young people don’t view the disease as an immediate threat, which makes vaccination seem less important, or not worth the effort. “They do not see the urgency,” Ranney said.

Although the country as a whole has fallen short, several states hit Biden’s Independence Day target weeks ahead of time. As of late June, 16 states and Washington, D.C. had at least partially vaccinated 70 percent or more of their populations, according to White House officials.

Some states in the West and South, meanwhile, are lagging behind. Less than half of adults in Mississippi, Alabama, Louisiana and Wyoming have had at least one shot. 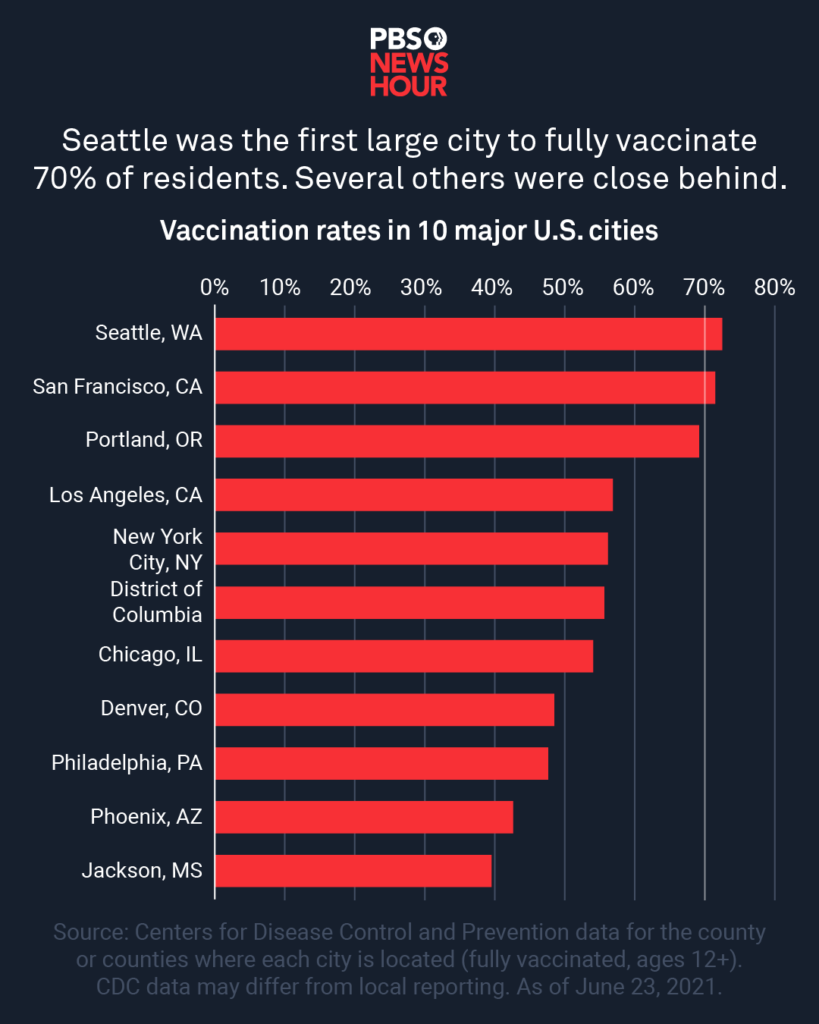 Looking at the city level, some stand out from the rest. On June 9, Seattle Mayor Jenny Durkan announced that 70 percent of city residents ages 12 and older had been fully — not just partially — vaccinated, and said that her city was the first in the nation to achieve that goal.

Comparing vaccination rates between cities can be tricky, as municipalities may track and report results differently, for instance including people of all ages, or just those 18 and over. According to CDC data, which tracks vaccinations at the county level, a handful of other cities, such as San Francisco, Portland, Oregon, and Boston, were at or approaching the same level by late June, while others were much farther behind. In Jackson, Mississippi, for example, nearly 40 percent of eligible residents were fully vaccinated as of June 22, according to the CDC.

Even in cities that have been largely successful at distributing COVID shots among their residents, more detailed numbers often reveal stark differences in terms of which racial and ethnic groups are getting vaccinated at higher rates than others.

The PBS NewsHour examined how distribution varied among these groups for cities where complete data were available. A widespread dearth in reliable statistics makes it difficult to know how equitably vaccines are being doled out, to compare different cities and states and to address disparities by increasing vaccination rates in areas where they are low.

Looking at King County, where Seattle is located, 70 percent of eligible residents are fully vaccinated, but the success is not equally shared. Among American Indians and Alaska Natives, Asian Americans and Native Hawaiians and Pacific Islanders in Seattle ages 12 and older, vaccinations are on pace with (or ahead of) the city as a whole. Among white residents, 66 percent have completed their vaccine series. But just more than 50 percent Black and Latinx residents are fully vaccinated.

Similar trends are seen in other major cities. 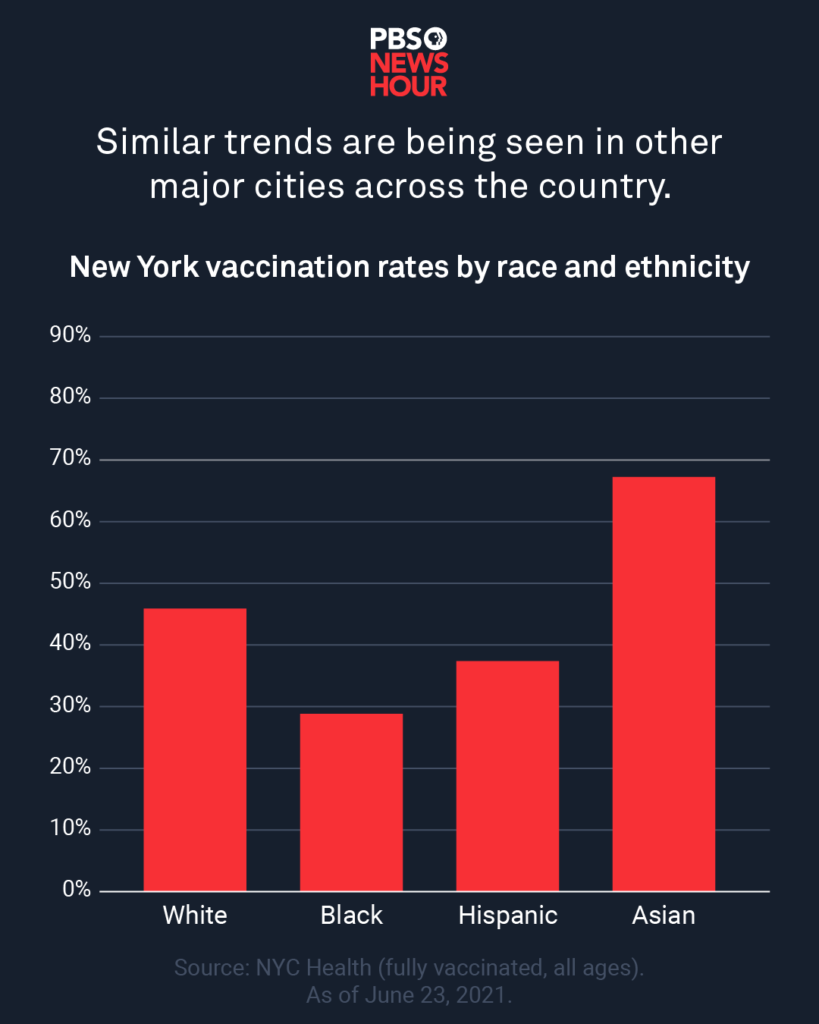 In New York City, 49 percent of residents of all ages across all five boroughs are fully vaccinated. But just 27 percent of Black residents and 35 percent of Hispanic or Latino residents fall into that category. 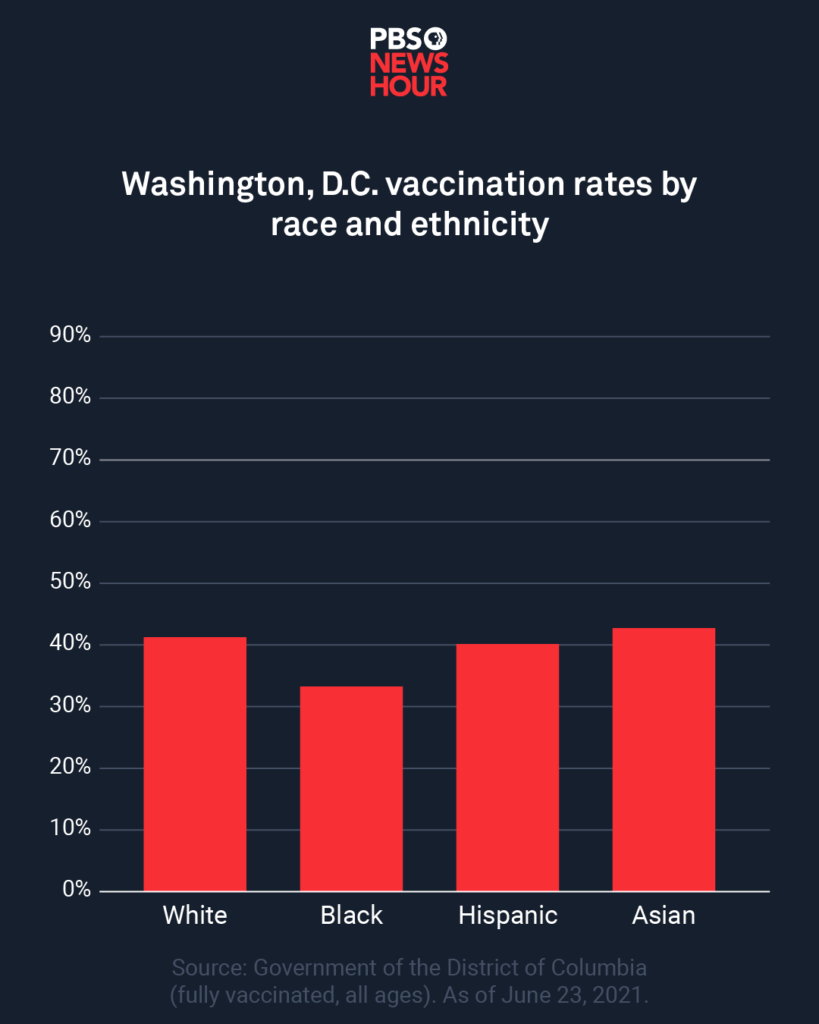 In Washington, D.C., while about a third of Asian, white and Hispanic or Latino residents are fully vaccinated, just a quarter of the city’s Black residents have completed their vaccination series. 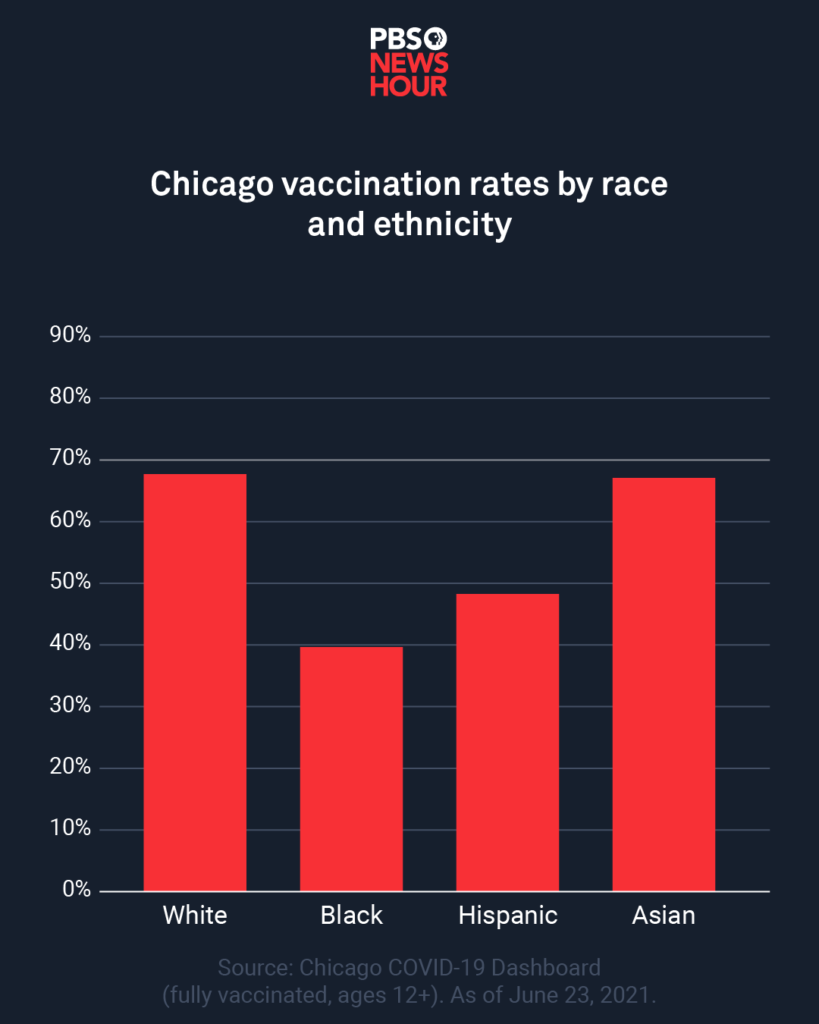 And in Chicago, around a third of Black residents and 39 percent of Latino residents are fully vaccinated, compared to around 55 percent of the city’s white and Asian residents.

Stark gaps in vaccination rates among residents of different racial and ethnic groups in these cities are reflective of a fact that has defined the COVID-19 pandemic from the start: Black and Latino, as well as Indigenous, people are more likely to be hospitalized or die as a result of this disease. If members of those groups don’t get vaccinated, the disproportionate impact that the coronavirus has had in these communities could persist.

“In public health, we start with data. And when we drill down on who, exactly, has not yet received a vaccine, then we can start identifying — and fixing — both structural and informational barriers to vaccination,” Ranney said.

Federal, state and local efforts are working to bridge those gaps in some communities. The Biden administration has launched initiatives that aim to equip trusted local figures with educational materials that can help explain the benefits of vaccination, debunk any misinformation holding people back from getting vaccinated and direct them to nearby vaccination sites.

“These racial and ethnic disparities in vaccination mirror so many other disparities in healthcare access and utilization,” Ranney added. “It is essential for us to double down on partnership with community-based health organizations and service organizations that already have the trust of, and the ability to ameliorate barriers to, vaccination among minoritized populations.”

Left: A person receives a dose of the Johnson & Johnson COVID-19 vaccine at a vaccination center in in Chicago, Illinois, U.S., April 6, 2021. Carlos Barria/Reuters