The Health Ministry on Sunday also reported 1,114 deaths in the past 24 hours, taking total fatalities up to 78,586.

Even as infections are growing faster in India than anywhere else in the world, the number of people recovering from the virus has also risen sharply. The country’s recovery rate stands at 77.77% and nearly 70,000 recoveries have been reported every day in the month of September, according to the Health Ministry.

The ministry attributed India’s COVID-19 recovery pace to aggressive testing and prompt surveillance, but experts say India needs to test more due to its huge population. It’s climbed to the second worst-hit country behind the United States, and is now testing more than 1 million people every day.

India’s Parliament is expected to resume work on Monday with strict physical distancing. Parliament adjourned in March just before a nationwide lockdown was announced to contain the pandemic.

The harsh lockdown caused a severe economic crisis, with India’s economy contracting nearly 24% in the second quarter, the worst among the world’s top economies. 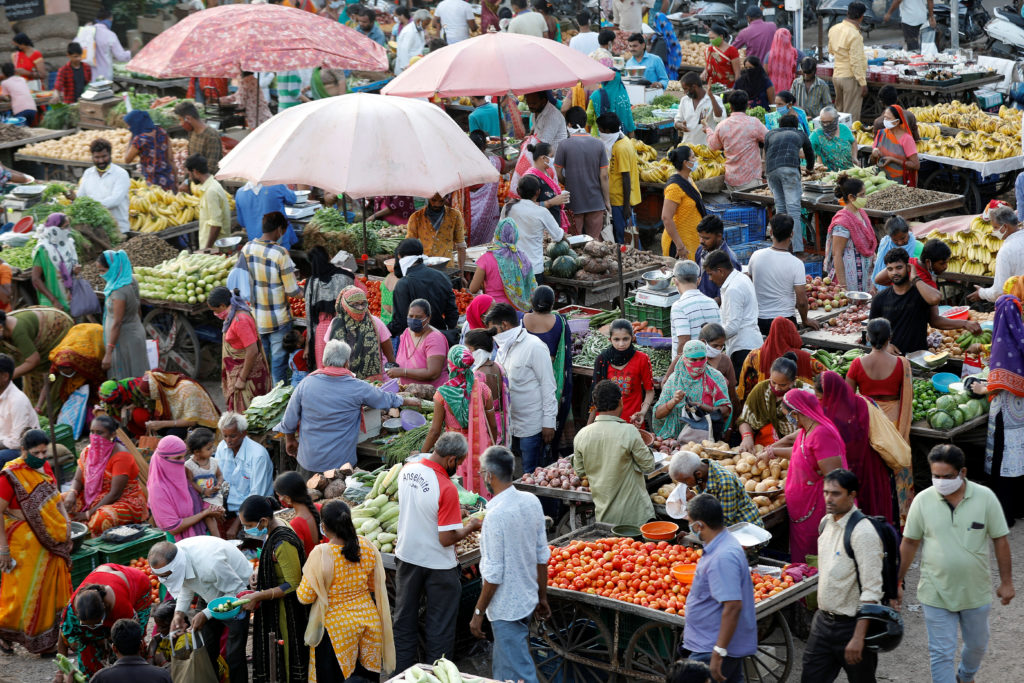 People shop at an open-air vegetable and fruit market amidst the coronavirus disease (COVID-19) outbreak in Ahmedabad, India, September 7, 2020. Photo by Amit Dave/Reuters.

In other developments in the Asia-Pacific region:

— South Korea says it will ease stringent social distancing rules in the densely populated Seoul metropolitan area, following a gradually declining number of new coronavirus infections. Health Minister Park Neung-hoo told an online briefing Sunday that the greater Seoul area recorded about 80-110 new virus cases each day last week, down from 110-180 in the previous week. Under eased rules that are effective from Monday for two weeks, Park says authorities will lift a ban on dining at restaurants after 9 p.m. in the Seoul area. They’ve been allowed to provide only takeouts and deliveries after 9 p.m. since late August.

— Domestic air travel in Wuhan, the original epicenter of the pandemic, has returned to pre-pandemic levels. The virus was first detected in Wuhan late last year and the city underwent a draconian 76-day lockdown as its hospitals struggled to deal with a tidal wave of cases that required the rapid construction of field hospitals. Since reopening in early April, life has gradually returned to normal and numbers of domestic flights serving the city, as well as the number of passengers, had both fully recovered, according to the operator of Wuhan Tianhe International airport. It says 64,700 passengers were transported aboard 500 domestic flights on Friday. The airport is preparing to eventually resume international flights to destinations such as Seoul, Singapore, Kuala Lumpur and Jakarta, Qu Xiaoni, an airport representative was quoted as saying by the official Xinhua News Agency.

— A coastal county in eastern China says seven Filipino sailors aboard a Cyprus-flagged ship have tested positive for the coronavirus and been transferred to a hospital onshore. A statement released Sunday by the government of Daishan county in Zheijiang province said it first received a notice on Sept. 9 that crew members on board the ship that was undergoing repairs had fallen ill and tested positive for the coronavirus. One close contact on shore who had delivered water to the sailors was placed under monitoring but tested negative for the virus. The seven were brought ashore and taken to a designated hospital in what the statement called a “closed loop” to prevent other infections. Their ship is being quarantined offshore, the statement said.