In the first six months of 2020, life expectancy in the United States dropped by a full year, according to new federal data. Released Thursday, these latest figures offer a staggering glimpse at the cost of the first surge of the COVID-19 pandemic, said Elizabeth Arias, a demographer with the National Center for Health Statistics who served as the report’s lead author.

Even the loss or gain of two months of life expectancy in a single year is enough to get the attention of health statisticians who study how Americans live and die.

“This one-year decline in the total population is quite large,” Arias said. 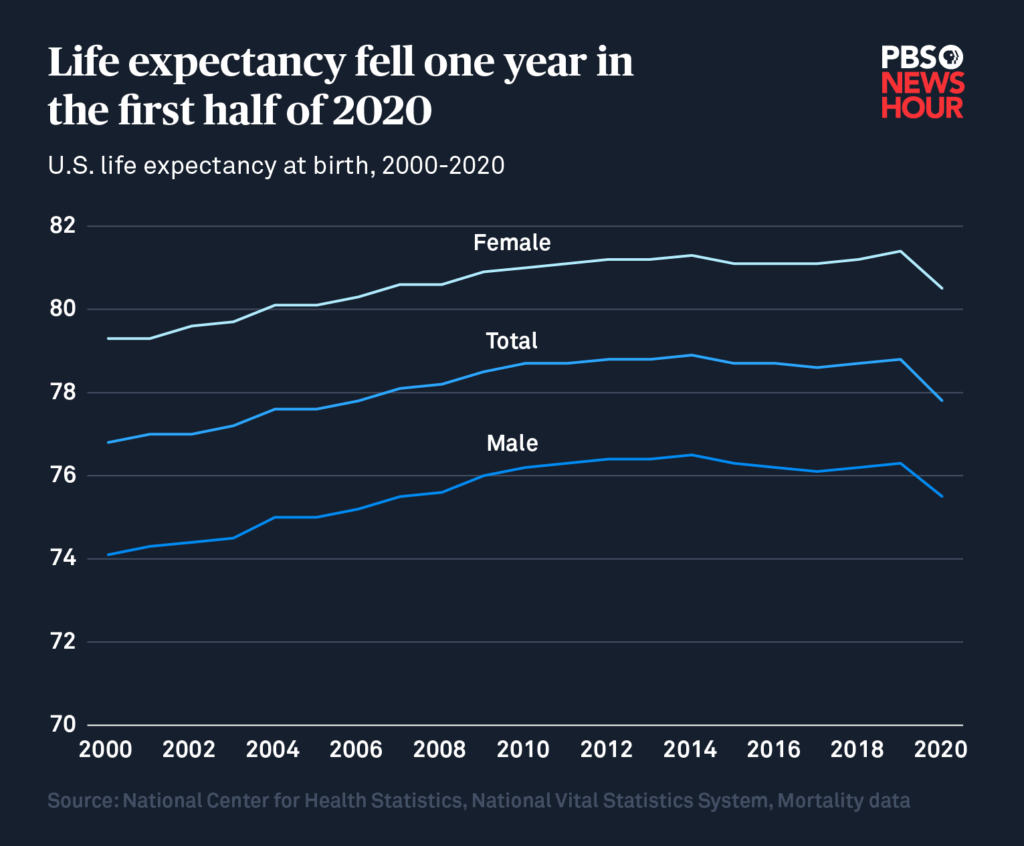 Researchers at the National Center for Health Statistics, part of the Centers for Disease Control and Prevention, made the finding by analyzing 99 percent of all U.S. deaths, as well as provisional birth records, between January and June 2020, the time period available by late October. Demographers had to dig through decades of data to find the last time the U.S. life expectancy dropped by a year or more.

Amid the devastation caused by the coronavirus, Black men are experiencing a drop in life expectancy comparable to the years 1942 and 1943, when World War II was worsening. Back then, the average American’s lifespan dropped by 2.9 years, Arias said (CDC did not start tracking racial disparities in life expectancy until 2006). During the 1918 influenza pandemic, U.S. life expectancy sank by 11 years, she added.

In the last decade, demographers and health statisticians were concerned when they saw a spike in fatal drug overdoses linked to opioid use. Those deaths typically claimed much younger people and eroded life expectancy multiple times between 2015 and 2017, alarming researchers at the time.

The most recent numbers are just the beginning of what could be a more dramatic trend. Data for the nation’s second and third virus surges, which infected and killed far more Americans than the first, are still being collected and analyzed. Arias said her agency plans to release preliminary data later in the spring that accounts more fully for how the pandemic altered U.S. life expectancy.

Evidence suggests that not all U.S. COVID-19 deaths in 2020 were correctly tied to their cause, said Samuel Preston, a demographer and professor emeritus of sociology at the University of Pennsylvania. Health experts have said for months that the pandemic’s official death toll is an undercount. And a substantial portion of deaths in 2020 may also have been linked to people delaying medical treatment or forgoing care for non-coronavirus illness because they were afraid of becoming infected with the virus, he said.

“The epidemic is having a lot of impacts over and above” the deaths that are being counted as COVID-related, he said. 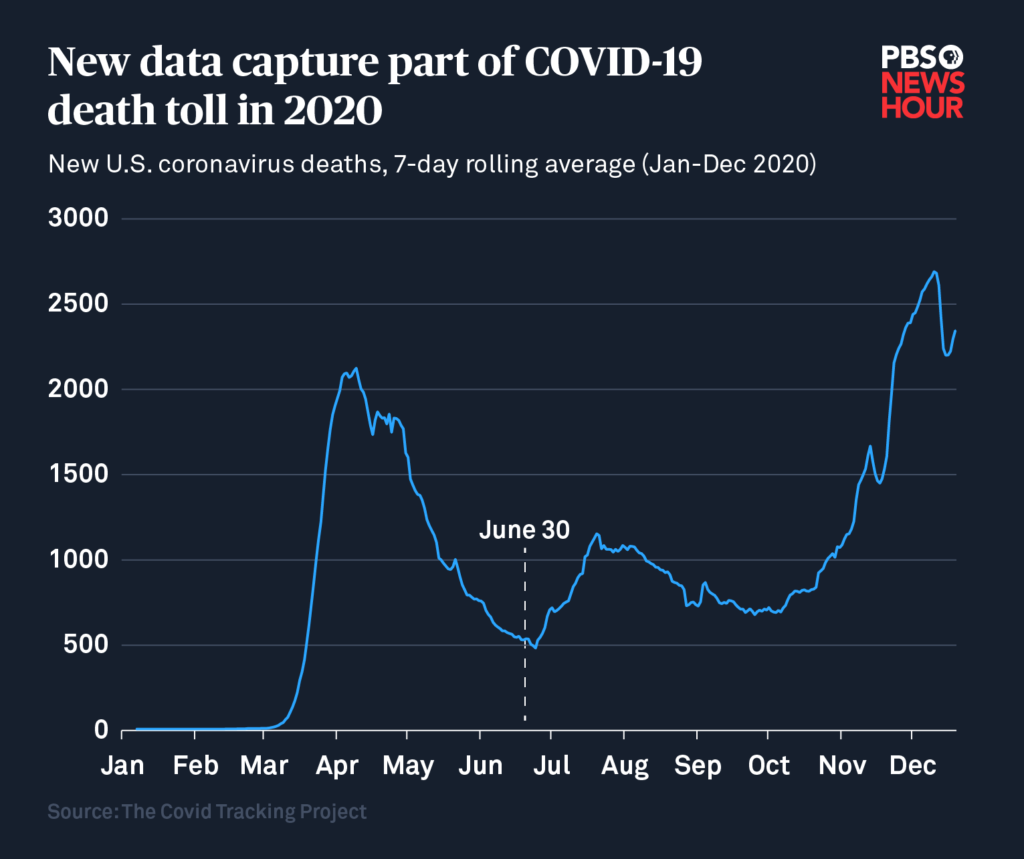 These latest CDC data support projections published earlier this month in the Proceedings of the National Academy of Sciences. Using provisional CDC data on COVID-19 deaths and projections from the Institute for Health Metrics and Evaluations, that study estimated that U.S. life expectancy had dropped by 1.1 years. Noreen Goldman, a professor of demography and public affairs at Princeton University’s Office of Population Research and co-author on that paper, said she is “fairly convinced” the estimates put forth by both reports “are too low.”

Communities of color have suffered disproportionately throughout the pandemic, and these latest numbers further illustrate the magnitude of those disparities. Reflecting the many ways racial inequality in the U.S. has been highlighted over the past year, the life expectancy gap between Black and white people has also widened.

As one example, while the life expectancy of a white man dipped by eight-tenths of a year during the first six months of 2020, three years were shaved off the life of a Black man.

For decades, Black people had been gaining in life expectancy, edging closer to that of white people, thanks in part to long-running trends in increased access to health care, improved social mobility and greater economic stability, Arias said.

It takes a long time for progress in health equity to prolong people’s lives, she said. In 1900, less than a half-century after the end of slavery, Black Americans were dying an average of 14 years sooner than white Americans. By 2019, that gap shrank to 4.1 years. 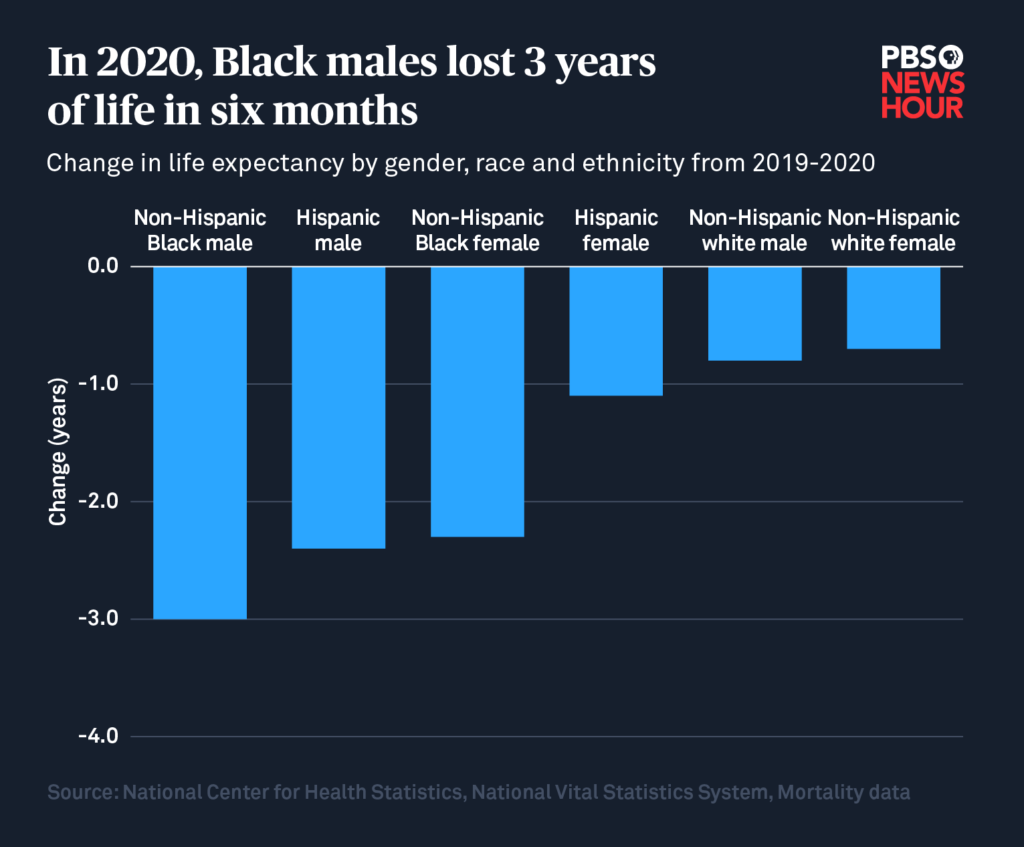 That gap has expanded again — to six years — six months into the coronavirus pandemic. Significantly higher rates of COVID-19 mortality within the Black community are driving the decrease for that demographic, Arias said.

Such a stark contrast is no blip in the data and exposes long-standing issues in the U.S., Goldman said. People of color are more likely to be essential workers and are, often in industries that experienced deep job cuts or those that could not be performed remotely during the pandemic, Goldman said. They are also more likely to lack access to health care than white people, she said. Goldman added that communities of color have been diagnosed at higher rates than white people with chronic health conditions that are tied to worse outcomes among those infected with COVID-19, such as asthma and diabetes.

“This kind of excess mortality is representing structural inequalities that have existed for a long time that increase both the risk of exposure to virus and the risk of dying from the virus,” Goldman said.

As the nation continues to combat the coronavirus pandemic, Dr. Carlos Del Rio, a professor at Emory University, said it is critical that the U.S. focus on building health equity. These latest data underscore that the pandemic has been “bad for the United States, bad for the population and bad for the economy,” he said.

For the country to recover, Del Rio said the Biden administration must continue to build its COVID-19 response upon a foundation of improving equitable access to health care and expanding distribution of coronavirus testing, treatment, facilities and vaccines, particularly to communities of color that have been disproportionately cratered by the pandemic. Improving these numbers “is not just a matter of giving out a vaccine and be done,” he said.

“What we’re seeing here is we have to focus more than ever on health equity,” Del Rio said. “These disparities are unacceptable.”

Left: A funeral director moves a casket of a victim of COVID-19 in East Los Angeles, California. File photo by PATRICK T. FALLON/AFP via Getty Images