Why new coronavirus variants emerge, and what that means for you

The devastating spike in new daily COVID-19 cases in the United States has slowly begun to come down, and vaccinations are starting to protect millions of the country’s most vulnerable people.

But any respite from the pandemic’s worst chapter so far could be turned back — or made worse — by new coronavirus variants that experts say may present a variety of challenges to getting the virus under control.

Three specific variants have raised alarm bells so far: B.1.1.7, which was identified in the United Kingdom, B.1.351 in South Africa, and P.1 in Brazil, all of which have been detected in the U.S. Experts believe that B.1.1.7. could be as much as “50 to 70 percent more contagious” compared to past variants, which means more people are likely to get infected.

That could pave the way for more hospitalizations and, eventually, more deaths, as England has suffered in recent months. There, a massive uptick in cases traced back to the new variant left hospitals struggling to accommodate the nation’s ballooning number of COVID-19 patients, and the country set new records for the national daily death toll. The Centers for Disease Control and Prevention has warned that B.1.1.7 could become the dominant variant in the U.S. by March.

B.1.351 has sparked concern over its apparent ability to affect the performance of Moderna and Pfizer-BioNTech’s respective COVID-19 vaccines, but there’s so far no evidence that it renders either vaccine completely ineffective. P.1, meanwhile, is troubling because it emerged and spread widely in a Brazlian city whose population had already been ravaged by the virus, pointing to the possibility that it could cause reinfection. According to the CDC, these variants also appear to “spread more easily and quickly” compared to others.

“When you have infection levels this high, you’re giving the virus a lot of chances to adapt itself.”

“These variants can change the course of this pandemic, and that is definitely concerning,” said Dr. Krutika Kuppalli, an assistant professor of medicine at the Medical University of South Carolina.

It’s normal for a virus, especially one circulating as widely as the coronavirus is now, to mutate over time.

“When you have infection levels this high, you’re giving the virus a lot of chances to adapt itself,” said Ryan McNamara, a researcher at the University of North Carolina School of Medicine.

Most mutations don’t change anything significant about the virus or the disease it causes, and some can even be detrimental. But sometimes, useful mutations crop up that, under the right circumstances, may allow that version of the virus to spread better than it has in the past.

WATCH: Face masks aren’t going anywhere soon. Are you getting the most protection?

Researchers are still evaluating how exactly these variants differ from their predecessors, as well as how they impact the effectiveness of existing treatments and vaccines for COVID-19, including those that have yet to be authorized in the U.S. A January study from the United Kingdom suggested that B.1.1.7 may cause more severe cases of the disease, but the CDC emphasizes that “more studies are needed to confirm this finding.”

Beyond the concerns about rising hospitalizations and deaths, yet another spike in cases could mean that the U.S. sees a growing proportion of “long-haulers,” or patients whose symptoms persist for months after their initial infection, Kuppalli said. That condition can also take a significant toll on the nation’s health care system, not to mention the quality of life and emotional well-being of patients themselves, she added.

Even against the frightening prospects raised by the new variants, the U.S. is by no means powerless. During a Jan. 21 news briefing at the White House, Dr. Anthony Fauci, the nation’s top infectious disease specialist, emphasized that he and other experts “are paying very close attention” to these variants, and added that “there are alternative plans if we ever have to modify the vaccine.”

Here’s a look at how viruses mutate, and why tracking new variants and stepping up your own personal precautions are key to controlling the pandemic.

How do viruses mutate?

When the coronavirus infects a new host, it uses that person’s cells to make copies of itself. Some are bound to have errors, or mutations, in their genome that make the copy slightly different from the original virus that caused the infection.

What you can do to protect yourself

“When we’re talking about the accumulation of mutations, we’re not trying to instill fear into the public,” said Ryan McNamara, a researcher at the University of North Carolina School of Medicine.

The virus is still adapting to its new host — humans — and the “more times we give it to adapt further to more efficient human-to-human transmission, it’s going to take that opportunity,” he added.

That means that slowing the spread is how we prevent more mutations. Vaccines will help, but so will doubling down on public health measures.

“Viruses mutate all the time,” said Stanley Perlman, a physician and coronavirus researcher at the University of Iowa. “And most of the time, these mutations don’t go anywhere because they don’t help the virus. In fact, some of them may kill the virus.”

But mutations can also give the virus an advantage.

In the context of this pandemic, that normal virus replication process has been driven by the more than 100 million people worldwide who are known to have been infected over the past year or so. That means the virus has had ample opportunity to acquire mutations and, potentially, become better at infecting us. All three variants on the CDC’s radar have mutations in their spike proteins, which are the part of the virus responsible for successfully invading our cells in the first place.

This isn’t even the first time that the virus has mutated to become more infectious since the pandemic began. According to the World Health Organization, the first coronavirus strain initially detected in Wuhan was replaced by ones that carried a specific mutation called D614G.

The journal Nature reported that by June of 2020, “the D614G mutation was found in almost all [coronavirus] samples worldwide.”

Multiple research teams in the U.S. found last fall that that mutation altered the virus’ spike protein so that it could better enter and infect cells. They determined that it allowed the virus to replicate faster and become more transmissible, but that the mutation may also have rendered it more vulnerable to being neutralized by the antibodies people acquire through vaccination.

A virus’ main goal is always going to be to “sustain” itself, McNamara explained, and this particular pathogen has been infecting humans for a fairly short amount of time. The relatively large number of variants the world has detected over the past year or so, he said, indicates that the coronavirus is still adapting to its new host. The only way we can obstruct that natural process is to halt the spread of the virus itself.

What the U.S. can do to keep variants at bay

Some countries conduct regular, random genome sequencing of the virus when someone tests positive within their borders, giving researchers an idea of which variants are dominant and where they’ve spread.

Compared to other nations, the U.S. has not implemented as robust a nationalized sequencing program. According to the Associated Press, “less than 1 percent of positive [virus] specimens” are sequenced here, whereas “Britain sequences about 10 percent.” 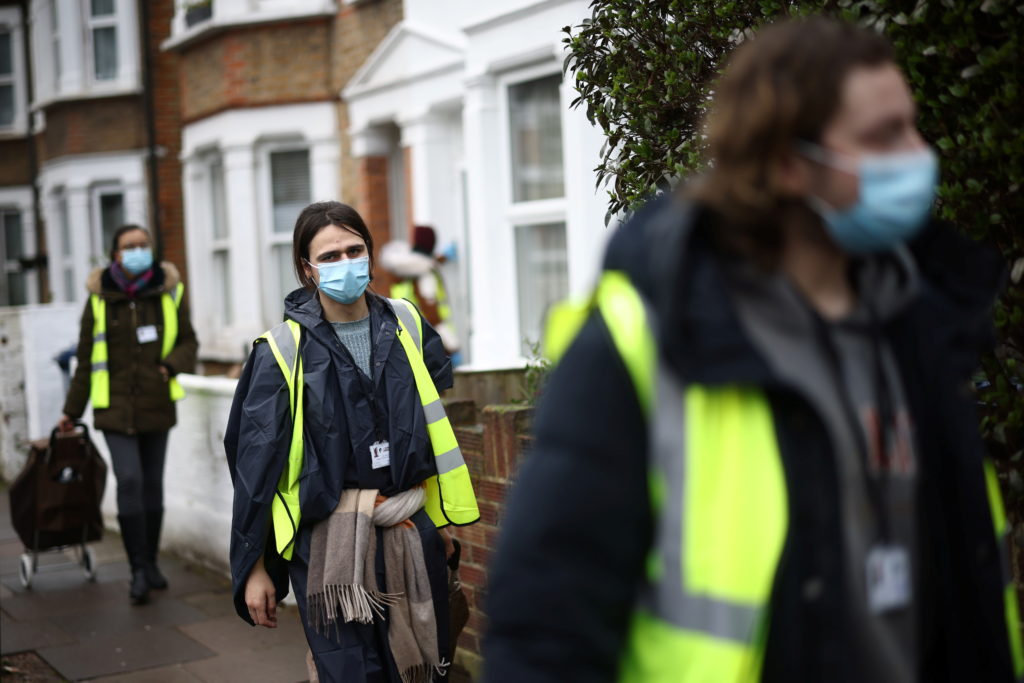 Experts say the U.S. could and should do more, given the amount of virus circulating and the possibility that a new, notable variant could also originate in the states. Researchers are already keeping an eye on one, dubbed CAL.20C, that was first detected in California last month.

The CDC has said it is ramping up its sequencing efforts, including collecting 750 samples of the virus per week from “state health departments and other public health agencies” for sequencing.

Vaccination will undoubtedly remain as crucial of a public health tool as ever, and it’s unlikely that any new variant would completely erase the high levels of protection offered by the two vaccines authorized for emergency use. Pfizer and BioNTech have stated that their vaccine appears to still be protective against “key mutations” in both B.1.1.7 and B.1.351.

The companies are also in the process of developing booster shots that could improve immune responses against new variants of the virus, as Bloomberg News first reported. Moderna announced in late January that it expects its existing two-dose vaccine regimen “to be protective against emerging strains [of the virus] detected to date,” but plans to test a “booster candidate” that would provide more protection against B.1.351 “and potentially future strains.”

Both vaccines induce a “polyclonal” response, meaning that they prompt the body to create several different types of antibodies that target distinct parts of the virus. The virus would have to “modify itself extensively,” McNamara said, in order to fully evade protection generated by a vaccine.

Variants have already demonstrated an ability to partially reduce vaccine efficacy. According to Reuters, the vaccine developed by Johnson & Johnson — which the company reported had an overall efficacy of 66 percent — returned different results depending on the region where it was tested during clinical trials. In the U.S., “efficacy reached 72 percent,” but in South Africa, where B.1.351 “made up 95 percent of the COVID-19 cases reported” during that trial, efficacy reached 57 percent.

According to the World Health Organization, the term “vaccine efficacy” refers to the percent by which the incidence of disease is reduced in those who are vaccinated compared to those who are not. In other words, it focuses on prevention. But in addition to preventing disease entirely, vaccines can also decrease a person’s chances of becoming seriously ill. Reuters noted that Johnson & Johnson’s vaccine was 89 percent effective at “preventing severe disease in South Africa.”

The existence of coronavirus variants underscores the importance of vaccinating the American public as quickly and efficiently as possible.

According to Fauci, the existence of coronavirus variants underscores the importance of vaccinating the American public as quickly and efficiently as possible.

“If we can implement our vaccine programs with the vaccines that we currently have and bring the level of virus replication and dynamics in the community to a very low level, the virus will not mutate as efficiently as it does when you have an explosion of infections,” Fauci told PBS NewsHour’s anchor and managing editor Judy Woodruff.

The fact is, to stop these variants from spreading, and to decrease the probability that new ones will emerge in the U.S., we already have the tools we need: the same pandemic precautions that have been in place since the nation first locked down in March of last year.

“We know how to prevent spread to some extent — to a lot of extent — and by preventing spread, we prevent the disease,” Perlman said.

Strictly adhering to protocols like social distancing, limiting contact with those outside of our households and wearing a mask reduce the opportunities the virus has to mutate, and make it less likely that new variants may emerge.

“This is a collaborative effort,” Kuppalli said. “So we need everybody to play their role.”

Editor’s note: Johnson & Johnson is a funder of the PBS NewsHour.

Left: A researcher uses laboratory equipment as researchers at Aalborg University screen and analyze all the positive Danish COVID-19 samples for the variant known as B.1.1.7 in Aalborg, Denmark, Jan. 15, 2021. Ritzau Scanpix/Henning Bagger via Reuters