For countries with few vaccine doses, fighting COVID-19 is ‘a race from behind’

Rosalia Indongo wanted to get a COVID-19 vaccine. Then, her country, Namibia, ran out of doses. And then she got sick. While the United States and a handful of other countries are already offering COVID-19 booster shots, health care workers in dozens of low-income countries haven’t yet had a first dose.

A nurse by training, Indongo, 56, oversees a health care nonprofit in Windhoek, Namibia, that works on health care policy to improve outcomes for HIV patients. Since the pandemic’s arrival, her team has shifted their focus to the the coronavirus and what can be done to slow its spread.

Due to heart health complications in May, Indongo said she missed a chance to get vaccinated with either AstraZeneca or Sinopharm, which was developed in China.

Namibia then stopped distributing vaccines — they had used up their stock. A few weeks later, the sub-Saharan nation experienced a surge of cases, and an outbreak occurred at Indongo’s office. She became so sick in early July that she was hospitalized for 17 days, 10 of which she needed to receive oxygen treatment. Today, Indongo remains unvaccinated and hopes that medical issues linked to her COVID-19 infection do not prevent her from getting her first shot later this month.

While Namibia has amassed one of the highest reported COVID-19 death tolls in Africa — and experts say that’s likely an undercount — an estimated 92 percent of its population is still unvaccinated. The dangerous trend is fueled in part by vaccine hesitancy, but also due to a lack of supply.

“Everything is being grabbed up by the wealthier countries,” Indongo said.

The coronavirus pandemic has laid bare wide disparities in health care between countries on issues like vaccines and raised calls for more resource-sharing to save lives. Almost two dozen vaccines exist worldwide, but high-income countries — home to less than half of the planet’s population — hold 80 percent of all doses, according to the World Health Organization. One estimate suggests that a quarter of people worldwide are fully vaccinated, but fewer than 2 percent of people living in low-income countries have received a single dose.

That disparity “is fueling the pandemic,” said Dr. Kate O’Brien, the WHO’s director of immunization, vaccines and biologicals. 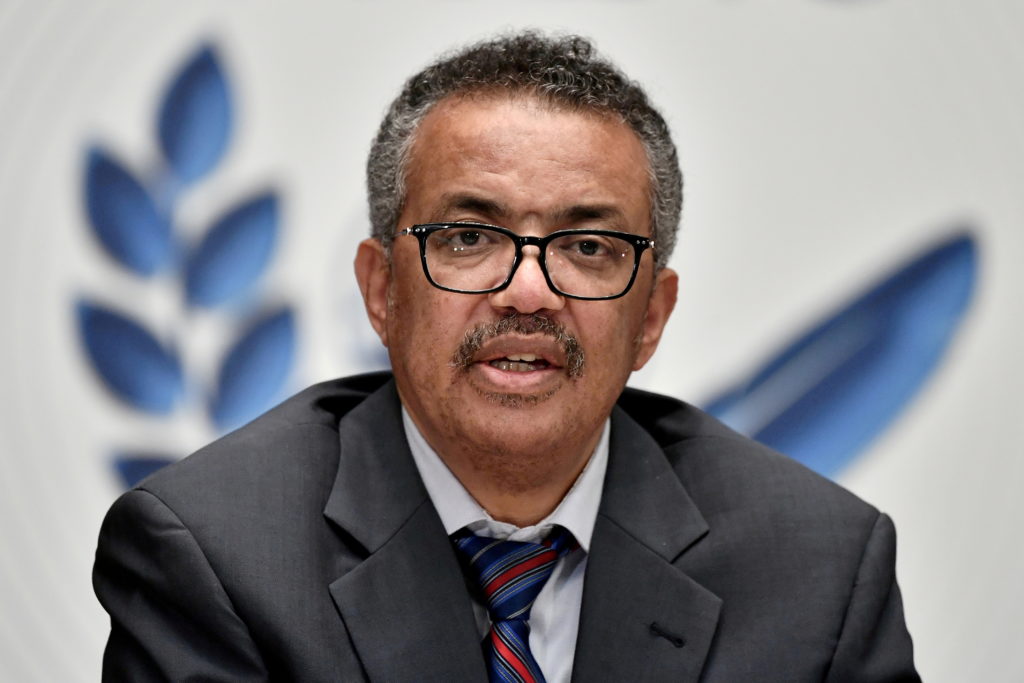 Last month, the WHO called for a global moratorium on COVID-19 vaccine boosters until at least the end of September. That would give each country enough time to vaccinate at least 10 percent of their population, according to the WHO.

“It’s unconscionable that some #COVID19 vaccine-producing companies are reporting record profits, and some countries are offering boosters, while so many people remain unprotected,” WHO Director-General Dr. Tedros Adhanom Ghebreyesus tweeted on Aug. 17. “No one is safe until everyone is safe.”

President Joe Biden has pushed back against this criticism, saying the U.S. pledged to donate 600 million vaccine doses to COVAX, an initiative designed to improve global vaccine access that is overseen by the WHO, Coalition for Epidemic Preparedness Innovations and others. He also said the U.S. has given “more vaccine to other countries than every other country in the world combined.”

“We can take care of America and help the world at the same time,” Biden said during a speech in mid-August.

But those doses are not getting to the people and countries who need them fast enough, said Dr. Tom Frieden, former director for the Centers for Disease Control and Prevention, who leads the global health initiative called Resolve to Save Lives. Since mid-April, Namibia has received roughly a fifth of its allocated 108,000 doses of AstraZeneca vaccines from COVAX, according to GAVI, the Vaccine Alliance.

While more than 5 out of every 10 people in the U.S. are fully vaccinated against coronavirus, in India, which produces most of the world’s vaccine stockpile, the number is one out of 10. And across the African continent, fewer than 3 percent of the population has been vaccinated, Dr. John Nkengasong, a virologist who directs the Africa Centres for Disease Control and Prevention, told PBS NewsHour correspondent William Brangham on Tuesday, adding that he has “not seen the science yet that justify” boosters. The lack of global vaccine equity is problematic both ethically and epidemiologically, Frieden said.

“The longer there is uncontrolled spread anywhere in the world, the higher the risk that there will be even worse variants emerging,” Frieden said. 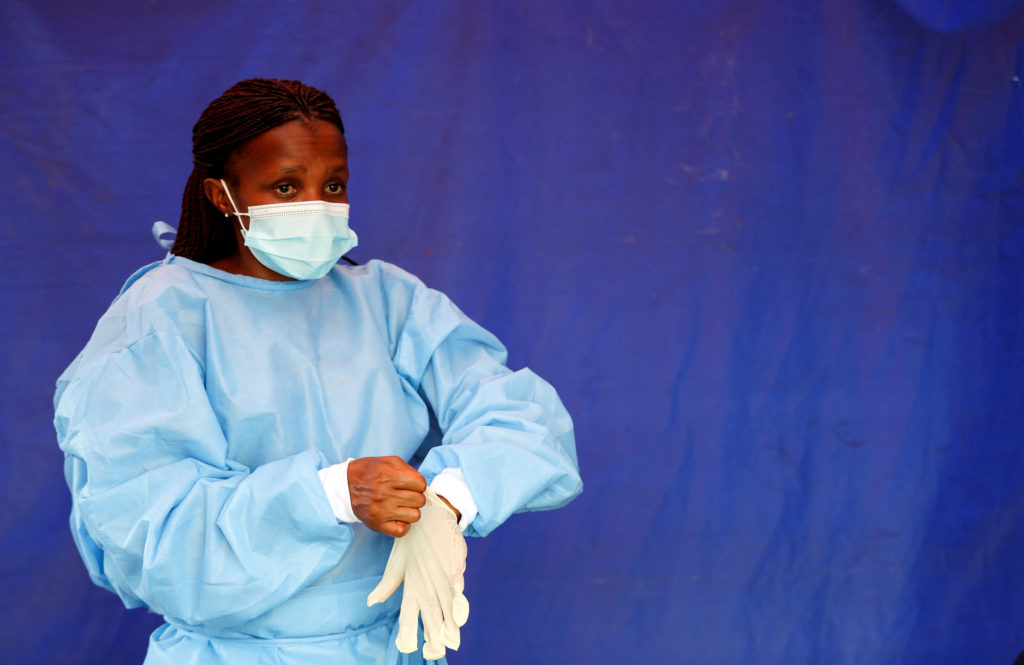 FILE PHOTO: A health worker wears protective clothing as she prepares for testing travelers for the coronavirus disease amid a nationwide COVID-19 lockdown in South Africa. Photo by Siphiwe Sibeko/Reuters

Each time someone gets sick with the coronavirus and infects another person, that gives the virus a chance to mutate. It’s a biological gamble that could make the virus weaker or stronger. Unchecked infections allowed the delta variant to emerge, which is far more transmissible than the original strain.

When vaccines are used with other health measures, those transmission chains stop, especially when most people within a community have gotten their shots.
“The vaccines have their best chance at having maximum impact on protecting against disease and death when they can be rolled out to achieve a population level of immunity without pressure from the virus on the vaccine,” O’Brien said.

Until more communities have broader access to vaccines, O’Brien said it is “too soon to take our foot off the pedal” by relaxing COVID-19 restrictions even in nations with higher vaccination rates. 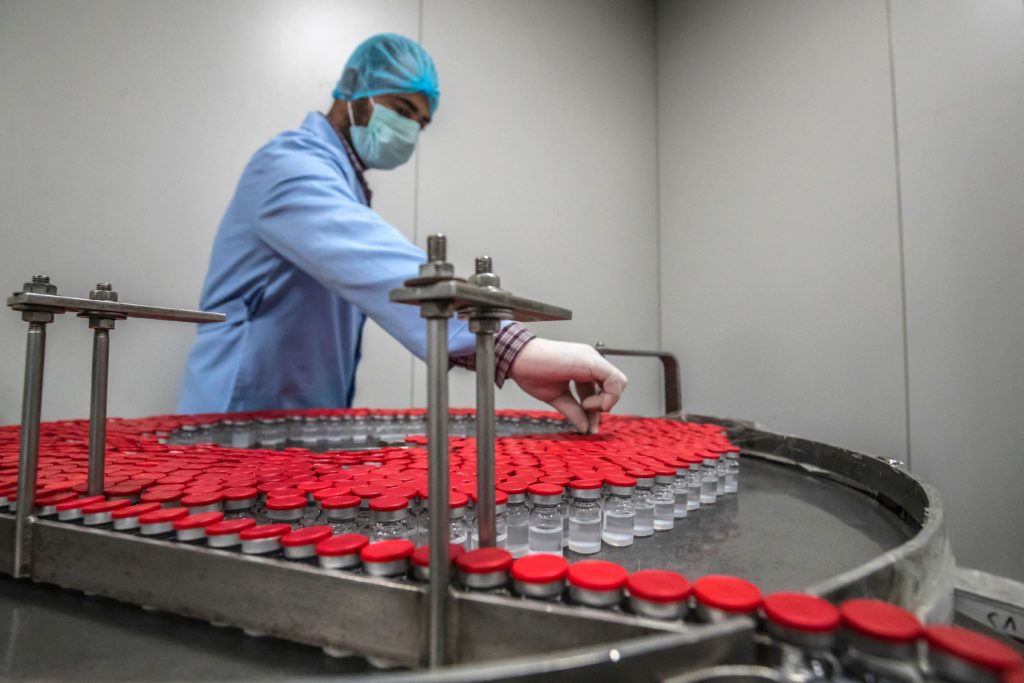 Laboratory workers supervise the production of vials of China’s Sinovac vaccine against the coronavirus, produced by the Egyptian company VACSERA. Photo by Khaled Desouki/AFP via Getty Images

Aside from donating vaccine doses, O’Brien said countries that have enjoyed an abundance of vaccines should also free up supply chains and share technology with other parts of the world to improve capacity to manufacture and distribute doses around the globe. Countries also need to evaluate export restrictions on supplies, key vaccine ingredients and the finished product.

An announcement in late July from the WHO seemed like a step in that direction — a technology transfer hub is planned for Capetown, South Africa, in order to undo the “global imbalance of manufacturing capacity” of COVID-19 vaccines and technologies. South Africa endured months of a sluggish vaccine rollout, and some estimates suggest the nation has since reported one of the highest vaccination rates across the continent. But those facilities will take time to build up and won’t stave off suffering and death happening right now, O’Brien said.

To get vaccines where they need to be, experts on the ground are working through Africa CDC to train local health care workers and ramp up supplies, said Chris Skopec, executive vice president for Project HOPE, a global health organization that collaborates with and assists health ministries in other countries.

“It’s a race, and we’re racing from behind,” Skopec said.

Indongo, who has a lingering cough and respiratory problems, said she survived her COVID infection because she knew the warning signs of the virus and where to find help. She noted that most people don’t have those resources, and often rely on home remedies to nurse themselves back to health — methods that may not work for this novel virus.

Improving vaccine access will be crucial to saving more Namibians, and she becomes deeply frustrated when leaders in wealthier countries talk about giving booster shots to people who have already been fully vaccinated.

“They should think first about those that do not have before this talk about the booster or whatever.”

“They should think first about those that do not have before this talk about the booster or whatever,” she said.

Indongo already fears the next coronavirus variant, especially if vaccines remain largely out of reach for most of the world’s population. In addition to fueling more suffering, she said it also will succeed in further deepening disparities that already have cost so many people their lives.

“If another wave comes, the first thing that will happen to the world is close the borders, go into lockdown,” she said. “What does that do to those ones who do not have? They are still disadvantaged.”

Left: A quarter of people worldwide are fully vaccinated, but fewer than 2 percent of people living in low-income countries have received a single dose. Photo by PHILL MAGAKOE/AFP via Getty Images