It feels like we’ve been here before. New COVID-19 infections have hit another peak, health care systems are overwhelmed by severe cases, one more school year is starting without having the pandemic under control.

But unlike previous surges, the nation has access to three effective vaccines and hundreds of millions of people have gotten their doses. Though millions remain unvaccinated, a new PBS NewsHour/NPR/Marist poll suggests that some people who had been resistant to getting a jab have softened their stance.

Slowly rising vaccinations haven’t inoculated President Joe Biden from a slump in approval numbers. While Americans have largely supported Biden on his pandemic leadership, that support declined as the highly contagious delta variant drove a dramatic rise in cases.

“We shouldn’t be surprised by being here.”

“We shouldn’t be surprised by being here,” said Dr. Michael Osterholm, an epidemiologist who directs the Center for Infectious Disease Research and Policy at the University of Minnesota. “The virus is going to do what the virus is going to do. The question for us is how are we going to respond to it.”

While taming the coronavirus will continue to depend on widespread adoption of key public health measures, the United States is still confronting the gulf between those who believe that something like getting a vaccine is a personal decision — 43 percent of Americans — versus about half who believe it’s for the common good.

Here’s a closer look at some of that poll’s key takeaways. 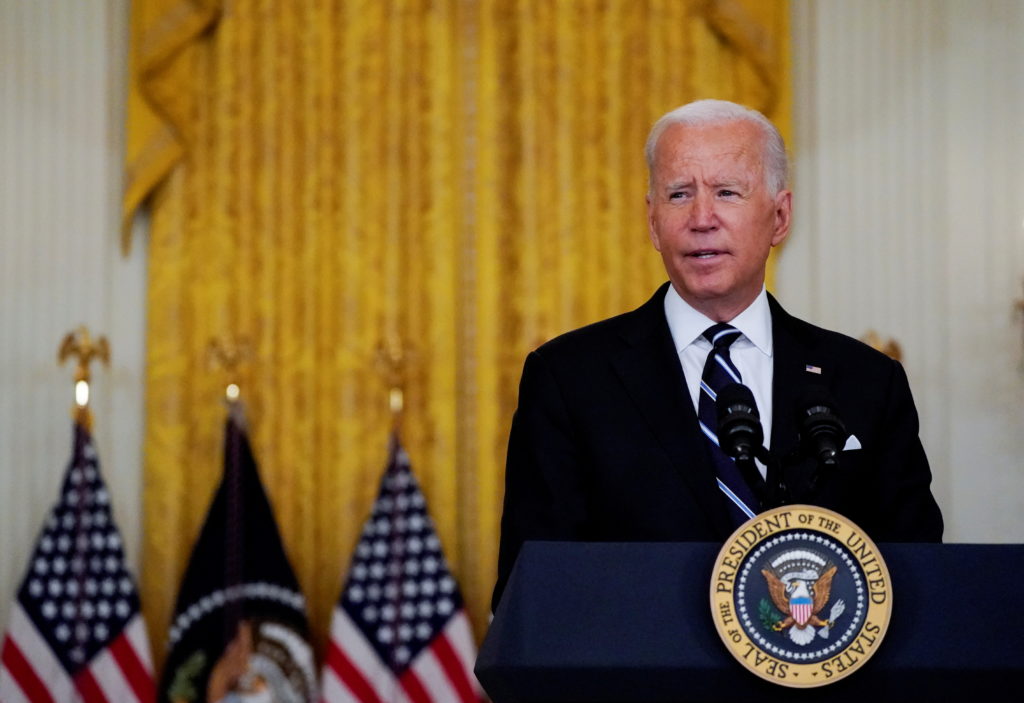 U.S. President Joe Biden delivers remarks on the coronavirus disease response and vaccination program during a speech in the East Room at the White House in Washington, D.C. Photo by Elizabeth Frantz/REUTERS

1. Public approval for Biden’s handling of the pandemic has dipped.

A majority of Americans — 55 percent — approve of what Biden is doing to relieve the pandemic. That support comes from nearly all Democrats, about half of independents and one out of six Republicans. And yet that number is at the lowest level since he took office almost nine months ago.

At a moving average of 154,000 confirmed cases per day nationwide, new COVID-19 infections are at their highest rate since Biden’s first days in office and before vaccines were widely available. Younger people who are unvaccinated are driving the increase, and people in their 30s and 40s, as well as children, are getting severely ill and dying from COVID-19 more often than at other times since the virus emerged.

While the president’s pandemic approval has suffered, he has not plummeted to the low levels seen by his predecessor. Former President Donald Trump’s best pandemic approval rating of 44 percent came shortly after the coronavirus was detected in the U.S. It eventually sank into the high 30s, where it remained for the rest of his presidency.

Since our poll in late June, the Biden administration has tried to clamp down on misinformation, improved the data on infections in vaccinated people, fully approved the Pfizer mRNA vaccine, as well as recommended booster shots. But the Centers for Disease Control and Prevention has also been criticized for perhaps being too quick to change guidance on masks, and then backtracking when the latest science suggested those who are vaccinated can still transmit the virus.

Meanwhile, millions of families are holding their breath as they send their unvaccinated children back into the classroom. The Food and Drug Administration this summer asked two of the vaccine makers to test their products on more children to rule out a rare side effect, delaying the expected authorization by an unknown amount of time. Regardless of whether their dissatisfaction is related to vaccines, 52 percent of parents said in this poll that they disapprove of how Biden has handled the pandemic so far.

And while many applauded the Biden administration’s decision to mandate vaccines for federal employees, giving cover to businesses and other organizations to do the same, there has been a political backlash from Republican governors who have actively banned various mandates in their states. 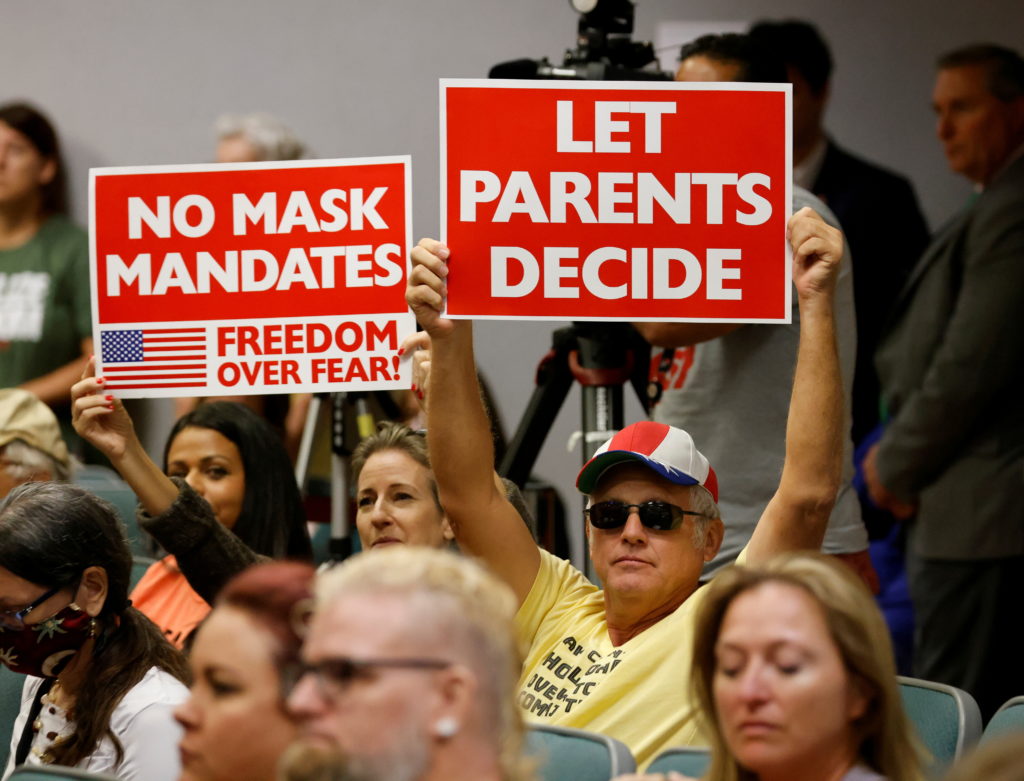 FILE PHOTO: Residents protest mask mandates to prevent the spread of the coronavirus disease in Florida. Photo by Joe Skipper/REUTERS

Nationally, those governors are in the minority. Facing the delta surge, about half of Americans support more robust pandemic policies, including employer mandates for COVID-19 vaccines — up to 50 percent from 44 percent in June. 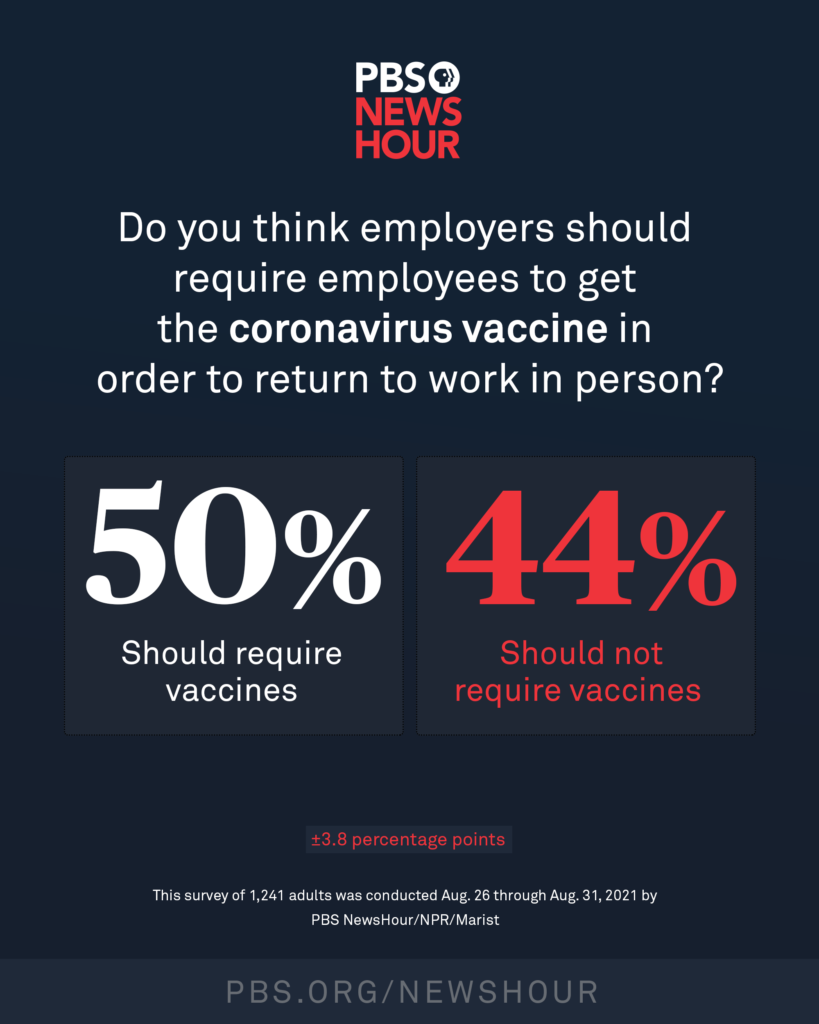 Since December, more than 205 million people in the U.S. have gotten at least their first vaccine dose — or about three-quarters of everyone aged 12 or older who are eligible to be inoculated against the coronavirus. Yet experts say vaccination rates are still too low in the U.S. to contain the spread.

Division over whether employers should mandate coronavirus vaccines seems to be driven by politics, with 82 percent of Democrats supporting that idea, 76 percent of Republicans opposing it and independents almost evenly split. 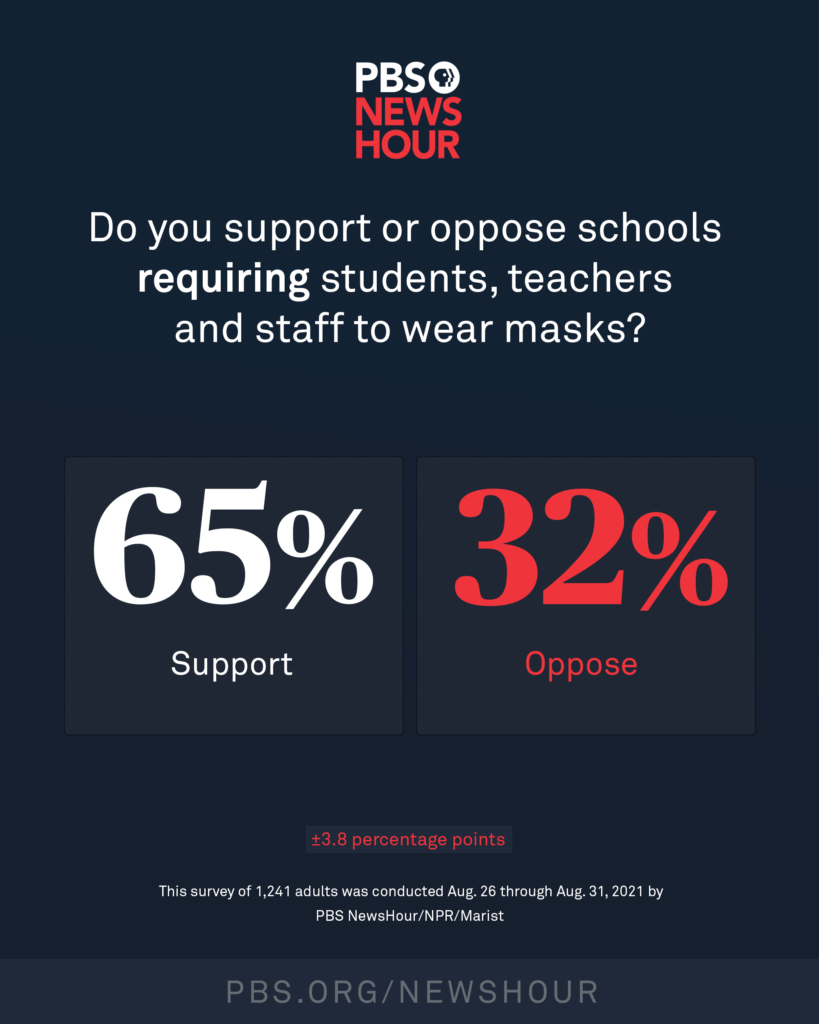 Meanwhile, two-thirds of Americans say that students, teachers and staff who are heading back to in-person learning should mask up inside schools, including 52 percent of parents with school-age children. Another 44 percent of parents, and a third of the U.S. adults overall, think no such requirements are needed. Among Black Americans, who have suffered disproportionately during the pandemic with severe illness and death, 87 percent said they support masks in schools — far more than 53 percent of white Americans who say the same. And 55 percent of rural Americans oppose masks in schools, compared to 36 percent of those who reside in cities.

Americans remain divided over the principle of getting vaccinated. About half say it is necessary and everyone is responsible for protecting the health of others during a global pandemic, while another 43 percent say it is a personal choice. 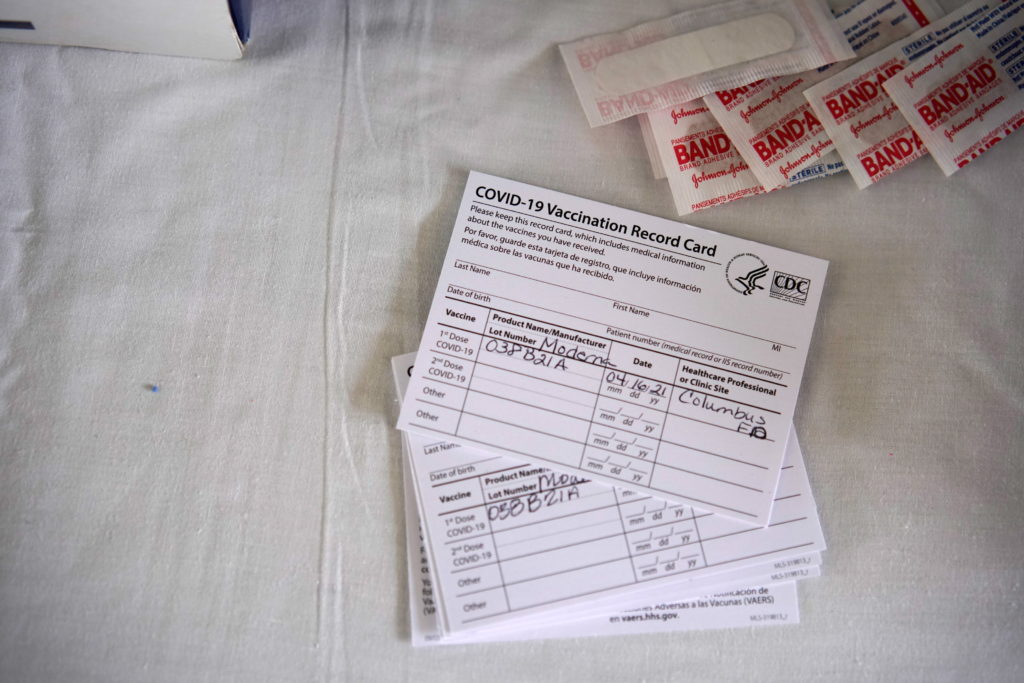 FILE PHOTO: As the delta variant fuels more infections and worsens the pandemic, fewer Americans say they are unwilling to get vaccinated. Photo by Paul Ratje/REUTERS

3. Personal opposition to getting a vaccine has softened amid the delta surge.

Fewer Americans are unwilling to get vaccinated compared to late June. Today, 19 percent say they won’t get a COVID-19 shot, down from 28 percent earlier this summer.

CDC director Dr. Rochelle Walensky said on Thursday that they “are seeing an uptick in vaccinations generally.”

Whether that dramatic change in the poll numbers reflects fear over the delta variant or important policy shifts, such as FDA’s full approval of Pfizer’s vaccine, pandemic politics are still at play. More than a third of Republicans — 37 percent — say they won’t roll up their sleeves, compared to 5 percent of Democrats and 17 percent of independents. But even the number of Republicans who say they will not get vaccines has shrunk since late June, when 44 percent of Republicans said they did not want to get vaccinated.

When high-ranking politicians, including former President Donald Trump, made false claims about the virus early on in the pandemic and cast doubt about scientists and public health experts, it further stoked a “stressful political climate,” said Dr. Saskia Popescu, an epidemiologist and biostatistician at the University of Arizona. Many in the U.S. are still swayed by misinformation, but the latest numbers suggest that over time, trust in science is growing.

Even then, it’s important to remember that “vaccines are one of the best strategies we have, but it’s not a risk eliminator,” Popescu said. “It’s a risk reducer.” 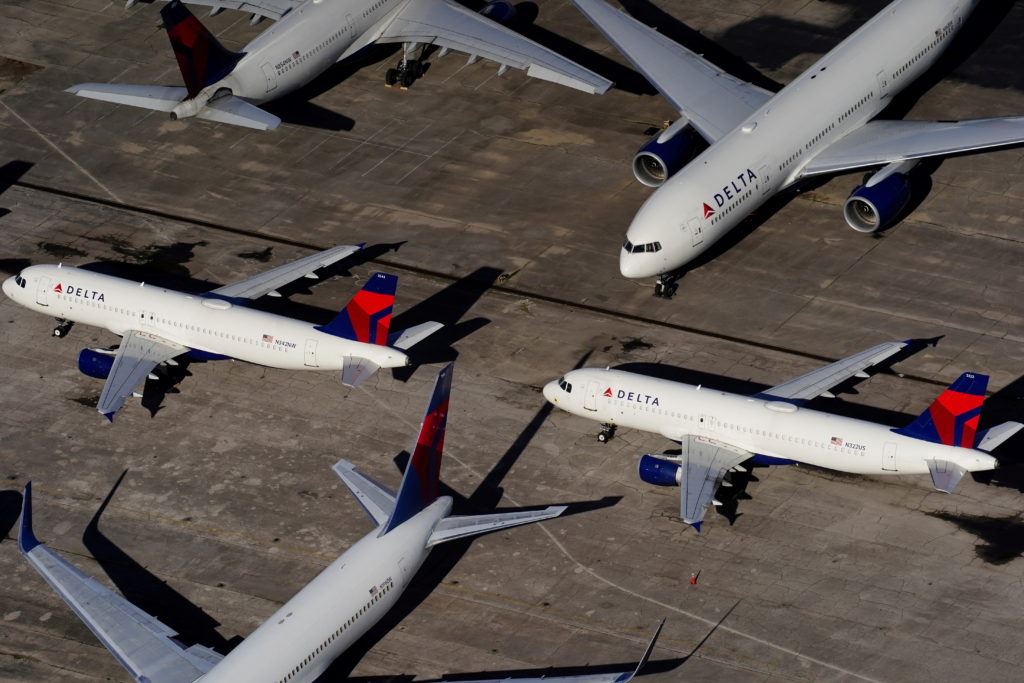 FILE PHOTO: Airplanes sit parked on a tarmac during the early days of the pandemic. More than a year and a half with the coronavirus, Americans are split in their willingness to board a plane, train or other shared transportation, according to the latest PBS NewsHour/NPR/Marist poll. Photo by Elijah Nouvelage/REUTERS

4. Americans are eager to resume normal life — but not so fast.

More than a year and a half into the coronavirus pandemic, Americans are COVID-19 weary and wishing life could go back to normal. But not everyone is ready to live like it’s 2019. And since the delta variant gained steam in July, some seem to have taken a step back.

Most people say they are willing to eat at restaurants, but the public is evenly divided on whether they would board an airplane, train or other shared transportation.

Two-thirds of Americans say they’re ready to visit loved ones or are already doing so, even if friends or family are unvaccinated — a drop from 75 percent in June, before widespread reports of breakthrough infections had a chilling effect among fully vaccinated Americans and reminded people that the pandemic was not yet over. 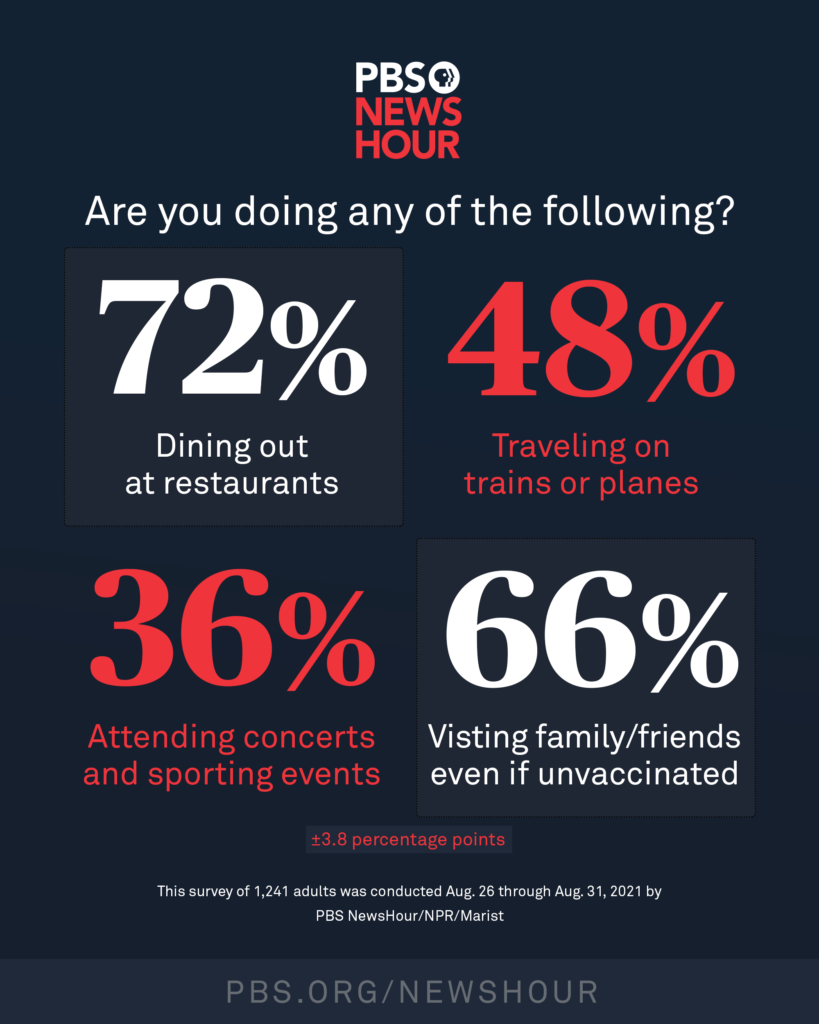 Back then, there was a noticeable jump — 10 points — in the number of people who expected that things would be back to normal in August, compared to when people were polled in April and the rate of people getting new vaccines hit its peak. And yet about half of Americans were already braced for looming disaster from another wave of infections, according to a PBS NewsHour/NPR/Marist poll from that time.

Popescu said it is still important to pay attention to new research and data about this novel virus. Transparency about data is essential, but so is explaining why it’s important, she said. Experts must do a better job of reaching and speaking to the public when new science yields an important discovery. When fully vaccinated people were told in May they could shed their masks, only to put them back on when the delta variant changed the calculus of the pandemic, that was a moment when many people experienced public health whiplash.

“When the guidance changes, yes, that can be frustrating, but that’s a sign of us getting a better understanding of what’s going on,” Popescu said.

Left: FILE PHOTO: People wait in line for a COVID-19 test at a back-to-school clinic in Los Angeles. Photo by Lucy Nicholson/Reuters