Allysa Seely, a world champion and Paralympic gold medalist in the paratriathlon, woke up one morning in January 2020 with an infection in her leg.

When it didn’t go away for a few weeks, she underwent surgery. After the infection came back, another surgery was required. Several months afterward, she was hospitalized again, throwing her training drastically off course.

“I begged [my doctor] to have my stitches out early so that I could race in [qualifiers]. I hadn’t worn a leg in two and a half months,” said Seely, whose left leg is amputated below the knee. “No running, no biking, very little swimming because I could not get in the pool with stitches, so pretty much limited to strength training on one leg and rowing with one leg.”

Seely qualified for the games, despite only being cleared to train in March, but then confronted a new challenge — a diagnosis of endocarditis, an infection of the heart that caused blood clots, in addition to other existing conditions. She, like other Para athletes who have struggled to make decisions and plan training around an event delayed and continually threatened by the coronavirus, have had to balance their concerns over contracting the deadly disease while still fulfilling their athletic goals. It’s a priority for many athletes with disabilities, especially those who are more at-risk or immunocompromised. 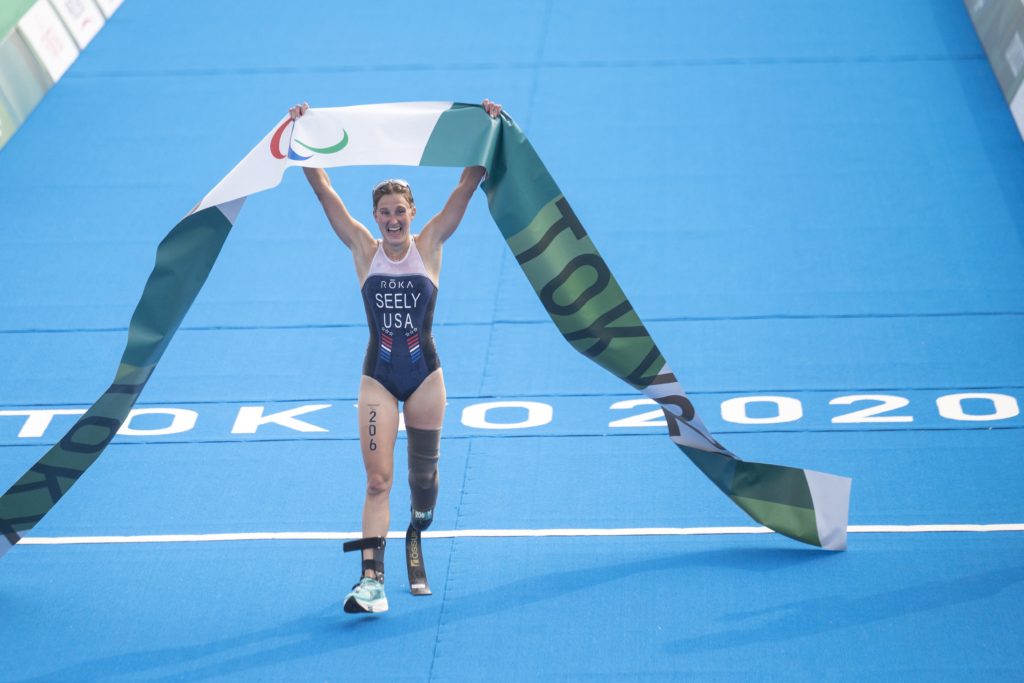 As Paralympians prepared for the Tokyo Games, which began on Aug. 24, questions lingered around the Olympic and Paralympic officials’ COVID rules and protocols. New Zealand’s Paralympics team skipped the opening ceremony — the only one out of the participating 162 delegations — citing safety fears amid new infections in Japan’s capital. Team USA, along with several others, took a limited team of staff members. For some athletes, the pandemic added more obstacles to their Paralympic journey than anyone could’ve seen coming.

In order to compete at the highest level, athletes with impairments need resources — from training facilities and the equipment you need to physically compete in their sport to routine medical care for all kinds of conditions, Dr. Amy Houtrow, a professor of PM&R and Pediatrics at the University of Pittsburgh told the PBS NewsHour. Questions about whether athletic and medical organizations can meet those needs have surrounded this year’s event and echo the longstanding barriers people with disabilities have faced in getting support in their daily lives, both before and during the pandemic.

In the end, Seely decided to attend the 2020 Paralympic Games, feeling reassured by the “really hard line on what is and isn’t acceptable” set at the Olympics earlier this summer, including the rules put in place on frequent testing. The second week of the games, Seely won her second gold medal in the PTS2 class of the women’s triathlon.

What some Paralympians have said about support at the games

Like the Olympics, this year’s Paralympic Games, which kicked off last week in Tokyo, are markedly different from ones in the past. For the first time, the Paralympics — with a record more than 4,400 athletes — has received a prime-time slot on American network television. And, similar to COVID-19 protocols for the Olympics weeks ago, there are no fans in the stands, and many teams have had to reduce their rosters of staff.

David Brown, who won the Paralympic gold medal for the T11-class of the men’s 100-meter dash in 2016, experienced troubles with training amid pandemic restrictions, including his guide sustaining an injury. James Avery, his guide for the event, had been injured since the beginning of the Para athletics season, and it soon became clear he would not recover in time for the games. Simultaneously, restrictions limited his ability to train with others, which, as a blind runner, is an essential part of Brown’s year-round training.

Brown arrived in Tokyo more than a week before the opening ceremony. He was questioning his and his teammate’s safety even as the Paralympians were held in a bubble on a U.S. Air Force base, isolating to prevent possible infections.

“How close is everyone? Is that going to be mandated? How are they going to know?” he said. 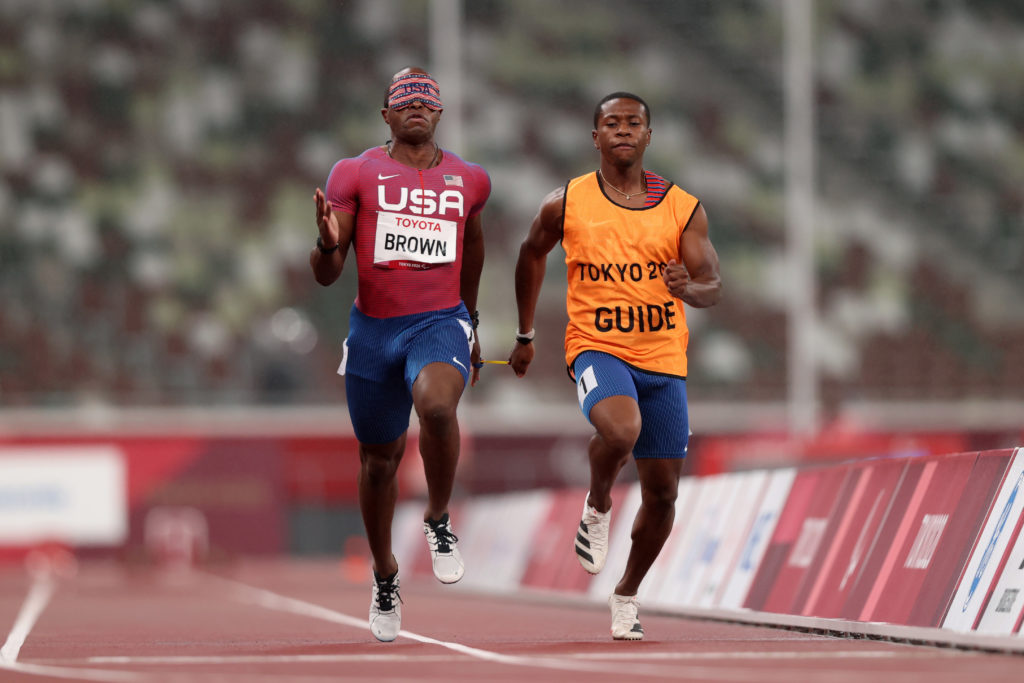 David Brown of Team USA (L) and guide Moray Steward compete in the T11-class of the men’s 100-meter dash at the Tokyo 2020 Paralympics. Photo by Naomi Baker/Getty Images

Though not all of his safety questions could be answered, Brown said he appreciated that the precautions Team USA laid out for the Paralympic Track & Field team were transparent.

Despite having to adjust to training with new guides, Brown said he was able to reach new heights as a sprinter while training during the pandemic.

“Long story short, I found who I was as far as a sprinter,” Brown said. “I was able to find myself as an individual and as an athlete, and I was able to improve on my form and my technique of sprinting, too.”

Both Brown and Seely personally felt their respective teams had been transparent and helpful with COVID-19 precautions. However, Becca Meyers, a deaf-blind Paralympic swimmer, left Team USA in July, after her request to have her mother come with her to Tokyo as a full-time guide was denied due to the organization’s pandemic restrictions.

The U.S. Olympics and Paralympic Committee released a statement saying, “The decisions we’ve made on behalf of the team have not been easy, and we are heartbroken for athletes who are unable to have their previous support resources available.” And several Congress members issued a statement, requesting that the committee change its ruling for Meyers. But, the swimmer still did not get the resources she needed, and didn’t travel to Tokyo.

“To compete successfully at that level is really a phenomenal thing that these athletes can do that. But they also need the support systems in place to help them be able to actually be able to do that, and do it to the best of their ability,” Houtrow said.

During the months leading up to her diagnosis, Seely said she underwent several blood tests and started antibiotics. She said she was discharged the first time she was hospitalized because doctors told her the tests were “contaminated” and therefore inaccurate.

Medical practices often consider disabilities to be a “problem to be fixed,” which affects how health care providers approach treatment for people with impairments, said Houtrow, who was born with a rare skeletal dysplasia.

In medicine, disability “represents something like a failure, which clearly it’s not,” she said.

There’s another way of looking at disability, Houtrow said, that understands it as something not located in the body of a person with the impairment, “but located in the way society addresses differences and disability.” she said. “If we made accommodations and made the world accessible [we wouldn’t] devalue the lives of people with disabilities,” she said.

In medicine, disability “represents something like a failure, which clearly it’s not.”

The National Council on Disability released a 2019 report that found that “negative biases and inaccurate assumptions about the quality of life of a person with a disability are pervasive in U.S. society and can result in the devaluation and disparate treatment of people with disabilities.”

The past 18 months saw an increased need for the healthcare workers to “use crisis standards of care,” or decisions made in response to a shortage of resources, which could put a patient at risk of a poor outcome. As hospitals were overwhelmed with COVID patients, these CSC measures were implemented, and clinicians made decisions to withhold treatment or care based on the patient’s age and assumed COVID-19 mortality risk. The National Academy of Medicine released a study in August that found that discrimination against people with disabilities — in the form of withholding care — existed in “several clinical situations and state CSC plans.”

“It’s very clear that people are just saying, ‘Oh, they’re disabled, so they’re less worth saving,’ which, of course, every life — regardless of your disability or not — is valuable on equal footing,” Houtrow said.

Part of what causes this discrepancy between health care treatment and the needs of people with disabilities is the notion of “quality of life” — a subjective measurement of how much a person can enjoy their day-to-day life. Doctors may incorrectly assume that an impairment means a patient “can’t experience love and joy and fulfillment,” Houtrow said.

“Quality of life is something that I determine for myself. I assess it for me, you assess it for you, and when someone isn’t able to assess it for themselves, then a proxy person does that,” she added. “I, as a doctor, cannot make an assumption about a child’s or a patient’s quality of life.”

However, doctors do make these assumptions, and the pandemic demonstrated just how severe the consequences can be. “We have been just very obviously undervaluing the lives of people with disabilities,” Houtrow said. “And we are recognizing that we cannot use one-size-fits-all strategies to reach people.” 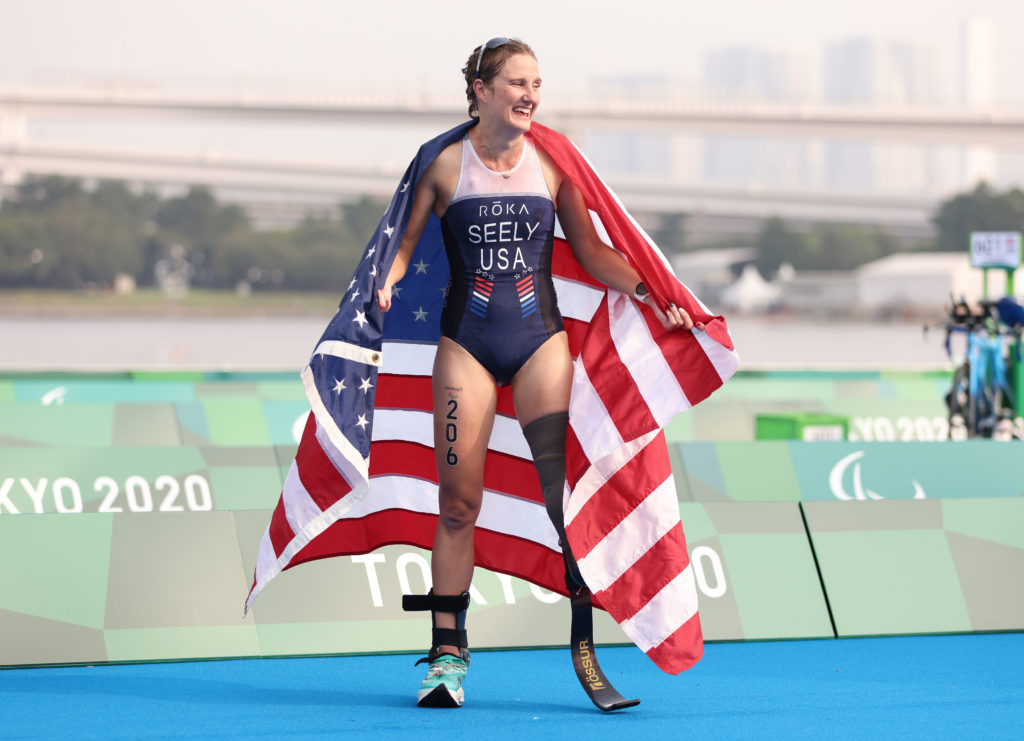 For Seely, spending months in and out of the hospital and seeing medical staff not taking her own experiences and knowledge into account — because she’s a woman, because she has visible and invisible disabilities, she said — drove her to speak out.

“I really just can’t stand by silently anymore,” Seely said. “I cannot listen to another doctor tell me that there is nothing wrong with me or I’m not as sick as I am because if I was, I wouldn’t be an athlete, or I’m too sick to be an athlete.”

Since the start of the pandemic, there have been debates about risk of infection for the general population, and pushback against mask mandates, social distancing rules and other restrictions. Those in the disabled community say there was never really a choice: The disease could be hugely harmful, or even deadly, and they needed to take the utmost caution to avoid contracting it.

“It was just really eye opening to how the greater population saw the at-risk community as a burden and as people that were really holding up their lives,” Seely said.

Thousands of Paralympians are competing with various impairments — some visible, some not — that may make them more vulnerable to COVID. And performing at the games doesn’t make one immune to doubts or fears. As the pandemic continued on, at times, Seely said it felt like it was “overwhelming.”

“There were definitely times that it felt like I was less important than the rest of the world,” she said.

But keeping a strong support system made her realize “how lucky I was for that group of people to step up and show me that I’m not lesser, I’m not worthless because of my disability or my illness.”

Left: The opening ceremony of the Tokyo 2020 Paralympic Games at the Olympic Stadium on Aug. 24. Photo by Mauro Ujetto/NurPhoto via Getty Images

How violinist Gaelynn Lea is redefining who can be a musician