NEW YORK — New York Gov. Andrew Cuomo said Saturday that China is facilitating the shipment of 1,000 ventilators to his state, as he continues to shop for more of the lifesaving devices ahead of a growing number of coronavirus patients who will need them.

The number of people infected in the U.S. has exceeded a quarter-million, with the death toll climbing past 7,000; more than 3,500 of those deaths are in New York state. Cuomo said the ventilators from China were expected to arrive Saturday.

“This is a big deal and it’s going to make a significant difference for us,” Cuomo said, adding that the state of Oregon is also sending 140 ventilators to New York. Cuomo is also looking for ventilators closer to home, and has issued an order that forces even private hospitals in the state to redistribute ventilators to the hospitals most in need.

“I want this all to be over,” Cuomo said. “It’s only gone on for 30 days since our first case. It feels like an entire lifetime.”

As the number of people infected has grown to more than 1.1 million worldwide, health care systems are straining under the surge of patients. In China, air raid sirens sounded across the country and flags flew at half staff in tribute Saturday to victims of the coronavirus pandemic, including the health care “martyrs” who have died fighting to save others.

With the highest number of infections in Europe and their hospitals overwhelmed, Spain and Italy struggled to protect medical staff on the front lines of the outbreak, while 17 medics in Egypt’s main cancer hospital tested positive for the virus. 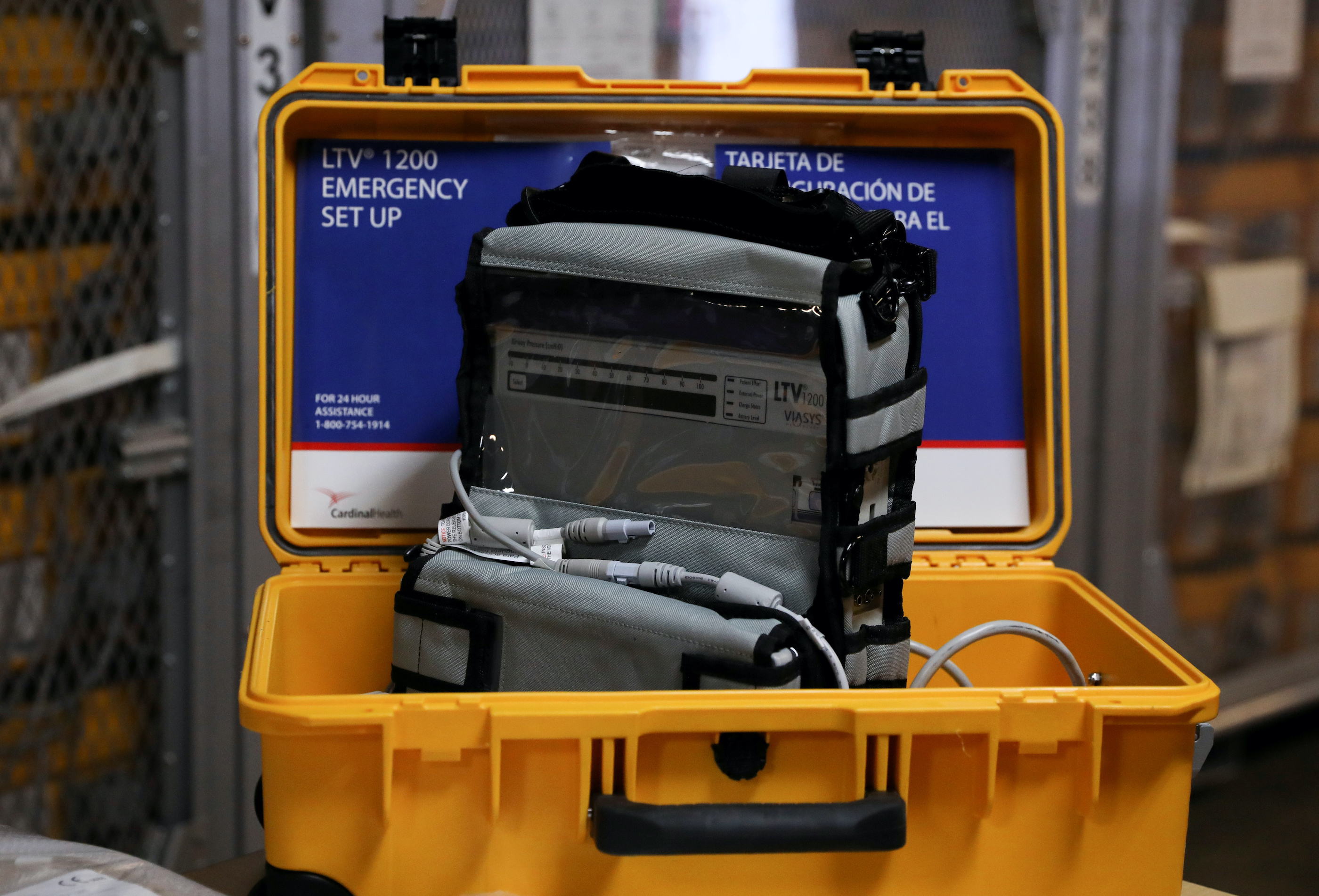 A ventilator is seen at the New York City Emergency Management Warehouse, where 400 ventilators arrived and before being shipped out for distribution, due to concerns over the rapid spread of coronavirus disease (COVID-19) in the Brooklyn borough of New York City, U.S., March 24, 2020. Photo by Caitlin Ochs/Reuters.

Italy and Spain, with combined deaths of more than 25,000 and nearly a quarter-million infections, have reported a high percentage of infections among health care workers.

Carlo Palermo, head of Italy’s hospital doctors’ union, fought tears as he told reporters in Rome of the physical risks and psychological trauma the outbreak is causing, noting reports that two nurses had committed suicide.

“It’s a indescribable condition of stress. Unbearable,” he said. “I can understand those who look death in the eye every day, who are on the front lines, who work with someone who maybe is infected, then a few days later you see him in the ICU or die.”

U.S. President Donald Trump announced late Friday he would prevent the export of N95 protective masks and surgical gloves to ensure they are available in the U.S. — prompting neighboring Canada’s prime minister to respond that cross-border aid goes well beyond supplies.

“I think of the thousands of nurses who cross the bridge in Windsor to work in the Detroit medical system every day,” Justin Trudeau said. “These are things Americans rely on.”

The number of people infected in the U.S. has now exceeded a quarter-million, with the death toll climbing past 7,000. New York state alone accounts for more than 2,900 dead, an increase of over 560 in just one day. Most of the dead are in New York City, where hospitals are swamped with patients.

More than half of Africa’s 54 countries have closed air, land and sea borders to prevent the virus’ spread but that has delayed aid shipments. Virus cases in Africa are now over 7,700, and the head of the Africa Centers for Disease Control and Prevention has warned some nations will have more than 10,000 cases by the end of April.

The transport followed last month’s deployment of a similar Russian coronavirus task force to Italy and the delivery of medical supplies to the United States.

Russia has reported a relatively few 4,700 cases and 43 deaths, and its southern neighbor Georgia said Saturday it has registered its first death from the virus, among 156 confirmed cases of infection.

In China, where the coronavirus was first detected in December, authorities have cautiously lifted restrictions amid dropping numbers of infections. On Saturday it reported just one new confirmed case in the epicenter of Wuhan and 18 others among people arriving from abroad. There were four new deaths for an official total of 3,326.

In the nationwide tribute to the victims, the government singled out the more than 3,000 health care workers who contracted COVID-19 and the 14 reported to have died from the disease. Among them was doctor Li Wenliang, who was threatened with punishment by police after publicizing news of the outbreak but has since been listed among the national “martyrs.”

As the outbreak spreads in Egypt, the Arab world’s most populous country, the news that 17 health care worker tested positive for the virus at the National Cancer Institute raised fears of what the virus might do to the country’s hospital system.

Maggie Mousa, an anesthesiologist at the institute, tweeted that one of her close friends was infected. She accused top officials of negligence for not imposing restrictions after the first case was detected more than a week ago.

“They refused to take any measures to protect her and isolate the institute,” she said.

Spain’s Health Ministry reported 18,324 infected health workers as of Saturday, representing 15% of the total number of infections in the country. To help boost its ranks of health workers, Spain’s government said that it had hired 356 foreign health workers living in Spain. It has also hired medical and nursing students to help.

As the country completes its third week in a state of emergency, there were signs the number of new infections were slowing, but they were still high with 7,026 new cases reported overnight Saturday and 809 deaths.

In Italy, more than 11,000 medical personnel have been infected — just under 10% of the official total — and some 73 doctors have died, according to the National Institutes of Health and the association of doctors.

Significantly, not all the doctors were working in hospitals. Many were general practitioners or dentists, who were believed to have been exposed via respiratory droplets.

Palermo, the doctors’ union head, said a key reason for the high rate among general practitioners was that flu was raging at the same time in the early part of the year.

“The epidemic was superimposed on top of the normal course of influenza, which didn’t allow us to discriminate between the two,” he said. “A patient with a fever or cough or unspecific symptoms would go to his doctor … and that’s where the contagion happened.”

Worldwide, confirmed infections rose past 1.1 million and deaths exceeded 60,000, according to a tally by Johns Hopkins University. Experts say both greatly under-count the true number of victims because of lack of testing, mild cases that were missed and governments that are underplaying the crisis.

At the same time, more than 233,000 people have recovered from the virus, which causes mild to moderate symptoms in most patients, who recover within a few weeks.

Forliti reported from St. Paul, Minnesota. Rising reported from Berlin. Associated Press writers around the world contributed to this report.

Left: Ventilators at the New York City Emergency Management Warehouse are shipped out for distribution due to concerns over the rapid spread of coronavirus disease (COVID-19) in the Brooklyn borough of New York City, U.S., March 24, 2020. Photo by Caitlin Ochs/Reuters.