How Guatemala finally ‘woke up’ to its malnutrition crisis

Elsewhere in the restaurant, the subject of malnutrition was on the table. “Guatemala is fourth place in the world in chronically malnourished children,” Alejandro Biguria, a young architect in this capital city, was saying. “It’s outrageous.”

He was anguished by the “horrific numbers,” as he calls them: Nearly 50 percent of Guatemala’s children are malnourished, which often leads to physical and mental stunting. That’s the nationwide figure; in some areas of the western highlands, where the Mayan population is largely concentrated, the malnutrition rate is upwards of 70 percent. That’s the worst in all of the Americas — or, as Biguria would put it, a first place for Guatemala. An outrageous first.

Until a few years ago, Guatemala’s high society in the bustling capital was ignorant of the country’s malnutrition problem. For them, flights to Miami and Houston for shopping trips were shorter, and more fashionable, than a drive to the western highlands.

Then a social movement, led by Biguria and some friends and colleagues in the private sector and civic society, began to stir the nation’s conscience. They launched the “I Have Something to Give Campaign,” hoping to get Guatemalans “involved in something bigger than themselves,” Biguria says. The aim was to take advantage of a burst of interest in Guatemala as people around the world studied the Mayan calendar for predictions of transformative events at the end of 2012. The campaign rallied thousands of Guatemalans to come together and form a human chain to the top of one of the nation’s volcanoes; another group formed a giant heart. 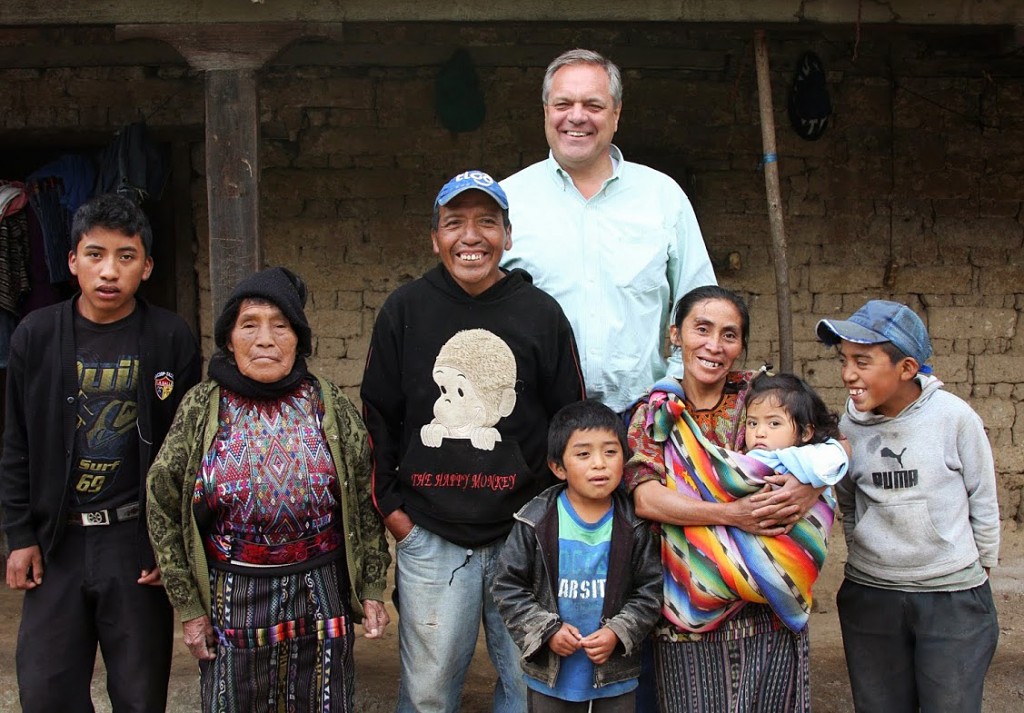 At 6 feet 3 inches, the author towers over the Chumil family of Sacbichol, in the western highlands of Guatemala. Childhood malnutrition can lead to physical stunting. Photo by Hari Sreenivasan

Another novel idea was for city residents to spend a weekend in the homes of poorer families, mainly in the rural areas of the highlands. Biguria says he was astonished when more than 6,000 people volunteered. This included members of the government as well as business leaders. The country’s new president had launched a Zero Hunger Pact, which helped elevate Guatemala to the top ranking in the global Hunger and Nutrition Commitment Index (HANCI), which is maintained by the Institute of Development Studies in Britain. The government’s Food Security and Nutrition department was anxious to build momentum behind the Pact, to create a “social movement,” as Luis Enrique Monterroso, its director, says.

The participants in the home visits received a close-up view of malnutrition and the struggles of fellow Guatemalans. This lead to a new campaign — Wake Up, Guatemala! — to bring malnutrition, and the country’s disparities, into the national spotlight.

Juan Carlos Paiz, one of the country’s prominent businessmen, ate a meager dinner with his host family and saw how scarce vegetables and fruit were in the diet. “What you see with the very poor is that they think every minute about surviving,” he says. “Then they can’t think of the future.”

But Paiz, a leader of the country’s competitiveness council, left the experience thinking only of the future. What was child malnutrition and stunting doing to the economy, he wondered? If malnutrition held students back in school, how could they be prepared to join a work force demanding ever more technical skills?

Guatemala is the most populous country in Central America, with a population of about 15 million people, and nearly half of them are under 20 years old. This should deliver a “demographic dividend” from a generation of educated, creative workers. Instead, Paiz worries, the high rate of chronic malnutrition is delivering a generation with stunted possibilities. “If we don’t fix the malnutrition issue, we won’t have good education,” he says. “We’ll lose 20 percent of the brainpower of 50 percent of our people. Which is killing our demographic dividend.”

Spurred by this future-shock, Guatemala’s private sector magnates forged an Alliance for Nutrition and allied with the government and civil society efforts. “We reached the agreement that a country could not become competitive if the human capital that we had was malnourished since childhood, and it had its limitations,” says Alvaro Castillo, an Alliance for Nutrition founder. “How could we allow this to happen in our country? We have to do something.” (Watch excerpts from that interview here.)

Biguria welcomes this wide front in the movement, for he knows that political commitment can waver. In Guatemala, presidential administrations are limited to one four-year term, which is precious little time for social reforms to take hold; one administration’s policies are often ignored, if not reversed, by the next administration. He hopes the fight against malnutrition can transcend governments.

In the restaurant within a clothing store, Biguria opens two boxes and retrieves a model of his Casita de los 1,000 Dias, the 1,000 Days House. He built it to give structure to the government’s commitment to reduce childhood malnutrition and stunting by improving conditions during the critical 1,000 Days period. That is the time — from the beginning of a woman’s pregnancy to the second birthday of her child — when good nutrition is vital for the proper development of a child’s brain and body. Any malnutrition shock during this time can leave a child stunted both physically and mentally, imposing a lifetime sentence of underachievement.

The casitas would serve as places for both health care and public education. There’s a room for maternal and infant care, a handwashing station for sanitation training, scales and measuring boards for charting a baby’s growth, an ecological stove that contains the smoke from wood fires, solar panels on the roof, and open-space classrooms for lessons on nutrition and hygiene. Biguria says all the building materials can be transported in the back of a pickup truck; he has the cost down to $5,000 a house.

He believes the 1,000 Days house can also be a place to unify Guatemalans. He would like to see the casitas constructed all over the country. But so far none have been built in Guatemala. So he keeps up the pressure on the government and business partners to act.

“We have to invest. We have to push and make people understand that we need to continue,” he says. “Now the discussion is on the table. It’s not just a political commitment, but a moral commitment to the country as well.”

Roger Thurow’s reporting on the 1,000 Days is supported by the Pulitzer Center on Crisis Reporting.

Left: A tale of two Guatemalas: On the left, mostly Mayan families living in the highlands can receive staples like rice and beans provided by organizations like USAID. On the right, diners sample dishes at the high end Café Saúl in Guatemala City. Photos by Hari Sreenivasan

Roger Thurow was a reporter for The Wall Street Journal for 30 years, 20 of them as a foreign correspondent based in Europe and Africa. His coverage of global affairs spanned the Cold War and the fall of communism in eastern Europe, the release of Nelson Mandela, the end of apartheid, the wars in the former Yugoslavia and the humanitarian crises of the first decade of this century -- along with 10 Olympic Games.
In 2003, he and Journal colleague Scott Kilman wrote a series of stories on famine in Africa that was a finalist for the Pulitzer Prize in International Reporting. Their reporting on humanitarian and development issues was also honored by the United Nations. Thurow and Kilman are authors of the book, “ENOUGH: Why the World's Poorest Starve in an Age of Plenty.”
In May 2012, Thurow published his second book, “The Last Hunger Season: A Year in an African Farm Community on the Brink of Change.”
Thurow joined The Chicago Council on Global Affairs as a senior fellow for global agriculture and food policy in January 2010; he is the columnist of the Council's Global Food for Thought blog. In 2012, he also became a Fellow at the ONE Campaign.