Naureen Ahmed’s mother, Seema, was a beautiful artist who would twirl around their Arkansas home to the tunes of Bollywood classics. Years later, when Ahmed had her own daughter, her mother mailed her a box filled with baby clothes she crocheted herself.

But most of the time, Ahmed saw another side to her mother, who struggled with schizophrenia and was often detached. Ahmed and her two sisters did their own laundry as young children and packed their school lunches, picking up the slack.

“We didn’t tell anybody,” Ahmed said about her mother’s mental illness. Her Pakistani-American family feared the stigma and community reaction. They rarely invited people over, and Ahmed said the habit carried over into adulthood when even inviting her in-laws over for visits would evoke anxiety.

“When someone is mentally ill, you make changes to your behavior to accommodate, and those things can carry on to you, and then to your children,” she said. “And we don’t know that until we talk about it.”

“We have to stop making people feel ashamed.”

Her experience with her mother led Ahmed and her sisters to create SEEMA — named after their mother, who died in 2012 — to give people struggling with mental illness and their family members an avenue for support.

The organization gives family members of the mentally ill the community and space for open conversation that her family didn’t have years ago, Ahmed said. “We have to stop making people feel ashamed.”

SEEMA is a sub-group of MUHSEN (Muslims Understanding & Helping Special Education Needs), a nonprofit organization based in Naperville, Illinois, dedicated to creating a better understanding of disabilities in the Muslim community. It was at a Muhsen event last year that Ahmed admitted for the first time that her mother struggled with mental illness.

“The second I said it, I burst out crying. I never said it out loud,” Ahmed said.

SEEMA (Support Embrace Empower Mental Health Advocacy), officially launched in January 2018, now has chapters in Chicago and Atlanta, hosting support groups with licensed therapists at community centers and mosques. A four-step guide on the website describes how people can create a SEEMA chapter in their own community. 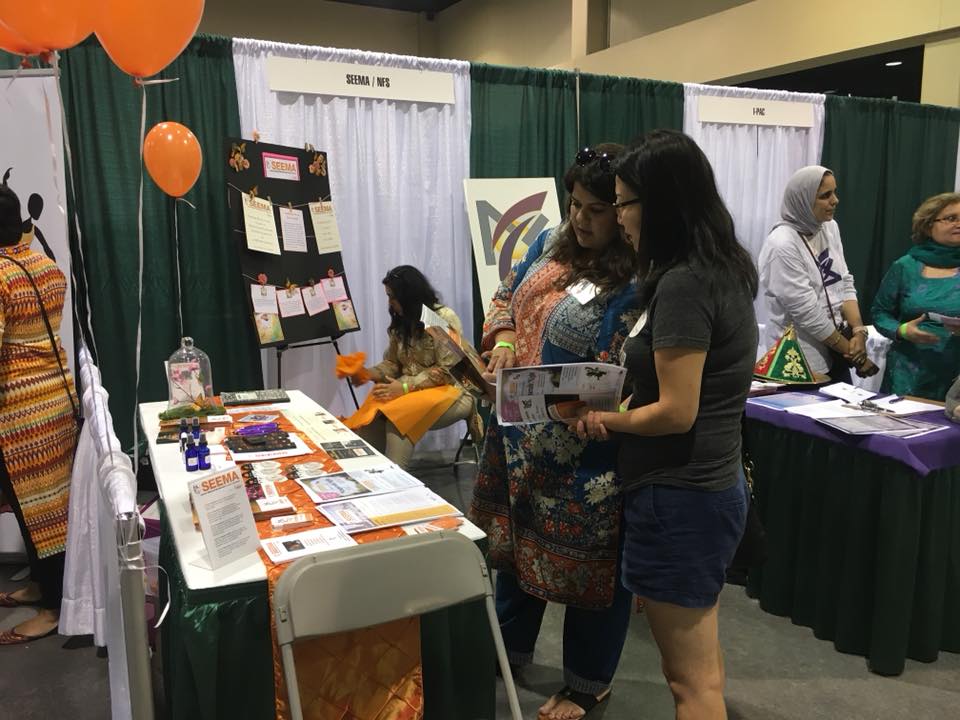 SEEMA, with chapters in Chicago and Atlanta, raises awareness and provides support for those struggling with mental illnesses. Photo courtesy of SEEMA

SEEMA is open to both Muslims and non-Muslims. But mental health resources that are attuned to culture may help address a gap in specialized care for a diverse population.

Sameera Ahmed, director of the Family and Youth Institute, said there is no monolithic Muslim culture and there should not be a formulaic approach to a Muslim client. But there are some “cultural norms and forces that inform the client’s experience,” she said.

“Many Muslims, across different ethnicities, share common existential beliefs about the role of God (or Allah), morality, and emotional health that are distinct from other religious traditions,” which are helpful for counselors and psychologists to know, she wrote in a guide co-edited with Mona Amer, called “Counseling Muslims: Handbook of Mental Health Issues and Interventions.”

The increased surveillance and discrimination after 9/11 were only some of the stressors Muslims experienced, though those were the areas that got the most attention in media coverage following the terrorist attacks, said Kameelah Rashad, founder of the Muslim Wellness Foundation. “Much of the focus on Muslim mental health (reported) in the media has been geared toward seeing the impact of 9/11, ignoring the existence of Muslim communities prior to it,” she said.

In reality, there are many factors that could contribute to stress and mental health issues in the Muslim community, including those that accompany “multiple marginalized identities,” Rashad said. “If we’re simply talking about religious discrimination, we’re also missing the impact of oppression, poverty, anti-blackness and lack of economic opportunity,” she said.

“What we’re hoping to do is complicate this idea that Muslim communities should only be reduced to their religious identity and this also brings in opportunity for allyship and solidarity,” Rashad added.
According to Dr. Farha Abbasi, a psychiatrist and assistant professor in the Department of Psychiatry at Michigan State University, the mental health field in the United States is mostly geared toward one demographic. “The system itself is a huge structural barrier to care, it’s very standardized to a white male consumer. From the care and techniques that we provide, they’re very white-centered.”

“When someone comes in you have to understand who they are and where they’re coming in — you can’t take a cookie cutter approach,” Ahmed said.

Jessica Yasin, a Muslim woman and mother of three living in the suburbs of Chicago, attended one of SEEMA’s support groups this year. Yasin said an article Naureen Ahmed wrote about her mother and her inspiration to start SEEMA led her to attend the support group.

“I understand what’s happening to my body and mind now. And I feel more in control.”

It was there that Yasin, who was recently diagnosed with severe depression, said she first came to terms with her own mental illness. “For the first time ever I didn’t feel alone anymore. I met people I knew, that my family knew, and I realized that people like me are hiding this because of the stigma.”

Yasin now regularly meets with a therapist she found through the Khalil Center, a community wellness center that uses faith-based approaches based in Islam along with the science of psychology.

Her depression is “not gone, but I can manage and control it a lot better than I had,” Yasin said. “I understand what’s happening to my body and mind now. And I feel more in control.”

Later this month, SEEMA will host an art therapy night in Georgia. For Ahmed, it’s another way of honoring her mother, who loved to paint.

See more profiles of people making a difference in our Agents for Change series.