The governor of Washington declared a state of emergency Saturday after a man died there of COVID-19, the first such reported death in the United States. More than 50 people in a nursing facility are sick and being tested for the virus.

Gov. Jay Inslee directed state agencies to use “all resources necessary” to prepare for and respond to the coronavirus outbreak. The declaration also allows the use of the Washington National Guard, if necessary.

“We will continue to work toward a day where no one dies from this virus,” the governor vowed.

Health officials in California, Oregon and Washington state are worried about the novel coronavirus spreading through West Coast communities because a growing number of people are being infected despite not having visited an area where there was an outbreak, nor apparently been in contact with anyone who had.

The man who died was in his 50s, had underlying health conditions and no history of travel or contact with a known COVID-19 case, health officials in Washington state said at a news conference. A spokesperson for EvergreenHealth Medical Center, Kayse Dahl, said the person died in the facility in the Seattle suburb of Kirkland.

Dr. Frank Riedo, medical director of Infection Control at Evergreen, said local hospitals are seeing people with severe coronavirus symptoms but it’s probable that there are more cases in the community.

“This is the tip of the iceberg,” he said. 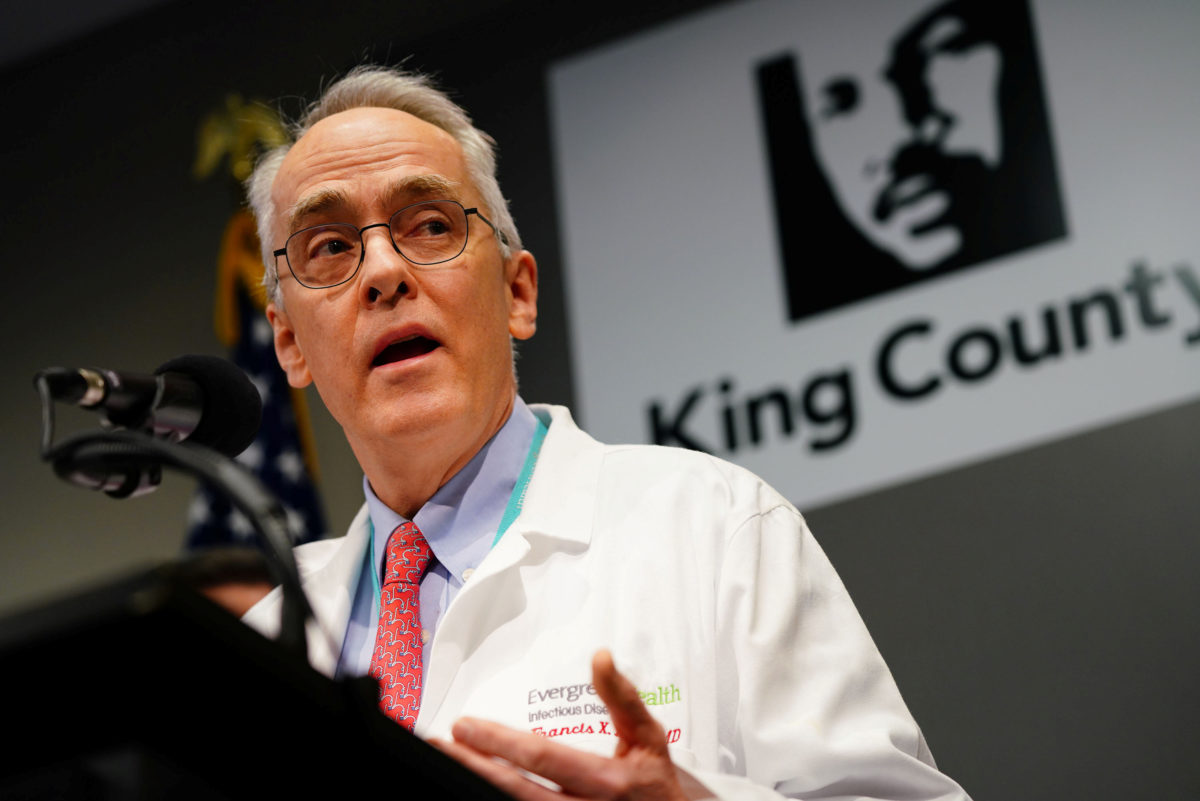 The health officials reported two cases of COVID-19 virus connected to a long-term care facility in the same suburb, Life Care Center of Kirkland. One is a Life Care worker, a woman in her 40s who is in satisfactory condition at a hospital, and the other is a woman in her 70s and a resident at Life Care who is hospitalized in serious condition. Neither had traveled abroad.

“In addition, over 50 individuals associated with Life Care are reportedly ill with respiratory symptoms or hospitalized with pneumonia or other respiratory conditions of unknown cause and are being tested for COVID-19,” Seattle and King County officials said. “Additional positive cases are expected.”

Overlake Medical Center in Bellevue, Washington, said a health care worker from Life Care is a patient at the hospital. The woman, who is in her 40s, was admitted to the hospital Thursday and is in stable condition, the center said.

Amy Reynolds of the Washington state health department said in a brief telephone interview: “We are dealing with an emergency evolving situation.”

No one answered the phone at Life Care, but Ellie Basham, its executive director, said in a statement that residents and employees are being monitored and those with symptoms or who were potentially exposed are quarantined. The facility has banned families, volunteers and vendors as a precaution, Basham said.

A growing number of cases in California, Washington state and Oregon are confounding authorities because the infected people hadn’t recently traveled overseas or had any known close contact with a traveler or an infected person.

The Santa Clara County Public Health Department announced Saturday the case of a fourth person in the county infected with coronavirus, The case is of a woman who is a “household contact” of a person who is hospitalized with the virus, the health department said in a news release.

The woman has not been hospitalized and is not ill, the department said. 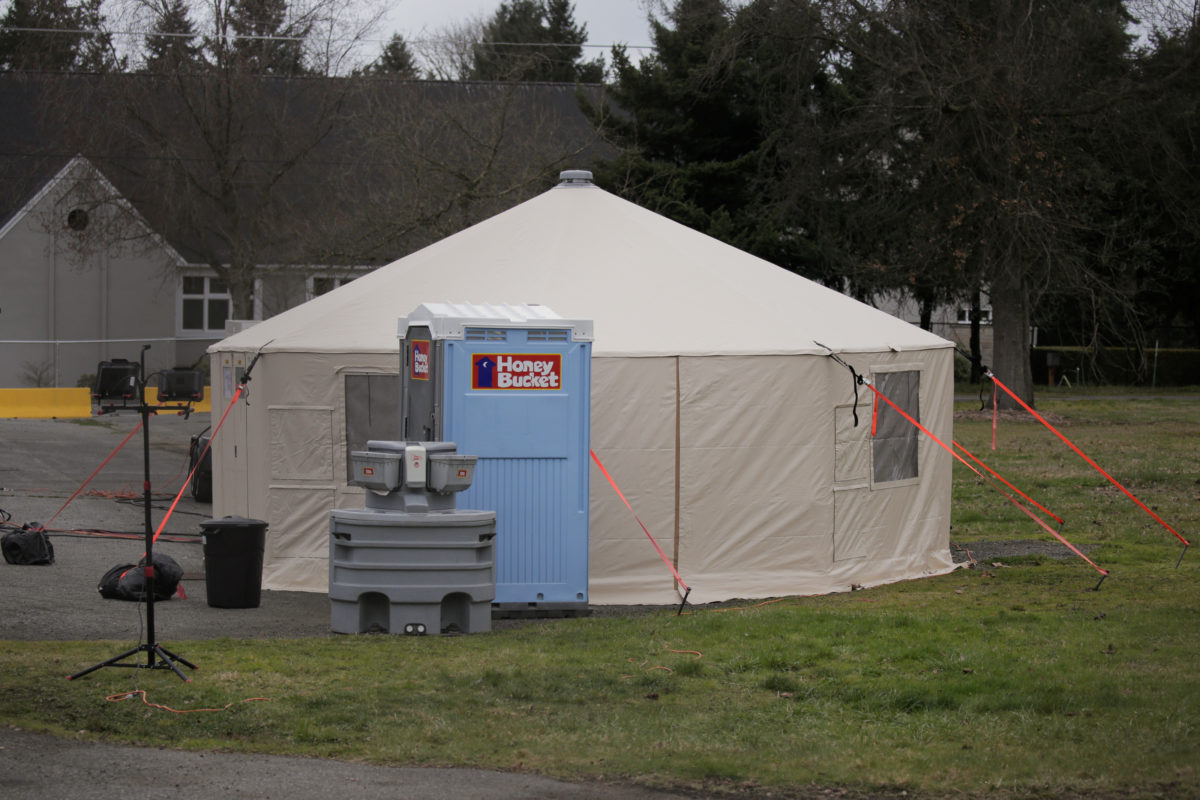 The U.S. has about 60 confirmed cases. Worldwide, the number of people sickened by the virus hovered Friday around 83,000, and there were more than 2,800 deaths, most of them in China. A 60-year-old U.S. citizen died in Wuhan in early February.

Most infections result in mild symptoms, including coughing and fever, though some can become more serious and lead to pneumonia. Older people, especially those with chronic illnesses such as heart or lung disease, are especially vulnerable. Health officials think it spreads mainly from droplets when an infected person coughs or sneezes, similar to how the flu spreads.

The number of coronavirus cases in the United States is considered small. But convinced that they will grow, health agencies are ramping up efforts to identify those who might be sick.

To achieve more rapid testing capacity, the U.S. Food and Drug Administration issued an accelerated policy Saturday enabling laboratories to use tests they develop. FDA Commissioner Stephen Hahn said his agency is “rapidly responding and adapting to this dynamic and evolving situation.”

The California Department of Public Health said Friday that the state will receive enough kits from the U.S. Center for Disease Control and Prevention to test up to 1,200 people a day for the COVID-19 virus — a day after Gov. Gavin Newsom complained to federal health officials that the state had already exhausted its initial 200 test kits.

Oregon was able to more quickly identify a case — an employee of an elementary school in Lake Oswego near Portland because it was able to test a sample locally. School district officials said Saturday the employee had been visited in the hospital by several people before he was diagnosed. Those individuals have been asked to observe a two-week quarantine and are being closely monitored.

“Toilet paper is golden in an apocalypse,” one Costco employee said.

Employees said the store ran out of toilet paper for the first time in its history and that it was the busiest they had ever seen, including during Christmas Eve.

The district is deep-cleaning all its schools and all school buses with the goal of having students back in class Monday, said Superintendent Lora de la Cruz. But Forest Hills Elementary, where the man worked, is closed until Wednesday, marking two weeks since he was last at the school.

Earlier U.S. cases include three people who were evacuated from the central China city of Wuhan, epicenter of the outbreak; 14 people who returned from China, or their spouses; and 42 American passengers on the Diamond Princess cruise ship, who were flown to U.S. military bases in California and Texas for quarantining.

The U.S. government looked at sending dozens of Californians, several of whom tested positive for the virus, who had been aboard the cruise ship to a state-owned facility in Costa Mesa, California. Local officials objected, saying they weren’t included in the planning and wanting to know what safeguards would be in place to prevent spread of the virus. The U.S. government said it didn’t need to use the facility after all.

At UC Davis Medical Center in California, at least 124 registered nurses and other health care workers were sent home for “self-quarantine” after a Solano County woman with the virus was admitted, National Nurses United, a nationwide union representing registered nurses, said Friday.

The case “highlights the vulnerability of the nation’s hospitals to this virus,” the union said.

The other case in Washington was a woman in in King County in her 50s who had recently traveled to South Korea, authorities said. Neither patient was seriously ill.

Left: The Life Care Center of Kirkland where a number of seniors are at risk of novel coronavirus is pictured in Kirkland, Washington, U.S. February 29, 2020. Photo by Ryan Henriksen/Reuters.