Psychological first aid must be part of disaster relief

My grandmother was filled with grief as she told me by phone about life on the island of St. Thomas after Hurricanes Irma and Maria had blasted through it. “Tears keep running from my eyes uncontrollably because everyone on the island is suffering,” she lamented, then paused, too sad to continue. I could picture her in her car charging her cellphone — the engine idling in the background. The decades-old mango tree that I had climbed as a child was now uprooted and stripped of all its leaves; the vibrant tropical landscape replaced by an eerie brown hue. “Everything is now rubble,” she said.

At 80 years old, Gramma, as I affectionately call her, had weathered many storms. But Irma and Maria were different. These Category 5 hurricanes ravaged my island home, wreaking havoc not only on St. Thomas, but also on our sister islands of St. Croix and St. John. Many other islands across the Caribbean, including Puerto Rico, had suffered a similar fate. Together these hurricanes left thousands of people homeless, jobless, and without food, water, or electricity. For many on these islands — and other places where natural disasters have recently struck — it is all becoming too much to bear.

The danger of these disasters lies not only in the tremendous loss of life and property, but also in the psychological toll they take on survivors. When disaster strikes, mental health support should be a top priority. Amidst the chaos, though, it often isn’t.

Sadness, shock, anxiety, and fear are normal stress responses for those who live through a natural disaster. For many of them, these feelings fade away. For others, though, they persist, affecting their quality of life and ability to function. Survivors of natural disasters are at risk for developing post-traumatic stress disorder (PTSD), anxiety, depression, and other mental health issues.

After Hurricane Andrew destroyed huge swaths of the Bahamas and Florida in 1992, about half of survivors met criteria for a new-onset mental health disorder such as PTSD, major depression, or other anxiety disorder. 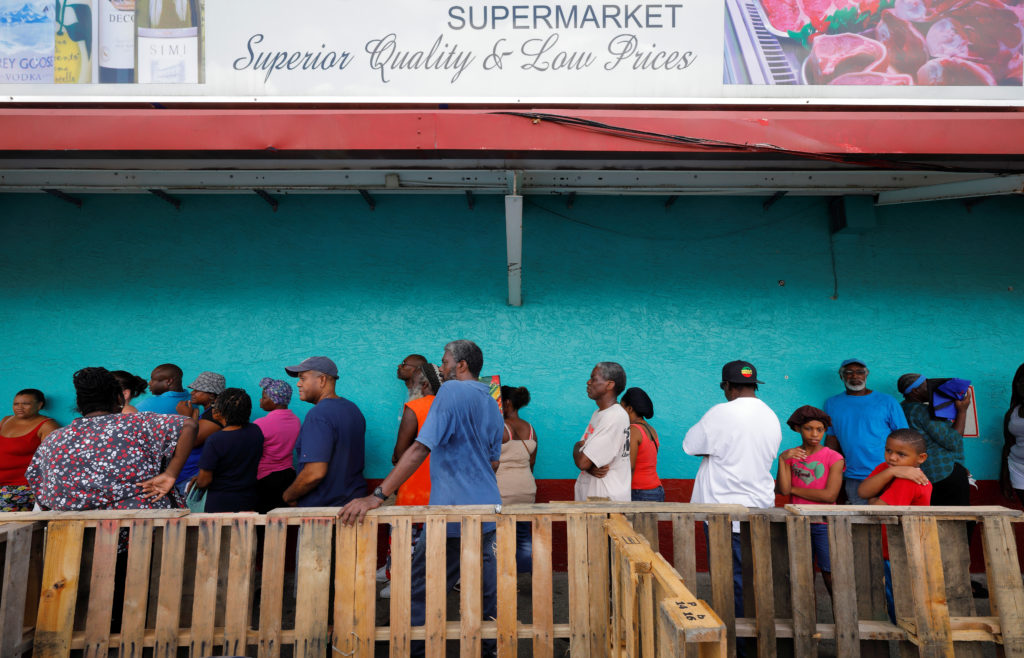 Residents of the U.S. Virgin Islands wait behind a makeshift barricade for admission to a local supermarket shortly after curfew was lifted in Charlotte Amalie, St. Thomas, U.S. Virgin Islands, on Sept. 16, 2017. Photo by Jonathan Drake/Reuters

As a physician, as well as someone with strong ties to the Virgin Islands, I am troubled by what could happen to my home if mental health is not adequately addressed. Post-traumatic stress is linked to increased rates of substance abuse, job-related difficulties, and violent behavior. Rates of suicide could increase, as occurred after Hurricane Katrina struck the Gulf Coast in 2005.

Relief efforts after Irma and Maria have been largely focused on food, supplies, and rebuilding the infrastructure. A quick scroll through social media sites dedicated to relief efforts in the Virgin Islands shows notices about food distribution sites, shelter locations, and disaster loan programs, but I have trouble finding any about mental health resources. Major organizations like the Red Cross share photos of cleanup kits and water delivery on their Facebook pages, but none about the mental health volunteers they typically deploy.

Almost 30 days after Irma hit, Dr. Michelle Davis, the commissioner of the Virgin Islands Department of Health, said during a press conference that federal mental health teams “finally landed in the territory” — one team for St. Thomas and another for St. Croix. With a population of 100,000 across the three main islands, two teams of psychologists, social workers, and a psychiatrist is simply not enough.

Psychological first aid — a strategy for addressing psychological distress after a disaster — may help build resilience and mitigate the effects of overwhelming trauma and loss. This isn’t just counseling or debriefing. It provides survivors with emotional support, coping skills, and connections to practical services.

Without this type of aid, we have already started losing ground. In fact, many Virgin Islanders have fled to the U.S. mainland, unable to cope with the devastation around them. In Puerto Rico, there have already been reports of suicides.

The stigma of mental illness means that survivors are unlikely to seek help, so trained providers need to be embedded within communities. Aid organizations like the Red Cross need to deploy their disaster mental health volunteers to provide survivors with emotional support and connections to emergency resources. Furthermore, the local and federal government must develop an action plan that addresses the short and long-term psychological needs of the Virgin Islands and Puerto Rico.

READ NEXT: The storm has passed, but Puerto Rico’s health faces prolonged recovery

One could argue that mental health support is not a priority, that delivering food, water, and electricity and rebuilding the infrastructure should take precedence. I disagree. As Dr. Sandro Galea, now dean of the Boston University School of Public Health, said in an interview following the 2010 Haiti earthquake, “psychological first aid is key to giving people what they need to rebuild their lives. If people are not able to return to mental functioning, it results in the delay in return to well-being and building society.” While meals and infrastructure rebuilding are essential, psychological support is equally important.

When I got off the phone with my grandmother, I thought about the new world she had awakened to. Buckets scattered around her house to collect the rainwater that drips through the holes in her tattered roof. Her beloved island now unrecognizable. Hurricanes Irma and Maria have passed, but these storms have traumatized my grandmother and thousands of people across the Caribbean. Amid the relief efforts, we must not forget that mental health is an essential piece of their recovery.

Alani Gregory, M.D., is a resident physician in the Yale Primary Care Internal Medicine program. This article is reproduced with permission from STAT. It was first published on Oct. 20, 2017. Find the original story here.

Above: Vessels stored at a marina remain toppled 12 days after Hurricane Irma ripped through the island, in Charlotte Amalie on St. Thomas, U.S. Virgin Islands, on Sept. 16, 2017. Photo by Jonathan Drake/Reuters