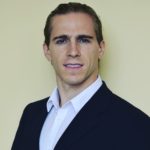 In rural areas with health care shortages, these doctors are answering the call

Despite some early hopes that isolation might protect rural areas of America from the worst of the pandemic, COVID-19 has infiltrated small communities in every corner of the country. And many of those places don’t have enough care providers even in more normal times.

Forty-six million people live in rural America. Compared to more densely populated metropolitan counties with cities of 50,000 people or more, rural counties suffered significantly higher death rates from the coronavirus in the six months from August through February. In early January, 95 percent of these counties were seeing 100 cases or more per 100,000 people, designated by the White House coronavirus task force as being in a COVID-19 case “red-zone.”

Recruiting primary care doctors who specialize in serving rural communities to these areas was already an ongoing battle and is now one made harder during the pandemic. Rural doctors also face challenges that can lead to more cases of COVID-19, like patients’ limited access to care, or lack of trust in the medical system, along with resistance to social distancing measures, vaccine hesitancy and doubts about the severity of the virus.

WATCH: Is your state lagging behind on vaccine rollouts? Here’s why

Many communities have turned to the National Health Service Corps (NHSC), the workforce branch of the Health Resource Service Administration, to help with these gaps.

Serving roughly 17 million Americans, the NHSC is designed to deploy physicians, mental health professionals, dentists and nurse practitioners to nonprofit clinics in health care shortage areas for two years, in exchange for education scholarships or loan repayment. Since the beginning of the NHSC 50 years ago, 63,000 primary care medical, dental and mental and behavioral health professionals have been placed this way. The majority of them stay.

In sparsely populated rural regions — often geographically isolated places with fewer than 500 people per square mile — more than half of people live in an area where there is a shortage of health professionals, meaning the ratio of primary care doctors to patients often exceeds 1:3,500, when the national average is around 1:2,300.

That high ratio can be felt a number of ways. One is gaps in routine care, explained Dr. Adrian Billings, a family medicine physician in Alpine, Texas. He works part-time in a clinic one county over, in Presidio, a community of about 7,000 people along the U.S.-Mexico border. In the 14 years he’s lived in the area, there has been no local physician. Normally, a population that size would need three or four family physicians, Billings said.

In emergency situations, a lack of doctors may be compounded by fewer medical resources.

In the midst of a pandemic going into its second year, “the need is even more acute,” Billings said.

The local hospital he works at doesn’t have an intensive care unit. In December, Billings, who chaired the national advisory council to the NHSC in 2020, spent 24 hours working to get a worsening COVID-19 patient transferred to a regional hospital with an ICU. He then spent the next 12 hours providing care in a clinic, without a break for sleep.

“The community health center docs are [like] the Marine Corps. They establish beachheads with emerging communities in tough situations,” said Dr. Jim Hotz, clinical service director of 18 community health centers in rural Southwest Georgia, where he was placed as a Service Corp member when he was 28 years old.

Fifty-five percent of graduates stay in the community where they served for NHSC at least 10 years past their allotted time. When Hotz, who was the inspiration for Michael J. Fox’s character in the 1991 movie “Doc Hollywood,” finished his commitment to the Service Corp, he stayed for more than 40 years.

“A big vein with family medicine and primary care in general is that we really, truly love our patients,” said Dr. Aaron Purser, a family medicine doctor who grew up in a small town in Georgia and is now serving his NHSC commitment in the northeast part of the state. “And not only do we try to improve their health, but we do develop relationships with them.”

Billings gives his personal phone number to patients; Holz started doing the same during the pandemic. These days, they say, patients call with questions at all hours.

One reason that much of rural America doesn’t have enough doctors is that few U.S. medical trainees currently come from rural communities — a problem the medical field also has with doctors of color, and Black doctors in particular.

In 2017, students with a rural background represented less than 5 percent of all incoming medical students though 17 percent of Americans are considered to be rural. There are also disproportionately fewer Black medical students entering training compared to the general population: 8 percent compared to 13 percent. And people of Hispanic or partially Hispanic ethnicity make up approximately 7 percent of incoming medical students and more than 18 percent of the general population. The NHSC focuses on recruiting physicians from underrepresented groups, including people of color, and seeks to retain these physicians in rural America. 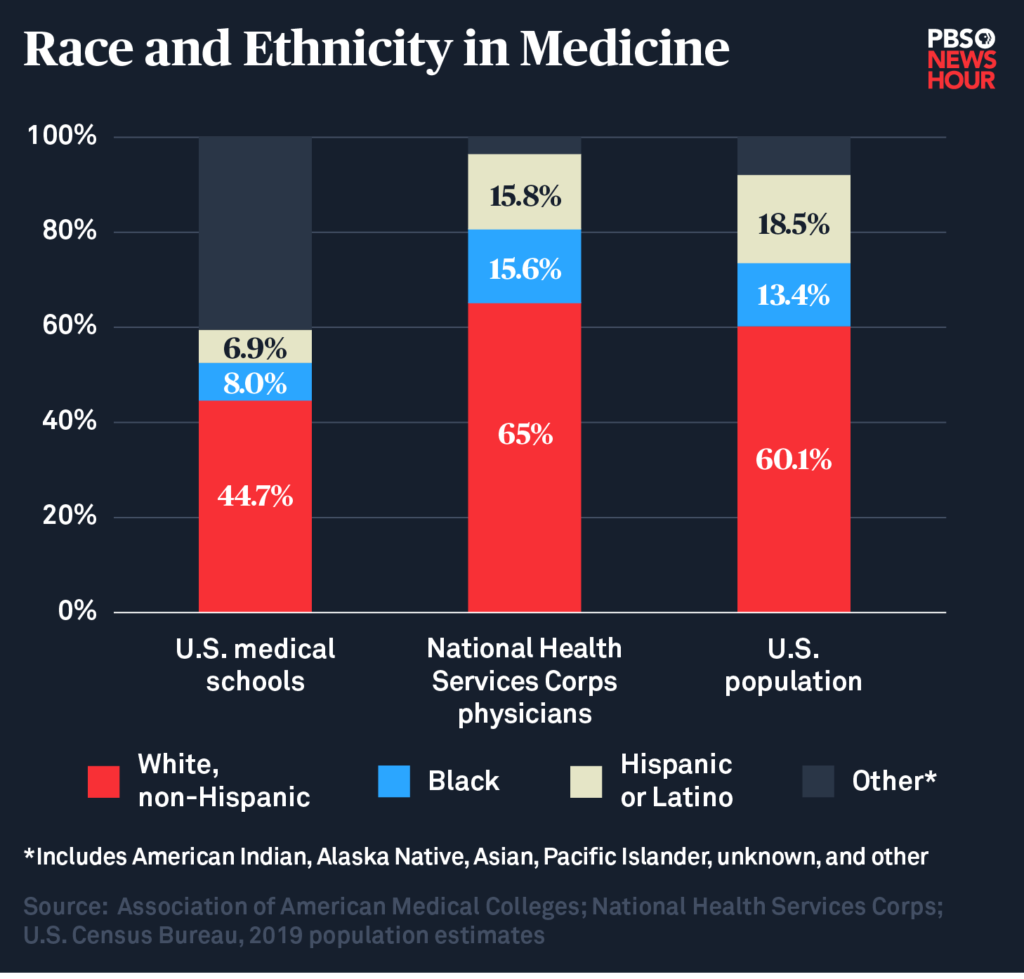 A history of racial discrimination has segregated many Black and Hispanic Americans into concentrated rural communities, which often suffer higher poverty rates. A shortage of health care professionals is more common also when more than half of the community is made up of a racial minority.

Around 85 percent of Hotz’s patients make less than $25,500 a year (putting them under the 200 percent poverty line for an individual in Georgia), he estimates, and 80 percent of his patients are African American.

A number of socioeconomic and health disparities have converged to make the pandemic especially devastating for some rural communities.

Residents of rural America experience higher rates of obesity, diabetes and hypertension, and are more likely to be smokers — all of which can make people more vulnerable to the effects of COVID-19. Hotz said rates of obesity and diabetes among his patients in the last few decades have increased more than the national average.

People in rural areas often have higher rates of poverty and are more likely to be uninsured. Around one-third of Billings’ patients are on Medicaid and another third are on Medicare. Many who speak Spanish as their primary language face a language barrier in communicating with health care workers. In some of these towns, in addition to long drives to hospitals and to clinics, many of the people struggle with access to the internet or even phones. Purser said that some of his patients do not have a phone.

The eight counties that Holtz’s clinics serve have endured economic hard times, as many jobs producing automotive parts, pharmaceuticals and even candy canes have left the region over the years. When it comes to social conditions that affect health, “We got a motherlode,” Hotz said.

The pandemic has also brought to light weaknesses in health care infrastructure in these communities. For instance, practitioners have had trouble getting severely ill patients transferred to better equipped hospitals. In March, there were two super-spreader events from funerals in Hotz’s community. “We ended up getting this incredible surge at one time when it first came out. We had an equivalent infection, hospitalization, and death rate as New York City,” he said. To accommodate the surge when the local hospital filled, temporary, separate facilities were built for COVID patients, and the National Guard was deployed to help.

Ongoing hospital closures add to the difficulty of recruiting doctors to rural communities. The job of local primary care physicians becomes more challenging when they lose  support of a local hospital, and with it, emergency medicine services and specialists. As a result, doctors can find themselves practicing outside of their comfort zone, practicing a broader scope of medicine than their urban colleagues — from delivering babies to administering emergency care — on a regular basis.

Rural hospitals often have lower patient volumes and are more reliant on public payers (Medicare and Medicaid). They also have much smaller profit margins than urban hospitals, and profitability is a reliable predictor of if a hospital will close or not.

Since 2010, roughly 120 rural hospitals have closed, and nearly a quarter of rural hospitals are currently vulnerable to closure. Among the states most at risk for rural hospital closures are the ones that have not expanded Medicaid under the Affordable Care Act.

WATCH: Rural hospitals were already struggling. Then the coronavirus hit.

The hospitals that remain open are often small and sometimes rely on local primary care physicians to work in them. In Texas, which has had the most hospital closures of any state since 2010, Billings said he is often pulled away from his clinic to attend to hospital needs. “We’re now also having to do more and more hospital work, and we are also delivering babies. And that’s a lot to ask of a generalist physician,” he said.

In Georgia, which is not a Medicaid expansion state, Hotz says reimbursement rates are so low that some rural areas can’t afford to run federally supported community health centers designed to provide care in underserved areas.

All of these factors make it harder for doctors to maintain practices and make rural areas less attractive to new practitioners. “That rural health care where you’re the only doc, it’s not economically feasible,” said Hotz.

“The same reason that the National Service Corps was created 50 years ago still exists today,” Billings said. “We still have a maldistribution of the health, workforce and resources in our country.”

The pandemic has put the problem in stark relief. “There was already a strain and now that strain is much worse and much deeper because of the pandemic,” said Amanda Pears Kelly, a representative for the Association of Clinicians for the Underserved, the lead NHSC advocacy group.

The 2021 COVID-19 stimulus package included $800 million to the NHSC, an infusion which enables state and local organizations “to immediately try to recruit and retain physicians” in the most vulnerable areas, said Pears Kelly.

Many states are incentivized to form their own scholarships, with a federal dollar-to-dollar matching model that helps offset training costs in return for practitioners to serve these vulnerable communities. Certain medical schools are also providing financial aid to those who choose to pursue primary care, but not necessarily in a rural location.

Many providers who are drawn to NHSC populations “feel that what they’re doing is a calling, that this is a mission,” Billings said. “We’re attempting to do domestic missionary work. And if not me, then who?”

Left: A lone vehicle travels a on the Pine Ridge Indian Reservation in South Dakota. Many residents have to travel long distances for dialysis treatment for diabetes — a routine that is becoming necessary for an increasing number of Native Americans across the rural United States. Photo by Andy Clark/Reuters