WASHINGTON — To save babies from brain-damaging birth defects, University of Pittsburgh scientist Carolyn Coyne studies placentas from fetuses that otherwise would be discarded — and she’s worried this kind of research is headed for the chopping block.

“I knew this was something that’s going to trickle down to the rest of us,” said Coyne. She uses the placenta, which people may not think of as fetal tissue but technically is classified as such because the fetus produced it, to study how viruses such as Zika get past that protective barrier early in pregnancy.

“It seems to me what we’re moving toward is a ban,” she added. If so, when it comes to unraveling what happens in pregnancy and fetal development, “we’re going to stay ignorant to a lot of things.” 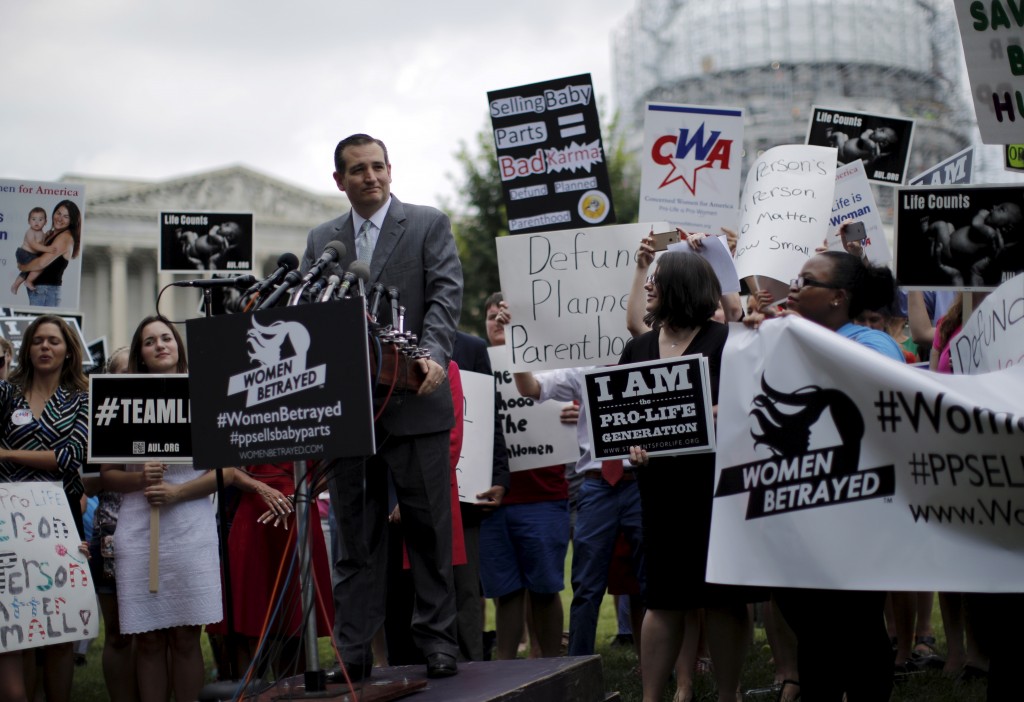 Republican presidential candidate Senator Ted Cruz (R-TX) speaks at the “Women Betrayed Rally to Defund Planned Parenthood” at Capitol Hill in Washington on July 28, 2015 after videos surfaced from Planned Parenthood that shed light on its practice of donating fetal tissue for research purposes, re-energizing Republicans, including GOP candidates such as Ted Cruz, in their long-term fight against the family planning service provider. Photo by Carlos Barria/Reuters

Different types of tissue left over from elective abortions have been used in scientific research for decades, and the work has been credited with leading to lifesaving vaccines and other advances. Under orders from President Donald Trump, the Health and Human Services Department abruptly announced on Wednesday the new restrictions on taxpayer-funded research, but not privately funded work.

Aside from the cancellation of an HIV-related project at the University of California, San Francisco, university-led projects that are funded by the NIH — estimated to be fewer than 200 — aren’t affected right away.

But as researchers seek to renew their funding or propose new studies, HHS said it will have to pass an extra layer of review, beyond today’s strict scientific scrutiny. Each project will have a federal ethics board appointed to recommend whether NIH should grant the money.

HHS hasn’t offered details but under the law authorizing the review process, that board must include not just biomedical experts but a theologian, and the nation’s health secretary can overrule its advice.

“I predict over time we will see a slow and steady elimination of federal funding for research that uses fetal tissue, regardless of how necessary it is,” said University of Wisconsin law professor Alta Charo, a nationally recognized bioethics expert.

Necessity is the crux of a fierce debate between abortion foes and scientists about whether there are alternatives to fetal tissue for research.

Zika offers a glimpse at the difficulty. Somehow, the Zika virus can sneak from the mother’s bloodstream across the placenta, which protects and nourishes the fetus, and target the fetus’ brain. It’s something researchers hope to learn to block.

READ NEXT: 4 in 10 babies born after Zika infection may have brain defects, researchers say

Studying the placentas of small animals or even monkeys isn’t a substitute because they differ from the human organ, said Emory University researcher Mehul Suthar. For example, the specific type of placental cell where Zika can lurk in humans isn’t thought to be present in mouse placentas.

And because the placenta continually changes as the fetus that created it grows, first-trimester tissue may show a very different vulnerability than a placenta that’s expelled during full-term birth, when it’s no longer defined as fetal tissue but as medical waste.

Suthar recently submitted a new grant application to study first- and second-trimester placental tissue, and is worried about its fate under the still uncertain ethics provision.

It “sounds a bit murky as to what the impact could be,” he said. It could be small, “or it could be an outright ban on what we’re doing.”

Anti-abortion groups argue there are alternatives, such as stem cells, growing organ-like clumps of cells in lab dishes, or using tissue taken from newborns as they have heart surgery.

Indeed, NIH is funding a $20 million program to research alternatives to fetal tissue and to prove whether they work as well.

“Taxpayer funding ought to go to promote alternatives that are already being used in the production of treatments, vaccines and medicines, and to expand approaches that do not depend on the destruction of unborn children,” said Mallory Quigley of the Susan B. Anthony List, which works to elect anti-abortion candidates to public office.

But dozens of medical and science organizations have told HHS there is no substitute for fetal tissue in studying certain — not all — health disorders, such as HIV, Zika, Alzheimer’s, Parkinson’s, spinal cord injury, and a variety of eye diseases.

To Pittsburgh’s Coyne, part of the political debate is a “completely unsubstantiated belief that not allowing research and science is going to prevent or stop abortions, which is not the case.”

“Other countries work with this in a regulated fashion and they will continue to outstrip us,” she said. “We have allowed patients’ interests to become collateral damage in the abortion wars.”

Left: The patient's entrance at the National Institutes of Health is shown in Bethesda, Maryland October 16, 2014. Nina Pham, the first Texas nurse to be diagnosed with Ebola after treating a Liberian man at a Dallas hospital, is being moved to the National Institutes of Health outside Washington, the agency said on Thursday. Pham, who was being cared for at Texas Health Presbyterian Hospital, will be transferred to an isolation unit at Bethesda, Maryland-based NIH on Thursday evening, NIH's Dr. Anthony Fauci told lawmakers at a congressional hearing on the handling of the virus in the United States. Photo by Gary Cameron/ Reuters