WASHINGTON — By the time President Donald Trump first spoke publicly about the coronavirus, it may already have been too late.

Interviewed at Davos, a gathering of global elites in the Swiss Alps, the president on Jan. 22 played down the threat posed by the respiratory virus from China, which had just reached American shores in the form of a solitary patient in Washington state.

“We have it totally under control,” Trump said on CNBC. “It’s one person coming in from China, and we have it under control. It’s going to be just fine.”

In the 11 weeks since that interview, the coronavirus has reached every corner of the globe. It has infected more than 500,000 Americans and killed at least 20,000. It has rewritten the rules of society, isolated people in their homes, closed schools, devastated the economy and put millions out of work.

When Trump spoke in Switzerland, weeks’ worth of warning signs already had been raised. In the ensuing month, before the president first addressed the crisis from the White House, key steps to prepare the nation for the coming pandemic were not taken.

Life-saving medical equipment was not stockpiled. Travel largely continued unabated. Vital public health data from China was not provided or was deemed untrustworthy. A White House riven by rivalries and turnover was slow to act. Urgent warnings were ignored by a president consumed by his impeachment trial and intent on protecting a robust economy that he viewed as central to his reelection chances.

Twenty current and former administration officials and Republicans close to the White House were interviewed for this account about the critical weeks lost before the president spoke to the nation on Feb. 26. Most spoke on condition of anonymity because they were not authorized to speak publicly about private discussions.

On New Year’s Eve, China informed the World Health Organization of a “mysterious pneumonia outbreak” spreading through Wuhan, an industrial city of 11 million.

The government closed a seafood market at the center of the outbreak, moved all patients with the virus to a specially designated hospital and collected test samples to send to government laboratories. Doctors were told to stay quiet; one who issued a warning online was punished. He later died of the virus.

The Pentagon first learned about the new coronavirus in December from open source reports emanating from China. By early January, warnings about the virus had made their way into intelligence reports circulating around the government. On Jan. 3, the head of the U.S. Centers for Disease Control and Prevention, Robert Redfield, received a call from his Chinese counterpart with an official warning.

Dr. Anthony Fauci, the government’s top infectious disease expert, was alerted to the virus around the same time — and within two weeks was fearful it could bring global catastrophe. 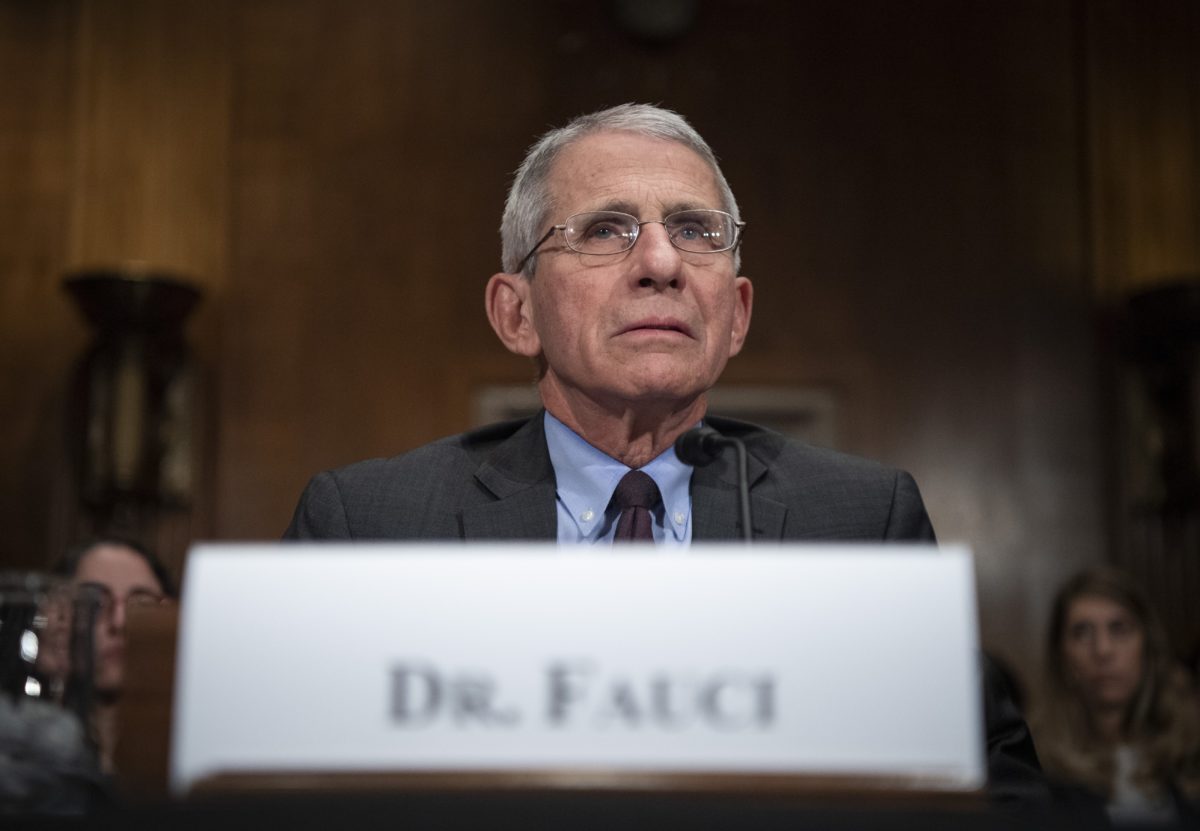 Quickly, U.S. intelligence and public health officials began doubting China’s reported rates of infection and death toll. They pressed China to allow in U.S. epidemiologists — both to assist the country in confronting the spread and to gain valuable insights that could help buy time for the U.S. response. U.S. officials also pressed China to send samples of the virus to U.S. labs for study and for vaccine and test development.

On Jan. 11, China shared the virus’ genetic sequence. That same day, the National Institutes of Health started working on a vaccine.

Ultimately, the U.S. was able to get China’s consent to send two people on the WHO team that traveled to China later in the month. But by then precious weeks had been lost and the virus had raced across Asia and had begun to escape the continent.

For much of January, administration officials were doing a delicate balancing act.

Internally, they were raising alarms about the need to get Americans on the ground in China. Publicly, they were sending words of encouragement and praise in hopes Beijing would grant the Americans access.

But while word of the virus was included in several of the president’s intelligence briefings, Trump wasn’t fully briefed on the threat until Health and Human Services Secretary Alex Azar called with an update on Jan. 18 while the president was at his private Mar-a-Lago club in Florida. 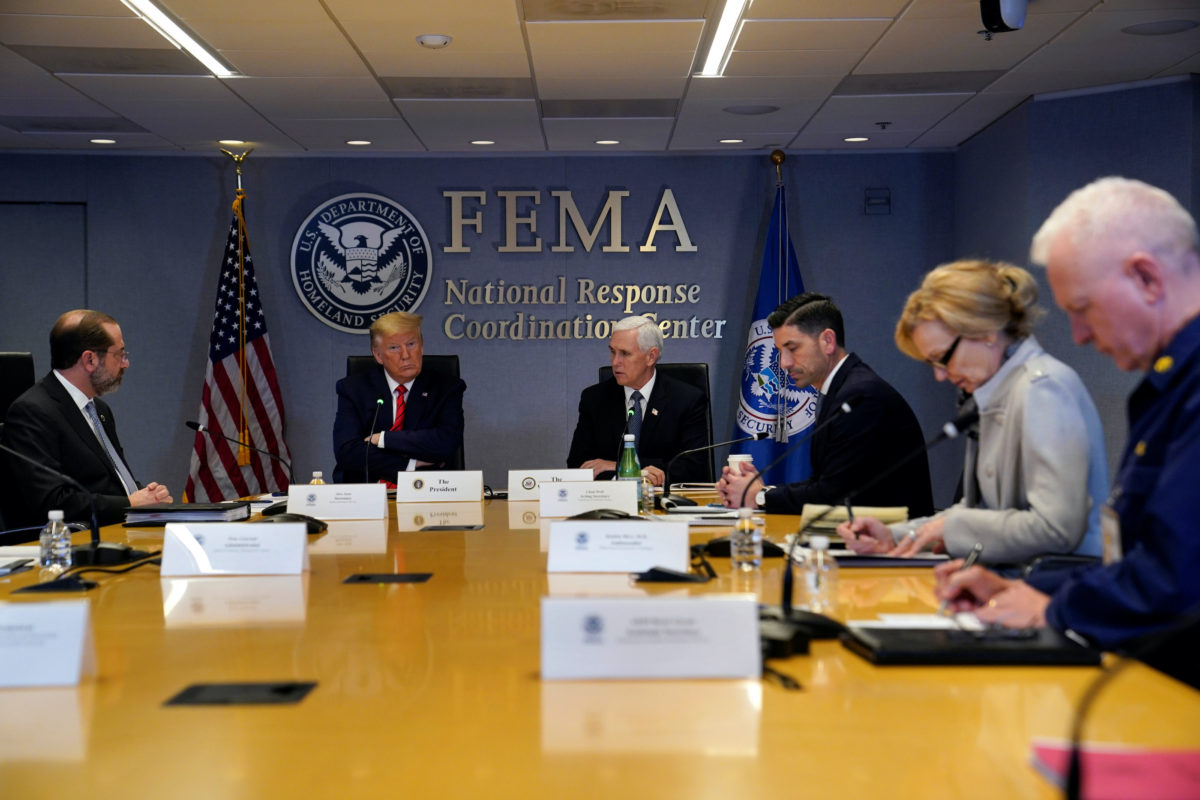 U.S. President Donald Trump, Vice President Mike Pence, Acting Secretary of the Department of Homeland Security Chad Wolf and Health and Human Services Secretary Alex Azar attend a teleconference with governors to discuss partnerships to ?prepare, mitigate and respond to COVID-19″ during a visit to the headquarters of the Federal Emergency Management Agency (FEMA) amid coronavirus fears, in Washington, U.S. March 19, 2020. Evan Vucci/Pool via REUTERS

Trump spent much of the conversation wanting to talk about vaping; he was considering a new policy restricting its use. White House officials now believe Trump didn’t fully grasp the magnitude of the threat to the U.S. in part because Azar, who was feuding with several members of Trump’s inner circle, did a poor job communicating it.

Azar was trying to walk a fine line between Trump’s upbeat statements and preparing the government for what might lie ahead. “America’s risk is low at the moment,” he later told House lawmakers. “That could change quickly.”

Moreover, the president was in the middle of his Senate impeachment trial and focused on little else, punctuating nearly every White House meeting with complaints about the Democrats out to get him, grievances he would continue late into the night on the phone from his private quarters.

Trump also had little desire to pressure Beijing or criticize its president, Xi Jinping, with whom he wanted to secure cooperation on ending a yearlong trade war before the reelection campaign kicked into high gear. When Trump fielded his first question about the virus in Davos, he enthusiastically praised Xi’s response, going well beyond the calibrated risk-reward messaging his aides were encouraging.

The West Wing was adrift.

By late January, acting chief of staff Mick Mulvaney held the post in name only as rumors swirled of his impending, post-impeachment departure. He was on the initial coronavirus task force, which was plagued with infighting. At the same time, the White House Office of Management and Budget was clashing with Azar’s HHS over money to combat the virus.

HHS wanted to send a special coronavirus funding request to Congress but the White House budget office resisted for weeks, insisting that HHS should instead repurpose $250 million of its existing budget to bolster the national stockpile by buying protective equipment. HHS, however, claimed that without congressional authorization it could not buy the needed quantities of masks, gowns and ventilators to rapidly bolster the national stockpile

Eventually, an initial request went to Congress for $2.5 billion in virus aid, an amount that lawmakers of both parties dismissed as too low. The bill that Congress quickly passed and Trump signed — the first of three so far — was for $8 billion.

Even as the two agencies fought, there was no influential voice in Trump’s orbit pushing him to act swiftly on the pandemic. Trump had surrounded himself with loyalists and few in the administration, including national security adviser Robert O’Brien, were able to redirect the president’s attention. In mid-January, meetings were being held at the White House, but the focus was on getting U.S. government employees back from China, which was still playing down how contagious the virus was.

A Jan. 29 memo from senior White House aide Peter Navarro accurately predicted some of the challenges faced by the U.S. from what would become a pandemic, though he was hardly the first to sound the alarm. But he, like Pottinger, was viewed by others in the White House as a “China hawk” and their concerns were rejected by others in the administration who did not bring them to the president.

On Jan. 30, the WHO declared the virus a global health emergency while Trump held a packed campaign rally in Iowa. The next day, the Trump administration banned admittance to the United States by foreign nationals who had traveled to China in the past 14 days, excluding the immediate family members of American citizens or permanent residents.

Trump styled it as bold action, but continued to talk down the severity of the threat. Despite the ban, nearly 40,000 people have arrived in the United States on direct flights from China since that date, according to an analysis by The New York Times.

On Feb. 10, Trump stood before thousands of supporters packed into a New Hampshire rally and declared: “By April, you know, in theory, when it gets a little warmer, it miraculously goes away.”

The crowd roared its approval at Trump’s unproven assertion. The Senate had acquitted Trump on the impeachment charges and the president shifted his focus toward reelection even as others in the administration keyed in on the virus.

Federal officials put the CDC solely in charge of developing a test for the virus and left out private interests, a choice that cost precious time when the resulting CDC test proved faulty.

Trump spent many weeks shuffling responsibility for leading his administration’s response to the crisis. He put Azar in charge of the administration’s virus task force before replacing him with Vice President Mike Pence toward the end of February. Even as the virus spread across the globe, prevailing voices in the White House, including senior adviser Jared Kushner and Treasury Secretary Steven Mnuchin, urged the president to avoid big steps that could roil financial markets.

The president had firmly linked his fate to Wall Street, and it took a tumble by the markets for Trump to ratchet up his response. In late February, while Trump was on a trip to India, the Dow Jones plummeted 1,000 points amid rising fears about the coronavirus.

Trump stewed about the collapse on his Feb. 26 flight back to Washington and lashed out at aides over comments made by a top CDC official, Dr. Nancy Messonnier, during a briefing the prior day, when she warned Americans that they would have to prepare for fairly severe social distancing.

The White House announced that Pence would brief the media about the response that night. But Trump took the podium instead and has not relinquished the stage much since, belatedly making himself the face of the battle against the virus.

When Trump first took the lectern in the White House briefing room to speak about the virus, the U.S. had 15 coronavirus patients.

“We’re at that very low level, and we want to keep it that way,” Trump said. “We’re very, very ready for this.”

Left: U.S. President Donald Trump stands in front of a chart labeled “Goals of Community Mitigation” showing projected deaths in the United States after exposure to coronavirus as 1,500,000 - 2,200,000 without any intervention and a projected 100,000 - 240,000 deaths with intervention taken to curtail the spread of the virus during the daily coronavirus response briefing at the White House in Washington, U.S., March 31, 2020. Photo by Tom Brenner/Reuters.