Beatrice Arrivée couldn’t wait to ditch virtual learning and walk into school for her first day of sixth grade — while wearing a mask.

“Nobody likes masking, but I would rather wear a mask than not,” 11-year-old Arrivée said.

Yet that simple back-to-school precaution has become a source of controversy in her community and around the country.

As millions of students prepare to enter the academic year, rates of COVID-19 infection are soaring due to the highly contagious delta variant, and hospitalizations and deaths are making a grim climb upward. That is especially true in parts of the United States with low vaccination rates, such as Mississippi, where 35 percent of residents are fully vaccinated. That state is close to the bottom of the list for COVID vaccinations — neighbor Alabama is currently the least vaccinated state in the nation. Public health experts have urged vaccination rates more than double those seen in much of the South to slow the virus’ spread.

Across the country, pandemic response continues to be fragmented as some states take more urgent measures while others dismiss warnings from public health experts. In California, Gov. Gavin Newsom said teachers need to get vaccinated or be tested regularly for COVID-19, but in Florida, Gov. Ron DeSantis has threatened to withhold pay if schools mandate masks.

“We are not panicking,” Mississippi Gov. Tate Reeves, who has resisted calls for mask mandates, said Wednesday on Facebook. Hours later, his state’s leading health experts pleaded for more people to get vaccinated and take basic steps to protect themselves and others, such as wearing a mask.

Overwhelmingly, people who are unvaccinated have suffered the worst outcomes, including death, when they have gotten sick. Children under 12 are still too young for their shots and — though severe illness is still rare among kids — hospitals are seeing growing numbers of children admitted. To protect the most vulnerable against delta, doctors and health experts say masks are an effective tool.

Coronavirus rates are climbing where Arrivée lives in Oxford, Mississippi, a college town set in rolling hills and known for William Faulkner and its literary scene, Ole Miss football and the riots that followed the admission of the first Black student to attend the school’s all-white campus.

Oxford is typically sleepy during the steamy summer doldrums. But lately it’s been the site of online clashes between parents over the school district’s temporary indoor mask mandate, which will expire Aug. 20. Until then, K-12 students and staff are required to wear face coverings in school. 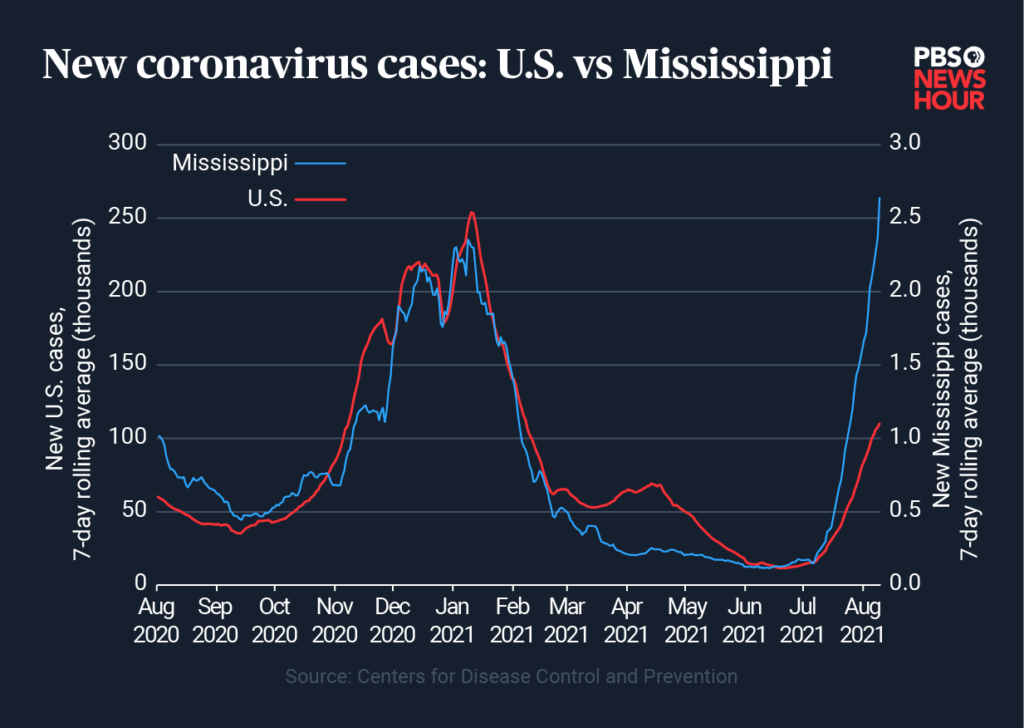 On Arrivée’s first day back in class last Monday, she and her classmates masked up. But, she said, one boy kept pulling his mask down, telling classmates his dad doesn’t believe he should have to wear one.

Arrivée’s mother, Frances Kneupper, worries that divisive talk about masks and vaccines among parents in one of Mississippi’s top public school districts will spill over into the classroom. A college professor who teaches medieval history at the University of Mississippi, Kneupper, 46, has been harassed while wearing a mask on campus. Kneupper said that while exiting a university building, a male student whom she did not know said “F— masks!” as he walked past her.

The moment stunned her, but she could handle it. She was unsure, however, how her 11-year-old child might react if someone were to speak to her that way.

The delta variant has fueled “a dramatic upswing” in known cases all over Mississippi and almost entirely among the unvaccinated, Dr. Paul Byers, state epidemiologist with the Mississippi State Department of Health, said during a virtual news briefing on Thursday. That includes children too young to be inoculated.

Less than two weeks into August, more than 4,000 students across the state have tested positive for COVID, the Clarion-Ledger reported Wednesday. The risks to children are real, said Dr. Thomas Dobbs, the state health officer, during an Aug. 5 news briefing with reporters.

“I want to make sure everybody understands,” Dobbs said. “You can’t fill a classroom with non-immune kids without a mask on with the most contagious coronavirus we’ve ever seen circulating, and expect for it not to spread. It’s just biology.”

Throughout much of the pandemic, COVID’s effect on children has often been seen or dismissed as fairly mild. But as virus variants emerge and research adds up, our understanding of the toll — for all age groups — has evolved. Growing evidence suggests that some children who are infected with the virus have also developed symptoms of long COVID — nausea, trouble breathing and intense headaches. And having a more transmissible variant, like delta, spread in a community means that more children will end up very ill than in past surges.

When a lot of people get sick all at once, the resources available to treat them all rapidly start to run out. This week, Dr. LouAnn Woodward, vice chancellor for the University of Mississippi Medical Center, tweeted that the state had run out of ICU beds.

The South has lately seen an off-season spike of respiratory syncytial virus, a respiratory illness that is more dangerous for young children, and can require hospitalization. With flu season approaching, doctors are worried the potential combination of viruses could put serious stress on the health care system. By Wednesday, 10 ICU beds were briefly available, but 238 people were waiting in emergency rooms for them, according to Jim Craig, who directs health protection for the Mississippi State Department of Health, who added that staffing issues pose an obstacle to critical care. 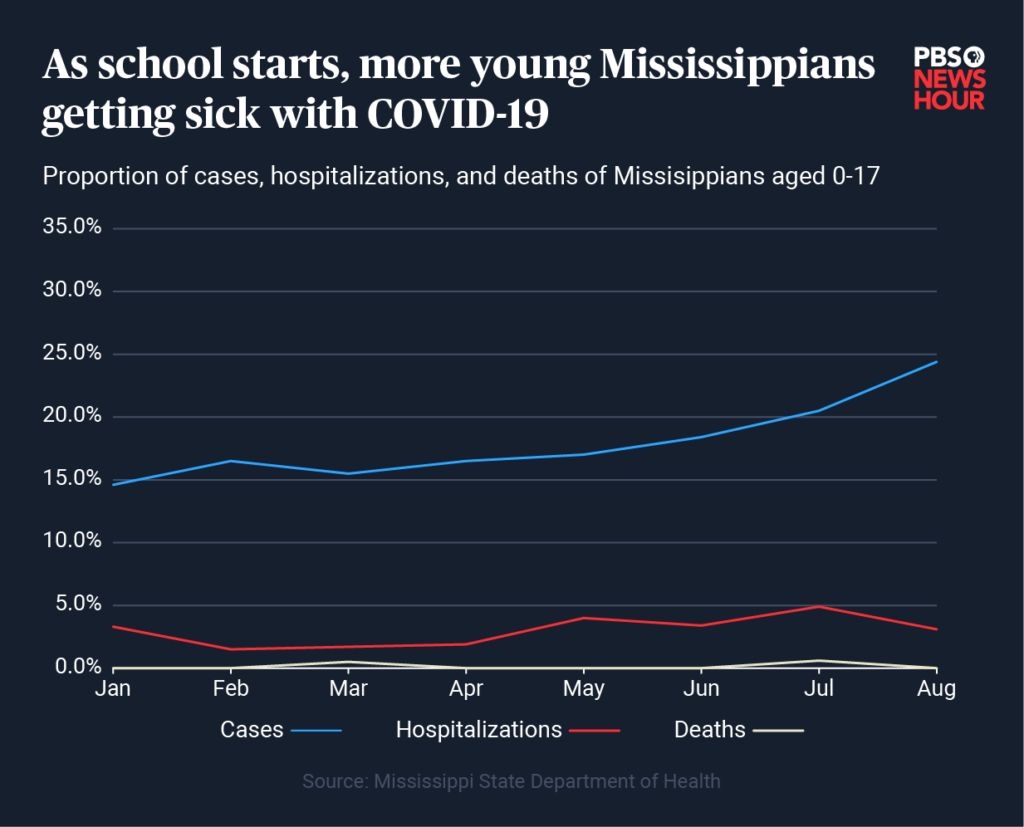 In Lamar County, where Dr. Anita Henderson — president of the Mississippi chapter of the American Academy of Pediatrics — sees patients, schools recently transitioned back to virtual learning after more than 500 people in the school system, including 442 students, tested positive for the virus. They had been back in classrooms for fewer than 10 days.

“In Mississippi, there’s a small but vocal minority that seems to be driving the conversation” against mask mandates, Henderson said.

The group Henderson leads is one of several medical professional groups in the state that has joined with the Centers for Disease Control and Prevention to call for masks in schools. In the last few days, dozens of new cases have been confirmed in Oxford and the wider Lafayette County, the Oxford Eagle reported, all before 18,000 university students return. When they do, Henderson said, “We fully believe those college kids are going to be contracting and spreading coronavirus and adding to our case loads,” given that only a fifth of the state’s residents aged 18 to 24 are fully vaccinated.

‘I keep waiting for the adults in the room’

His decision has put school officials in a position of juggling politics, public health and kids’ educational needs at the same time. On July 26, Oxford’s school board members voted 4-1 to make masks optional for the academic year, prompting protests from parents (None of the school board members returned PBS NewsHour’s request for comment). Days later, and less than a week before school was scheduled to begin, Superintendent Bradley Roberson overrode the board’s vote. He decided everyone had to mask up indoors from Aug. 2 to Aug. 20.

Educators are being asked to be public health experts during a pandemic when policymakers forgo making decisions that protect children’s well-being , Roberson told the PBS NewsHour.

A first-year superintendent, Roberson knows the students in his district desperately need to catch up. Kids missed a combined 19,558 school days because they had to quarantine — and test scores in math and English have plummeted for many, he said. Going into the school year, Roberson said he had hoped to focus on ways to prepare students to be world-ready. Instead, he is buried in hundreds of emails from angry parents about face masks. He is begging them for grace and hoping that Mississippi’s leaders do what they were elected to do.

“To me, I just want guidance. Period. And I think that would be helpful for all superintendents across the state of Mississippi,” Roberson said. “We’re asked to make decisions, and we’re not experts in that area.”

Susan Stearns, a parent in the school district, is taking no chances. She withdrew her son, Oscar, on Aug. 2, days after the school board’s vote because she fears for his health and safety. Born at 25-weeks gestation, he spent his first six months in a hospital’s intensive care unit and has endured respiratory issues that have put him through a revolving door of doctors and hospital care. Masks pose a choking hazard for Oscar, who was diagnosed with cerebral palsy, because he chews restlessly, she said. That is why he relies on those around him to wear face masks.

Oscar’s pulmonologist told Stearns it wasn’t safe to send him to school. She said she told her, “We haven’t seen anything like delta before.”

While Roberson has put a temporary indoor mask mandate in place, Stearns said she predicts that the sheer trajectory of cases is “going to be a problem beyond Aug. 20.”

“I keep waiting for the adults in the room to show up and make the decision for everybody to just wear a mask,” Stearns said.

She had looked forward to the day when her 5-year-old son could attend his local public school and thrive with the support that had taken months to coordinate. A college history professor, Stearns could finally focus on her career — put on hold while the coronavirus spread and her son’s life remained at risk. Now they must keep waiting.

Left: As millions of students prepare to enter the academic year, rates of COVID-19 infection are soaring due to the highly contagious delta variant, and hospitalizations and deaths are making a grim climb upward, especially in Mississippi, where public health leaders are alarmed and say more suffering is inevitable without masks in schools and higher vaccination rates. Photo by Edmund D. Fountain for The Washington Post via Getty Images