When President Donald Trump and North Korean leader Kim Jong Un met for a second summit, some speculated in advance that an official end to the Korean War might have been one outcome. (It wasn’t.)

For many Americans, some who weren’t even alive during U.S. involvement in the conflict, the Korean War seemed to end on Feb. 28, 1983, the day when 121.6 million viewers watched the final episode of the TV show “M*A*S*H,” making it the most watched television broadcast in American history.

(No other scripted show has come close. It was not until February 2010 when the Super Bowl XLIV surpassed the number of total viewers, but not in ratings or share. For the 1983 finale, CBS charged sponsors $450,000 for each 30-second block of commercial time, a sum worth more than $1,000,000 today.)

The hit television show was loosely based on the 1970 Robert Altman film of the same name and even more loosely on a 1968 novel, “M*A*S*H: A Novel About Three Army Doctors,” by former U.S. Army surgeon H. Richard Hornberger, who wrote under the pen name of Richard Hooker.

The Mobile Army Surgical Hospital, or MASH, concept was first deployed by the U.S. Army during World War II. They were initially called Auxiliary Surgical Groups and were an attempt to move surgical care closer to wounded soldiers than the fixed-in-place field hospitals then in existence. These units were based on a concept dating back to the Napoleonic wars, when doctors struggled to save the lives of soldiers wasted by cannons, muskets, buckshot, and shrapnel. Some were mortally wounded, others just needed to be patched up and sent back into the fray. In the midst of battle, these doctors were forced to develop a system of setting priorities in their gory duties. They called it triage, from the French word trier, which means to sort out.

The U.S. MASH units of the Korean War were located close enough to the front that wounded soldiers might be more expeditiously treated, but were distant enough so that the surgeons, nurses, and other personnel would not be exposed to direct combat. Tent-based, the people in MASH units worked long hours and endured horrific stresses of warfare. The key word, of course, was mobile and they moved from location to location on, at least, a monthly basis. (In the final episode of “M*A*S*H,” the fictional 4077th does move to a different location but only rarely did so in previous episodes). 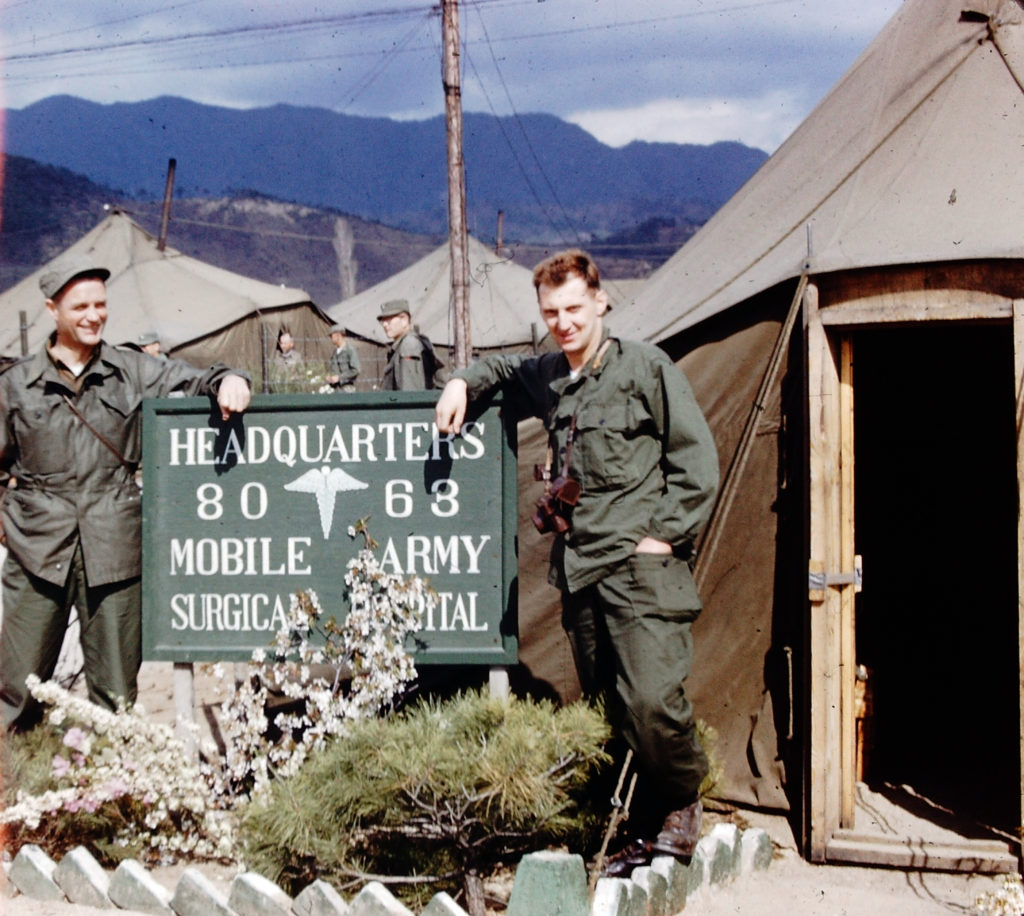 In 1951, Dr. Hornberger was drafted out of his surgical internship, inducted into the U.S. Army, and assigned to the 8055th MASH, which traveled along the 38th parallel, the now infamous demilitarized zone dividing the Korean peninsula into North and South Korea. The 8055th was one of 10 fully-functioning mobile hospitals operating during the Korean War.

Hornberger, who created Hawkeye to represent his own audacious surgical exploits, pioneered the use of arterial repairs on the front lines of war. This was still a relatively new procedure, time-consuming, and then forbidden by the U.S. Army. The surgeons at the 8055th flouted such rules because they felt that to not repair such injuries, and prevent needless amputations of countless limbs, would be to disobey their Hippocratic Oath, something they may have seen as a far more important bond than the one they took upon induction into the military.

It took Hornberger more than a decade to write his novel, an act that helped him deal with the trauma he saw and experienced in Korea. It took another five years before he finally secured a publisher, William Morrow and Company. After the war, he returned to his native Maine and practiced as a thoracic surgeon there. He died in 1997 at the age of 73.

Ironically, for all the money the television show made for its producers, writers, developers, actors and the CBS Television Network, Hornberger sold the rights for a ridiculously low amount and only earned $500 per episode (the equivalent of a few thousand dollars today).

There are, of course many similarities to Hornberger’s novel to the film and television show, but none more critical to the success of all three than the sarcastic surgeon with the heart of gold, Benjamin Franklin “Hawkeye” Pierce. In Alan Alda’s memorable performances, there was always a healthy dose of Groucho Marx thrown in to carry off more than a decade of terrific one-liners mixed with the character’s heartfelt empathy for his patients.

The television series, which ran from 1972 to 1983, increasingly articulated the nation’s growing disillusionment with the terrible human costs of the Vietnam War. But Hornberger, who rarely watched the show, resented the character based on his own life being tied to such sentiments. In an interview with Newsweek magazine he said that while the show accurately portrayed what a MASH unit looked like during the Korean conflict, the show “tramples on my memories.” Later, in the doctor’s obituary for The New York Times, his son William Hornberger said:

“He liked the movie because he thought it followed his original intent very closely, but my father was a political conservative, and he did not like the liberal tendencies that Alan Alda portrayed Hawkeye Pierce as having. My father didn’t write an anti-war book. It was a humorous account of his work, with serious parts thrown in about the awful kind of work it was, and how difficult and challenging it was.”

For my generation of doctors, who came of age in the 1970s and graduated from medical school and trained in the 1980s, M*A*S*H was a vitally important influence on our choice of medicine as a career, even for those of us who decidedly were not surgeons. Every time a young doctor of that era crab-walked across a hospital heli-pad to meet a helicopter-ambulance carrying an acutely ill patient, he or she replayed the opening scene of all 256 episodes of M*A*S*H* in their minds, hoping to emulate Hawkeye Pierce and the rest of his goofy gang of medics.

Re-watching that last episode the other week (available on Hulu), I was startled to find tears in both eyes as the cast said goodbye to one another and to the American public. That is, until Hawkeye and Margaret “Hotlips” Houlihan, the doctor and nurse who antagonized each other longer than the Chinese, Korean and U.S. armies by five-fold, embraced and locked lips for a 36 second long kiss (a veritable eternity on television). It was then that I recalled how much the 4077th Mobile Army Surgical Hospital made a teenaged boy from Southfield, Michigan laugh, think, and aspire to become a doctor just like Hawkeye Pierce.