4 things to watch during the Trump-Kim summit

What will come out of President Donald Trump and North Korean leader Kim Jong Un’s closely watched meeting this week is far from certain. Predictions vary widely, from vague, unsubstantial statements about denuclearization to major announcements such as a declaration to officially end the Korean War.

The summit, which is being held Wednesday and Thursday in Hanoi, Vietnam, marks the second time Trump and Kim will meet face to face.

The two leaders first met last year in Singapore where they signed an agreement to work toward “a lasting and stable peace regime,” as well as the “complete denuclearization” of the Korean Peninsula.

The statement that came out of the Singapore summit lacked detail, and there has been much debate since then about whether North Korea has taken significant steps to denuclearize.

Foreign policy analysts believe the Trump administration is more prepared for this summit than it was last year. U.S. officials have been meeting in advance with their North Korean counterparts in recent months.

But the Trump administration has also been sending mixed messages ahead of this week’s summit.

As a result, even with all of the preparation, analysts say that much of what goes into the agreement guiding U.S.-North Korean relations in the coming months will depend on what happens during the two days in Hanoi.

The optics around high-profile international negotiations often draw too much attention, said Balbina Hwang, a former State Department adviser in the George W. Bush administration and visiting professor at Georgetown University. But “in this case, [the optics] are really important,” Hwang said.

Which officials attend the meetings and how long the meetings last could offer clues about whether the two countries will reach a deal, and of what magnitude. 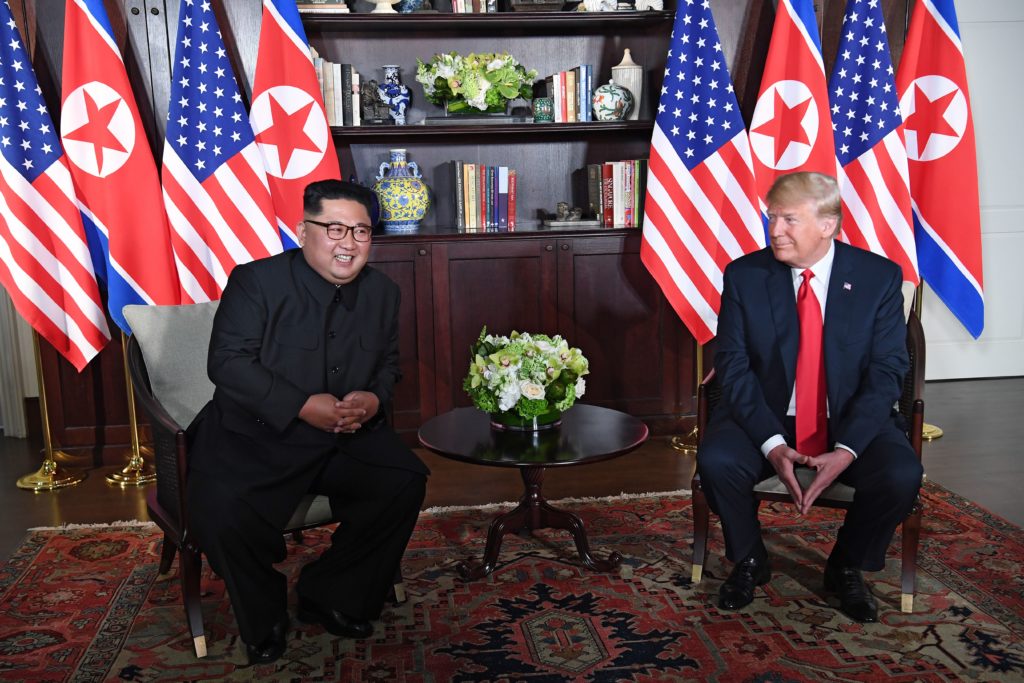 President Donald Trump and North Korea’s leader Kim Jong Un sit down for their historic meeting in Singapore on June 12, 2018. The leaders held a one-on-one without interpreters during the first summit. Photo by SAUL LOEB/AFP/Getty Images

Trump, Secretary of State Mike Pompeo, and acting White House chief of staff Mick Mulvaney are all scheduled to meet Kim and his advisers Wednesday night local time for a brief greeting and a dinner.

But on Thursday, Trump and Kim are expected to meet one-on-one with no one else in the room other than interpreters, as they did last year in Singapore.

The prospect of that solo meeting “makes everyone anxious because of what they could say without their advisers there,” said Jenny Town, managing editor and producer of 38 North, an online policy journal that focuses on North Korea.

At the same time, Hwang said, a one-on-one conversation that lasts for hours could mean the two leaders are making progress toward a major deal.

Concessions on both sides

What a potential agreement would include, and what the U.S. would give up to seal a deal, is another issue.

Trump administration officials recently told reporters that the U.S. has three overarching goals for the summit: to develop a shared understanding of what complete denuclearization means; create a road map for how to achieve it; and put a freeze on the development of North Korea’s weapons of mass destruction and missile programs.

To get those concessions, the U.S. might have to agree to a treaty to end the Korean War, ease economic sanctions on North Korea or reduce the number of troops on the Korean Peninsula. The U.S. has 28,000 troops stationed in South Korea, which are widely seen as a stabilizing force in the region.

Such concessions might have been unthinkable under previous presidents, but Trump has long been critical of U.S. military bases abroad and has a vested interest in coming away with a major agreement after playing up the negotiations for months.

“He doesn’t like small ball. He likes big things, so he may walk into this and say, ‘What if I put troops on the table, what will you give me?’” said Victor Cha, a former director for Asian Affairs at the National Security Council during the George W. Bush administration.

Foreign policy experts have argued that any U.S. concessions should be matched by North Korea committing to take detailed, verifiable steps toward denuclearization.

“I don’t think anyone thinks there will be a road map for complete denuclearization. But if they could get a work plan for phase 1, concrete measures North Korea would take, and reciprocal measure by the U.S., that would be a good deal,” Town said.

Some experts have speculated Kim might agree to close Yongbyon, which is believed to be North Korea’s main nuclear development and research site. He could also offer to destroy other missile test sites and the tunnel systems used to store missiles. 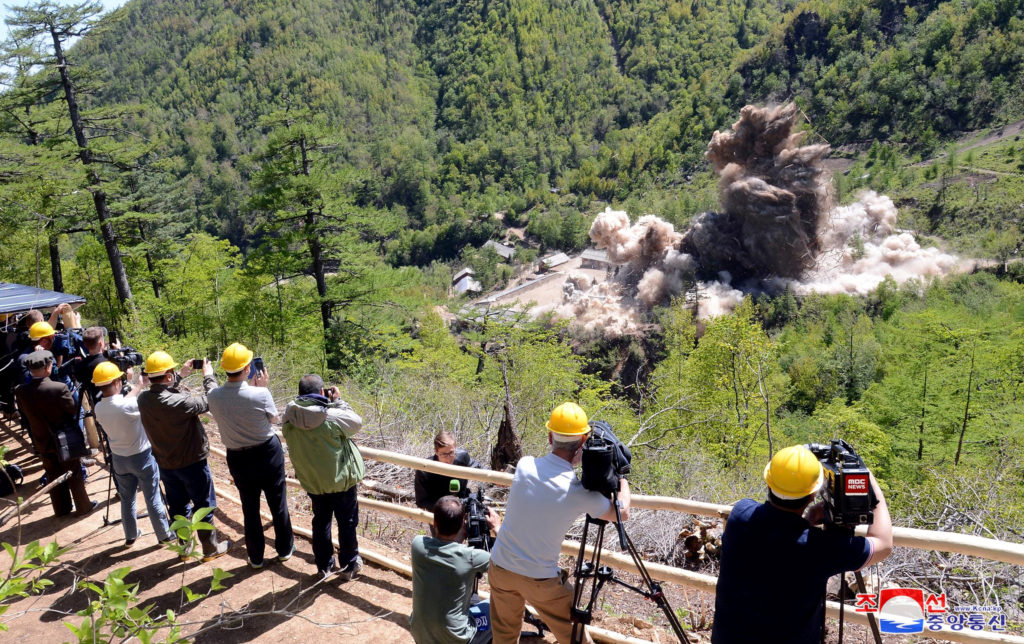 This undated photo released by North Korea’s Korean Central News Agency on May 24, 2018 shows what it said is the dismantling of North Korea’s nuclear test center. North Korea has not allowed in inspectors to verify the site was completely destroyed. Photo by KCNA/via Reuters

Many analysts say those steps would be significant, but they worry Kim will instead agree to other concessions that are largely for show. He could, for example, let inspectors into the Punggye-ri nuclear test site that was demolished last year. Trump praised the move as a “smart and gracious gesture,” but many analysts said Punggye-ri was largely obsolete before it was dismantled, and had little impact on North Korea’s nuclear capabilities.

The regime could also operate other facilities the U.S. does not know about, or it could simply lie about the steps it is taking toward denuclearization, critics warn.

“We are too focused on denuclearization being the litmus test for whether this summit is a success or failure,” she said. If North Korea did offer to destroy its nuclear weapons, that would raise “gigantic red flags” because it means Kim might have other capabilities — such as biological weapons — that he believes are more effective than nuclear weapons, Hwang said.

How the deal affects other nations

Whatever Trump and Kim do is likely to have ramifications for other countries, particularly South Korea and China.

On Monday, South Korea suggested Trump and Kim could agree to formally end the Korean War, which lasted from 1950 and 1953 but was never officially ended with an end-of-war declaration.

“[South Korean] President Moon Jae-in is all out for normalization and possible reunification,” said Han Park, a professor emeritus at the University of Georgia who worked as an unofficial negotiator between the U.S. and North Korea. “Washington should exploit that.”

But other experts warn that the U.S. should be clear about what an end-of-war declaration means. The U.S. and South Korea would likely see the declaration as symbolic, but North Korea might demand the U.S. remove troops from the region because it would see them as inconsistent with peace. 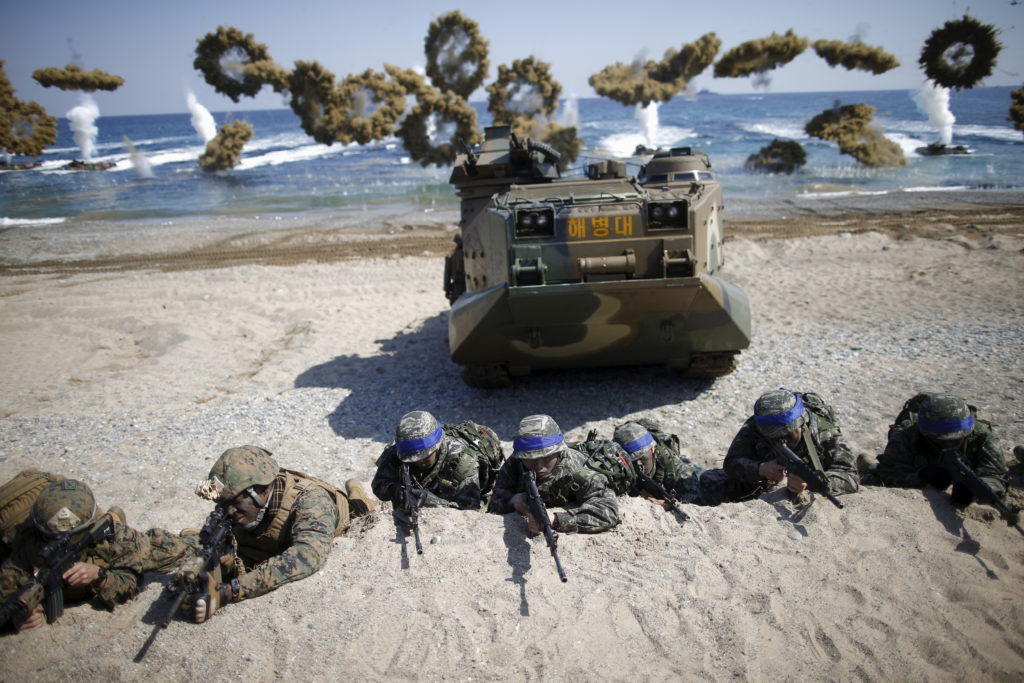 Any change in economic sanctions against North Korea could also have significant ramifications for other Asian nations. The easing of sanctions would make North Korea less reliant on China and could open up a new market for future global investments.

Trump recently told reporters that sanctions against North Korea are “on in full” ahead of the summit, but that he could unilaterally decide to ease some of the sanctions as part of a deal.

South Korea and China have also already eased some sanctions over the past year.

The agreement vs. what Trump and Kim say

While a written agreement is important, “what matters more than anything else is what the president says,” said Laura Rosenberger, a fellow at the German Marshall Fund who worked on the National Security Council during the Obama administration.

During the Singapore summit last year, for example, many people were caught off guard when Trump said he agreed to suspend military exercises with South Korea. There was no mention of the drills in the written deal.

If Trump promises to do something else not in the written document this year, “the North Koreans will believe what he says is a binding agreement,” Rosenberger said.

And if the U.S. does not keep Trump’s promise, Kim could use that as a reason not to hold up his side of the bargain either, she said.

Left: A person walks past a banner showing North Korean and U.S. flags ahead of the North Korea-U.S. summit in Hanoi, Vietnam, on February 25, 2019. Photo by Kim Kyung-Hoon/Reuters

Mexico tries new approach to asylum-seekers at the border