Many Americans are getting back to normal this summer, embracing the things they used to do without thinking — dining indoors, jetting off on vacation and hugging loved ones. But life has also changed, and for some it shows in new habits.

In the United States, the coronavirus pandemic seems to be loosening its hold, with nearly 180 million people at least partially vaccinated after more than a year of stringent public health recommendations. Getting to this point was both a personal and collective effort, as society yielded its routines in hopes of preventing sickness and death. From wearing masks, to work from home and remote school, and missing out on family time and doctors’ appointments, the coronavirus crisis altered our inner and outer lives. And behaviors picked up during the pandemic haven’t necessarily vanished once public health officials relaxed COVID-19 guidelines.

READ MORE: 5 charts that show where we are in the pandemic

Humans are creatures of comfort. When big changes upend life as we know it, adapting to that new world can feel weird, in part because it goes against our nature, said Katy Milkman, who directs the Behavior Change for Good Initiative within the University of Pennsylvania’s Wharton School.

“It’s our tendency to stick with the path of least resistance,” said Milkman, whose new book, “How to Change,” explores how people adapt and why some newfound behaviors stick and others don’t.

Indeed, some of the actions we took under duress have become hardwired habits and may endure after the pandemic has receded. They may help us think and live differently — maybe even better — in the future.

“We should keep track of the lessons learned during the pandemic and stick with whatever worked well or made us happy going forward,” said Tim Willems, an economist at the International Monetary Fund. 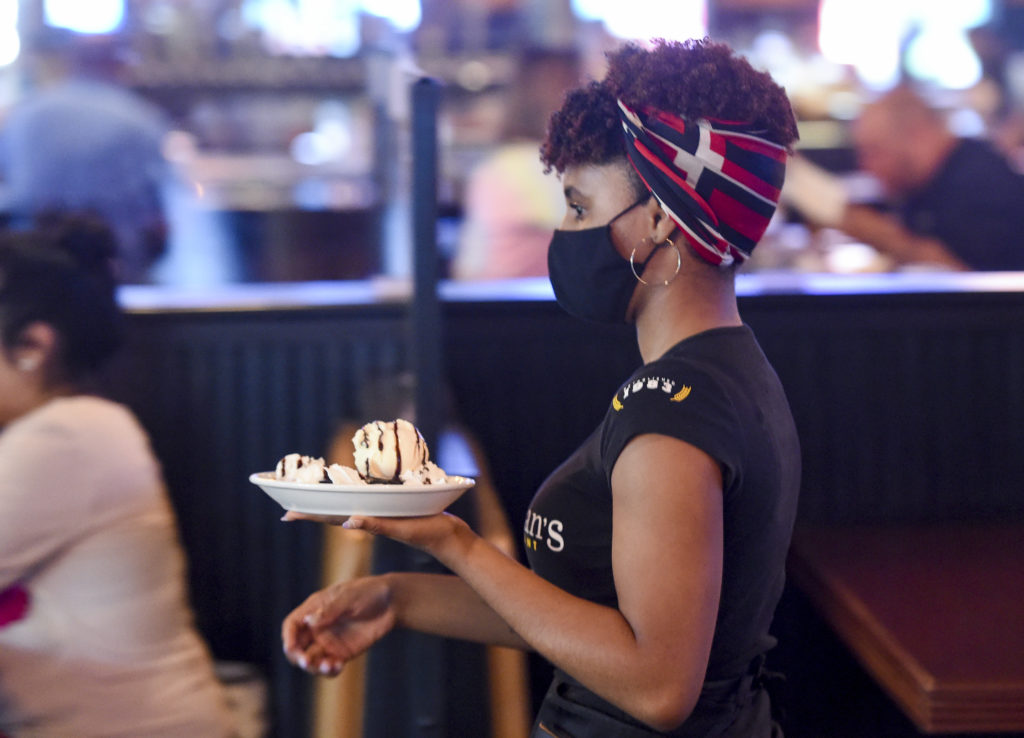 FILE PHOTO: As states drop mask mandates, many people continue to wear them out of habit and precaution. (Photo by Ben Hasty/MediaNews Group/Reading Eagle via Getty Images)

‘That mom who always has a mask’

In 2008, Tselaine Jones Smith developed a respiratory disease that grew so severe the pharmacist and mother of two from Bowie, Maryland, stepped away from her job and considered a lung transplant.

More than a decade later, Jones Smith, 53, said her pre-existing condition made her vulnerable to life-threatening infection if she were to catch the coronavirus, and that she needed to be incredibly cautious. She got vaccinated as soon as she could, Jones Smith said, but she still wears a face mask.

“I’ve told my children that I’m gonna be that mom who always has a mask,” Jones Smith said. “They have not taken off their mask yet either.”

Jones Smith was among a number of NewsHour readers who told us they’re not quite ready to shed their masks, no matter what the guidelines say.

Before the Centers for Disease Control and Prevention announced last month that people who were fully vaccinated against COVID-19 could stop wearing masks in almost all circumstances, 49 percent of Americans said they wore a mask in most places, even if it was not required, according to a PBS NewsHour/NPR/Marist poll that was conducted May 4-10, just ahead of CDC’s guideline change. Another 9 percent said they generally did not wear a face mask.

Wearing a mask protects those who wear them, but research suggests they are even more effective for protecting others, by capturing droplets and aerosols that might carry the virus when the wearer breathes or speaks. Along with social distancing measures, masking up likely offered spillover benefits beyond the coronavirus. For example, last flu season saw historic declines in infection in the U.S. during the pandemic, and health officials recorded a single pediatric death nationwide, compared with 199 in the 2019-2020 flu season.

“It’s not possible to tease apart which of these measures were more effective” in stemming the usual spread of cold and flu, said Dr. Alicia Budd, an epidemiologist with the CDC’s National Center Immunizations and Respiratory Diseases. As life assumes a more regular rhythm, Budd said she also expects to see more respiratory viruses circulate. Cases of respiratory syncytial virus — an illness that resembles the common cold but can develop into bronchiolitis or pneumonia in infants and young children — have already risen in the Southern U.S. this spring.

“Everyone will have more awareness that their health may depend on the health of others.”

Many NewsHour readers said they plan to keep wearing their face masks to avoid getting sick when flu season returns. (This may or may not suffice to prevent illness, Budd cautions.) And while the CDC maintains that those who have been inoculated against the virus do not need to wear masks in most settings, the World Health Organization on Friday urged everyone, including the fully vaccinated, to “play it safe” and continue to mask up in the face of the highly transmissible delta variant.

In the longer term, some people say they will continue to wear a mask not only for themselves, but also for others. They got used to wearing the masks, and the benefits to themselves and those around them outweigh costs like a little discomfort and fogged-up glasses.

Dr. Nancy Krieger, a social epidemiologist at the Harvard School of Public Health, said that is why she plans to keep wearing a face mask on the public bus when she returns to campus in August.

“Everyone will have more awareness that their health may depend on the health of others,” Krieger said. 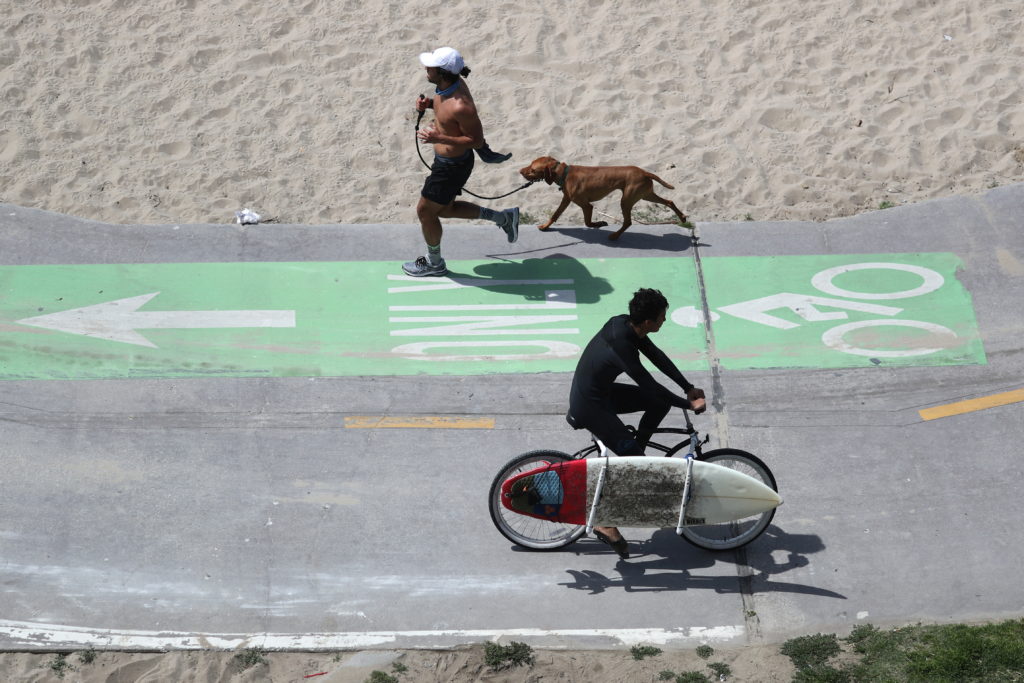 FILE PHOTO: People exercise on the bike path on Venice Beach in Los Angeles amid the coronavirus pandemic. Photo by Lucy Nicholson/ Reuters

Elaine Ferrell-Burns put on a bathing suit and stepped into a swimming pool for the first time in at least two decades last year because it was the only exercise her gym allowed as it eased COVID-19 restrictions. Since then, the 69-year-old from Portland, Oregon has “become a lap swimmer,” going four days a week. “It’s my positive addiction,” she said.

Stay-at-home orders, along with restrictions on gyms and restaurants, changed the way a lot of people ate and worked out. But it doesn’t mean that everyone will keep peddling their pandemic-purchased Pelotons.

Milkman said that while bad habits like eating ice cream for breakfast tend to stick, good habits like exercising daily tend to be “brittle” — break the routine and it’s hard to get back to it.

But there is hope of keeping those good pandemic habits if you have “found something that’s truly better … a way of doing things that made you happier or it was more efficient,” she said. Milkman called it “forced experimentation,” and sees it as a major outcome of the COVID era.

Pre-pandemic, she and her family used to frequent museums on weekends. When that wasn’t possible, they spent far more time hiking and enjoying parks and outdoor spaces — something she said they plan to keep doing.

With or without a pandemic, repetition and reward — such as pleasure or relief — are the keys to keeping good habits going, according to Milkman. Eventually, those good habits essentially go on autopilot. Once people get to that point, “they don’t even think about making the wrong decision,” she writes in her new book.

Many NewsHour readers said they began cooking meals at home more regularly during the pandemic and want to keep it up. Lori Pingatore, 50, of St. Paul, Minnesota, said she stocked her pantry with nonperishable staples and started cooking at home “100 percent of the time.”

“I deeply enjoyed that,” she said, and she plans to stick with it.

Cooking meals at home is often (though not always) healthier and cheaper than dining out or ordering in. Other readers discovered the convenience of grocery delivery and plan to continue shopping for foodstuffs online.

For those who do start dining out again, “out” may be the operative word. Based on her observations from Boston, Krieger predicts we won’t soon forget the joys of eating al fresco. 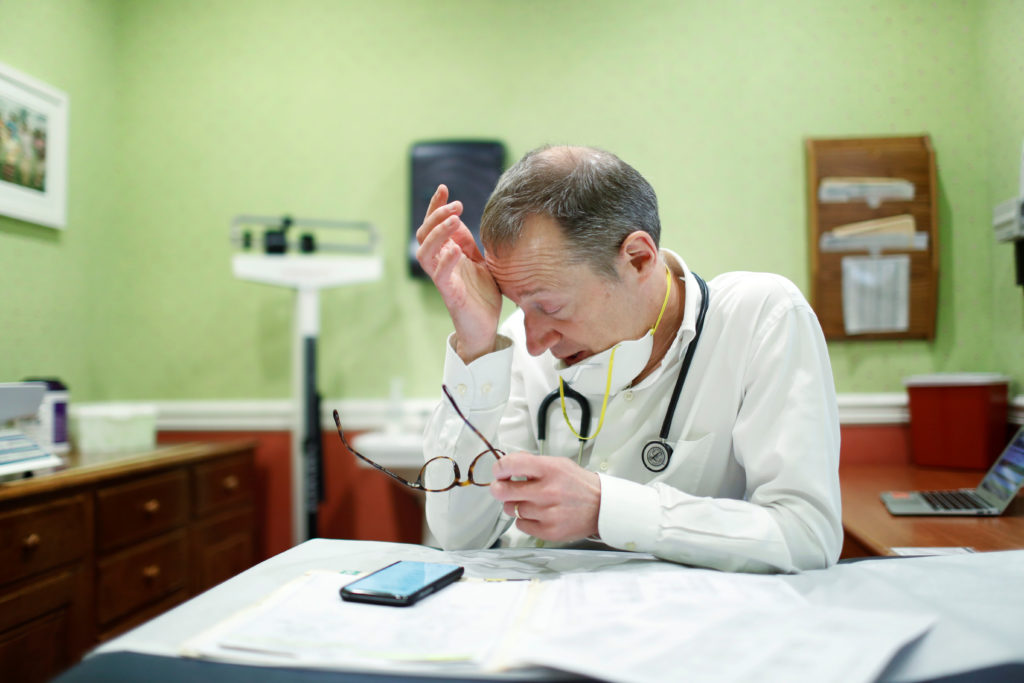 Going to the doctor, without going anywhere

It’s possible that the biggest health crisis to hit the country could indirectly lead to better health outcomes in the future. For years, telehealth services were slowly growing but remained a very small part of the U.S. health care system. That changed during the early months of the pandemic when people were afraid to sit together in enclosed spaces, like waiting rooms at doctors’ offices. As the nation scrambled to prevent COVID-19 outbreaks, hospital and clinic staff discouraged non-emergency visits.

Facing a possible tsunami of neglected health care, dire outcomes and smaller medical systems descending into bankruptcy, officials approved regulatory waivers that made insurance companies reimburse health care offered via telemedicine at the same rates as services offered in-person. More providers began to offer services via secure video chat for the first time and at high volumes, and millions of Americans benefited from the newfound convenience of expanded access to health care.

“The pandemic was this sentinel event that was going to change everything in health care delivery,” said Lori Uscher-Pines, a senior policy researcher at the RAND Corporation who studies telehealth and maternal and child health. Data shows there were fewer no-shows and appointment cancellations during the pandemic, she added.

The public health emergency drove efforts to expand telemedicine, but if telemedicine is to last beyond COVID-19, institutions such as insurance companies need to agree to reimburse virtual services at the same rate as in-person visits, said Uscher-Pines.

“It’s clear that millions of Americans have started using telemedicine services and started appreciating its benefits,” she said, “but what’s not clear is whether providers are going to continue to offer it if some of these policy changes don’t remain in place.” 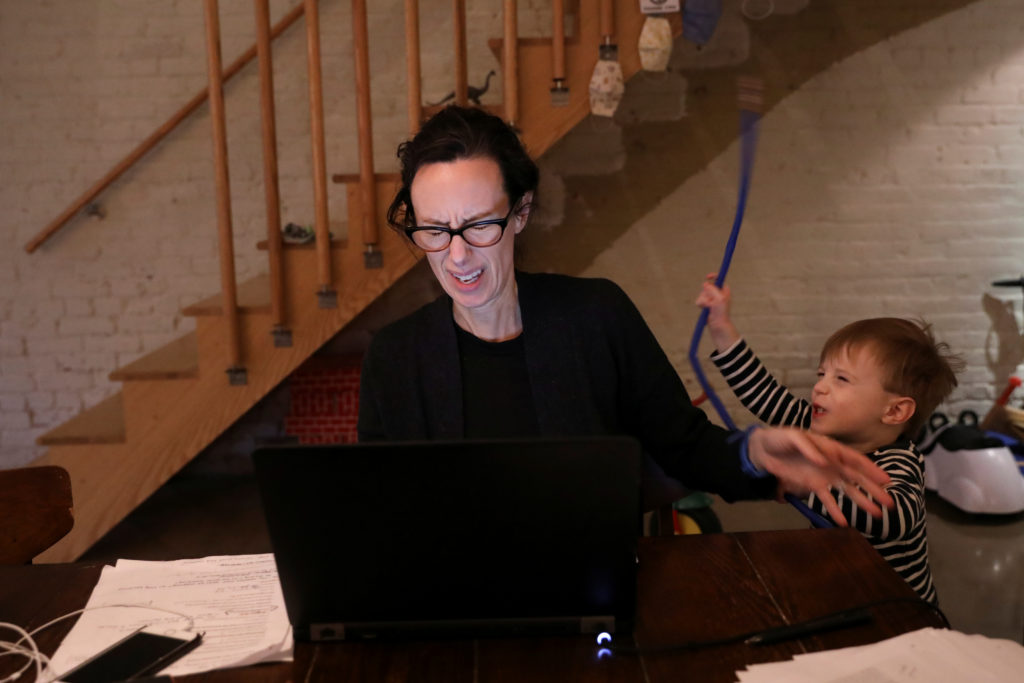 FILE PHOTO: The coronavirus pandemic forced society to conduct an experiment that led to millions of people working from home, a move that might not have been tried otherwise. REUTERS/Caitlin Ochs

Home is where the office is

What these behavior changes show is the revelatory potential of breaking your normal routines, Willems said.

In 2014, London Underground transit workers went on strike. For two days, the protest closed about two-thirds of the city’s stations, disrupting daily commutes for millions of people. But the sudden loss of routine forced many people to rethink their routes, said Willems, who explored how the strike influenced transportation patterns in a 2017 study published in the Quarterly Journal of Economics.

Analyzing passenger data, Willems and his colleagues estimated that 5 percent of people changed their daily routes after the strike ended, likely making their daily trips more efficient and better on balance. Those passengers could have improved their commutes at any time, the researchers wrote, but it took the strike to break them out of the hypnotically predictable rhythms of daily life.

According to Willems, the pandemic’s forced experiment revealed one radical change that may have improved daily life for many people: working from home.

Among employed U.S. adults who had been working from home during the pandemic, about half said they would like to continue to do so, according to a December survey from the Pew Research Center. In that report, 38 percent of U.S. workers who did their jobs remotely said most of their work could be completed at home, but people with lower-income jobs were less likely than those with higher income jobs to say they had the option to work from home.

Willems cited a U.K. survey in which about half of respondents said they were as efficient working from home as they were when they commuted to their offices. Another 29 percent said they became more efficient.

Even if “we’re doing quite well in the world,” Willems said, “it might be that there is some radical, better solution out there somewhere.”