Battles between the U.S. House of Representatives and the executive branch have made headlines and history in recent months. Yet perhaps the strangest event that ever occurred in the House chamber of the Capitol harkens all the way back to 1848. And it involved a man who represented both branches during his long political life.

Feb. 21 is the day Rep. John Quincy Adams of Massachusetts suffered a fatal stroke. He was, of course, also a former senator and the sixth president of the United States, but he spent the years 1831 through 1848 years as a congressman after losing his reelection bid to Andrew Jackson.

Thanks to the intrepid efforts of the Office of the Historian of the U.S. House of Representatives and professor Lynn Hudson Parsons of the State University of New York at Brockport, we have an excellent view of what happened on that February day 172 years ago.

There was no request to seek treatment in a hospital, since those institutions were still primarily inhabited by the poor and incurables.

Adams — or “Old Man Eloquent,” as he was known to his peers — was at his desk. Adams appeared to be in good spirits and even signed a few autographs for some of the younger congressmen who revered the great man.

A few moments later, the House took up a resolution honoring the U.S. Army officers who served in the Mexican-American War. Long a vehement critic of this war, Adams loudly shouted, “No!” amid a swell of “Ayes” from his peers.

Adams then rose from his seat to answer a question from the speaker of the House, Robert C. Winthrop, but his body revolted and he staggered back to his desk. He fell into the arms of the congressman sitting next to him, Ohio Rep. David Fisher.

Adams attempted to say a few words but could not. A newspaper reporter high up in the press gallery described the former president’s face as “covered with a deathlike pallor, water streamed from his eyes and nose.”

Other observers shouted for some help to be administered to the stricken man. Even though medicine of this era was still a risky business, at least there was one member-physician on the floor that day: Ohio Rep. George Fries. The doctor immediately ran to the old man’s side and gave the rather innocuous orders, “Stand back! Give him some air! Remove him from the chamber!” Rep. Joseph Grinnell of Massachusetts somehow secured a bucket of ice water and threw it on Adams’ face.

It wouldn’t help: The former president had suffered what was then known as an apoplectic fit and what doctors would today refer to as a cerebral hemorrhage. In common parlance, he had a massive stroke.

Winthrop ordered the House be adjourned and asked some of the stronger congressmen to move one of the chamber’s heavy, upholstered sofas into the Capitol Rotunda and place Adams on it. The idea was to open the large, heavy doors of the Capitol building and bring a gust of fresh air for the ailing former president. Alas, it was a brutally cold day in February and the wind was too harsh to do Adams much good. Winthrop then ordered the sofa (and Adams) be brought into his suite of offices. 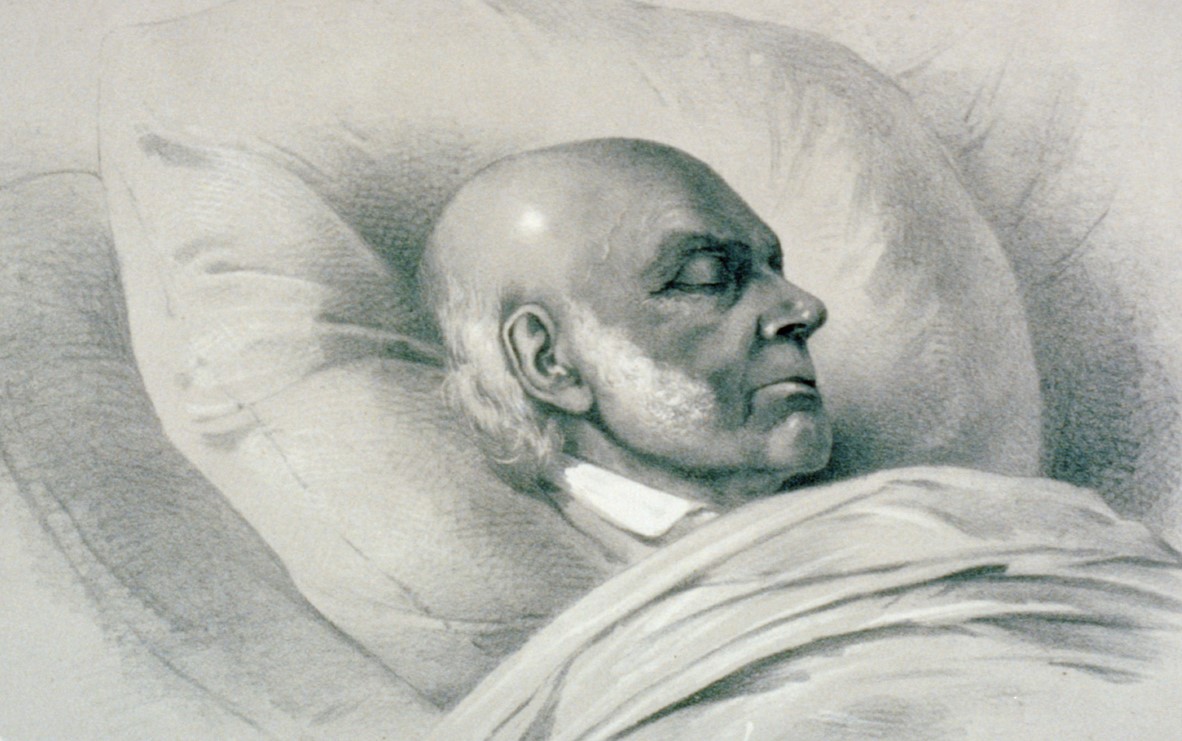 John Quincy Adams sketched by Arthur J. Stansbury, a few hours before his death in 1848. Lithograph by Sarony & Major. Courtesy Library of Congress

Doctors rushed to administer a battery of 19th-century treatments — ranging from mustard poultices to massive bloodletting and cupping on Adams’ temples and the back of his neck — that unsurprisingly failed to work. There was no request to seek treatment in a hospital, since those institutions were still primarily inhabited by the poor and incurables. Indeed, no one of means at that time would be caught dead in a hospital bed.

This was hardly the former president’s first serious brush with death. Only two years earlier, in 1846, at the age of 78, Adams suffered a stroke that left him partially paralyzed. By sheer determination and personal will, he somehow recovered, and after several months of recuperation, he resumed his full duties in Congress. Indeed, when Adams had returned to the chamber after his first stroke, every member of Congress on the floor stood and cheered.

According to the U.S. Centers for Disease Control and Prevention, each year more than 795,000 Americans suffer from a stroke and for roughly 610,000 of them, it is the first such event. About 185,000 people who have a stroke this year — about 25 percent — have already had a previous stroke, just like Adams. Nearly 90 percent of these strokes are ischemic cerebrovascular events, meaning they are caused by a blockage preventing blood flow to the brain.

A fascinating historical wrinkle to this story is that Samuel Morse’s new “magnetic telegraph” had been installed in the Capitol just a few years before, so that journalists could file stories more quickly and accurately. It is because of Morse’s incredible invention — the mass communications giant of its day — that we have such a wealth of these newspaper accounts for reference.

And to the throng of reporters and politicians in the room, Adams — the man some scholars have lauded as the most intelligent chief executive ever to reside in the White House — muttered one last elegant phrase: “This is the last of earth, but I am composed.”