ROME — With confirmed coronavirus cases in the U.S. hitting 5 million Sunday, by far the highest of any country, the failure of the most powerful nation in the world to contain the scourge has been met with astonishment and alarm in Europe.

Perhaps nowhere outside the U.S. is America’s bungled virus response viewed with more consternation than in Italy, which was ground zero of Europe’s epidemic. Italians were unprepared when the outbreak exploded in February, and the country still has one of the world’s highest official death tolls at 35,000.

But after a strict nationwide, 10-week lockdown, vigilant tracing of new clusters and general acceptance of mask mandates and social distancing, Italy has become a model of virus containment.

“Don’t they care about their health?” a mask-clad Patrizia Antonini asked about people in the United States as she walked with friends along the banks of Lake Bracciano, north of Rome. “They need to take our precautions. … They need a real lockdown.”

Much of the incredulity in Europe stems from the fact that America had the benefit of time, European experience and medical know-how to treat the virus that the continent itself didn’t have when the first COVID-19 patients started filling intensive care units.

Yet, more than four months into a sustained outbreak, the U.S. reached the 5 million mark, according to the running count kept by Johns Hopkins University. Health officials believe the actual number is perhaps 10 times higher, or closer to 50 million, given testing limitations and the fact that as many as 40% of all those who are infected have no symptoms.

“We Italians always saw America as a model,” said Massimo Franco, a columnist with daily Corriere della Sera. “But with this virus we’ve discovered a country that is very fragile, with bad infrastructure and a public health system that is nonexistent.”

With America’s world’s-highest death toll of more than 160,000, its politicized resistance to masks and its rising caseload, European nations have barred American tourists and visitors from other countries with growing cases from freely traveling to the bloc.

France and Germany are now imposing tests on arrival for travelers from “at risk” countries, the U.S. included.

“I am very well aware that this impinges on individual freedoms, but I believe that this is a justifiable intervention,” German Health Minister Jens Spahn said last week.

Mistakes were made in Europe, too, from delayed lockdowns to insufficient protections for nursing home elderly and critical shortages of tests and protective equipment for medical personnel. 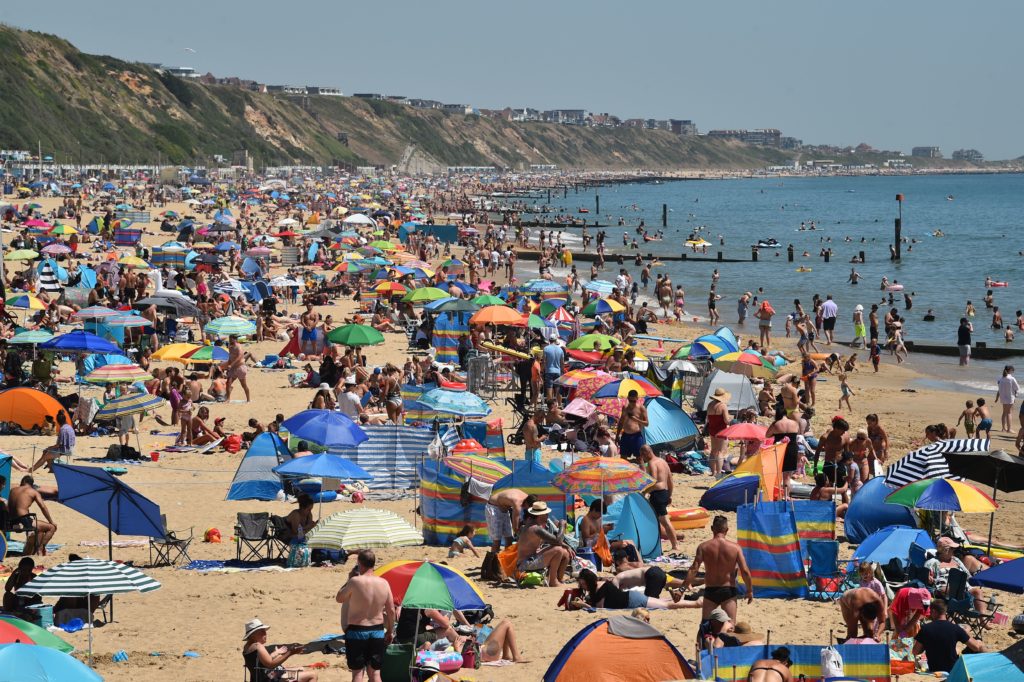 Beachgoers enjoy the sunshine as they sunbathe and play in the sea on Boscombe beach in Bournemouth, southern England, on June 25, 2020. Photo by Glyn Kirk/AFP via Getty Images.

The virus is still raging in some Balkan countries, and thousands of maskless protesters demanded an end to virus restrictions in Berlin earlier this month. Hard-hit Spain, France and Germany have seen infection rebounds with new cases topping 1,000 a day, and Italy’s cases inched up over 500 on Friday. Britain is still seeing an estimated 3,700 new infections daily, and some scientists say the country’s beloved pubs might have to close again if schools are to reopen in September without causing a new wave.

Europe as a whole has seen over 207,000 confirmed virus deaths, by Johns Hopkins’ count.

In the U.S., new cases are running at about 54,000 a day — an immensely high number even when taking into account the country’s larger population. And while that’s down from a peak of well over 70,000 last month, cases are rising in nearly 20 states, and deaths are climbing in most.

In contrast, at least for now Europe appears to have the virus somewhat under control.

“Had the medical professionals been allowed to operate in the States, you would have belatedly gotten to a point of getting to grips with this back in March,” said Scott Lucas, professor of international studies at the University of Birmingham, England. “But of course, the medical and public health professionals were not allowed to proceed unchecked,” he said, referring to Trump’s frequent undercutting of his own experts. 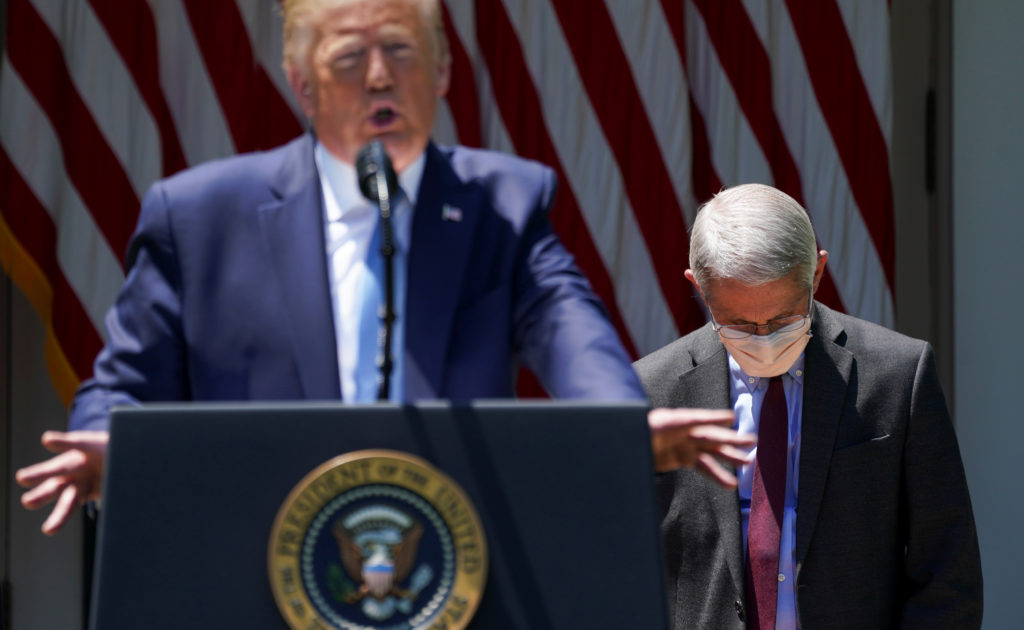 National Institute of Allergy and Infectious Diseases Director Dr. Anthony Fauci looks down as U.S. President Donald Trump speaks about administration efforts to develop a coronavirus disease (COVID-19) vaccine in the Rose Garden at the White House in Washington, U.S., May 15, 2020. Photo by Kevin Lamarque/Reuters.

When the virus first appeared in the United States, Trump and his supporters quickly dismissed it as either a “hoax” or a virus that would quickly disappear once warmer weather arrived. At one point, Trump suggested that ultraviolet light or injecting disinfectants would eradicate the virus. (He later said he was being facetious).

Trump’s frequent complaints about Dr. Anthony Fauci have regularly made headlines in Europe, where the U.S. infectious-disease expert is a respected figure. Italy’s leading COVID-19 hospital offered Fauci a job if Trump fired him.

Trump has defended the U.S. response, blaming China, where the virus was first detected, for America’s problems and saying the U.S. numbers are so high because there is so much testing. Trump supporters and Americans who have refused to wear masks against all medical advice back that line.

‪“There’s no reason to fear any sickness that’s out there,” said Julia Ferjo, a mother of three in Alpine, Texas, who is “vehemently” against wearing a mask. ‪Ferjo, 35, teaches fitness classes in a large gym with open doors. She doesn’t allow participants to wear masks.

‪“When you’re breathing that hard, I would pass out,” she said. “I do not want people just dropping like flies.”

And health officials watched with alarm as thousands of bikers gathered Friday in the small South Dakota city of Sturgis for an annual 10-day motorcycle rally. The state has no mask mandates, and many bikers expressed defiance of measures meant to prevent the virus’s spread.

Dr. David Ho, director of the Aaron Diamond AIDS Research Center at Columbia University Irving Medical Center, who is leading a team seeking treatments for COVID-19, decried such behavior, as well as the country’s handling of the virus.

“There’s no national strategy, no national leadership, and there’s no urging for the public to act in unison and carry out the measures together,” he said. “That’s what it takes, and we have completely abandoned that as a nation.”

When he gets on Zoom calls with counterparts from around the globe, “everyone cannot believe what they’re seeing in the U.S. and they cannot believe the words coming out of the leadership,” he said.

Even the European Commission president, Ursula von der Leyen, has taken the unusual step of criticizing the U.S. when she urged Washington to reconsider its decision to break ties with the WHO. She also issued veiled criticism of U.S. efforts to buy up stocks of any vaccine that might prove effective, vowing the EU will work to provide access to everyone “irrespective of where they live.”

Many Europeans point proudly to their national health care systems that not only test but treat COVID-19 for free, unlike the American system, where the virus crisis has only exacerbated income and racial inequalities in obtaining health care.

“The coronavirus has brutally stripped bare the vulnerability of a country that has been sliding for years,” wrote Italian author Massimo Gaggi in his new book “Crack America” (Broken America), about U.S. problems that long predated COVID-19.

Gaggi said he started writing the book last year and thought then that the title would be taken as a provocative wake-up call. Then the virus hit.

“By March the title wasn’t a provocation any longer,” he said. “It was obvious.”

Left: People wear masks as they walk along the side walk during the outbreak of the coronavirus disease (COVID-19) in Del Mar, California, U.S., July 30, 2020. Photo by Mike Blake