WASHINGTON — The White House on Monday urged all older Americans to stay home and everyone to avoid crowds and eating out at restaurants as part of sweeping guidelines meant to combat an expected surge of coronavirus cases.

President Donald Trump, in a marked shift in tone about a crisis that has enveloped the globe, for the first time acknowledged that the pandemic may send the U.S. economy into a recession and suggested that the nation may be dealing with the virus until “July or August.”

The guidelines, which would rewrite the norms of American society for half a month, were released as the U.S. government tried to blunt the impact of an expected surge of coronavirus cases, racing to bolster testing and aid even as the financial markets tumbled.

Among the new recommendations: Over the next 15 days, Americans should not gather in groups of more than 10 people, schooling should be at home and discretionary travel and social visits should be avoided. If anyone in a household tests positive for the virus, everyone who lives there should stay home. The administration did not define what an an older American was in terms of the recommendation to stay home.

“We will rally together as one nation and we will defeat the virus,” Trump said. “We can turn the corner and turn it quickly.”

The president, in an appearance in the White House briefing room, when asked when the pandemic would subside, said that “if we do a really good job” the crisis could pass by the height of summer. That was a far less optimistic take than in his earlier predictions that it could be over within weeks. He also acknowledged that the virus, which has battered the global markets, may send the nation’s economy into a recession, a potentially brutal blow for an incumbent in an election year.

Trump was unusually somber about the matter after playing it down for weeks. He acknowledged the pandemic was “not under control” in the United States or globally but said he did not yet plan to call for domestic travel restrictions and said he was reluctant to advise states to cancel the primary elections ahead.

Without providing details, he said “we’re going to back the airlines 100%,” a note of reassurance for an industry crippled by travel bans and fears of spreading the virus.

The expansive guidelines were issued on a day of fast-moving developments in a capital resplendent in cherry blossoms but awash in anxiety.

Congress convened to try to finish an aid package and consider another one behind it. The Supreme Court postponed oral arguments for the first time in over a century. And the U.S. surgeon general said that the United States is about where Italy was two weeks ago in the coronavirus struggle, a sign that infections are expected to rise.

“When you look at the projections, there’s every chance that we could be Italy,” Surgeon General Dr. Jerome Adams told Fox News. Yet he said the U.S. has opportunities to mitigate the pandemic.

Two weeks ago, Italy had 1,700 cases of coronavirus and had reported 34 deaths. Now, Italy is reporting an estimated 25,000 cases and more than 1,800 deaths. About 3,800 cases have been reported in the United States and so far, more than 65 people have died from coronavirus. Although the numbers may not be directly comparable, the trajectory is, as Adams sees it.

Pres Trump's tone about coronavirus has COMPLETELY changed today. He is saying this could last until July, August or longer, there may be a recession, outbreak is not under control, & US healthcare systems may not have resources needed to treat all Americans who may need help.

The administration also alleged that a foreign disinformation campaign was underway aimed at spreading fear among Americans already spooked by the pandemic.

And on Monday, national security officials said there had been a cyber attack involving the computer networks of Health and Human Services, but the networks were operating normally. They didn’t detail the nature or scope of the problem or identify the foreign entity.

On Fox News, Adams claimed the U.S. has “turned the tide” on testing, a critical part of tracking and containing pandemics, but whether that is true remains to be seen. The U.S. effort has been hobbled by a series of missteps, including flaws with the testing kits first distributed by the federal government and bureaucratic hurdles that held up testing by private laboratories.

On Capitol Hill, a nearly empty House met to adopt a resolution to make what were described as technical changes to polish off a coronavirus response measure designed to speed testing for the virus and provide sick leave to workers kept home because of it. It went into recess before adopting the measure, however.

The measure is likely to pass the Senate this week, though the timing is uncertain. The 100 senators, with a few exceptions, were expected to gather Monday evening, despite the federal public-health guidelines prohibiting large gatherings.

Talks are already underway on another bill to try to blunt the damage the virus is doing to the economy. Senate Majority Leader Mitch McConnell said it will focus on direct financial help to individuals, help for businesses such as the airline industry, and further steps to support the health system.

Nearby, the Supreme Court said it is postponing arguments for late March and early April because of the coronavirus, including a round over subpoenas for Trump’s financial records. The last time oral arguments were postponed was in 1918, due to the Spanish flu epidemic. In 2001, they were relocated, but not postponed, after an anthrax scare.

Larry Kudlow, director of the National Economic Council, said the White House is working toward $800 billion in fiscal relief, with about half of that having been approved through executive actions and legislation and much of the remainder being sought through a payroll tax cut that has been met coolly by both parties in Congress.

The Federal Reserve said Sunday it was taking emergency action to slash its benchmark interest rate to near zero. But the Fed’s move did not calm markets. The Dow Jones Industrial Average finished Monday down nearly 3,000 points. 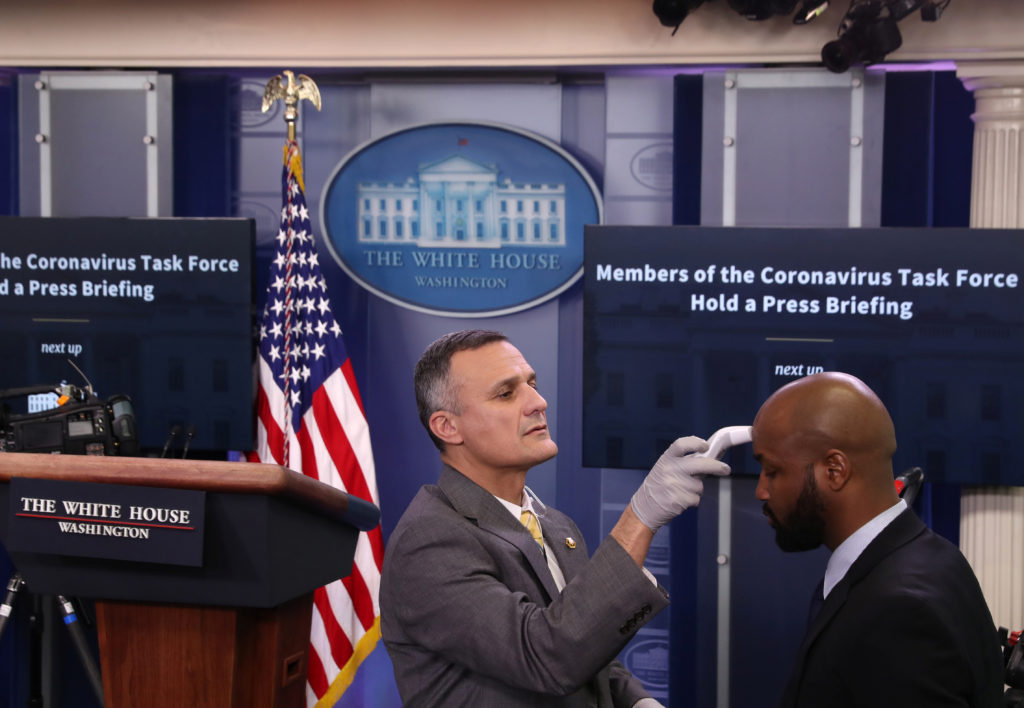 Staff from the White House Physician’s Office screen staff and members of the news media for fever or other COVID-19-related symptoms in response to the COVID-19 pandemic in the press briefing room at the White House in Washington, US, March 16, 2020. REUTERS/Leah Millis

The vast majority of people recover. According to the World Health Organization, people with mild illness recover in about two weeks, while those with more severe illness may take three weeks to six weeks to recover.

The worldwide outbreak has sickened about 175,000 people and left more than 6,700 dead.

Trump in recent days has imposed sweeping travel restrictions for much of Europe. On Saturday, he added Britain and Ireland to a list of countries facing travel restrictions over the next 30 days. The State Department on Sunday said it would allow U.S. personnel to leave their diplomatic or consular posts worldwide if they or family members were medically determined to be at a higher risk of falling very ill if exposed to the virus.

Coronavirus outbreak is ‘a time of sacrifice for all of us’