What Biden can do to fight COVID-19 before Inauguration Day

When news broke that President-elect Joe Biden won the 2020 election, Dr. Abraar Karan was treating patients diagnosed with the coronavirus. During his weekend shift, his patients weren’t asking him who won or lost, said Karan, an internal medicine doctor at the Brigham and Women’s Hospital and Harvard Medical School in Boston. Fatigued and short of breath, they desperately wanted to know how to get better, he said.

“Politics really leaves the room when you’re sick,” Karan said. But the moment he steps out of a patient’s room, “I enter back into a world where health is super-politicized.”

Recently, Karan has treated a rising number of COVID-19 patients, and said he knows this winter will likely produce a brutal increase in daily infections and deaths. The mixed messages that people have heard from the Trump White House confused people and stifled efforts to get the U.S. back on track, he said. But as a physician on the front lines of the crisis, he said he’s encouraged that the Biden transition team already selected an advisory board to craft a national strategy to combat the coronavirus pandemic.

In his first working remarks after being declared the winner of the 2020 election, President-elect Joe Biden said he would launch a group of scientists and public health experts to inform the nation’s COVID-19 response. On Monday, his transition team named a 13-member advisory board to help the new administration develop and implement policies and practices around the pandemic when he takes office.

Months before Inauguration Day, COVID-19 has tightened its hold on the U.S., which surpassed 10 million confirmed infections on Monday, according to data from Johns Hopkins University, and shows no sign of letting up. As temperatures drop and more people move activities indoors, the risk of exposure could make cases surge further if unchecked by masks, social distancing and ventilation.

Given the nation’s inadequate testing capacity several months into the pandemic, experts say the data still under-represents the pervasiveness of this virus. By the end of this year, if policy doesn’t change, computer models from the Institute for Health Metrics and Evaluation predict the U.S. death toll will reach 328,000.

It doesn’t help that Americans have been hearing mixed messages from the Trump administration for months, said Ambassador Mark Dybul, professor of medicine at Georgetown University Medical Center who directs the Center for Global Health Practice and Impact. Fundamental public health strategies, such as the efficacy of wearing face masks or the question of who needs to get tested, have been blurred by politics and not informed by science, he said.

“It is very difficult to tell people to change what they have been told to do by authorities,” Dybul said. “It undermines trust even more and makes combatting the pandemic more difficult.”

Here’s a look at what health experts are expecting from Biden’s pandemic plans and the challenges they’ll face.

Who is on Biden’s COVID-19 advisory board?

Chaired by Dr. Vivek Murthy, a U.S. surgeon general during the Obama administration, Dr. David Kessler, Food and Drug Administration commissioner under the Clinton White House, and Dr. Marcella Nunez-Smith of Yale University, the board leans on the leadership of noted scientists, public health experts and clinicians to guide the president-elect’s decisions on the crisis.

That leadership is needed as the U.S. enters what is expected to be a season of rising cases amid the Trump administration’s “lackluster response,” said Dr. Joshua Sharfstein, physician, vice dean at Johns Hopkins Bloomberg School of Public Health and a former deputy FDA commissioner who oversaw the Obama transition team’s efforts for that agency.

Under a normal transition, Sharfstein said the incoming administration would have full access to and briefings from federal scientists about what challenges lie ahead. So far, Trump has not conceded the election and his campaign has launched a series of lawsuits in Pennsylvania, Georgia and Michigan to stop officials from counting votes. The new administration already faces an “uphill battle because the White House and the president himself have done a lot to undercut important scientific messages like wearing masks,” Sharfstein said.

In terms of the rising number of cases and deaths, “We could wind up in even more of a hole than we are now by the time of the inauguration,” he said. 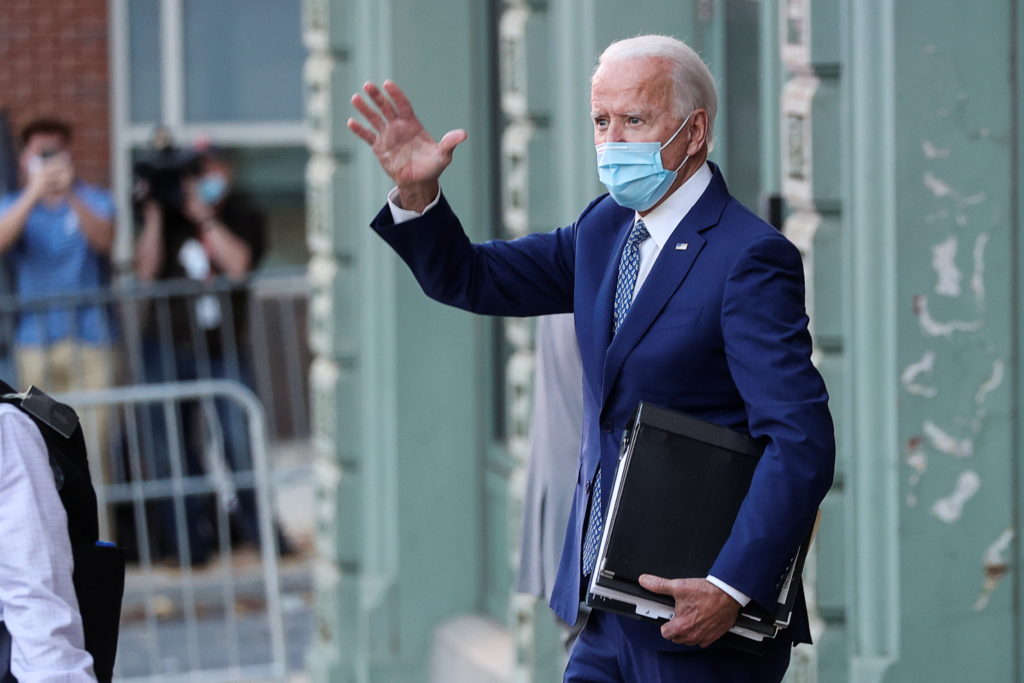 President-elect Joe Biden carries folders as he departs following briefings with members of his “Transition COVID-19 Advisory Board” in Wilmington, Delaware, on Nov. 9, 2020. Photo by REUTERS/Jonathan Ernst

How would the Biden administration respond to COVID-19?

Overall, the president-elect and his administration will “listen to science,” make decisions about how to respond to the pandemic based on public health expertise, and “promote trust, transparency, common purpose, and accountability in our government,” according to the transition team’s website.

To that end, the incoming administration laid out a seven-point plan to respond to the coronavirus.

What can Biden do before he is sworn in?

To regain control over the virus, Dybul said it is vital that national leadership direct a centralized response with a clear consistent message informed by science, “which is what we totally lack” currently.

But what the president-elect lacks at this moment in executive power, “he has in moral authority,” said George Washington University’s Dr. Leana Wen, an emergency physician and former Baltimore health commissioner.

To build on good will, members of his advisory board should publicly amplify what best practices need to be adopted by state and local governments in the absence of authorized federal leadership, she said.

She also said Biden could adopt the “21st-century equivalent of fireside chats,” directly talking to the American public because “his policies are not going to be effective if he cannot get the American people to follow his direction.”

Left: An attendant talks to a person waiting in their car at a coronavirus testing site in El Paso, Texas, as the state's attorney general sues to block local shutdown orders. (Photo by Cengiz Yar/Getty Images)