If you’ve recently found yourself struggling to find a COVID test and receive timely results, you are not alone. The panicked clamoring for pandemic essentials — vaccines, tests, masks — has come to define how millions of people in the United States have endured surges in COVID-19 cases — including omicron. Nearly two years into the pandemic, U.S. testing is still “100-percent haphazard,” said Dr. Michael Mina, an epidemiologist and physician.

The omicron surge has created an unsustainable workload for the nation’s testing infrastructure. In laboratories that process highly sensitive PCR tests, “we are right now running about three times more positive cases than we were running last winter,” said Jim Flanigan, executive vice president for the American Society for Clinical Laboratory Science. And that increase has gobbled up high-capacity analyzers (which are designed to only produce results for tests that match the analyzer’s brand), consumables, such as swabs and reagents, and workforce, according to Flanigan. There are enough lab technicians in the short term, but people are “burning out and quitting,” he said. No system can work well “in that kind of unexpected ramp-up,” Flanigan said. “Omicron is what broke the line.”

No system can work well “in that kind of unexpected ramp-up,” Flanigan said. “Omicron is what broke the line.”

Much like the country’s health care system itself, testing infrastructure in the U.S. is a patchwork of private and public networks. Even once the latest surge begins to recede, the pandemic’s ever-shifting demands mean goals must be established now to build up the country’s testing capacity for the future, experts say. Does the U.S. need to be indefinitely capable of processing tests at an omicron-like level? How would that be sustained over time? What about the next variant, or next pandemic?

And yet the nation has still made significant progress on this issue.

When President Joe Biden entered the White House one year ago, he said the U.S. was processing about 2 million tests in laboratories per day, not counting rapid or the emerging at-home tests. Since then, Biden has invoked the Defense Production Act to ramp up testing production, and the nation’s daily capacity for analyzing lab tests has grown to 15 million, according to the White House. In January alone, people in the U.S. also will use an estimated 375 million at-home rapid tests.

WATCH: Biden acknowledges toll of COVID on nation, but says ‘it will get better’

On Jan. 13, Biden announced that the U.S. would provide 1 billion free tests that people could receive at home by mail. The administration is also requiring private insurance companies to reimburse people for the purchase of up to 32 tests each month.

But in a country of 330 million people, the 1 billion tests Biden is mobilizing could be wasted quickly if not used strategically.

“If we don’t use it smart, it won’t do much,” said Mina, who recently left Harvard School of Public Health to become chief science officer at eMed, a telehealth company that verifies people’s COVID test results and connects them with prescription treatment. “I’m worried it’ll sap access to these tests.”

Mina sees some choices that the country could make to test the U.S. more thoroughly, have a better sense of where the virus is spreading and maximize what can quickly become limited – and precious – resources. 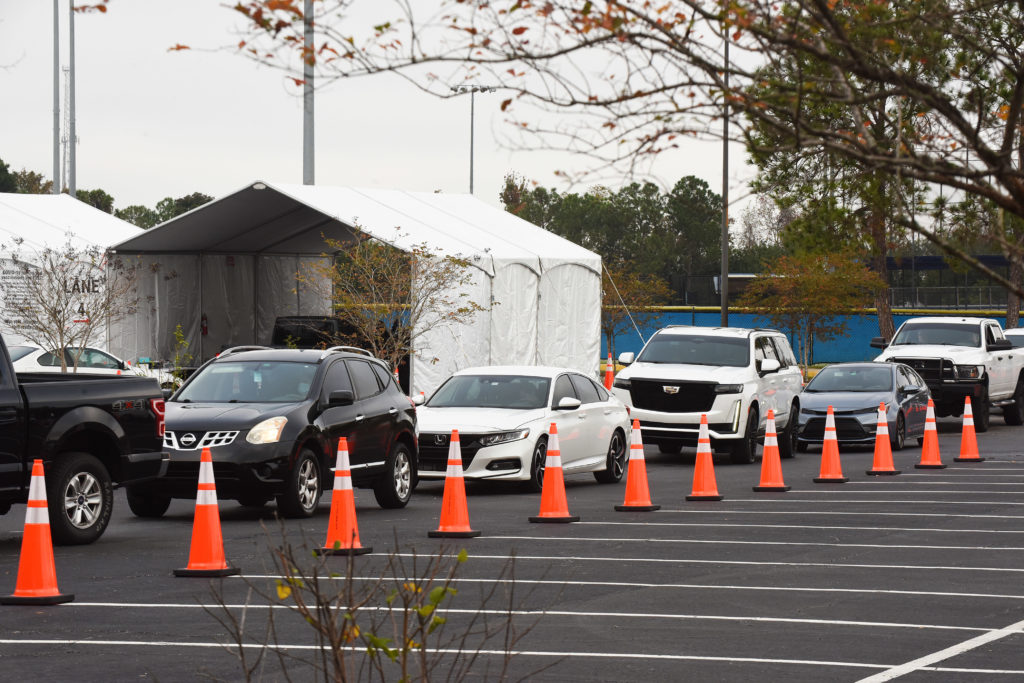 Cars line up at a COVID-19 testing site. Photo by Paul Hennessy/SOPA Images/LightRocket via Getty Images

How much testing should we do?

Getting the nation to conduct 20 million tests each day – up from the current 15 million – would enable the U.S. to monitor for new infections in nearly half of the country every week, Mina said. That would add up to 140 million tests over seven days.

“That’s not that crazy,” he said. “We definitely make more bottles of water than that.”

How should we test?

Mina also suggested that the country could consider doing more pool testing, which entails testing a bunch of samples together instead of running individual tests for individual people.

Not everyone needs to test every week, he said, but pooling rapid tests could mean up to 280 million people are testing weekly. And people in hot spots could test themselves more often – twice per week.

But pooling works when communities face low levels of infection, said Dr. Jennifer Nuzzo, an epidemiologist and senior scholar at Johns Hopkins University’s Center for Health Security. That means most pools would come back negative, and health workers could identify the few pools with positive cases and prevent further infection. 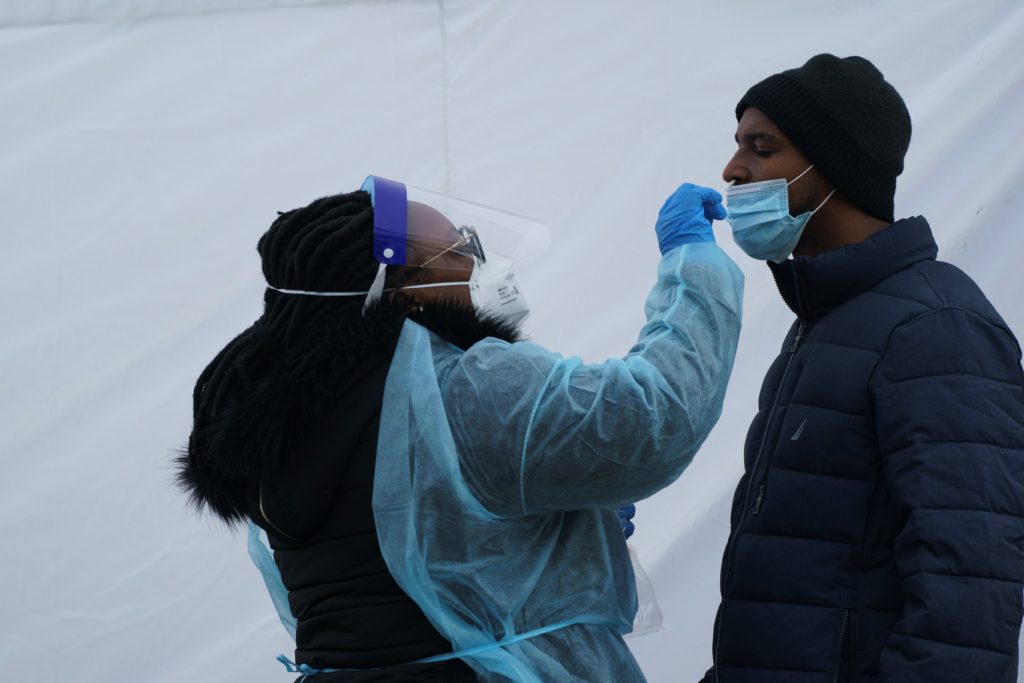 A medical worker takes a nasal swab sample from a man for COVID-19 testing in Washington, D.C., on Jan. 13, 2022. Photo by Ting Shen/Xinhua via Getty Images

At-home tests are useful because they are designed to do one task well – “catching infectious people,” according to Mina. In December, the FDA said that some tests were less sensitive in detecting the omicron variant early during infection and further evaluations were still underway. “For public health and transmission stoppage, we need a test that gives you real-time results so you can act,” he added. But at-home testing also presents limitations.

Up to now, one has been cost. As with most things, people with money have had an easier time finding test kits that cost more than $20. That expense has put potentially life-saving information out of reach for many people, who simply reported to work and hoped no one got sick.

On Tuesday, the White House soft-launched its website for people to order up to four test kits per household for free. But it is unclear exactly when all of these tests will arrive, how much it will help with the current surge, or if their distribution will be staggered in the months ahead. The move to require insurance reimbursement came amid concerns that insurance premiums would rise and people could run into cumbersome claims and initial denials. But the benefit does not help the uninsured.

Given the choice between empowering individuals with rapidly available test results versus adding steps and time by sending those results from a lab to the public health department, Dr. Jeanne Marrazzo, who directs the Division of Infectious Diseases and serves as professor of medicine at University of Alabama in Birmingham, said she prefers to put “the power in people’s hands” so they can then “take appropriate next steps.” But she also acknowledges that rapid at-home tests – an invaluable tool when laboratories are overburdened and unable to produce timely results – are not so straightforward. And there is always a risk that someone could test positive at home and keep it quiet.

Inadequate testing is a surveillance problem (health officials may not know how the virus is spreading in a timely way), but it’s also a bigger problem, Nuzzo said.

The medicine developed to limit pandemic suffering also relies on wise test distribution and use. Paxlovid, a Food and Drug Administration-authorized pill that treats COVID-19 at home, is most effective if administered as soon as a person shows symptoms. Without sufficient testing and timely results, patients who otherwise would have experienced good outcomes could be endangered by delays in getting them potentially life-saving medication, illustrating the “clinical dimensions of this testing mess that we’re in,” Nuzzo said.

“This is something we’ve been screaming about literally since the beginning of the pandemic.”

The U.S. will never reach a point in COVID-19 surveillance testing where every employee in every work space – roughly 160 million people – can test a few times each week to ensure that it is safe for all to work in person, Nuzzo said. “We’re nowhere near that.”

For much of the pandemic, people have had to purchase tests on their own, transport themselves to testing sites – a familiar pattern in U.S. health care. When systems fail, individuals are left to fill in the gaps, ultimately worsening existing disparities. Experts say the Biden administration’s over-reliance on vaccines as a pandemic strategy also blunted the urgency for leaders and the public to act on the need for testing before variants like delta and omicron emerged. But now the country must meaningfully reach beyond its “passive approach” in getting people tested for COVID, Nuzzo said.

On Jan. 6, she and other public health leaders sounded the alarm about the need for more aggressive tactics. In letters published in the journal JAMA, they pleaded for the U.S. to “invest in and maintain” public health infrastructure, including testing and surveillance, that could withstand future pandemics.

“Failure to address clearly observed weaknesses in the COVID-19 response will have preventable adverse health, social, and economic consequences when the next novel outbreak occurs,” they wrote.

With the U.S. again confounded by testing bottlenecks, what frustrates public health experts like Nuzzo most is that “this is something we’ve been screaming about literally since the beginning of the pandemic,” she told the PBS NewsHour. “I don’t know why there’s a reluctance to put forth a strategy.”