As COVID surges in New Orleans, every day is unpredictable for teachers and parents

NEW ORLEANS – It all started with an abrupt email Veronica Trotter received from her son’s school.

Just before Christmas break, Trotter, a dentist, and several of her co-workers’ with kids in the same school all got the same message: “Please pick your student up from school as soon as possible.” Someone in each of their children’s classes had tested positive for COVID. Several classes had to quarantine.

Then came the new year, and with it, a fresh COVID diagnosis of her own. After avoiding the virus for nearly two years, Trotter’s turn came. While symptoms began as mild, “by the next day, I felt like I was hit by a Mardi Gras float. It was horrible,” Trotter said. The single mother isolated in her room, speaking to her 7-year old son through the crack of the bedroom door. He had “difficulty understanding that COVID doesn’t mean death. It scares him really bad.”

Six days later, his class and others had a positive case, sending multiple classes home to quarantine. He’d been home for two days before the school emailed to say it was shutting down completely because of a growing number of cases and lack of staff.

WATCH: Hospitals near a breaking point with the latest influx of COVID patients

An email later that evening informed parents that things had “changed overnight as the remainder of our weekly COVID testing results came in. We are now faced with a critical shortage of key staff.” 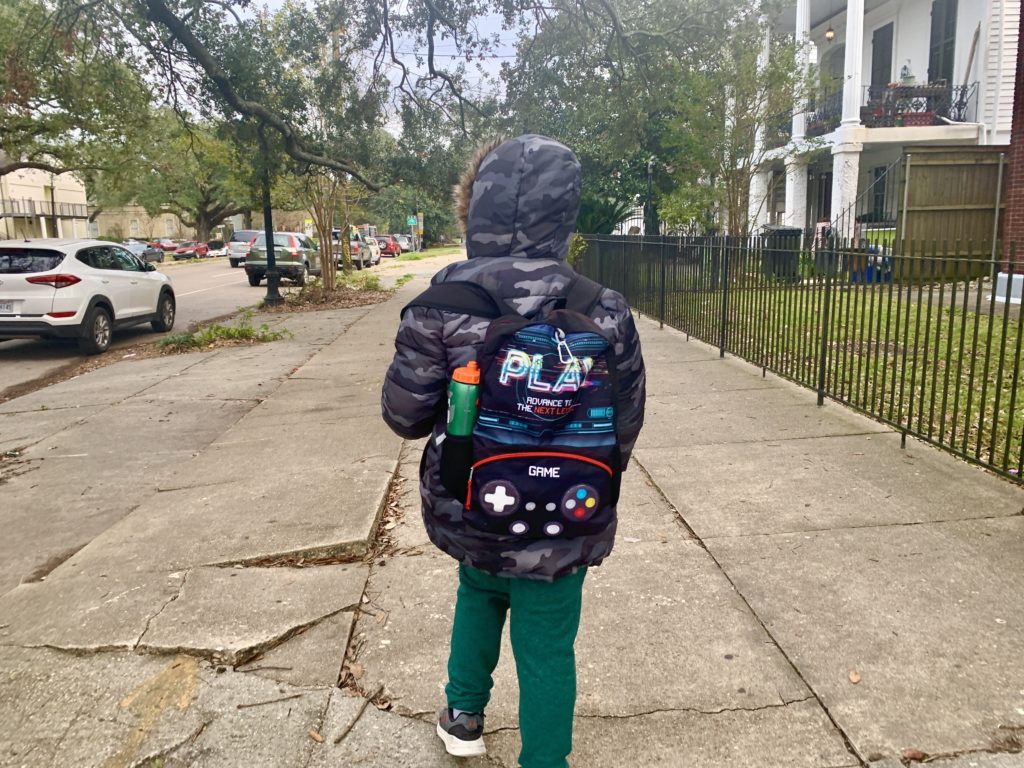 Normally packed with students, this sidewalk is empty as thousands of students are sent home to quarantine. Photo by Roby Chavez

Families and educators across the city are struggling with a wave of these closures as cases continue to climb — either because of student absences or because too many staff are out sick themselves. On Jan. 10, New Orleans Public Schools’ (NOLA-PS) COVID tracker showed the highest single-week total reported since the district began tracking cases in 2020.

Last week, 2,233 students and staff had active COVID cases at 81 of its 90 schools – more than all of the cases last school year. While the case numbers this week have fallen to 1,603, quarantines among staff and students increased to 3,764 out of school after being exposed to a positive case.

While the unique charter system in New Orleans allows school autonomy on school operations, NOLA-PS says all schools have agreed to collectively follow the district COVID recommendations, which do not entirely align with the CDC guidance for schools. For example, anyone testing positive must still isolate for 10 days. A spokesman for the public school system says, “We do go above the CDC’s recommendation of 5 days in an abundance of caution.”  It also differs from the state department of education recommendations which says Louisiana public school students won’t have to quarantine after COVID exposure. All of it has left confusion for parents and educators.

By Jan. 10, following Christmas break, nearly a dozen schools pivoted to all remote learning due to quarantines and staff shortages.

“It makes family decisions extremely difficult for a lot of people who are stuck between a rock and a hard place.”

As in many places across the country, school leaders, teachers, and parents all are focused on a singular question: How do we keep schools open and safe? In a rare news conference Wednesday, President Joe Biden acknowledged people’s COVID exhaustion but stressed much of the nation is a better place. “We are not closing schools,” he said, saying 95 percent of schools are open and acknowledging some have been slow to spend federal COVID dollars.

In New Orleans, where Hurricane Ida prompted additional closures or temporary relocation of entire schools at the start of the school year,  the reality is more complicated. Teachers are burned out from two years of virtual learning and false starts. Parents, some of whom have struggled to find or keep work, are sometimes choosing between their jobs and child care. Kids are trying to learn while also dealing with their own health and emotional stress.

This month, Louisiana has broken the single-day record of cases three times, peaking at 17,592 cases on January 12. The positive test rate is nearly 32 percent, leading to a struggle to keep schools open. Hospitalizations are 10 times higher than four weeks ago, increasing from 196 to 2,091. Ninety-two children are hospitalized. Most are unvaccinated.

“We have more children hospitalized today than we did at the height of the Delta peak. People who think this is harmless for children, it’s clearly not,” Gov. John Bel Edwards said during a news conference Thursday. “At some point, we will peak out in this surge as we have previously and come down the other side, but frankly, we’re not there yet.” 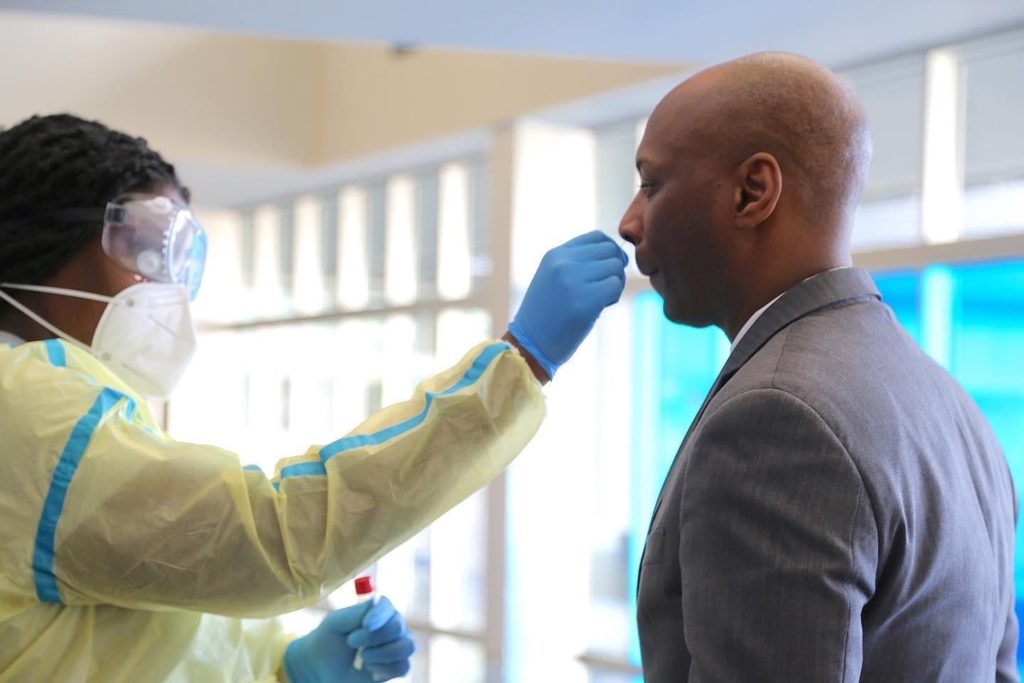 Superintendent of NOLA-PS, Henderson Lewis gets a routine COVID test with students and families as schools reopen following the latest surge. Photo by NOLA-PS Staff

The city in the last several weeks has introduced a wave of new measures to mitigate the virus’ spread, including a new indoor citywide mask mandate on Jan. 12. and vaccine requirements for anyone 5 years and older in schools, businesses, and restaurants. By February, all students will be required to be fully vaccinated. However, exemptions are available.

Louisiana has some of the broadest exemptions in the nation for students and parents who want to opt out of school immunization requirements. Exemptions are allowed for religious reasons, medical reasons, and even philosophical objections.

Along with the difficulties they pose for schools, closures are also leaving parents with few options, Trotter said.

“It makes family decisions extremely difficult for a lot of people who are stuck between a rock and a hard place,” Trotter said. “Businesses are still businesses, but parents still have to be parents. Stressful is an understatement. I’ve seen it in play. I’ve seen our sisters breaking down in the hallway crying because they don’t have anymore PTO [personal time off] left. They had to write a letter for me to pick their kid up and asked if I could bring them to my house. So I had to do that. It’s heartbreaking.”

City and school officials hope schools can stay open by increasing the pediatric vaccination rate and weekly testing. Though 81 percent of the city’s adult population is fully vaccinated, only a third (36 percent) of the city’s children have that same protection. Children younger than 5 years old cannot get the vaccines at all. 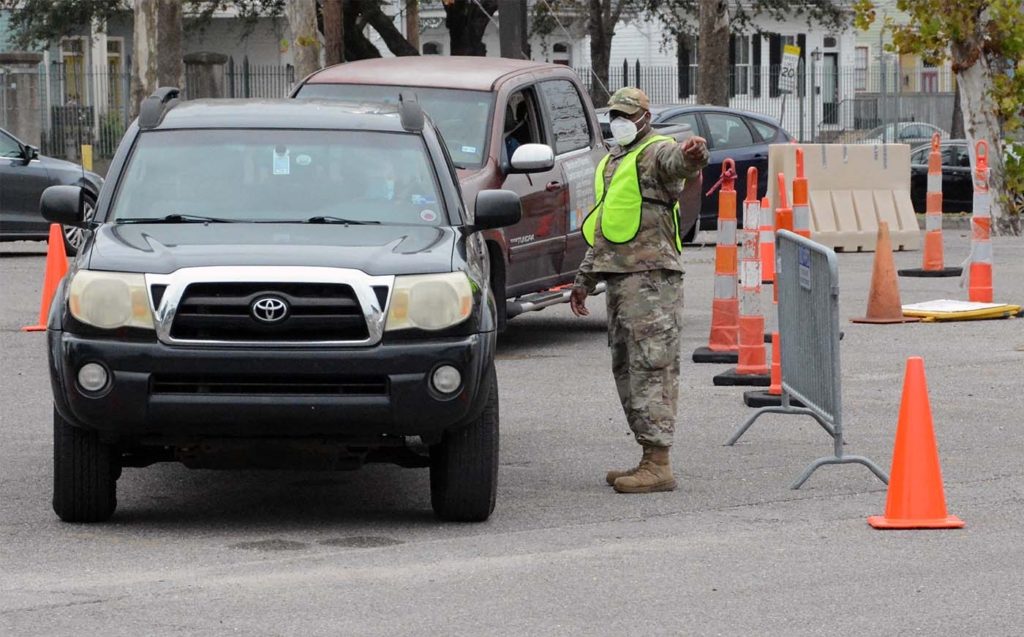 “More than 18,100 tests were administered between Jan. 1-7 with a positive test rate among those tested of approximately 13 percent,” district spokeswoman Taslin Alfonzo said in a press release. “The data will give our schools the most accurate information available for decision making and aid all our efforts to slow the spread of COVID-19 on school campuses and in our city.”  The school system did not issue a districtwide directive for distance learning as it did during previous surges.

READ MORE: Schools across the country are struggling to find staff. Here’s why

“We are doing our best as a school community to protect our students, teachers, and support staff and preserve in-person learning,” Lewis said. He cited the benefits, including interacting with teachers and peers.

The determination to keep kids in classrooms has teachers stressed and overworked. After the tremendous pressures of the past two years, some say they have nothing more to give and are feeling overlooked.

“It just kind of lets me know where teachers stand on the totem pole. They want people back at work. They want us back in the building,” said Yeashan Banks-Rogers, an elementary school special education teacher, said. An added complication for the eight-year veteran teacher is that some students with disabilities are not able to mask up. 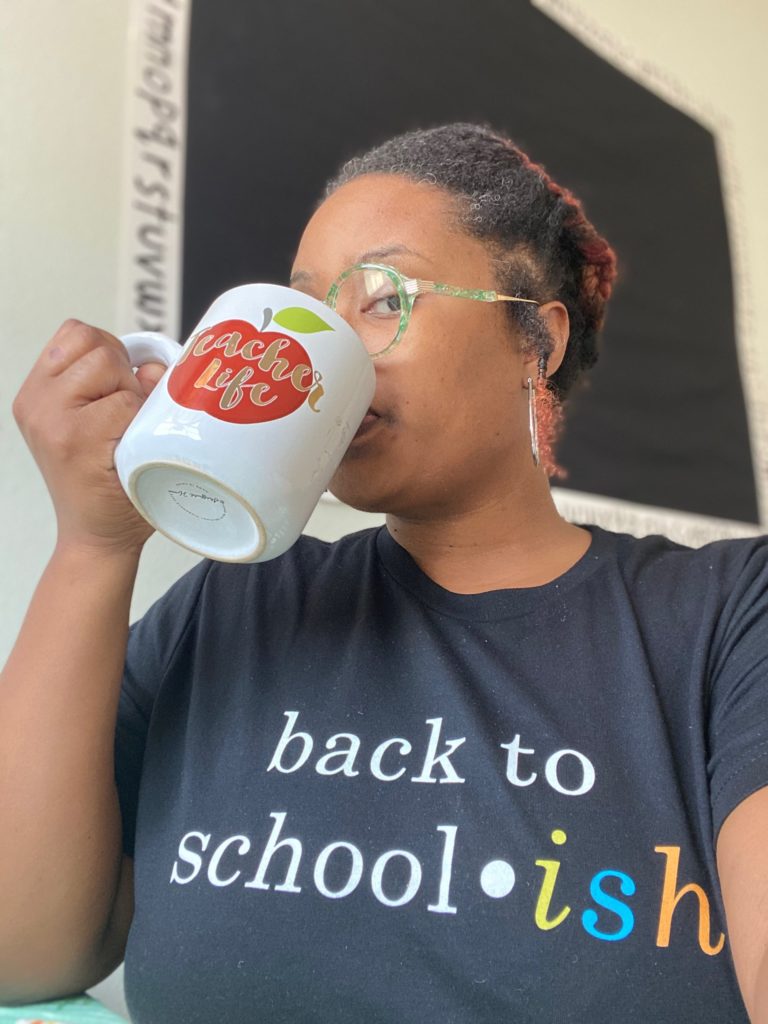 The determination to keep kids in classrooms has teachers like Yeashan Banks-Rogers, stressed and overworked. As the elementary school special education teacher takes a break from teaching, she is wearing a t-shirt that reads, “back to school-ish” as class quarantines grow. Photo courtesy of Yeashan Banks-Rogers.

“I am worried on a daily basis. I always say if I had a dime for every time I say mask on your nose or mask up, I’d be rich. It’s been tough because it does change how you interact with kids. It’s been harder to build relationships with students. Because you have to be so hands-off, it’s hard,” said Banks-Rogers, who is also a parent to two young children.

“If I had my choice of staying at home with my kids and struggling through virtual to be safe versus being in the building for the sake of business and keeping it open, I’m always going to choose health and safety over money, but that’s not the choice we’re given time and time again during the pandemic,” she added.

“I think the teacher shortage is going to increase because it’s not safe, and we’re not being protected the best way we should be.”

As the case numbers shattered records, the United Teacher of New Orleans (UTNO), the union of teachers and school employees, called on schools to do more to keep teachers safe. UTNO is recommending that schools switch to virtual learning if 15 percent of the students or teachers are out due to COVID. UTNO also wants bi-weekly testing for students and staff, and COVID compliance report cards for each school so that families and community members are clear about how each school is doing on COVID safety.

“The increasing spread of COVID-19 in New Orleans is worrying…We call on NOLA Public Schools and all New Orleans schools to continue these safety measures and expand on them,” a spokesperson said through a statement.

According to a recent survey, 48 percent of teachers admitted that they had considered quitting within the last 30 days. The number does not surprise Banks-Rogers, who taught at three schools during the pandemic. She says there is a significant disparity among the city’s charter schools.

“I’ve been able to see what it looks like at a privileged school and see what it’s like at a not-so-privileged school, so it’s been interesting to see how economics play into the pandemic and education,” Banks-Rogers said.“People are leaving the profession in droves. I think the teacher shortage is going to increase because it’s not safe, and we’re not being protected the best way we should be in all situations.” 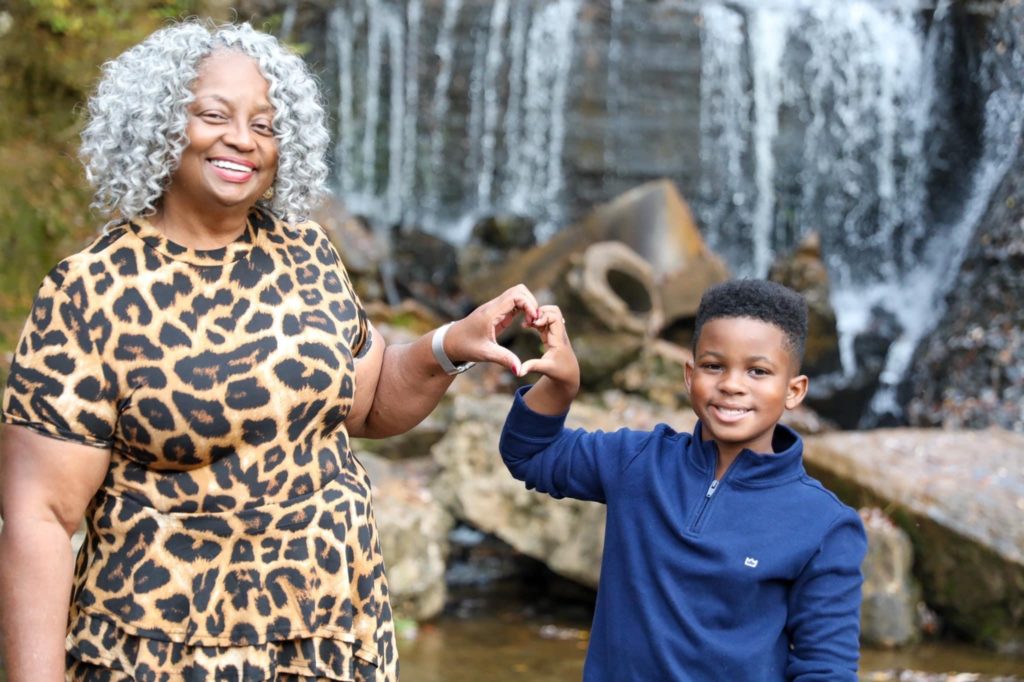 Frankie Trotter takes a photo with her grandson, Bentley. The second grader’s grandmother is caring for him in Mississippi as he quarantines from school and his mom recovers from Covid at home in Louisiana. Trotter Family photo.

Trotter says she ended up sending her son to stay with her mother in Mississippi until his school reopens. Three days ago, he was able to return to class for the first time in about a month. For parents, teachers, and students, it’s been a sobering first two weeks of a new year that has already lost its promise.

“I knew it was going to happen. I didn’t expect it to happen to me. I feel like my school has done all it could to keep kids in school, but it’s not safe to have them there if there isn’t enough staff at school. It’s disappointing, but I understand why it had to happen. It’s so frustrating.”