PHILADELPHIA — There are the new dead. And then there are the bodies waiting in overcrowded mortuaries to be buried as cities struggle to meet demand and families wrestle with rules on social distancing that make the usual funeral rituals impossible.

Med Alliance Group, a medical distributor in Illinois, is besieged by calls and emails from cities around the country. Each asks the same thing: Send more refrigerated trailers so that we can handle a situation we never could have imagined.

The company has rented all its trailers and there’s an 18-week wait for new materials to build more, she said.

With U.S. medical experts and even President Donald Trump now estimating the death toll from the coronavirus pandemic could reach 240,000 nationwide, the sheer practicalities of death — where to put the bodies — are worrying just about everyone as cities, hospitals and private medical groups clamor to secure additional storage.

The need is compounded by private mortuary space that is occupied longer than usual as people wait to bury their loved ones— regardless of how they died— because rules on social distancing make planning funerals difficult.

It’s a crisis being repeated worldwide. 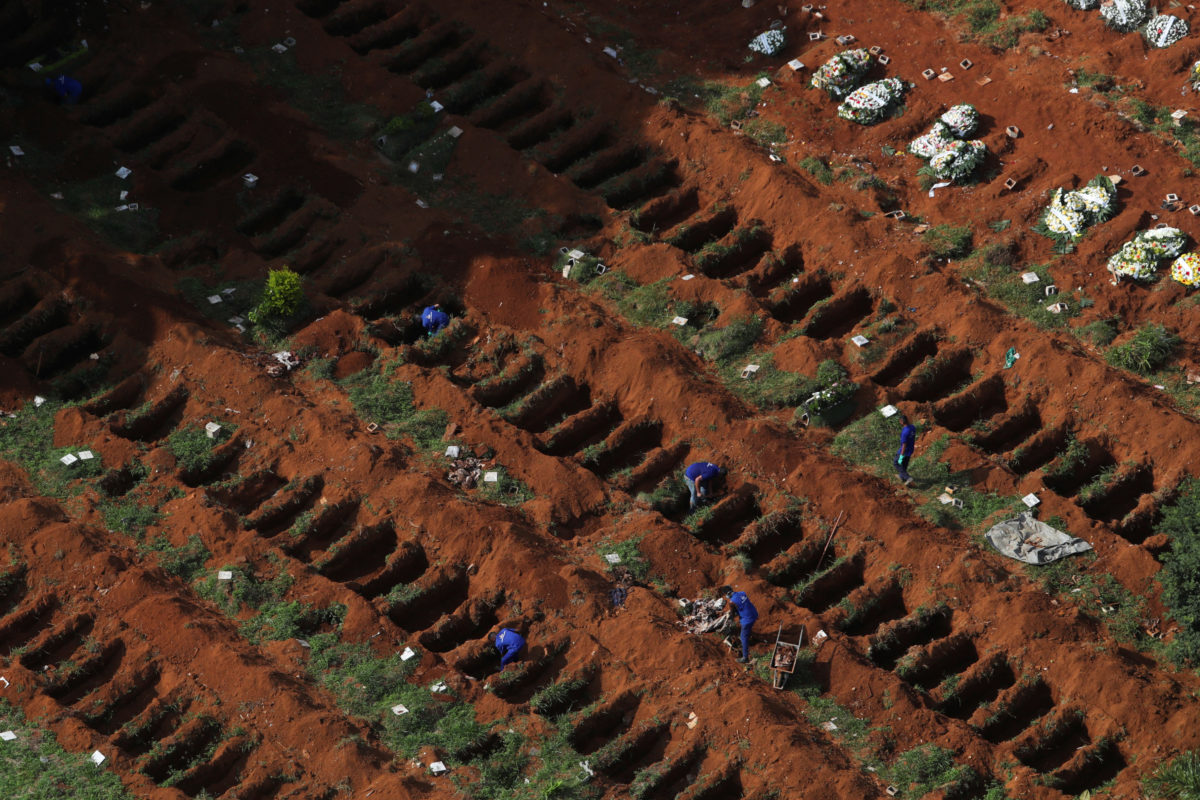 In Spain, where the death toll has climbed to nearly 12,000, an ice rink in Madrid was turned into a makeshift morgue after the city’s municipal funeral service said it could no longer take coronavirus bodies until it was restocked with protective equipment. In Italy, embalmed bodies in caskets are being sent to church halls and warehouses while they await cremation or burial.

And in the coastal Ecuadorian city of Guayaquil, macabre images and pleas from families on social media show dead loved ones wrapped in plastic or cloth, waiting for days to be taken away by overwhelmed morgue workers.

In the U.S. epicenter of New York City, where the death toll was nearly 1,900 on Saturday, authorities brought in refrigerated trucks to store bodies. At Brooklyn Hospital Center, a worker wheeled out a body covered in white plastic on a gurney and a forklift operator carefully raised it into a refrigerated trailer.

Cities and states that haven’t been hard-hit yet are trying to prepare for the worst.

It’s hard to say exactly how much morgue space is available nationwide. Many cities and counties submit emergency preparedness plans for review by state and federal officials, but tallies aren’t always complete and private mortuaries aren’t always included. Trade groups like the National Association of Medical Examiners don’t track those capacities either.

In Washington, D.C., which has a morgue that can hold about 270 bodies, officials said they would seek help from federal partners if needed. Dallas has a plan for refrigerated space as part of its emergency preparedness efforts. And Chicago is already using a trailer outside the medical examiner’s office for the bodies of coronavirus victims, and may use a refrigerated warehouse if needed.

On a daily basis, the system works at essentially full capacity in most jurisdictions, said Robert A. Jensen, co-owner of Kenyon International Emergency Services, a private disaster response company based in Texas.

“They’re not made for surge. They’re made to handle the daily numbers,” said Jensen, whose company has helped with mass fatality incidents from 9/11 to Hurricane Katrina to the 2004 tsunami in Thailand, all of which involved using refrigerated trucks to store bodies.

In Pennsylvania, the state coroner’s association is working to figure out resources and help with what will likely be regional planning.

Brian Abernathy, Philadelphia’s Managing Director, said the city had secured refrigerated trucks to help with any overflow storage needed for bodies. The city had reported 26 deaths as of Friday.

“This isn’t because we expect a large influx of people succumbing to the illness, but rather it’s likely that there will be fewer funerals, which will cause backups in both our city morgues as well as the hospital morgues,” Abernathy said.

Brian Murphy, the CEO of Arctic Industries, which manufactures walk-in coolers and quick-assemble modular structures in Miami and Los Angeles, said he is getting calls seeking help. In the past, most clients were from the food industry, but with restaurants shuttered, calls about mortuary needs have risen.

He says his company is prioritizing work related to COVID-19 and is considering working more hours to meet needs.

“Everything is very much in flux,” Murphy said.

The families of the dead, meanwhile, are making do.

Rosina Argondizzo of Glenview, Illinois, was buried in March with just a priest and four people present: her husband of 58 years, her son Peter, his wife and their son. Another son who lives in Italy didn’t travel. Peter Argondizzo said his 79-year-old mother, who died after contracting pneumonia and the flu, would have had a very different funeral in normal times.

David Dittman said he inquired about waiting to hold a funeral for his 94-year-old mother, Ruth, who died after battling cancer, so more family could attend.

But the funeral home handling arrangements in Connecticut didn’t want to hold the body for more than two weeks.

He said he understood: “Especially with this rush of people that may be coming at them. They may be overwhelmed, you know.”